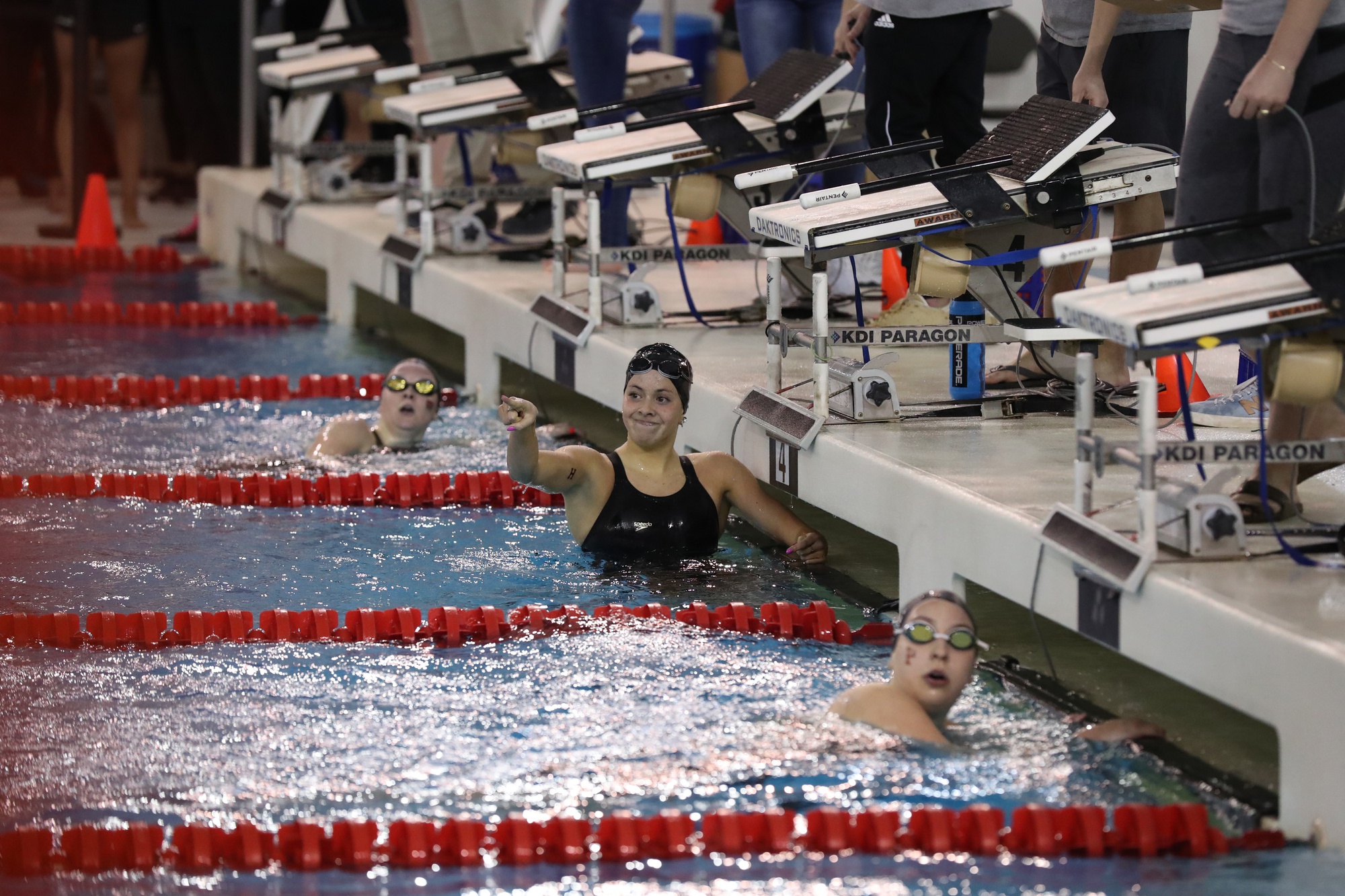 Seconds Ahead of Second: Felicia Pasadyn, Female Rookie of the Year

By Zing Gee, Crimson Staff Writer
First-year Felicia Pasadyn (pictured in the middle) celebrates in the moments following one of her finishes in what would become a record-setting Ivy Championships. By Courtesy of Harvard Athletic Communications

“When you see someone that far ahead on the races at the Ivy Championships — and just keep going...that's when you know you've got someone special to work with,” said head coach Stephanie Morawski ‘92, The Costin Family Head Coach for Harvard Women's Swimming & Diving, regarding first-year Felicia Pasadyn.

It is not normal to be winning multiple races at the Ivy League Swimming and Diving Championships by several seconds, where races are often determined by fractions of a second. Nor is it normal to win every event you swim in at a championship meet — but that’s exactly what Pasadyn did this February at the Katherine Moran Coleman Aquatics Center at Brown University in Providence, R.I.

Pasadyn swam a 1:55.88 to win the 200-yard IM, beating Princeton’s Christie Chong by over two seconds, setting a new program and pool record in the process, while posting an NCAA B-cut qualifying time.

Later, on the third day of the meet, she beat the longest-held program record, which was set in 2012 by Courtney Otto ‘16, by two seconds as she won the 400 IM. She won the event with another pool record, touching the wall in 4:08.47, almost an incredible six seconds ahead of second place.

“There wasn't a second at all, as you're watching her race, where she’s thinking, ‘Oh, I can just back off and touch the wall,’” said Morawski. “She just kept trying to increase her leads — and that was something pretty special to watch.”

Pasadyn continued to dominate on night four of competition as she won the 200-yard backstroke with yet another program record and meet record in 1:52.56, finishing over two seconds ahead of teammate Samantha Shelton ‘22.

In addition to earning Ivy League champion honors in three individual events, she swam in three relays, all of which placed first: the 200-yard medley, 800-yard freestyle, and 400-yard freestyle. The 200-yard medley set a new program record in 1:37.81, beating Princeton by five-hundredths of a second. The 800-yard freestyle finished in 6:59.92, the fourth-fastest time in the nation, an NCAA A-cut qualifying time, which also obliterated the previous program record by more than five seconds, setting a new meet record. Finally, in the last race of the meet, the 400-yard freestyle squad set yet another Harvard, meet, and pool record in 3:14.48, another NCAA A-cut qualifying time.

“One of the things that Felicia has that separates her from many people in the country is her ability to be tired and never, ever give up,” said Morawski. "She just keeps pushing through, and when you [see] it day in and day out in the pool and practice, you know it's going to translate at the end of the season.”

All in all, Pasadyn earned six All-Ivy First-Team honors and All-American status in her first year of collegiate competition, demonstrating time and time again that she’s able to compete at the highest level, even having missed a week of practice due to sickness in the lead-up to the meet.

Reflecting upon her transition from high school to college swimming, Pasadyn explained that being around teammates who share the same passion for swimming and “want to work incredibly hard to achieve their goals” impacted her swimming much more than she thought it would.

Among those mentors who have been a big part of Felicia’s transition to college swimming is none other than her older sister, Cassandra Pasadyn ‘21, who was recently named co-captain for the upcoming 2020-2021 season. Felicia explained how nice it is to have a family member there with her every step of the way, whether it be the ability to walk over to her dorm and eat dinner together if she was stressed, or just having someone there to show her the ropes and what it means to be a part of the team.

“It’s like a little piece of home,” Morawski said in regards to having a sibling on the team, while adding, “It’s a lot of fun.” The Padasyn parents came to several meets and were able to be there in the stands at the Ivy League Championship meet.

However, Cassandra is not the only other Pasadyn sibling to compete at Harvard. Selena Pasadyn ‘16 ran cross country and track for the Crimson, and Felicia herself also went through part of the college recruiting process for running before choosing to swim, a choice she’s very happy with. Luckily, throughout the quarantine, Felicia has been able to lean on running as a large part of her adjusted training regimen, given the lack of pool access. “I do feel that giving my mind and body a break from swimming will make me only love it more when I go back, and not take it for granted,” she said.

Morawski recounted that, on the day the team found out that NCAA nationals would be canceled, Felicia nonetheless got in the pool and swam a workout by herself, which is a testament to her drive and focus. “In her mind, she might not have NCAA, but at that time it was still ‘I have Olympic Trials’ or ‘I have three more years left,” said Morawski. “She has this ability to reset and refocus very quickly...and it’s that ability that’s her mental toughness right there.”

Among the uncertainty of what the fall and next season may bring, having acknowledged that there is no idea of what next semester may look like at the moment, Morawski also expressed, “We are hopeful that we have a championship meet in February of 2021. The process to get there will look very, very different. But as long as we have a meet that we want to win, they need to figure out a way to train,” which doesn’t always have to be training. Focusing on any little thing to help improve, whether it be flexibility or a positive mindset, will help improve for 2021, and the team has been quite successful at staying connected during the quarantine.

Despite not knowing when there will be access to a pool or a normal training regiment, Pasadyn said, “I just do know that I’m so thankful to have HWSD...throughout quarantine, along with my family members of course… I think the future’s looking positive even if we don’t know what the future holds.”