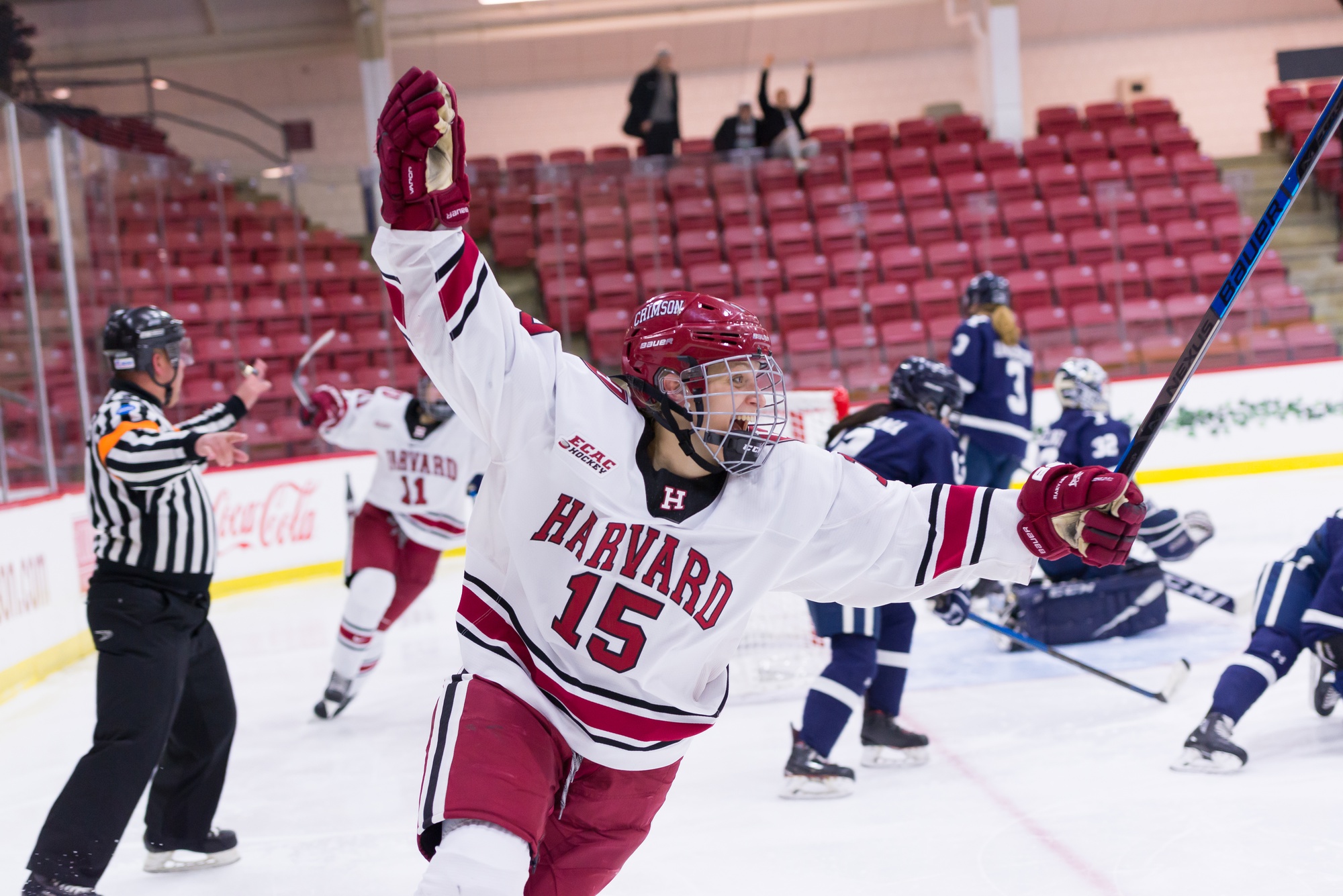 ‘This Is Why We Get Skated So Much’: Women’s Ice Hockey Outlasts Yale, Team Performance of the Year

By William C. Boggs, Crimson Staff Writer
Junior forward Becca Gilmore throws her hands up in celebration after clinching the marathon, season-deciding contest with Yale in 3OT. By Courtesy of Ben Vreeland

Over 102 minutes of game-play had elapsed, and even still, a winner had not yet been crowned. Everything was on the line as the mid-afternoon crept into the evening. The Harvard Crimson and the Yale Bulldogs had split the first two games of the ECAC quarterfinal series, meaning that this triple-overtime finish in game three would decide it all. The loser’s season would end, and the winner would advance to the ECAC championship weekend.

“We were sticking together, and we knew it was going to come down to who is mentally stronger and mentally tougher,” sophomore goaltender Lindsay Reed said.

By the time that things were all said and done, the teams had skated to the longest ECAC playoff game since 2010. After more than two periods of scoreless action, the game-winning goal finally emerged. Junior forward Becca Gilmore propelled the Crimson into the next round and into simultaneous feelings of pure joy, exhaustion, relief, disbelief, and celebration.

“You’re exhausted,” Gilmore said. “You’re not in disbelief that it went in, but it was like ‘Finally, it took three overtimes.’ [It’s] completely blissful and joyful...being able to just huddle around all the teammates and all the fans that stuck through six periods.”

The path to the ECAC semifinals, however, was not easy, which goes without saying when a team has to play over 100 minutes to advance. A 60-minute game already requires a great deal of stamina from all the players, so one can imagine the challenges that 100 minutes present. That said, the Harvard squad felt prepared for the unforeseen circumstances thanks to a rigorous training program.

“Our coaches definitely prepared us a ton for a three-overtime game, and I’m not even kidding,” Gilmore said. “We brought our favorite drills into the locker room [between periods]. This is why we get skated so much. This is why we are exhausted at the end of all of our practices — it was to prepare for this moment. When you’re in the practices, you love the sport, but you’re definitely exhausted, and you don’t understand why we’re doing such a high-intensity drill. It’s games like [Yale] that show [why].”

The challenges of the marathon game extended beyond the physical. The game had been back and forth from the beginning, with no team ever holding a two-goal lead. Harvard had scored first, but the Bulldogs evened at 1-1. When the Crimson scored its second, Yale countered with an equalizer before Harvard could find its third goal. And the alternating in the scoring had not ended yet.

In the final seconds of the game, the Crimson had put itself in prime position to advance to the semifinals, pulling ahead to a 3-2 lead with just 1:16 remaining in regulation. Overtime had seemed likely with 90 seconds to go but all of the sudden did not after Harvard’s late-game tally. Just about a minute later, however, overtime became imminent again. With an extra attacker on the ice, Yale maintained high pressure. As a point blast careened towards the net, traffic circled in front of Reed. Yale sophomore forward Claire Dalton made that traffic count, deflecting the puck in with just 14 seconds left in the third period. With the score locked at 3-3 and the momentum back in Bulldog control, Harvard had to regroup in the pre-overtime intermission.

“It takes character. We all came in definitely with our heads down a little bit, but right away...it was ‘Hey, we’re still in this. We’ve dominated for most of the play. There are lucky bounces,’” Gilmore said. “We were prepared. That was our [sixth] overtime experience, most when we were ahead and had to fight through. The hockey game is definitely a game of mistakes, and you just have to bear with it and stay positive. Our team did a really good job of not dwelling on it, not pointing fingers...and coming out with the win together.”

With regulation complete and both teams having the time in the locker room to reorganize, the first overtime period began. Both teams pushed several promising chances to the opposing net and scrapped to protect their own goals. After all, each team’s season could end with one stray bounce of the puck, and the pace of play showed this urgency. Nonetheless, the clock ticked away, and still, no one had managed to score. While playoff and tournament overtimes are unlimited until someone scores, regular-season games end in a tie after one five-minute extra session. For most anyone involved, even those who had played longer overtime and shootout games before, triple-digit minutes were still unprecedented. Eventually, the unusual circumstances of triple overtime dawned on the players.

“You have to laugh about it a little,” Reed said. “You’re kind of like ‘Wow, we’re going into the second overtime. Wow, we’re going into the third overtime. What is happening?’ Coach would come in between the periods and be like, ‘Alright, second overtime, I’ll give you two days off now. Third overtime, three days off.’ Using the comedy aspect helped ease the tension and pressure because it was next goal and your season is over.”

Amidst the exhaustion of four hours and 21 minutes of gameplay, the roller coaster of emotions in a back-and-forth game, and the realization that something truly strange and incredible was happening, it all suddenly came to an end with one shot. At nearly 6:30 p.m. Gilmore pounced on a loose puck in front of Yale junior goaltender Gianna Meloni, off of a feed from co-captain and forward Kat Hughes, and powered it into the back of the net. 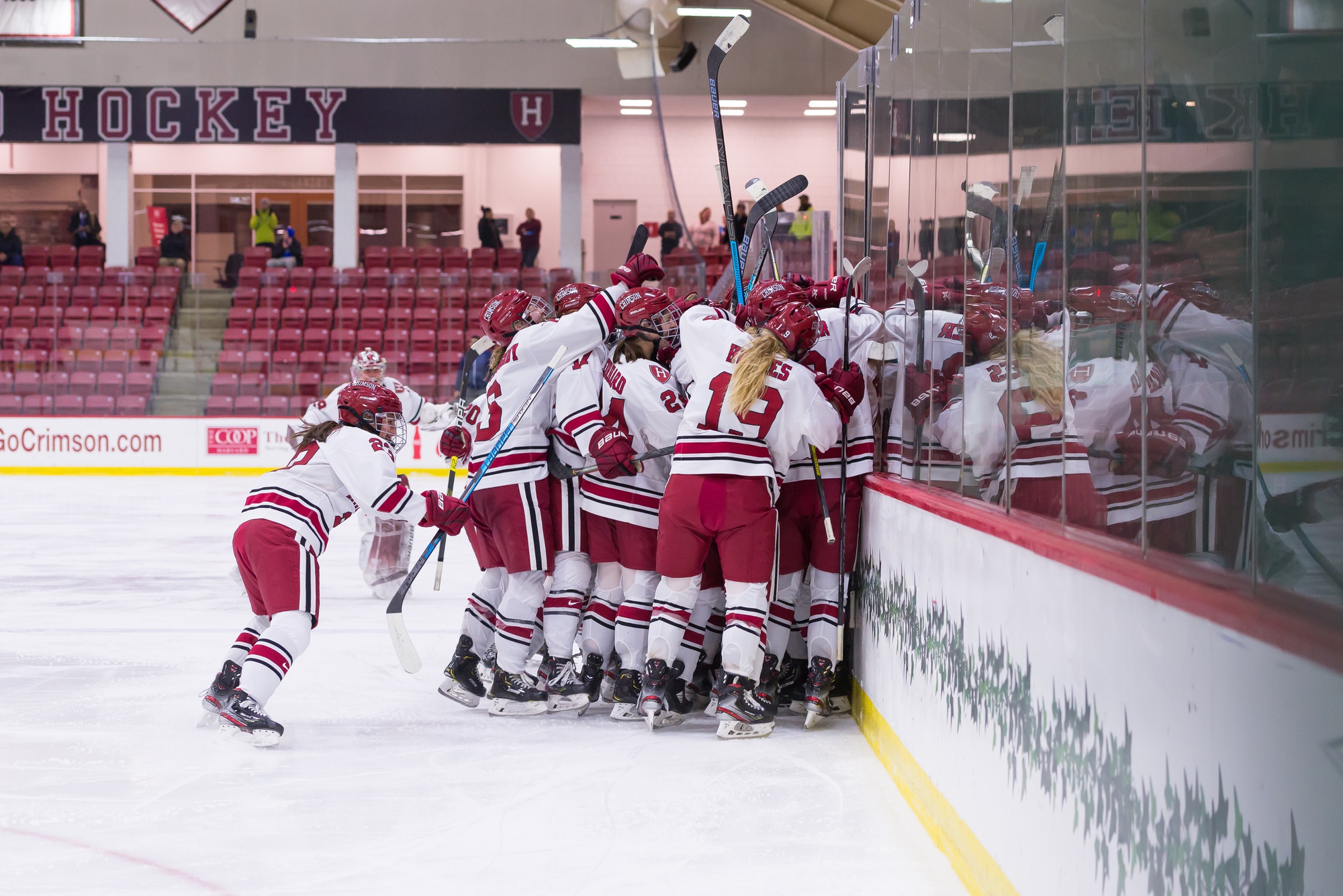 Harvard players sprint from the bench and all parts of the ice to congregate and celebrate Gilmore's OT game-winner, plus an ECAC semifinals berth. By Courtesy of Ben Vreeland

The Crimson’s season did end six days later on March 7 at the hands of top-seeded Cornell, and indeed all NCAA seasons ended on March 12 as a result of the COVID-19 pandemic. Since the end of the season, the team has begun its preparation for next year. Junior defender Emma Buckles and junior goaltender Becky Dutton have been selected as captains, and the 2024 recruiting class has been announced. And while uncertainty about the fall semester and upcoming sports seasons remains, the lasting effects and memories of this game will persist nonetheless.

“It really bonds us together,” Reed said. “It shows that, no matter what happens, our mentality as a team is ‘We’re tough.’ You can take us to three overtimes, but in our own locker room, we know that we can still overcome our situation.”