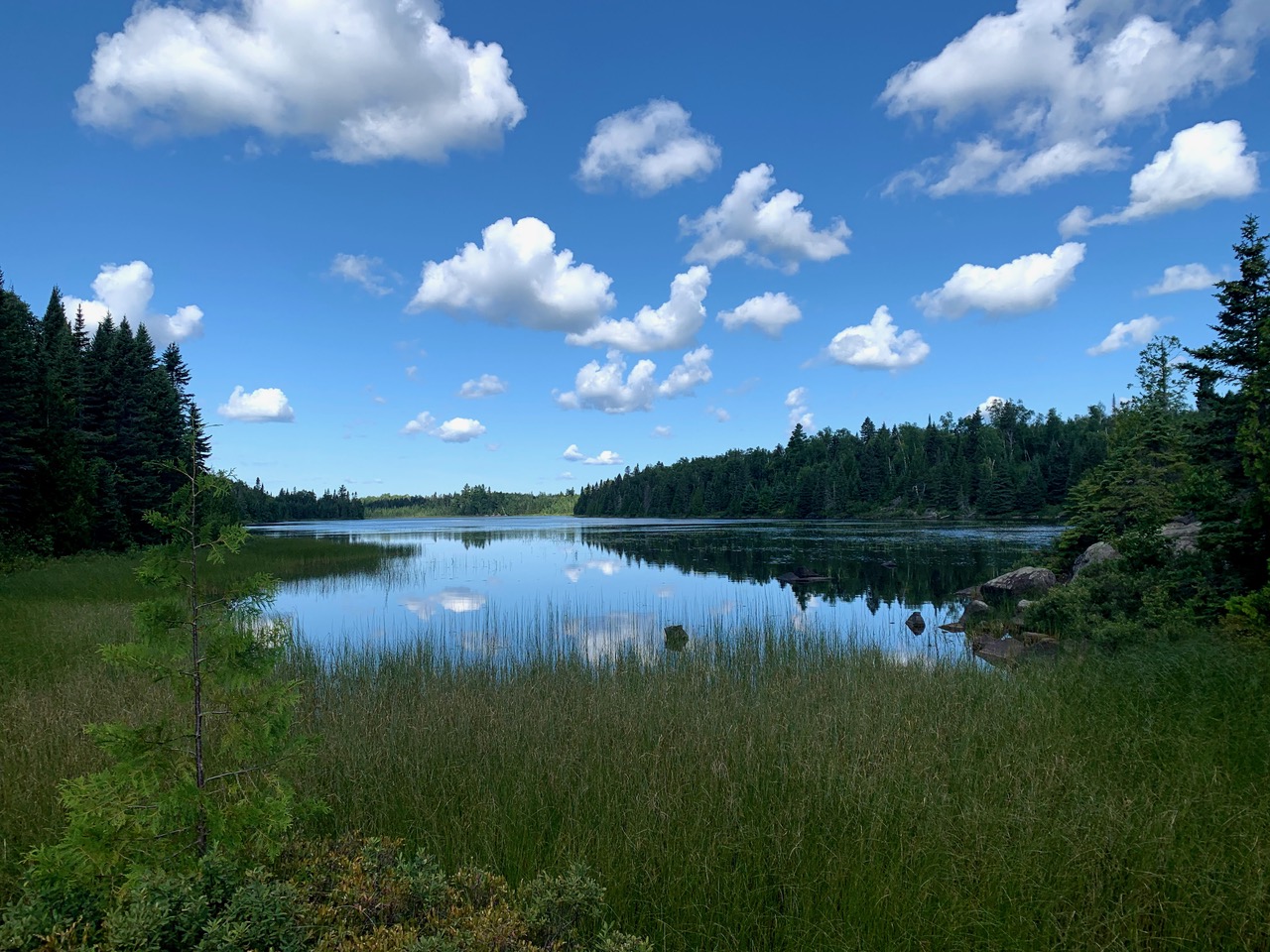 GRAND MARAIS, Minn. — A Cantabridgian sensibility counsels against striking up conversation with random people on the T, much less following them into the woods. Scruffy men with leather-sheathed daggers? Keep more than a social distance.

But on the Superior Hiking Trail — a 300-mile footpath from Canada to the farthest inland port of the Saint Lawrence Seaway — strangers like Ron are my best pals.

I’m headed into a fishing town to pick up food for the next leg of my two-week journey south. (I need bug spray, too; I ran out after two nights of apocalyptic mosquitoes.) The local-looking fellow at the trailhead advises Grand Marais is a couple of miles away by road. But he knows a shortcut and invites me toward the bushes. I oblige and abandon my map.

We trek down a ski path, apparently overrun with shoulder-high grass until Ron mowed it this morning. After a career in construction, he spends his free time tending to this hometown trail network. I feel exhausted after today’s 16-mile march, but the 72-year-old is unimpressed; he says he walked at least that far this morning in his baggy blue jeans.

Wild raspberries — ubiquitous since the start of my solo journey — line the hike. These scarlet delights are wider, thinner, and more tender than the ones you buy at Whole Foods, with a taste akin to prune-flavored Sweet Tarts. We pause for a snack.

“Not raspberries,” Ron chides, nibbling a piece of grass. “Thimbleberries.”

I add another entry to my mental list of edible species. Other passers-by have pointed out blueberries, gooseberries, and serviceberries. One forager recommended I pick reddish-orange lobster mushrooms and sautée them in butter, like the seafood namesake. Though fungus-wary, I’ll give it a try.

The trail turns into forest, and after a few minutes of bushwhacking, we’re standing on the gridiron behind Ron’s alma mater: Cook County High School. The Vikings were state football champions in 1997, 1998, and 1999, he brags, but they’ve never been the same since that illustrious coach left town.

At the road that runs toward the harbor, Ron gives directions to a favorite restaurant and assures that my filthy condition won’t faze its owners. He says goodbye and turns back uphill; I think he wandered pretty far out of his way to guide me.

It might sound lonely to backpack in solitude for eight hours a day, cell service mostly nonexistent. But trail life catalyzes a near-immediate sense of intimacy with fellow adventurers. Personal connection comes naturally while filling water from a leech-infested pond or savoring a pot of rehydrated beef stroganoff.

Theodore Roosevelt, Class of 1880, writes of a “lonely freedom” enchanting those who wander into the wilderness. Mountains and waterfalls are magnificent, but for me, the outdoors is most appealing in its disinhibition. It’s less about escaping the bustle of civilization than savoring moments of uncommon social authenticity.

They’re rarely the subject of my storytelling, but spontaneous encounters with people like Lucy, Celeste, Elli, Leah, Crystal, Harriet, Ron, Gracie, Dan, Ben, Athena, Molly, and Kathryn — along with dozens of others whom I remember vividly but can’t name — bring the SHT to life. They are campfire companions, wildlife interpreters, hitchhike enablers, and ambassadors of North Shore hospitality.

When in the backcountry, trust strangers.