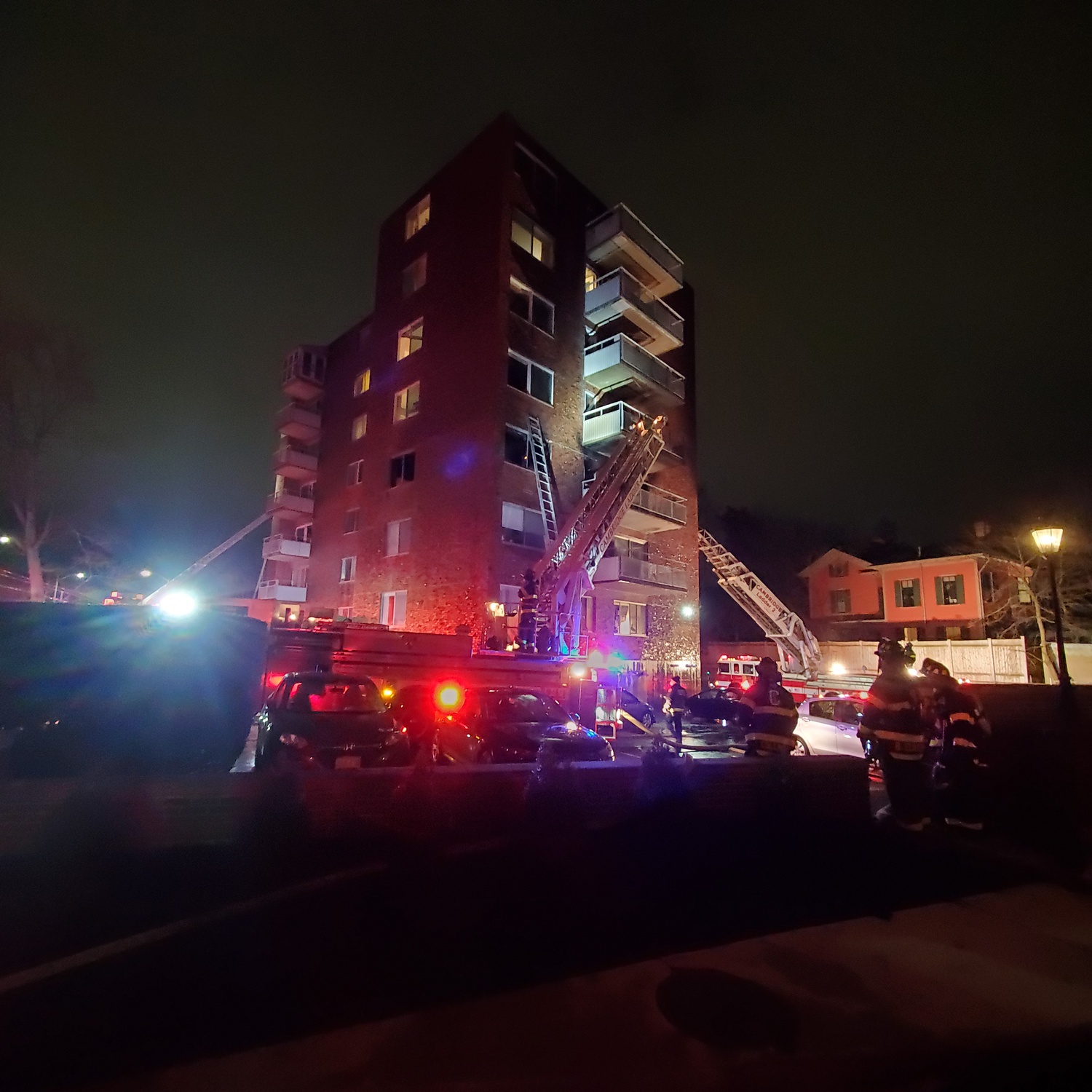 Roughly 100 Cambridge residents fled their homes last week, forced out by a fire originating on the third floor of a condominium in Harvard Square that spread throughout the building.

Cambridge Fire Department was notified of the fire the night of Jan. 12, the, which occurred at 14 Concord Ave., at 11:48 p.m., according to Cambridge Fire Chief Gerard E. Mahoney. Firefighters worked for approximately one hour to put out the flames and ensure no one was left inside.

Mahoney said the fire originated in an apartment on the third floor of the building and its cause was likely a defective refrigerator compressor.

He also said there were no fatalities. Two occupants were transported to the hospital and two cats died in the fire.

The building contains 44 units, 35 of which were occupied by permanent residents, Cambridge spokesperson Lee Gianetti wrote in an email.

First-responders were able to rescue everyone in the building through its interior stairway, Mahoney said. He added that the firefighters did “a phenomenal job.”

One resident, Michika Onoda, said he awoke the night of the fire to an alarm but did not immediately smell smoke. Police officers knocked on his door, prompting Onada, his wife, and their six-month-old baby to leave the apartment and evacuate outside.

At around 3 a.m., Onoda said he was able to briefly return to his apartment, escorted by a firefighter, to rescue his cat and retrieve his cellphone, wallet, and food for his baby.

Mahoney said that the fire “never would have gotten to the extent that it did” if the building had a sprinkler system installed. Due to what he called “a very unfortunate exemption” in Chapter 148 of Mass. General Laws — which contains the state’s fire prevention codes — the state did not require the condominium to install a sprinkler system.

Mahoney said he hopes the Commonwealth will use last week’s fire as an impetus to revise the law.

“Certainly we’ll continue to work with stakeholders to try and improve the availability of sprinklers to protect the public,” he said. “We would encourage people to install sprinklers at the time of construction whether or not there’s a regulation in place.”

To house 25 displaced residents who “didn’t have other means and places to stay,” the Red Cross, with the assistance of the City of Cambridge, helped subsidize the cost of several nights’ stay at the Sheraton Commander Hotel, said Jeff Hall, a spokesperson for the organization’s Massachusetts chapter.

“We worked with the owner of the affected building to help pay for those hotel rooms, and we provided food and other basic needs,” Hall said. “We’ll follow along with the people probably for the next two to three weeks to make sure that they have a plan to get resettled somewhere.”

Gianetti wrote that the city is providing financial support to residents affected by the fire through the Mayor’s Disaster Relief Fund.

Onoda said he and his family stayed at the Sheraton until Sunday when they relocated to an Airbnb. He said he hopes he will be able to return to his apartment within a few weeks.

“The apartment manager said they will clean the entire building in this week,” he said. “The City of Cambridge will check the situation of the apartment, and if it’s okay, I will be permitted to [go] back to the apartment.”

Onoda said that though the fire did not spread to his top-floor apartment, his belongings smell like smoke and will need to be either thoroughly cleaned or completely replaced. He added that he does not have fire insurance.

Before residents can safely return to the building, Mahoney said the City must inspect the property to ensure it is safe and make sure all repairs were done according to code.