“They didn’t really know I could snap until I raised my hand one day at practice, or before practice, and was like ‘Hey do you guys want me to go snap or anything?’ and they’re like, ‘Uh, sure, we didn’t know you could.’” 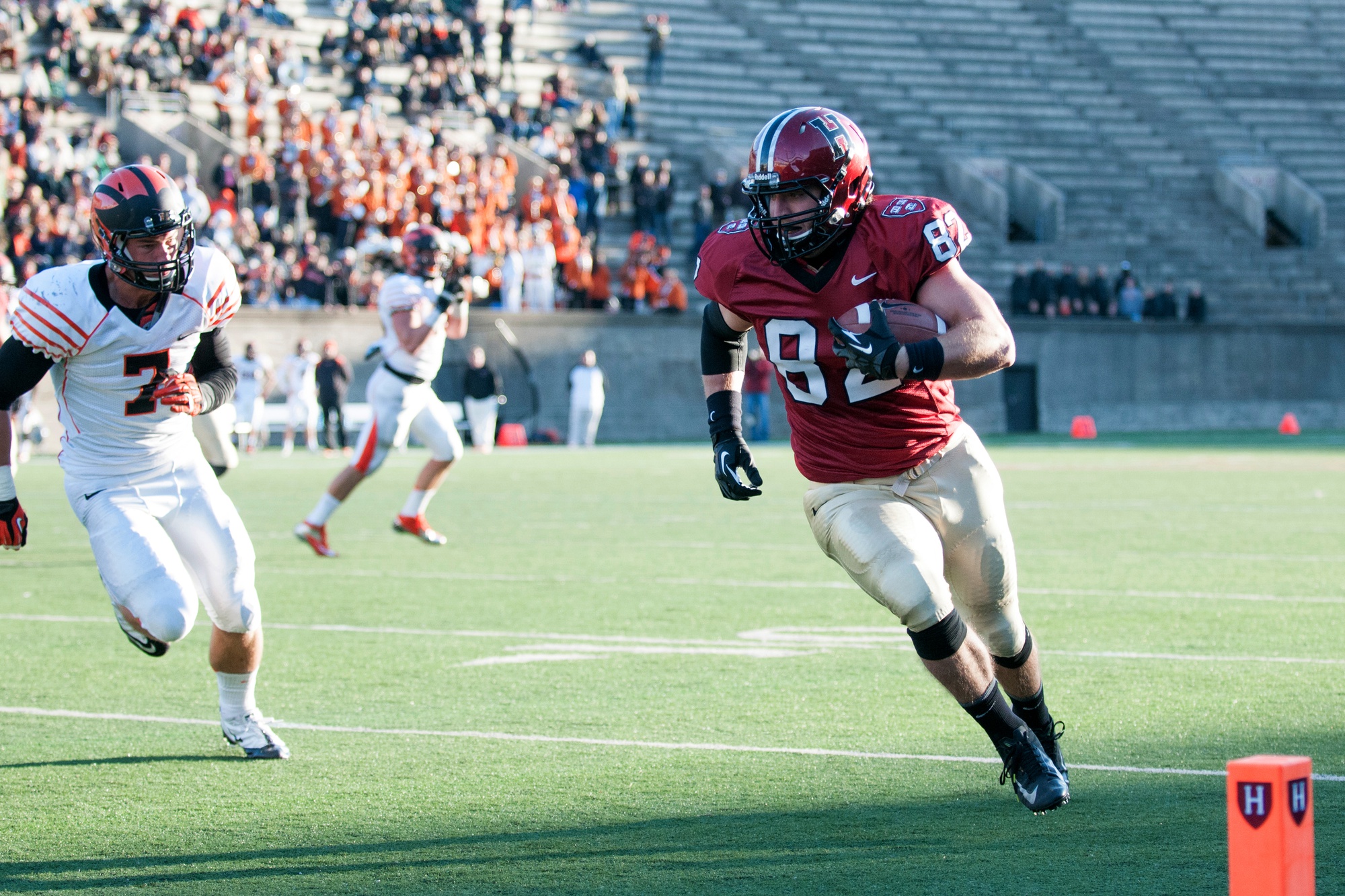 Tight end and long snapper Tyler Ott ’14 heads for the end zone on Harvard’s home turf against Princeton. Despite eventually falling to the Tigers 51-48 in this triple-overtime thriller on October 26, 2013—the Crimson’s only loss of Ott’s senior season—Ott finished the game with three touchdowns, tying the program record for single-game touchdown receptions. By Mark Kelsey
By Zing Gee, Crimson Staff Writer

There are not many long snappers in the National Football League. Each team usually allocates just one roster spot for a long snapper (only seven of the 32 teams currently have two long snappers under contract). The limited number of spots makes the position a not-so-easy job to land, but to Tyler Ott ‘14, former Harvard football tight end and current pro long snapper, it is one of the best jobs in the NFL.

“It’s a pretty great job in the NFL. You know, you might have some pressure situations, but as far as contact and staying healthy—knock on wood and everything—it’s one of the best positions I think that you could be playing,” Ott said.

In an NFL season that came with many firsts—teams played in empty stadiums, teams were restricted to entirely virtual practice some weeks, and the Super Bowl will be hosted by one of the teams playing for the title—some of the most exciting firsts revolve around Harvard football.

This NFL season marks the first time that two Harvard football alumni have been selected to the Pro Bowl (the NFL’s all-star contest) in the same year. Harvard tight end and pro fullback Kyle Juszczyk ‘13 of the San Francisco 49ers and Ott of the Seattle Seahawks—former teammates—earned selections to “play” virtually in the Pro Bowl this Sunday, January 31. The festivities include a week’s worth of digital events, concluding in a “Madden NFL 21” game featuring video-game versions of the players selected to the all-star event, like Ott and Juszczyk. The game’s normal in-person version, however, is canceled this year, unlike the regular season or Super Bowl. This is Juszyzyk’s fifth selection to the Pro Bowl, and Ott’s first.

Pro Bowl selections are voted on by fans, players, and coaches, with each groups’ ballots counting for a third of the vote. Nonetheless, this is only the second year in which long snappers have been included on the ballot. Before the 2019-2020 season, the coaching staffs of the two Pro Bowl teams hand-picked the long snappers themselves.

“Obviously very proud and excited and humbled to be selected… It’s humbling to know my peers see the work I’ve been doing and the season I’ve been having,” said Ott, who joins the list as just the fourth Crimson alum to be selected to a Pro Bowl.

Ott’s path to the Pro Bowl, before running through Harvard, began when he first picked up long snapping in middle school—and may have never occurred if a soccer player had not taken his spot.

“I was a kicker for a hot second, back, like fifth, sixth grade,” Ott recalled. “Seventh grade...we had a soccer player decide to join the team and take over kicking, so to stay a part of that, I messed around with snapping a little bit.”

Ott credits his former coach Carl Johnson for helping him hone the skill, beginning in his freshman year on junior varsity at Jenks High School in Oklahoma. Johnson, who used to coach long snappers and special teams at the college level, asked Ott to snap one day during practice and coached Ott along the way as he stuck with it. “He pretty much gave me the foundation of my snapping,” says Ott. Since then, “It’s all been kind of self-taught and self-adjust as needed, working on different stuff.”

When he arrived at Harvard as a first-year after being recruited as a tight end, the Crimson coaching staff had no idea Ott would end up doubling as a long snapper.

“They didn’t really know I could snap until I raised my hand one day at practice, or before practice, and was like ‘Hey do you guys want me to go snap or anything?’ and they’re like, ‘Uh, sure, we didn’t know you could,’” said Ott. 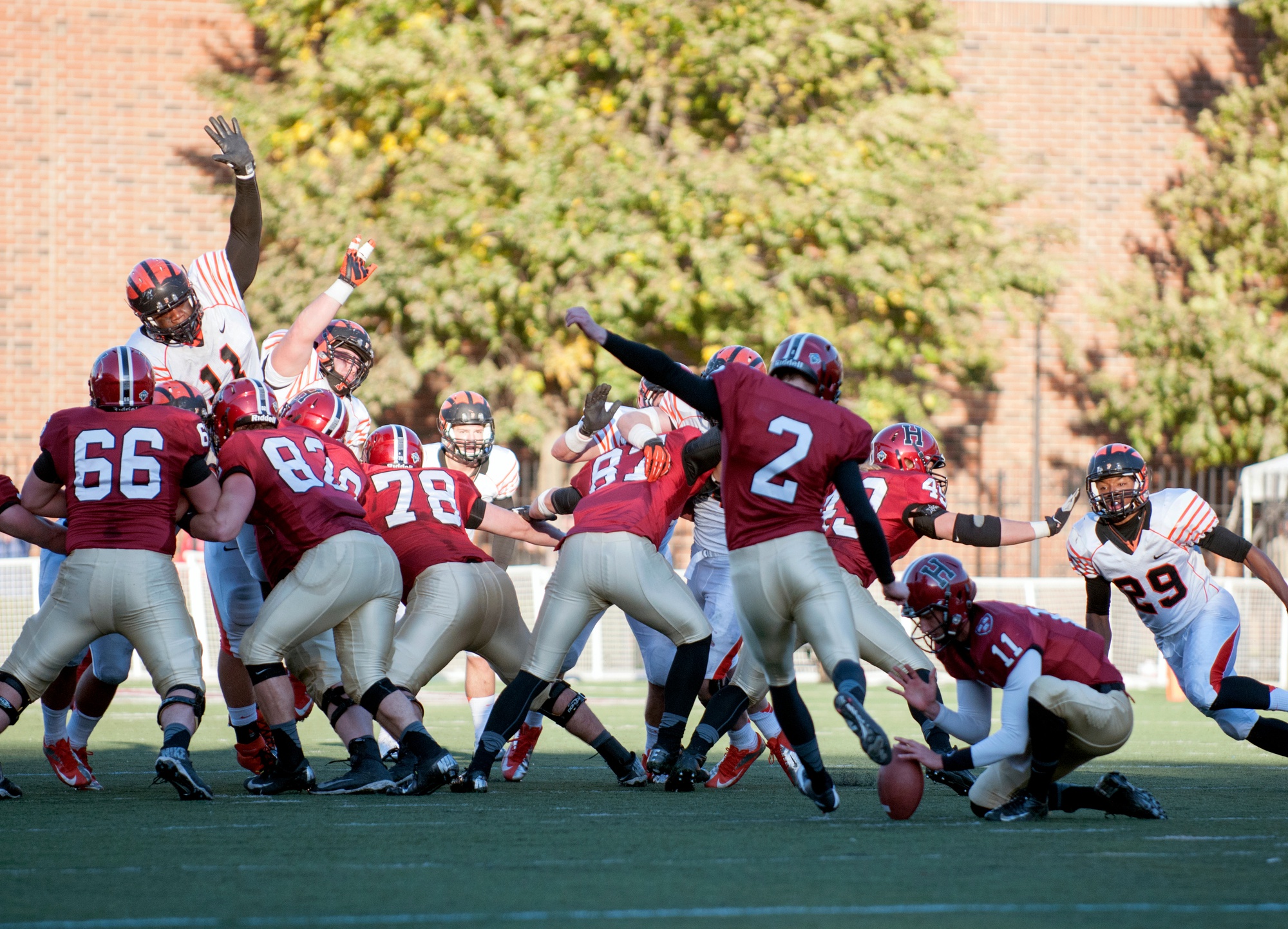 Tyler Ott ’14, wearing number 82, blocks the Princeton defensive line with the rest of the Crimson kicking unit after delivering the snap to kicker Andrew Flesher ’15 in a 2013 contest at Harvard Stadium. By Mark Kelsey

Needless to say, he took over primary long snapping duties beginning in 2011, his sophomore season, while continuing to play tight end. In 2014, Ott finished the year with 15 receptions for 188 yards and four touchdowns, including three against Princeton in a triple-overtime heartbreaker. While considering trying to play tight end professionally, Ott ultimately decided to give long snapping a shot at the NFL level after graduating with a degree in economics and a secondary in environmental science and public policy.

“I thought there was a slim chance I could maybe play tight end, but you know snapping was really my ticket,” he said.

Ott began his NFL career with brief stints with the New England Patriots, New York Giants, St. Louis Rams (now the Los Angeles Rams), and Cincinnati Bengals throughout his first two NFL seasons. A January 1, 2017, phone call, however, would change his career. Due to an injury to the Seattle long snapper right before the squad's wild card playoff game, the team needed a replacement in a hurry. The Seahawks would turn to Ott, signing him in time for their win over the Detroit Lions on January 7. Ott has remained with the team ever since, signing a three-year contract extension in 2019, contracting him through the 2022-2023 season.

Despite Ott’s success this year, the season did not come without its challenges and difficult choices. On his decision to opt into this COVID-affected season, Ott, who is involved in the NFL Players Association, the union that represents the league’s players, said, “We felt safe with the protocols that the NFL was putting in place… So we felt pretty safe that, if there was going to be a season, that I should keep working… You know, every year lost in the NFL is big because you don't have a long career.”

Tyler and his wife Ashley Ott ‘11, former Crimson women’s ice hockey forward, have a five-month-old son, and Ott said one of the toughest parts of this year has been not being able to see family, especially for them to meet the baby. Despite these challenges, Ott said he is very fortunate to be in the position he is, being able to play football and being on a team that did exceptionally well with staying safe. The Seahawks finished their season without a single COVID-19 case on the roster and avoided practice and walk-through cancellations entirely.

Looking towards the virtual Pro Bowl this Sunday, former Crimson teammates Ott and Juszczyk—who now faceoff at least twice a season as divisional rivals—will be (in theory) suiting up to play together on the same team once again, although on the screen and not quite on the field.

Reflecting on his time at Harvard, Ott remarked, “I was in a [tight end] group with some really good players… We had a really stacked room… [The] tight end room was always a really good room for some reason at Harvard.”

All these years later, Juszczyk, Cameron Brate ‘14 (who will be appearing in Super Bowl LV next week), and Anthony Firkser ‘17 are all among those who played tight end with Ott for Harvard and are currently competing in the NFL. Centers Nick Easton ‘15, Cole Toner ‘16, and Adam Redmond ‘17 also all overlapped at least one year with Ott in college and are on active rosters or practice squads in the NFL. While never overlapping with Ott, quarterback Ryan Fitzpatrick ‘05 just completed his 16th season in the NFL as well. Ben Braunecker ‘16—another member of that tight end room—also recently spent four years with the Chicago Bears before retiring following his release last offseason.

Ott says that people often ask him how many Harvard football alumni are in the NFL. “We always remind guys that there's like eight or nine of us that are in the league right now on roster[s] or on practice squad[s] and everybody's like, ‘No way, you're kidding.’”

“We [Harvard alumni] get to jersey swap and do all that fun stuff...trying to get the Crimson collection of jerseys together… We show some proof on the field that we have some good football back in the Ivy League.”

—Staff writer Zing Gee can be reached at zing.gee@thecrimson.com.