Women’s Soccer Turns It On In Second Half, Routs Cornell to Set Up Brown Showdown 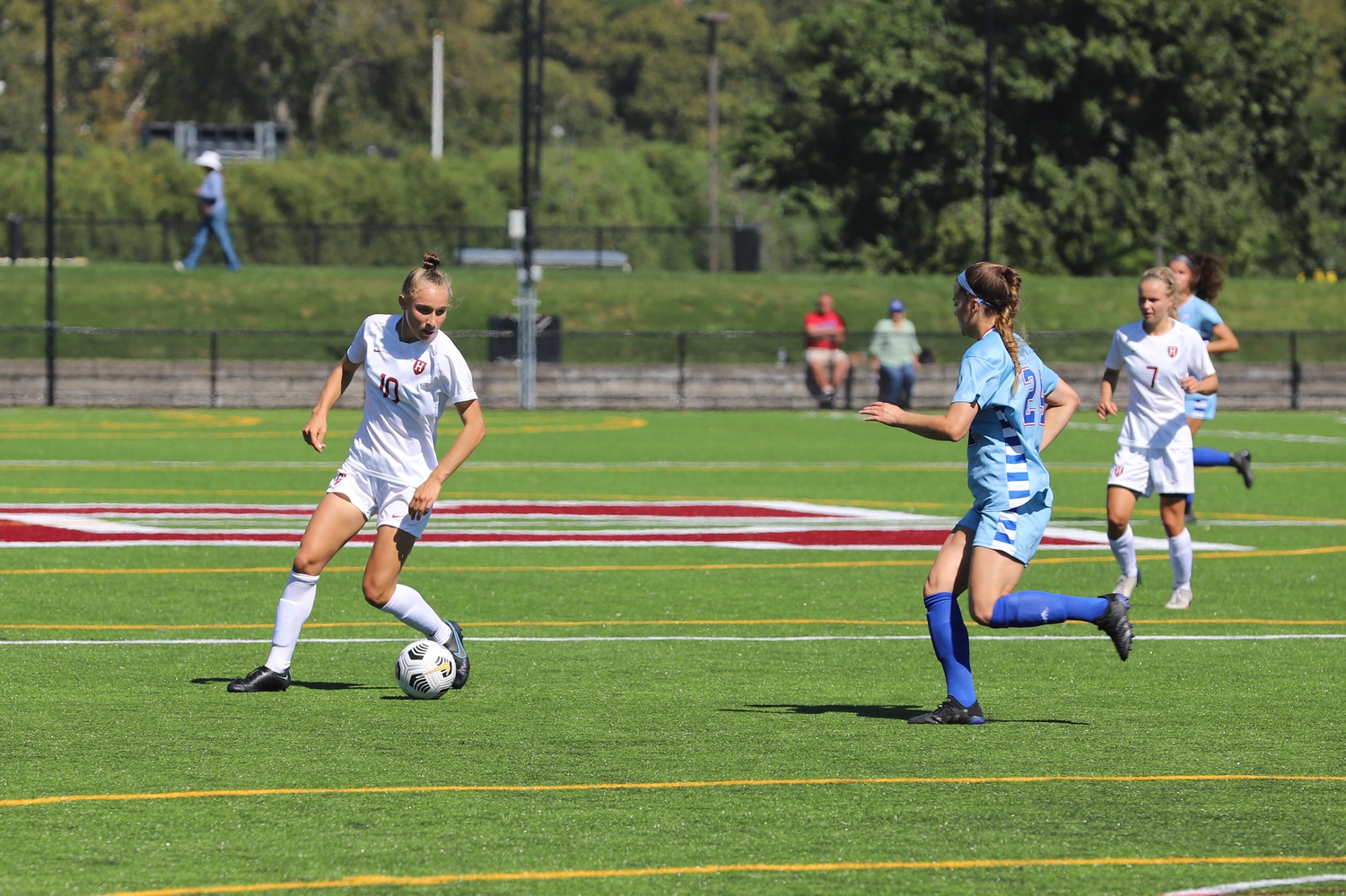 Harvard went into the halftime break in Ithaca tied 0-0 Saturday afternoon, having been neutralized by Cornell’s first-half press. But any hope of a massive Big Red upset was quickly stamped out in the second stanza, as two goals from junior center forward Angela Caloia keyed the Crimson’s 4-0 win after the sluggish first-half performance. No.10/18 Harvard (9-0-1, 3-0-0 Ivy League) kept its third consecutive clean sheet to start the Ancient Eight season, while Cornell (3-7-2, 1-2-0 Ivy) continued to show signs of improvement after it notched its first Ivy League win since 2016 against Columbia.

The first-half performance was unlike many the Crimson has had this season. The team was clearly out of sync, and the first half was evenly matched. Harvard went into the break with a 5-3 shots advantage and a comfortable possession edge, but it was the Big Red who came closest to breaking the deadlock, as Cornell midfielder Aidan Julia Reineman hit the post on a free kick 12 minutes in after junior central defender Lara Schenk was booked for a foul just outside the box. The Crimson manufactured a few chances of its own, but the final pass or touch tended to let it down. The two best first-half opportunities came in the first 15 minutes to sophomore midfielders Hannah Griffin and Gabby Delpico. Griffin had a strong shot saved a few minutes before an open Delpico could not get enough on a first-time effort from close range to direct it past Cornell’s goalie.

The Big Red played aggressive defense, pressing Harvard and forcing bad passes and decisions. Cornell clearly attempted to limit the Crimson’s time and space in midfield, pressing especially high on first-year midfielder Hannah Bebar, who was fouled a few times as a result. Harvard opted to try to play the ball in behind the Big Red defense in the first half, usually looking for the speedy Griffin. Head coach Chris Hamblin claimed that the team was surprised by Cornell’s press, which contributed to the sloppy first-half performance.

“We weren’t sure how Cornell was going to come out,” Hamblin said. “They pressed us pretty hard in the first half, and I think it took us a little bit to figure out. We know how to play against [a press] but we haven’t had to face that in a while, and so we struggled a little bit and got a little frustrated. At halftime we regrouped and hit the reset button and talked about what makes us successful and how we can go about finding those solutions, and we were able to execute.”

It became clear very quickly that the second half would be no repeat of the first. The Crimson scored one minute into the half, as Bebar’s perfect looping cross found the head of Caloia, and the ball then found the back of the net. Caloia’s first goal opened the floodgates as the Crimson ran rampant through Cornell’s tiring defense. Three more followed in quick succession, with 25 minutes separating the four goals. Harvard’s passing became much crisper, and the misplaced passes that marred the first half transformed into dangerous combination play and gilt-edge chances. The Crimson’s skilled attacking players shined, with Bebar also assisting on Caloia’s second goal, giving her six assists and the center forward a league-high eight goals on the season.

“Playing quick in combination was there in the second half, and we were able to open them up a little bit,” Hamblin said. “It’s difficult for teams to high press for an entire game. They got tired, and the game started to open up, and that suited us… [Bebar and Caloia] are very talented players and connected very well. We played well in the second half, and were able to take advantage of those chances.”

The Big Red threatened a few times in the second stanza, most notably when an ambitious long-range shot from Cornell midfielder Reagan Pauwels caromed off the bottom of the crossbar and out. But Harvard’s defense was generally sound, and Cornell ended the game with just six total shots and one on goal, making it three straight games with six or fewer shots conceded for the Crimson.

Four goals were enough for Hamblin to decide to rest his starters late in the game and rotate in some players who have not gotten much playing time this season. A byproduct of that was the end of Schenk’s noteworthy minutes streak. Schenk had played every minute for the Crimson since the final game of 2018, a 27-game and nearly 2,500-minute span.

The real threats to Harvard’s undefeated record lie in the two weekends ahead. The Crimson returns home to face Brown (8-3-0, 3-0-0 Ivy) next weekend and will hope to avenge its last defeat, which came two years ago at home against the Bears and was decisive in the Ancient Eight title race. Brown will be flying high after a 3-1 victory over No.17/RV Princeton (9-2-1, 2-1-0 Ivy) this weekend. The Tigers will then look to get back into the title race when Harvard hosts them the following weekend.