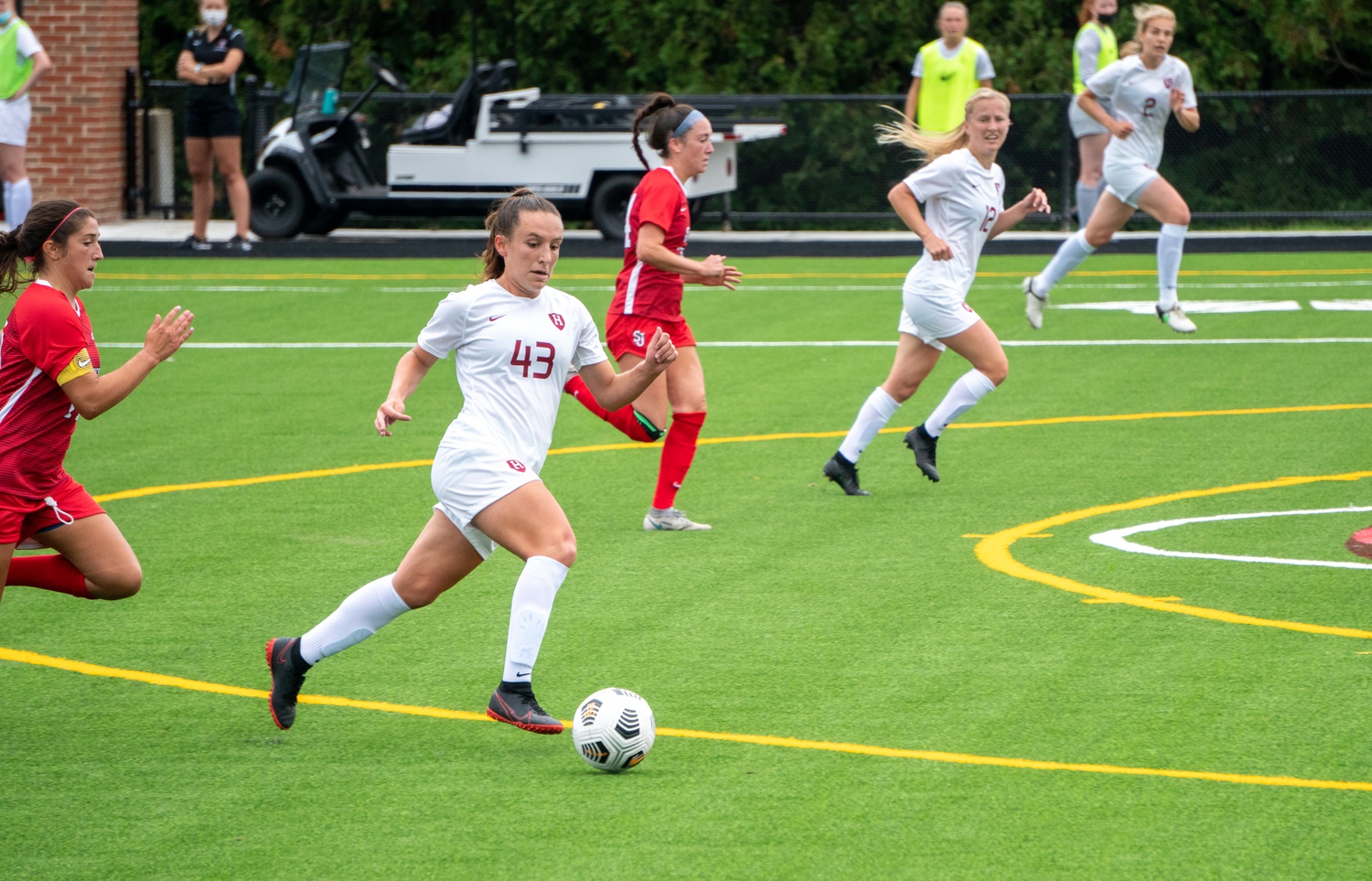 First-year forward Ainsley Ahmadian (#43) dribbles past defenders in a matchup with St. John's as senior forward Murphy Agnew (#12) provides support. Both players are key components in the Crimson's offense but missed the game versus Brown due to injury, dealing a blow to the dynamism of the Harvard attack. By Zadoc I. N. Gee
By Lev Cohen

Brown silenced Harvard’s potent attack on a windy Saturday afternoon at Jordan Field, dashing the Crimson’s hopes for an undefeated season and dealing it what could be a fatal blow in the race for the Ivy League title. The 1-0 defeat was deja vu for No.8/16 Harvard (9-1-1, 3-1-0), whose last loss came on the same weekend of the Ancient Eight season two years ago at home against reigning Ivy League champions No.22/NR Brown (9-3-0, 4-0-0).

The Bears broke the deadlock in the 75th minute of what was a tight and tense game throughout. Brown’s two star strikers came through again when the team needed them most. A clearance by Harvard first-year center back Jade Rose found the feet of dangerous junior forward Ava Seelenfreund, who on her first touch played a perfectly weighted pass ahead to junior forward Brittany Raphino. Senior left back Maria DiMartinis overran the ball, allowing Raphino to collect it and to fire a first-time shot past sophomore goalie Anna Karpenko and into the top left corner for her seventh goal of the season. One slip-up and miscommunication between the Crimson’s defense, which has been solid all season, was enough to propel the Bears past Harvard.

The Crimson desperately tried to advance the ball in the last 15 minutes, but the Bears always had the answers, forcing Harvard down the line and daring fullbacks to send in hopeful crosses from wide, unthreatening positions. All too often, the Crimson complied on a day in which it lacked ideas against a stout and assured Brown defense. Most of its crosses fluttered into the safe hands of senior goalie Kayla Thompson, who was in command throughout the afternoon.

“It hurts to lose a game, but I think we played well,” head coach Chris Hamblin said. “I don’t think we let ourselves down. I thought we moved the ball well. Brown defended very very well, made it difficult for us to break them down. I’m proud of the effort, proud of the way we approached the game, we just lacked a little bit in the final third.”

Harvard did manage to create a few chances, paramount among them an incisive cross early in the second half by junior right back Jordan Di Verniero that found Rose, who headed the ball just wide. But for the most part, the Crimson could not turn its significant possession advantage into gilt-edge chances. An attack that had scored nine goals in its first three league games and ranked in the top-12 in the nation in overall shots and shots on goal per game coming in could not generate much against Harvard’s toughest opponent of the season. The 11 shots and two shots on goal the Crimson mustered were both season lows.

For the first time since their injuries a month ago against Kansas, Harvard noticeably missed starting forwards Ainsley Ahmadian (first-year) and 2019 Ivy League player of the year Murphy Agnew (senior). Both are dynamic players who provide different elements to the attack, with Agnew’s speed and ability on the counter-attack and Ahmadian’s tendency to find pockets of space and create chances virtually unmatched by the rest of the Crimson squad.

“All teams have to deal with injuries at different times,” Hamblin said. “[Agnew and Ahmadian] are obviously very impactful players. It would have given us some different looks and maybe given us some different pieces of the puzzle, and that was something that we dealt with. I’m proud of the way the team performed, and I think people stepped up into those roles and did a good job.”

The Bears, for their part, did not add much attacking intent to what was largely a dour game. They took just six shots and had very little possession in the final third, instead choosing to sit back and test Harvard on the counter-attack. For the most part, the Crimson’s defense was sound, and Brown had nowhere near the attacking success it did two years ago, when it put four goals past the home side. But one chance was enough for Brown’s experienced and explosive front two to win the game. And because the Bears have already beaten the third championship contender, Princeton, they now have a huge leg up in the race for the Ivy League championship.

“I don’t think they had [many chances],” Hamblin said. “We didn’t give them much, but they took advantage of [their one chance]. And it’s heartbreaking for the group, they have been working so hard and played so well. But this game we love is brutal. It’s brutal. And we’ve got to grow from it. We’ve got to bounce back now, the only thing we can do is bounce back.”

Harvard returns to action on Tuesday against Central Connecticut State before a pivotal meeting next Saturday with No.24/RV Princeton (10-2-1, 3-1-0). The Crimson will have to refocus quickly as it seeks to stay in touch with the Bears atop the Ivy League standings and, failing a Brown slip-up against a lower-rated Ancient Eight opponent, to keep itself in the mix for an at-large bid to the NCAA Tournament.