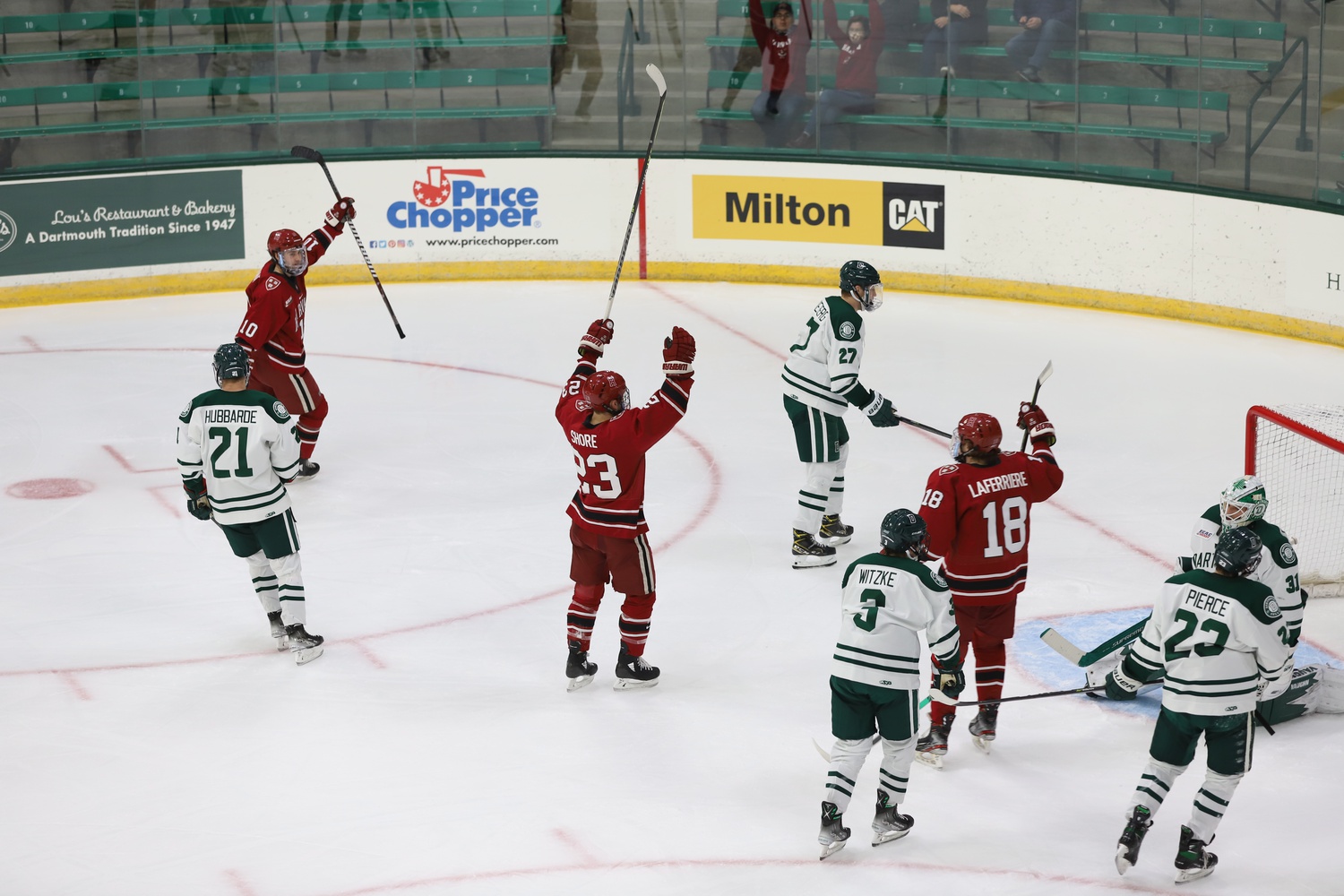 Harvard dropped its first game of the season on Monday night, 2-1 in overtime. By Owen A. Berger
By Jasper G. Goodman, Crimson Staff Writer

BOSTON — Coming off a pair of exhilarating conference victories on home ice over the weekend, the Harvard men’s hockey team failed to sustain its momentum across the Charles River at Northeastern on Monday night.

Harvard was caught flat-footed at the start of its first overtime period of the season Monday, allowing Northeastern to score the game-winning goal just seconds into the five-minute extra frame. Northeastern forward Gunnarwolf Fontaine broke a 1-1 tie 25 seconds into the 3-on-3 OT, putting the first blemish on Harvard’s record and delivering the Huskies a galvanizing two-point victory in front of the raucous 4,018 fans who filled Matthews Arena.

Fontaine collected the puck in his own zone before getting past a pair of crossed-up Harvard skaters to get out on a breakaway. The 5-foot-10 sophomore then rifled a shot from the slot past Harvard goalie Mitchell Gibson on the glove side.

“We just got crossed up a little bit,” said Harvard coach Ted Donato ’91. “I think [Northeastern defenseman Jordan Harris] kind of got behind one of our forwards and then we just got caught a little flat-footed, and he cut back to the middle and they were in. It was a nice play by them, but certainly not great defense.”

The NCAA implemented the five-minute, 3-on-3 overtime format last winter, moving college hockey to an OT style similar to the NHL’s. Monday marked the first time the Crimson had played in a 3-on-3 overtime period after the team missed last winter due to Covid-19.

“I started carrying it up and I saw that I had some time,” Fontaine said. “[Harris] just kind of stretched the zone and took both D with him. They kind of collided with each other, and I kind of got the breakaway from there.”

Harvard failed to capitalize on several opportunities in the latter stretch of the game, including a five-minute man-advantage during which the Crimson mustered just four shots on Northeastern goalie Devon Levi (20 saves).

“We had chances to get that second goal,” Donato said. “We just didn’t generate enough shots and second opportunities. ... Levi is a heck of a goalie, but I think we needed to put some pucks on him and get to some rebounds. We just didn’t do that often enough.”

The game started as a defensive battle, with the two teams combining for just nine shots in the first period.

“I thought both teams were kind of feeling each other out in the first period,” Donato said.

Harvard junior defenseman Henry Thrun started the scoring with a power-play goal just over four minutes into the second frame. Thrun buried a one-timer, redirecting a pass from Casey Dornbach through Levi’s five-hole to put Harvard up 1-0.

After giving up the power-play goal, Northeastern successfully killed off nine minutes of Harvard power play time, leaving the Crimson 1-for-4 on the man-advantage in the game.

“As a PK unit, we just took it one entry at a time,” said Levi of the Huskies’ penalty kill. “We were on the PK for a while, so it kind of sets you in a bad mindset if you look at the whole time you have to kill, rather than in increments. … The PK was unbelievable tonight, blocking shots for me. It was really cool to watch.”

Northeastern junior defenseman Jeremie Bucheler knotted the game at one with three minutes remaining in the second period. The Huskies got on an odd-man-rush, allowing Harris to feed a pass through traffic to Bucheler, who redirected the puck into the net from in the crease.

“We just have to be a little bit more sound defensively,” Donato said. “We got trapped in, gave up a 3-on-2 on their first goal. That’s just not intelligent hockey. So, we’re learning as a team.”

Laferriere, who had not scored this season prior to Saturday, turned a 1-1 game into a four-goal lead, capitalizing on his line’s strong passing game to deliver a Texas hat trick.

“I think, overall, the weekend was a good weekend for us as far as learning some lessons against some good teams that pushed us: on Friday night, Cornell, and then tonight, Northeastern — a dangerous offensive team, a good defensive team, very strong goaltending,” Donato said.

“We’re learning as a team,” he added. “Obviously, we’d like to win the [Northeastern] game in overtime, or win the game late on one of the power plays. But we’ll learn from it, lick our wounds, and get back on it this weekend.”