Harvard opens up its regular season action for the first time since March 2020 at Lavietes Pavilion, hosting Morehouse College in what the Crimson hopes is the first contest of many between the two storied institutions. 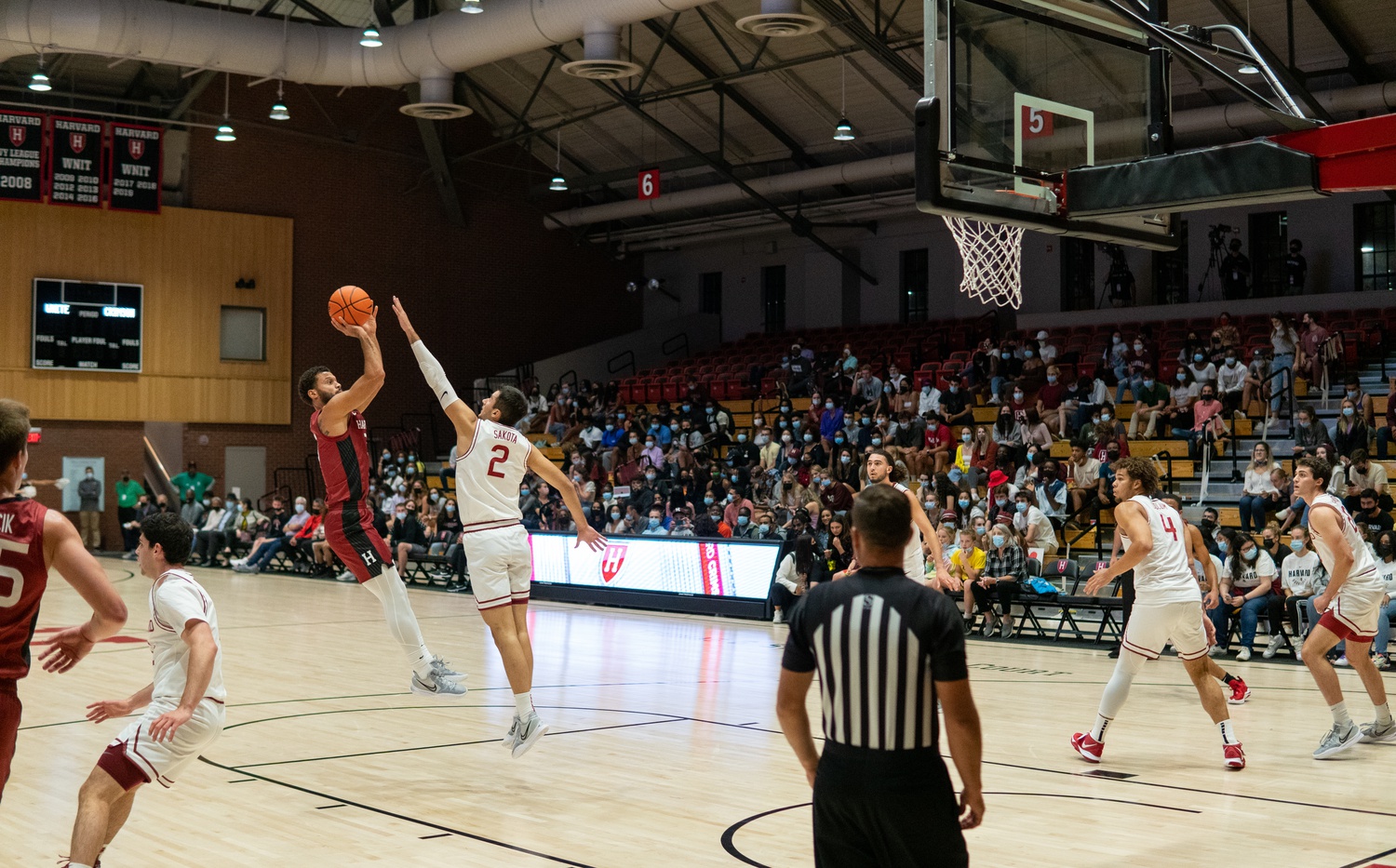 Last month, Crimson Madness (pictured above) provided Harvard its first opportunity to compete, albeit in a intra-squad scrimmage. That all changed on Tuesday when the Crimson faced off against the Maroon Tigers of Morehouse College for its first regular season game in 612 days. By Zadoc I. N. Gee
By David Manikas, Crimson Staff Writer

As the stands in Lavietes Pavilion were filling up, concessions were being sold prior to tip-off, and the sound of basketballs bouncing during warmups controlled the audio in the pavilion, a sense of normalcy was restored. Tuesday's regular season home opener marked the return of Harvard men’s basketball for the first time in 612 days. The Crimson, having been separated across states and countries due to the pandemic, comes in with great expectations as it does every year. This season might feel a little more important, however, as Harvard looks to avenge the 2019-20 squad whose postseason run and hopes of making the NCAA tournament were cut unexpectedly.

However, the contest signifies more than just Harvard’s return to the collegiate basketball scene. Facing off against Morehouse College for the first time in program history serves as a continuation of head coach Tommy Amaker’s initiative to schedule games with Historically Black Colleges and Universities in hopes of highlighting connections between Harvard and such renowned institutions. Over Amaker’s tenure, Harvard has faced off against Howard University five times, with a sixth meeting awaiting next month. Amaker intends on starting this tradition with Morehouse as well, discussing his intentions to head to Atlanta for a future contest.

“Morehouse has an incredible tradition and history and so many amazing people have gone to that institution,” Amaker said. “I’m very pleased that Harvard and Morehouse were able to bring about two communities and have an opportunity to continually build incredible bonds.”

Like most things returning during the Covid-19 era, however, Harvard basketball is not necessarily back as we remembered it (for the time being, at least). This year’s team is a stark contrast to the 2019-20 squad, which featured seven seniors leading the experienced squad into the Ivy League Tournament. With seven of the team’s 16 members having no college basketball experience until tonight, coach Amaker’s “next man up” philosophy will have to be embodied more than ever, as opportunities to step in and contribute will present themselves more often than before.

The first of these opportunities was available tonight, with the current injury status of Harvard’s frontcourt requiring a shift in the lineup. Previous years’ Harvard squads had integral frontcourt presences in Chris Lewis, Robert Baker, and Henry Welsh, among others. This year’s co-captain, 6’9” senior forward Mason Forbes is projected to miss considerable time along with the team’s younger, more inexperienced big men, including junior Ciaran Brayboy, sophomores Justice Ajogbor and Josh Hemmings, and freshman Bennett Pitcher.

Feeding off of the Lavietes crowd itching to see its team back in action, the Crimson started the game on a 10-2 run led by good ball movement and aggressive play. Resorting to a smaller lineup, although raising questions about rebounding and defensive ability, allowed Harvard to stretch the floor offensively. Senior co-captain Kale Catchings quickly forced Morehouse’s bigs out to the perimeter defensively after hitting a three pointer to start the game.

Without the frontcourt presence offered by Forbes and the team’s other bigs, the defensive and rebounding efforts had to be distributed across the lineup even more so than they normally would. However, the team responded emphatically on the defensive front, forcing 13 turnovers in the opening frame through timely steals and drawn charges. On the glass, Harvard closed an early rebounding gap to finish the half with the advantage over Morehouse. Junior forward Chris Ledlum muscled his way to 11 boards in the first half, cleaning up the glass on both the offensive and defensive end to add to his 11 first-half points on 55 percent shooting.

On the offensive end, the Crimson capitalized on Morehouse’s turnovers and found itself at the line often as the Maroon Tigers fell into foul trouble early — committing 16 fouls in the first half alone. Scoring in the first half was led by senior guard Noah Kirkwood and Ledlum, contributing 13 and 11 points, respectively.

With a comfortable first half lead developing in Lavietes, coach Amaker looked to his bench earlier than he typically would. As a result, freshmen Denham Wojcik and Louis Lesmond saw some early action, giving Amaker his first impression of the rookies against in-game competition.

Wojcik, the Charleston, S.C., native, ended the half with two points on a pair of free throws and a steal on the defensive end. Lesmond, the Paris, France, native named Blue Ribbon’s preseason Ivy League rookie of the year, looked comfortable shooting the ball and rocked Lavietes with a pair of highlight dunks. Coach Amaker acknowledged Lesmond’s potential to be a key contributor to the young squad going forward in the season.

“[Lesmond] brings a lot to the table with size, length, shooting ability, and athleticism,” Amaker said of the freshman. “We’ve certainly liked his potential and what he’s been able to do so far, as he’s worked really hard and earned the respect of his teammates.”

By way of the 25 foul calls between both sides in the first 20 minutes of action, it was difficult to establish a continuous flow to the game which the crowd could feed into. However, going into the break, a glimpse of the Lavietes magic that was missing since March 2020 was revealed. Kirkwood knocked down triples in back-to-back possessions before senior guard Spencer Freeman connected from downtown in the final five seconds of the half, ballooning the Harvard lead to 24 and erupting the crowd into an uproar.

The Crimson’s second half suffered in comparison to the first, as it struggled to score at the same efficient clip that it did to open the game. Although the lead grew to 30 in the early minutes of the second, Harvard shot 28 percent from the field and 16 percent from downtown in the first eight minutes of the half, ultimately ending the period 2-15 from deep and 10-30 overall.

Morehouse, on the other hand, found the rhythm it had been missing in the first, as the Maroon Tigers shot 60 percent from three and 57 percent from the field in the second half. Sophomore guard Tavares Oliver Jr. was consistently finding his shot throughout the game, shooting 50 percent from the field and ending with a team-high 19 points. Oliver was often the centerpiece behind Morehouse’s runs late in the game, including a 5-0 and 7-0 run following the 10-minute mark to cut the Crimson lead to 16 points.

Ultimately, however, Amaker’s squad was able to tame the late Maroon Tiger runs, closing out the game with an 86-70 victory and extending the home opener win streak to 10. Junior guard Idan Tretout, Ledlum, Kirkwood, and Lesmond all scored in double digits in the season opener.

As with any season, adjustments will have to be made, and Amaker’s squads have been known for their ability to fill roles and do whatever it takes to win. This season is proving to be no exception very early on, as perimeter players in Catchings, Kirkwood, and Ledlum found themselves inside the paint more often against Morehouse, battling for rebounds and forcing turnovers on the defensive end.

Catchings, standing at 6’6”, found himself going up against Morehouse’s defensive giants, yet managed to secure eight rebounds and find ways to score across the floor. Ledlum filled the physical, bruising role down low as well, being tenacious on both the offensive and defensive ends and reaping the rewards of putback dunks and layups to add towards his 20-point career-high total on the night. Kirkwood has been working on changing his style of play and tendency to operate on the wing with his role shifting to start the season.

“A great example of this is, for me, learning how to run to the rim instead of running to the wing, and that’s something that coach has been harping on,” Kirkwood said about the learning process. “I think we’re going to be prepared no matter what.”

Losing a season and a solid group of veterans in the previous years’ graduating classes naturally presents a challenge in the transition of leadership. With the current juniors and seniors missing out on a year of play, the natural progression of assuming responsibility on the team was disrupted — leaving the “veterans” to adjust as much as the rookies currently are.

“I’d say it’s definitely strange. I remember looking up to the older guys running the practices,” recalled Ledlum, whose last in-game action prior to tonight was as a freshman. “It’s definitely a different situation for us, but we’ve been trying our best to handle it and catch it in stride.”

Looking to build on its first win, Harvard travels to New Rochelle, N.Y., next to face off against Hall of Fame coach Rick Pitino’s Iona Gaels on Saturday, Nov. 13.