Women’s Soccer Falls to Wake Forest, 3-0, in First Round of NCAA Tournament 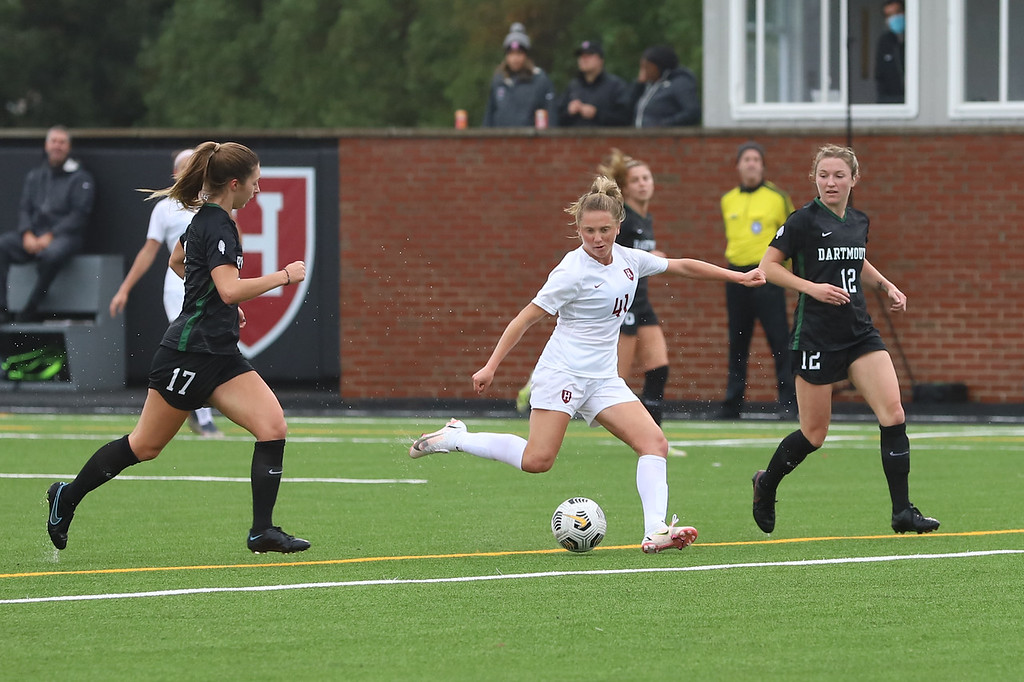 Harvard midfielder Hannah Bebar fires a shot during a game against Dartmouth earlier this year. Ultimately, Harvard compiled a 15-3-1 record on the season, which ended Sunday at the hands of Wake Forest. By Owen A. Berger
By Lev Cohen, Crimson Staff Writer

Harvard’s first trip to the NCAA Tournament since 2016 ended on Sunday afternoon in Winston-Salem, N.C., as Wake Forest neutralized the Crimson’s attack en route to a comfortable 3-0 win. The Demon Deacons (16-5-0, 7-5-0 ACC) played an almost mistake-free game, continuing their fine play after an excellent showing in the ACC Tournament as they held Harvard (12-3-1, 5-2-0 Ivy League) to just six shots, easily a season-low. The Crimson gave up three goals for only the second time in a game that was closer than the final score indicates.

Harvard entered the game with the better RPI, but it was clear from the start that the battle-tested ACC defense of Wake Forest would be difficult to break down. The Crimson had few glimpses at goal. Its only first-half shot came after first-year midfielder Hannah Bebar stole the ball and then had a shot saved by sophomore goalie Kaitlyn Parks, who registered her ninth shutout of the season. That turnover was one of only a few the Demon Deacons committed in their half all game. Harvard’s press was less effective than it had been during the regular season in a game in which the Crimson was out of possession far more than it is used to.

“We’ve had the majority of possession and more shots and chances than any team we’ve played this year, so this was a really big test for us,” head coach Chris Hamblin said. “And they’re a really good team. They [Wake Forest] have been playing a lot of good soccer toward the end of the season, and I think they’re going to be a tough out in the rest of this NCAA Tournament.”

Wake Forest also had its fair share of trouble breaking down the Crimson’s defense and managed just eight shots. But the Demon Deacons offered enough going forward to push a few goals past goalies Hannah Gardner (in the first half) and Anna Karpenko (in the second). Their first tally came on a left-footed strike by midfielder Sofia Rossi, who calmly received a pass from Shayla Smart and, from the top of the box, lofted a left-footed shot into the far corner for her ninth goal of the season to put Wake Forest ahead 12 minutes into the game.

Wake Forest then dealt a fatal blow to Harvard’s chances early in the second half, when it scored two goals in quick succession just as the Crimson was growing into the game. First, a tremendous through ball found forward Hulda Arnarsdottir, who buried a one-time finish to give the Demon Deacons an insurance goal. Two minutes later, a foul near the corner flag gave Wake Forest a dangerous free kick, which found the head of Smart and then the back of the net to put the game out of reach.

Harvard had its best patterns of play down the right flank, where first-year right back Taylor Fasnacht caused the Demon Deacons some problems. Fasnacht had the best chance to get on the scoresheet, finding space in the box and firing a shot that may have nestled inside the near post had Parks not gotten a strong hand to the ball to send it wide. But while the Crimson found more space on the counter attack early in the second half, the air was taken out of its sails by the one-two Wake Forest punch in the 58th and 61st minutes.

“That was really hard,” Hamblin said. “I think we had the momentum and had the possession and were getting at Wake a little bit right before they scored that second goal, so for them to take advantage of that and then the set-piece goal right after was a difficult pill to swallow. But what an experience for our players to be able to see how this tournament works out.”

Senior forward Murphy Agnew, the fulcrum of Harvard’s attack two years ago, returned to make her NCAA Tournament debut after missing the entire Ivy League season due to injury but was pulled after just 11 minutes and left with a noticeable limp. Without Agnew, the Crimson struggled to find an offensive spark, just as it had against Brown and Princeton. The midfield did not provide much support for junior forward Angela Caloia, who cut a lonely figure up top for most of the game as Harvard fought to establish possession in Wake Forest’s half.

It was a difficult end to a promising season for the Crimson, which will take solace in the fact that it fought through a number of injuries and will return most of its young core next season. The arrow is firmly pointed up for Harvard and for the Ivy League, which sent three teams to the NCAA Tournament for the first time since 2004. The conference’s hopes now rest with Princeton, which defeated Vermont in the first round and will play TCU on Friday.