Field Hockey to Face No. 7 Northwestern in NCAA Final Four 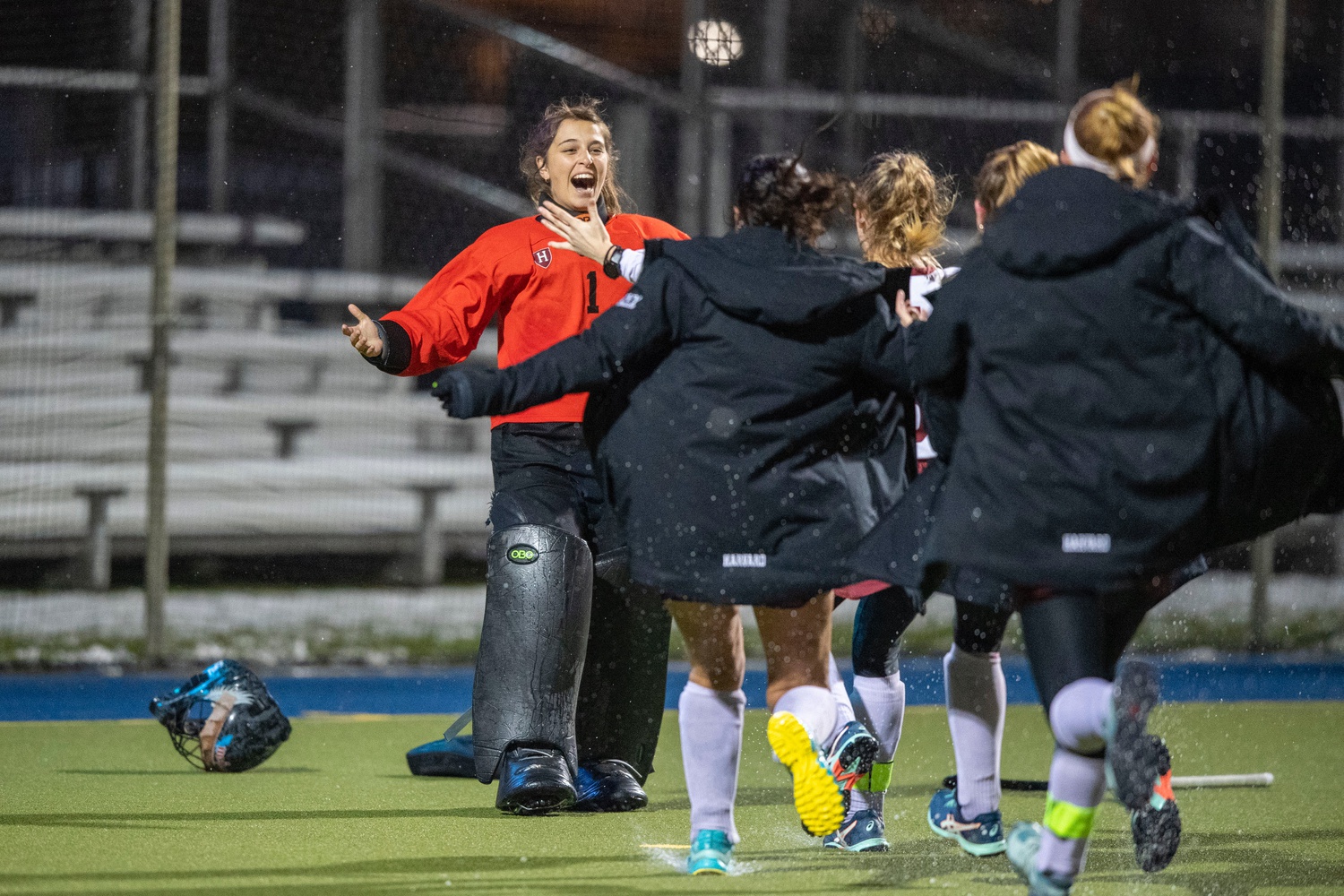 “This is a really special time for Harvard field hockey,” reflected field hockey head coach and Ivy League Coach of the Year Tjerk van Herwaarden. “So many people have put in so much time and sacrifice to be part of this team.”

And a special time it is for this remarkable team ─ on Friday, they will make history when they step onto Phyllis Ocker Field in Ann Arbor as the first Harvard field hockey team ever to play in a Final Four game. The Crimson (17-1, 7-0) will challenge yet another Big Ten school: the Northwestern Wildcats (16-5, 5-3 Big Ten).

“Our season has been very successful with everything that has happened, with the Ivy League championship, to the final four, beating those teams that we did,” van Herwaarden said. “We can only be very proud of what we were able to accomplish this past season. Anything we get from this moment on is going to be a massive bonus. We are going to prepare well, put ourselves in the right mindset, and do what we can to be competitive with Northwestern.”

No. 7 Northwestern took down the reigning NCAA tournament championUniversity of North Carolina in the first round of the competition last weekend (W, 2-0), a team that has taken home the title for the past three years (2018, 2019, 2020). Last year, No. 2 Michigan was the runner-up to UNC. To get to the Final Four, the Wildcats took down No. 4 Iowa (W, 1-0) in the quarterfinal round.

“Northwestern will be a whole different team with some different strengths that we want to take care of, so to that extent there will be some nuance changes in our preparation,” commented van Herwaarden.

The Wildcats hold some notable statistics themselves. One player, forward Bente Baekers, holds the number five slot in all of DI field hockey in points per game (2.26), and also grasps the seventh-best ranking in goals per game (0.89). The team is number two in the nation for scoring average (3.44), and number three for scoring margin (2.38), only three up from Harvard (1.82). When it comes to assists per game, the Wildcats have clinched the number three seat (2.81), and are the second-best in the nation for goals per game (3.57) and points per game (9.95).

Northwestern seems to pose a real offensive threat to the Crimson. But at the core of Harvard’s success this season and in its NCAA run so far has been its defense.

“Our defense has been tested this whole entire season,” remarked the head coach. “I think they are the main reason why we are where we are at this moment, and I think that defense will have to step up again if we want to advance.”

Two of the Crimson’s strongest defensive players include junior goalkeeper Ellie Shahbo, who holds the number one goals-against average (0.35) and save percentage (0.875) in all of Division I field hockey, and Ivy League Defensive Player of the Year and 2021 NFHCA Senior Team select senior Hannah Pearce.

“With our defense like Ellie Shahbo and Hannah Pearce, I think we are in the best position to [win], stay in the moment, and enjoy it as much as we can,” said van Herwaarden. This team has risen to every single challenge that we have faced this season.”

A new challenge the Wildcats may offer is their incredibly strong individual players. Rather than the power dissipating equally across different lines, Northwestern may bank on the talent of exceptional players like Baekers.

“Northwestern is a very, very good team with some very strong individuals,” van Herwaarden commented. “I think that might be the biggest difference from Louisville and [Michigan] which might have been more of a team attack. Northwestern might have a bit of [bank] on individual quality function on some people so that will definitely be a test for us.”

Despite whatever new proposition the Crimson will face on Friday, the team has demonstrated their ability to adapt to any situation presented during a game. Whether that be overtime in a scoreless game, penalty shootouts, yellow cards, or a weather delay due to snow, they have proven that they are apt to handle anything.

“When we had to deal with a man down, and they had man-down situations that we did not capitalize on, yet at the end we became victorious by preparing well,” he said. “We were one step ahead.”

Being one step ahead has not come without putting in the extra hours of intense practice and dedication to be their best. In the shootout against Michigan, the Crimson went a perfect 3-for-3 and Shahbo stopped all three goals attempted by the Wolverines.

“Ellie Shahbo did a great job in shootout defense,” said van Herwaarden. “But we also made ours. I think that had to do with the hours of practice. When all the kids are heading to the showers, our shootout players are still on the field practicing their shootouts and that’s now paying off.”

There is something special about the NCAA tournament thus far: No. 10 Harvard defeating No. 6 Louisville (1-0) and then winning in a shootout against the Big Ten’s number two Michigan (1-0). No. 7 Northwestern defeated the title holders UNC (2-0) and No. 4 Iowa (1-0).

If anything, these high-stake matches have shown that it is anyone’s game.

The Crimson will face the Wildcats in Ann Arbor, Mich. on Friday at 3:00 p.m. If Harvard wins Friday’s game, they will advance to the NCAA championship to play the winner of the No. 9 Liberty/No. 5 Maryland game on Sunday.

— Staff writer Mairead Baker can be reached at mairead.baker@thecrimson.com.