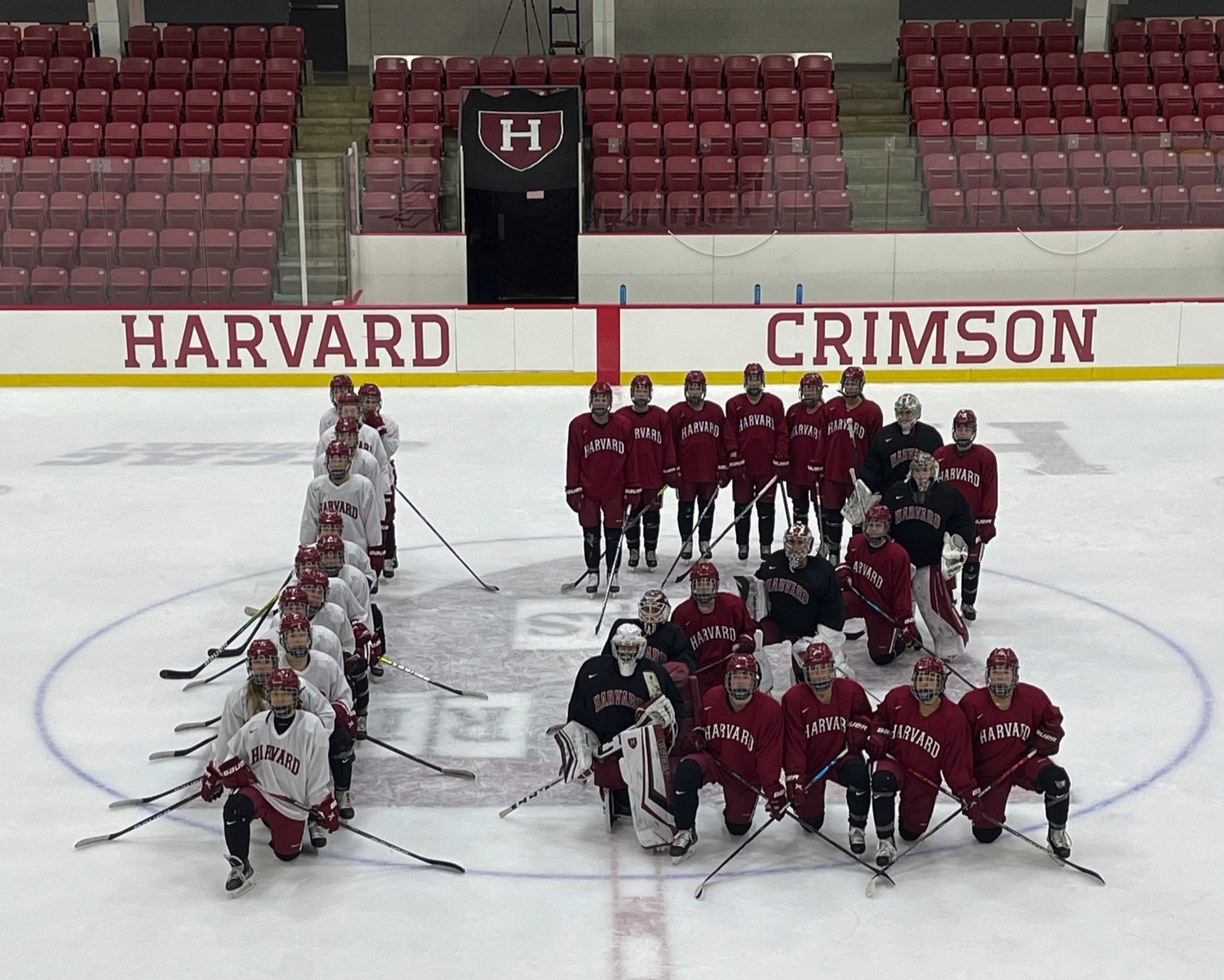 Crimson women's hockey comes together for a team photo in the shape of a 12 at practice. Harvard coaches Katey Stone and Lee-J Mirasolo have pushed for gender equity via tournament expansion for years, and this season, the whole Crimson squad is rallying behind the movement to expand the NCAA Tournament to 12 teams. By Courtesy of Harvard Women's Ice Hockey
By Alexandra N. Wilson, Crimson Staff Writer

The NCAA moved to expand the women’s ice hockey championship from eight to 11 teams earlier this month — a change that followed years of pressure from Harvard coaches, who argued that a playoff expansion would improve gender equity in college hockey.

“The role that Lee-J and Coach Stone have played is literally the center of this because, without them, this wouldn't have happened,” junior defender Kyra Willoughby said. “They've been fully leading the charge behind the scenes for a long time and have dedicated so much time to making this happen. And I think we're all really grateful for them and their work — women's hockey is lucky to have them be part of its story.”

According to Stone, the pandemic presented a unique opportunity to allow coaches from all over the country to meet nationally, which proved to be more productive than organizing large conventions. One virtual coaches meeting in April led to the creation of the Women’s Hockey Bracket Expansion Committee, chaired by Stone. The subcommittee then enlisted the help of the law firm Kaplan, Hecker & Fink LLP to investigate the NCAA’s gender inequities — a move spurred by the March Madness social media campaign, which highlighted significant disparities between the men’s and women’s basketball tournaments. However, conversations about expanding the women’s hockey championship were tabled in September. The movement gained momentum once again when the law firm released the findings of its external review in October.

“The findings show that women's ice hockey was one of the three top sports that had the most inequities across the board,” Stone said. “Not just with tournaments and championships, but a laundry list of other areas and resources that were far and away behind our male counterpart.”

The external review reveals that the NCAA spends about $4.2 million on the men’s hockey championship and $656,827 on the women’s, with $9,805 spent on each male student-athlete and $3,421 spent on each female student-athlete. Additionally, 26.7 percent of men’s teams can qualify for the NCAA Division I Tournament while only 19.5 percent of women’s teams make the tourney.

With the Nov. 10 vote, the circumstances began to shift when the NCAA expanded the championship from eight to 11 teams.

“I think it’s a huge day for women's hockey. It's progress,” Stone said. “As our sport continues to grow, we hopefully will continue to add more and more teams to our championship. The thing that has happened for so long is our sport grew and nothing happened, so this is a great turning point for us.”

Although the championship expansion is promising for gender equity in college hockey, the ruling falls short of advocates’ request for 12 teams, with the NCAA settling on expanding the championship from eight to 11 teams.

“The reason they only gave us 11 is so that our participation matches the men's participation exactly in their national tournament, which we found frustrating because they have had greater participation this entire time,” Willoughby explained. “So now, when we're trying to ask for 12, which is an easier tournament format, they come back to us and say, ‘Okay, well, we'll give you 11 but just so you can't have more than the men.’”

In a press release announcing the move, the NCAA wrote that the expansion will bring the women’s tournament “in line with” the men’s “in terms of access to the bracket.”

“Currently, 41 schools sponsor national collegiate women's ice hockey,” the press release said. “With 11 teams in the bracket, 27% of the teams will have access to the championship bracket. Division I men's ice hockey is sponsored by 60 schools, with a 16-team field (27%) getting to play for a national championship.”

Another reason to push for an expanded championship outside of gender equity is boosting the stakes within the sport, according to Harvard forward Becca Gilmore. With more slots open in the championship, earning a spot in NCAAs seems more attainable and thus serves as an incentive to players around the country.

On Tuesday, the NCAA will hold another vote to decide whether the championship expansion will occur this season or next season. Although Gilmore, a senior, will not directly benefit from the change if it is made for the 2023 tournament, she views this movement as a long-term investment for the sport of hockey.

“[The vote] was just as much for us as for the people that are coming off and playing in future years, as well as the people that have already played that didn't get a fair opportunity to compete at the highest level in terms of the national championship,” Gilmore said.