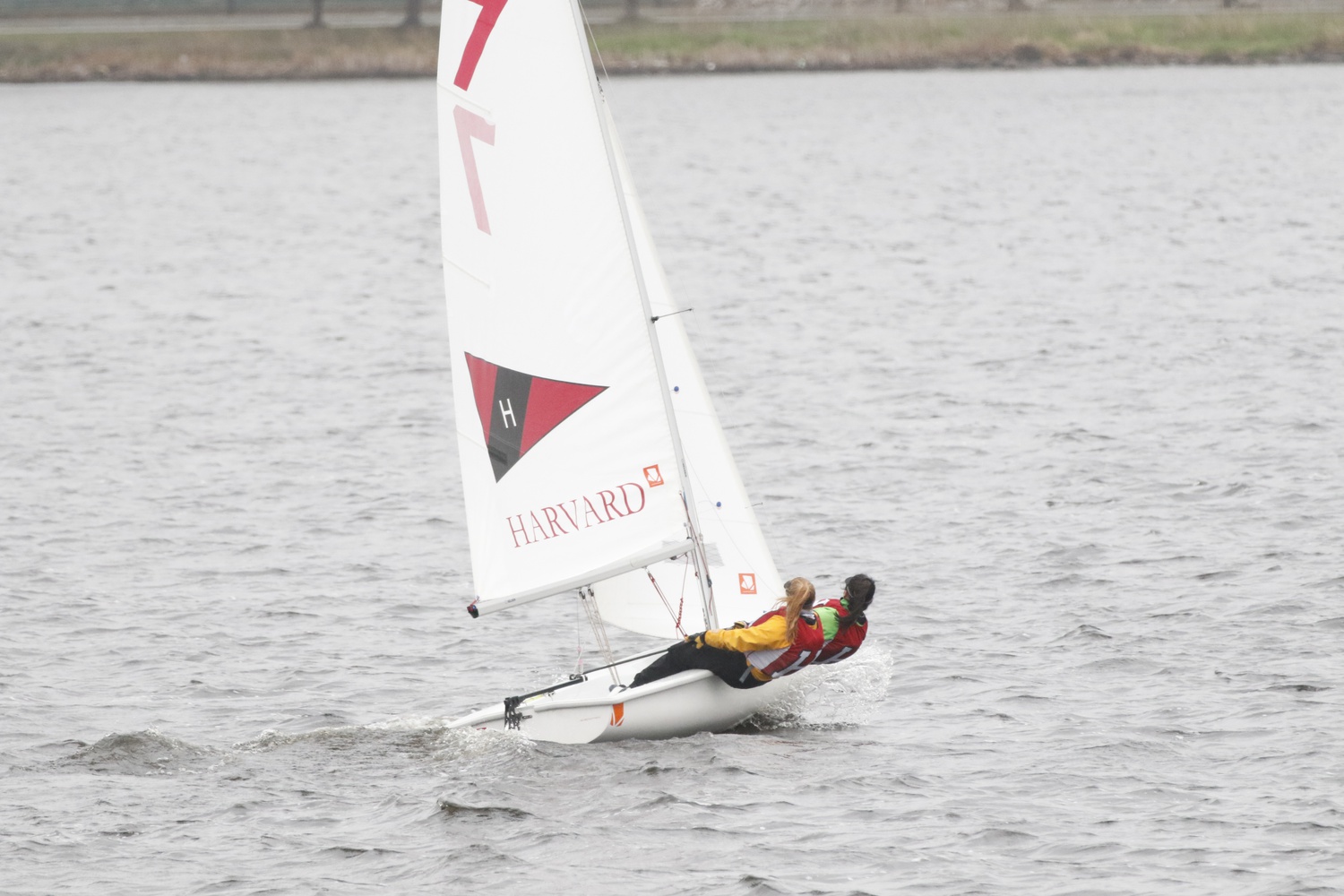 A Crimson duo sails in the 2019 season, Harvard's last complete campaign until the close of the 2021 season, which was highlighted by first-year Sophia Montgomery's fourth-place finish at ICSA Nationals. By Timothy R. O'Meara
By Erignacio Fermin Perez and Derek Hu, Contributing Writers

Harvard first-year Sophia Montgomery’s strong performance at the Inter-Collegiate Sailing Association Women's Singlehanded Nationals on Nov. 6-7 rounded out a strong season for the Harvard sailing team this fall. Montgomery finished in fourth place in a field of 18 sailors who raced on the Chesapeake Bay in Annapolis, Md., placing ahead of all other freshmen who were racing.

Montgomery’s showing at the ICSA Nationals came after the sailing team finished in the top five in five of its final six races of the season. Montgomery said she stayed after practice to do additional training in order to get prepared for singlehanded nationals.

“I prepared by doing extra sailing sessions with the coach at different venues around Boston like the harbor and the river,” Montgomery said.

Montgomery finished with 51 total points in the 14 races.

“Sophia in particular has been a really impressive addition to the team,” Harvard co-captain Emma Kaneti said. “It was awesome to watch her do so well in nationals, and she was the highest-performing freshman.”

“I am looking forward to seeing her come back next year and hopefully take the title,” Kaneti added.

“Everybody is working really hard right now just getting up the learning curve really quickly, so I’ve been really impressed with our entire class of walk-ons,” Kaneti said.

“Senior experience and leadership showed this weekend, which led to our dominance at the regatta,” said Crimson senior co-captain Eric Hansen on Oct. 27

At the Norman G. Reid Trophy Team Race, which was held by Boston College on Oct. 23 on the Charles River, Harvard finished in first place, ahead of Brown and BC. Harvard also won the Lane Trophy Team Race, held at Tufts on Oct. 24. Harvard boats went 24-1 between the two regattas.

At the Yale Women’s Regatta, also held on Oct. 23, the Crimson finished third place with 132 points. Yale won its home race with 78 points, finishing ahead of Brown (128 points).

Compared to other races, Harvard struggled at the Co-ed Atlantic Coast Tournament on Oct. 23, finishing in seventh place. The Crimson had a final score of 139 points, leaving them 43 points behind first-place SUNY Maritime College.

“Sailing — it’s tricky because unlike other sports we have different competitions each weekend, and each of these competitions have different levels of competitiveness,” Hansen said. “We are used to sailing in the river which has flat water and more shifty conditions, whereas the ocean is more wavy and shifty,”

Despite this loss, Harvard overall had a strong performance last weekend, partly due to its practice methods, Hansen said.

“The coaches did a great job of teaching us how to make the boat maneuver smoothly, making sure that our tacks and jibes became second nature, especially given that we have many new people and keeping them up to speed,” Hansen said.

As the sailing team moves into the Spring sailing period, they are eager to prepare and become a better team.

“I look forward to learning how to team race and becoming more comfortable in double-handed boats for the Spring,” Montgomery said.