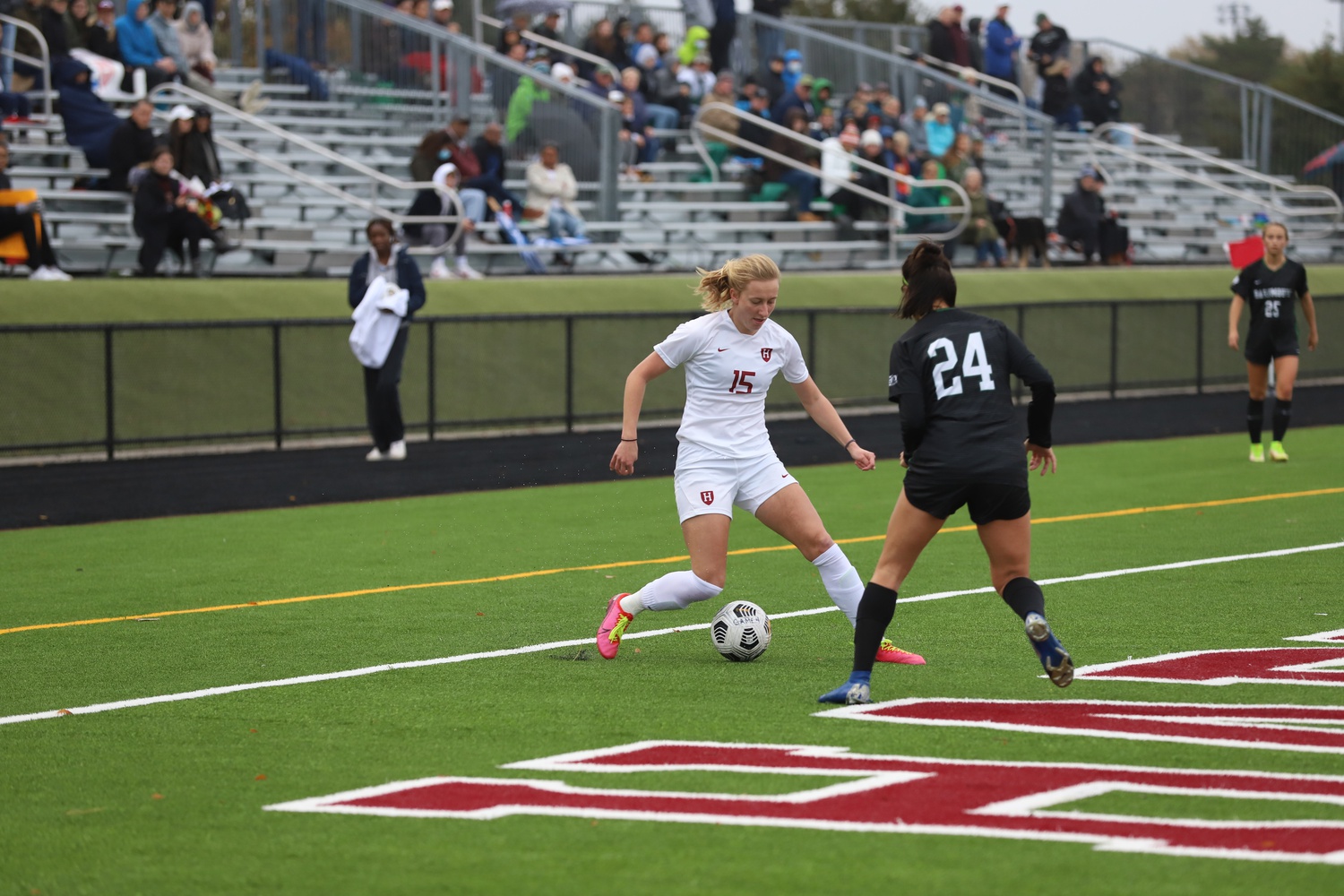 First-year forward/midfielder Nicola Golen controls the ball against Dartmouth on Oct. 30 in the Crimson's last home game. Harvard will be hoping that it still has games to play as it will await the NCAA Tournament Selection Committee's decision on Monday. By Owen A. Berger
By Lev Cohen, Crimson Staff Writer

Harvard responded well to going behind on a brisk Saturday afternoon in New York City, scoring just 38 seconds after Columbia took the lead and adding what turned out to be the game-winning goal on the stroke of halftime to squeak past the Lions, 2-1. The Crimson remained unblemished on the road and will hope that its resume is good enough to send Harvard (12-2-1, 5-2-0 Ivy League) into the NCAA Tournament when the selection committee makes its decision on Monday afternoon.

Before Saturday, the Crimson had only conceded first twice all season: in its two losses, 1-0 defeats to Brown and Princeton. When Columbia (9-6-1, 3-4-0 Ivy) scored in the 28th minute, then, Harvard fans might have expected the worst. A strong press by the Lions’ Ally Clark and Kayla Lee paid off, as Columbia won the ball off of senior Crimson defender Maria DiMartinis in a dangerous position. Lee then sent a looping left-footed cross into the box, where a scrambling Harvard defense left striker Nata Ramirez free to loop home a header and break the deadlock. It was Ramirez’s 10th goal in her impressive first season of college soccer.

But the Crimson’s heads did not drop. Harvard quickly established possession in the final third, where it set up camp for much of a first half in which it took nine shots, including six on target. A cross by sophomore midfielder Hannah Griffin was deflected into the path of first-year midfielder Hannah Bebar, who fired a shot that was clearly heading wide before it deflected off of Columbia’s unfortunate Sophia Cavaliere into the net for an own goal.

Harvard then added a second goal, this one a payoff for the Crimson’s persistent press. Junior Hollyn Torres stole the ball in the Columbia box, took a touch, and then lofted a left-footed shot from a tight angle into the roof of the net as Harvard took the lead less than a minute before halftime. It was Torres’ third consecutive start and her second straight game with a goal, and this one turned into the first game-winning goal of her career.

“It was a battle,” head coach Chris Hamblin said. “We went down a goal, and we weren’t playing our best soccer early in the game, and they capitalized, so we had to respond, and we responded really quickly, which was a great sign. I don’t think we played our best in the first half, but we were ahead at halftime, and then we were able to keep the momentum up in the second half, but it certainly wasn’t an easy win. We had to work for every ounce of it.”

Columbia pushed for an equalizer in the second half, controlling more of possession and generating a decent chance in the game’s final 10 minutes, when a shot flashed wide of the far post. But for the most part, the Crimson was able to keep Ramirez and the Lions at bay. Columbia, for its part, continued to press Harvard well and stayed compact in defense, and the Crimson struggled to generate much offense throughout the game and especially in a second half in which it managed just three attempts and no clear-cut chances to add an insurance goal.

“I think at times we were forcing things,” Hamblin said. "We weren’t being patient enough in attack. As the game went on we started to be more patient and to get at them more. They’re a good team defensively and we had to really work hard today, and we probably will look back at the video and say we could have been more patient in our buildup.”

Now Harvard’s attention shifts to the NCAA Division I Women’s Soccer Committee, which will decide its fate on Monday. The recent history of at-large bids for the Ivy League has not been a good one. The last time an Ancient Eight school won an at-large bid was Dartmouth in 2005, and the Crimson this season is second in line for an at-large bid behind Princeton, so Harvard would need a repeat of 2004, when three Ivy League schools made the NCAA Tournament. Yet Hamblin pointed to the improved quality of the conference as he expressed optimism for a three-bid Ivy League.

“Although historically this hasn’t really been done, I think this year there’s a great chance for the Ivy League to have three [tournament teams],” Hamblin said. “The quality of Princeton, Brown, and Harvard has been consistently strong, and I think we’ve shown that in our out-of-conference competition. The league has changed — the Ivy League of five, six years ago is gone, and we’re now competing at a high level. I’m really hopeful that we’ll have our name called on Monday, and I think we’ve earned that opportunity.”

If the Crimson, which before the win over Columbia ranked 12th in the NCAA’s RPI, does make the NCAA Tournament, its first-round game would be next weekend at a campus site to be determined. Hamblin said that star senior forward Murphy Agnew, who has missed the entire Ivy League season due to injury, could be ready to return for an NCAA Tournament game.