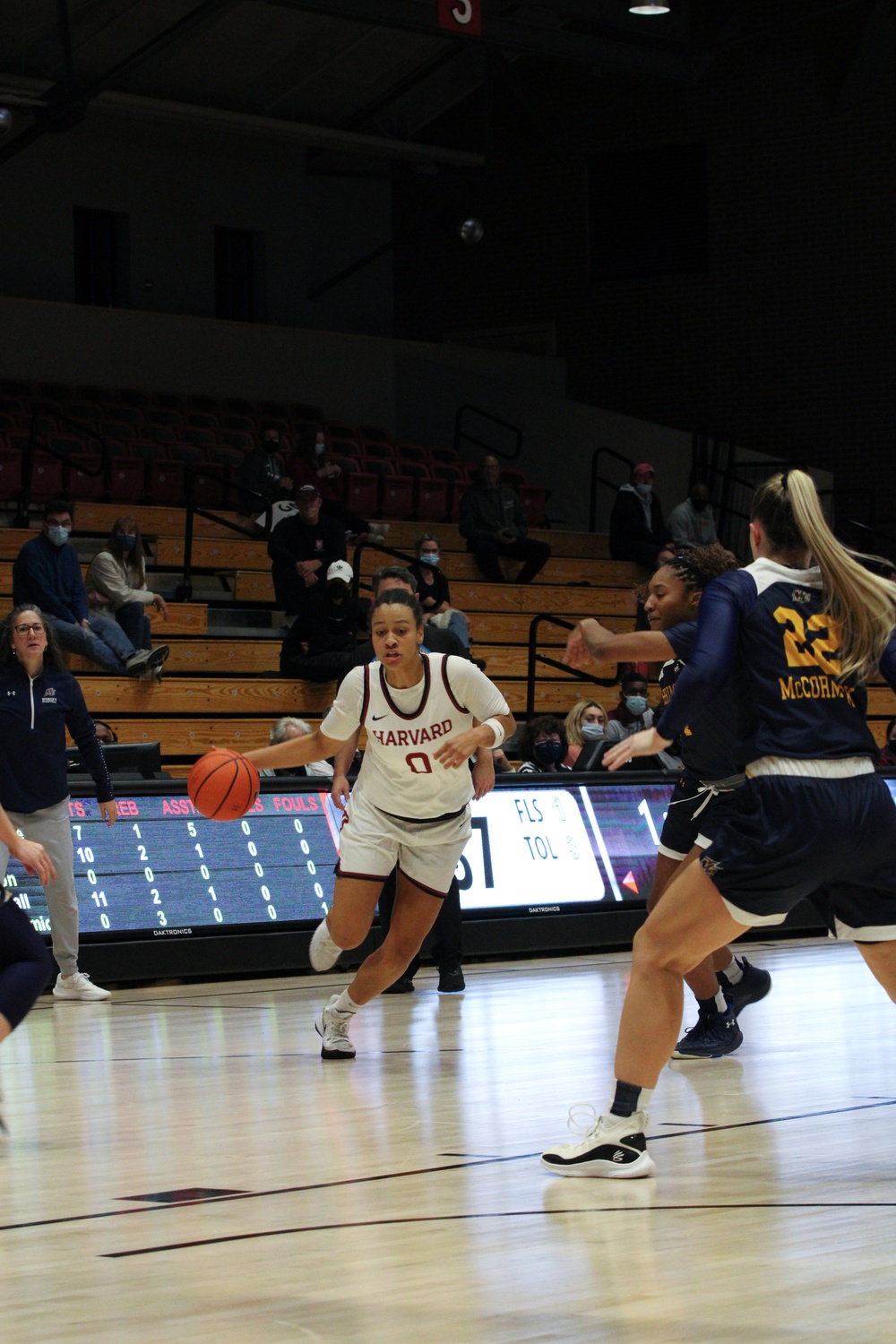 Junior guard McKenzie Forbes drives to the basket in Tuesday’s win against Merrimack. Forbes, who made a game-winning shot in Harvard’s 82-79 win over Boston University on Saturday, followed up the late-game heroics with a team-high 23 points on Tuesday By Owen A. Berger
By A.J. Dilts, Crimson Staff Writer

After splitting its pair of games during the week of Thanksgiving, the Crimson (3-4) returned to the hardwood Tuesday night with a resounding 99-75 victory over the Warriors of Merrimack College (2-4). Harvard carried its momentum from last Saturday’s thrilling 82-79 comeback win over Boston University — which junior guard McKenzie Forbes secured on her go-ahead three-point shot with 3.3 seconds remaining — into Lavietes Pavilion for the squad’s last home game until Jan. 15.

The game began with both teams engaged in a fast-paced, competitive, highly efficient affair in the first quarter. After Harvard turnovers on four straight offensive possessions, however, senior forward Maddie Stuhlreyer’s block on a Merrimack opponent at the two-minute mark provided a spark for the Crimson to pull ahead. Harvard connected on four straight threes at the end of the first quarter and beginning of the second to extend the lead to double digits, 36-25.

While the Crimson held onto a 55-43 lead early in the third quarter, it was the hustle of junior guard Maggie McCarthy that energized her teammates and blew the contest open for a 17-point Harvard lead at the start of the fourth. McCarthy’s dive on the floor to secure the ball for her team, followed by a stout defensive play that forced a Warriors player to double-dribble, led to a triple from senior guard and captain Tess Sussman to keep Merrimack at bay.

From there, junior guard McKenzie Forbes simply dominated on the offensive side, quickly recording 10 of the team’s final 12 points of the third quarter. While both teams traded baskets to start the fourth, hot shooting from Harvard pushed the lead to 20 points, where it would last until the final buzzer sounded at 99-75.

Leading the Crimson on both sides of the floor was the veteran McCarthy, who finished a perfect six-for-six from the field, dished out a team-leading six assists, and hustled after loose balls to secure extra Harvard possessions throughout the night.

“She’s the veteran leader for us,” Forbes said. “She’s not technically a captain, but I think myself and a lot of the team see her as a captain. She’s probably averaging the most offensive rebounds. She’s always the one giving extra hustle plays [and] talking the most. I think that’s just huge for us because it really just keeps us together. Whether we’re playing well, she's adding energy, [and] if we’re not playing well, she’s making sure everyone’s up.”

Not only has the Medfield, Mass., native’s leadership and intangibles earned praise from her teammates, but head coach Kathy Delaney-Smith has also appreciated what McCarthy brings to her 40th and final Harvard squad.

“[McCarthy] is the player that every coach in the country wants to coach, period,” said Delaney-Smith. “She epitomizes a skill set of selflessness and toughness. [...] It’s funny to me, my best shooter [in practice], which is Maggie, she gets five or six shots a game and doesn’t open her mouth. That’s pretty special. She’s just a special, special, special player, and she just cares about winning.”

When looking for what offensive factors played a role in her team’s dominant win, Delaney-Smith pointed to Harvard’s incredibly efficient and voluminous three-point shooting. The Crimson converted 60.7 percent of its 28 attempts for 17 makes from deep.

“Every time they hit a three and we came down and hit a three?” Delaney-Smith joked. “Yep, that’s by design. I’m lying, it’s not by design. But actually, I think subliminally basketball players do that, especially shooters. If you’re going to shoot one, I’m going to shoot one. And I have a lot [of three-point shooters]. I don’t know if you’ve noticed, but I have a lot of people on my team who love the three. Definitely. So we’ve been working on getting ourselves to the basket, which we actually did very well.”

Delaney-Smith’s decision to include five guards in her starting lineup — Sussman, McCarthy, Forbes, sophomore Lola Mullaney, and first-year Harmoni Turner — spaced the floor and produced open driving and passing lanes to the basket.

“We score the ball really well, as you can see,” Forbes said. “I think we have five people on the court at all times that can shoot the ball. And we play unselfishly because of that, and I think it shows up in this stat line for sure.”

Playing five players with the ability to handle the ball in a pick-and-roll, defend on the perimeter, and push the ball in transition enabled Harvard to explode offensively for 99 points.

As evidence of this Crimson lineup’s versatility, Forbes competed for the jump ball at the beginning of the contest, yet she also routinely dribbled the ball up the court and initiated the Harvard offense. From tough buckets in the post, transition layups, mid-range jumpers, and four three-pointers, Forbes’ team-leading 23 points displayed her diverse skill-set.

“I said this to [Forbes] when she got here: she's what this team needed,” said McCarthy about her teammate’s arrival from the University of California, Berkeley. “Having her [on the court] — even for me [when] I'm bringing the ball up — having someone else to rely on, having [Forbes], who’s confident with the ball, confident to shoot [and be] a passer during the game [and] in practice. [It is] kind of like a coach on the court, she has a great [basketball] IQ. But yeah, we always like it when she scores a lot of points.”

The former five-star high school recruit’s contributions to the Crimson can not only be found on the stat sheet, however. As Coach Delaney-Smith frequently notes, having experienced college basketball players like Forbes, Sussman, and McCarthy is invaluable for her young Harvard group.

“[Forbes] is our glue,” she said after Tuesday’s win. “I mean, we’re a very, very, very young team. And we’re also brand new to each other. So it’s great having someone who has the court IQ. She’s a coach on the floor. She knows the game — she plays at a pace that calms everyone down. You can see we get, especially when I put some of the younger kids in, a little frenetic at times, but [Forbes] calms everybody down. Maggie does the same thing, Tess [Sussman] the same way. But those are literally our only experienced players on the whole team. It’s all new people who haven’t played for close to two years.”

Delaney-Smith will lead her young but talented and improving Harvard squad into Tempe, Ariz., this weekend for a pair of games against Colorado State (Dec. 4) and Arizona State (Dec. 5).