Scars of Empire: Harvard’s Role in U.S. Colonialism in the Philippines

Harvard’s legacy of empire and education is one haunted by loss; the instrument used to create this wound lies directly in the University’s hands. But without Harvard, I wouldn't be able to begin putting some of these pieces together.
By Eleanor V. Wikstrom 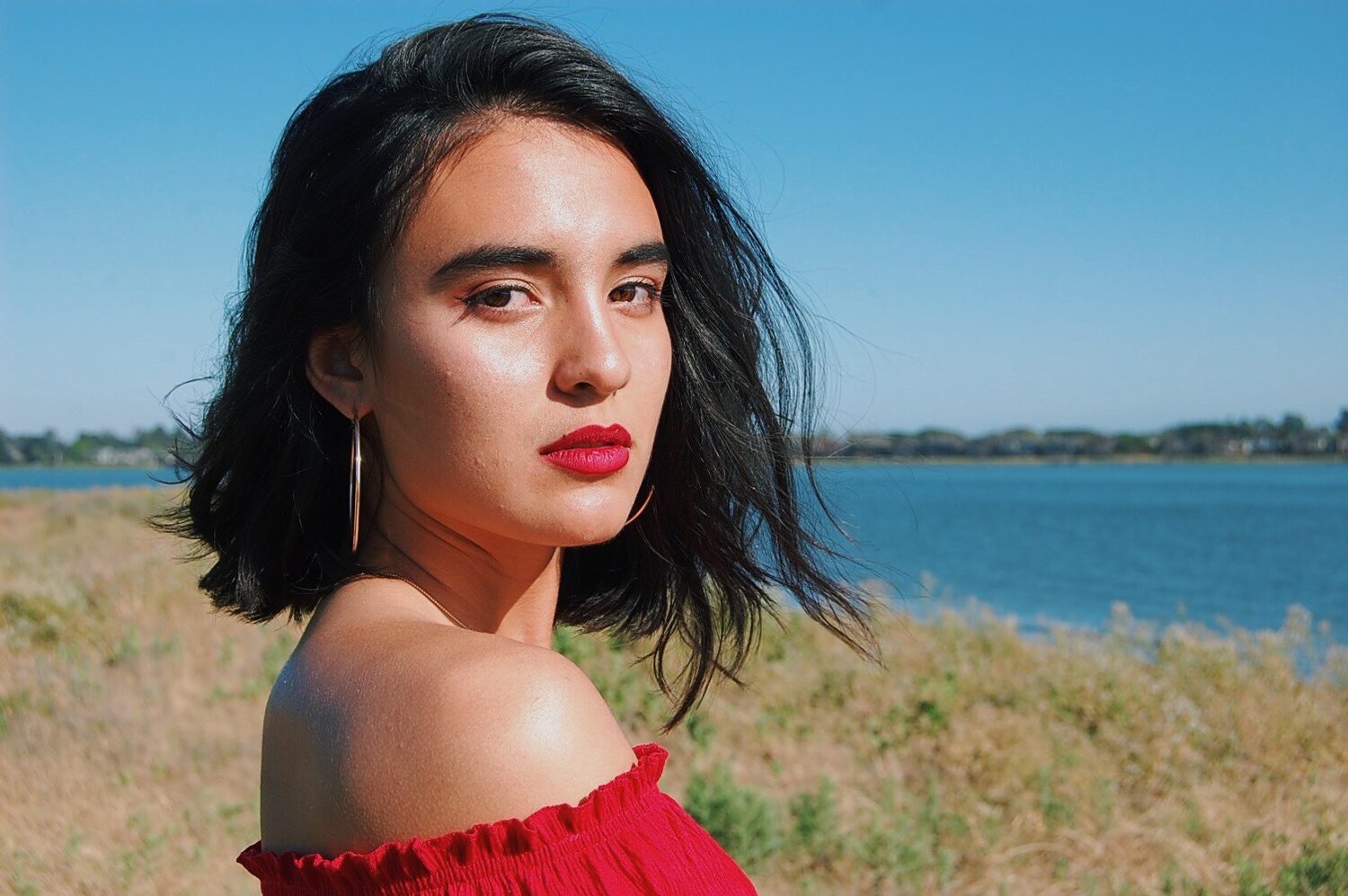 By Courtesy of Clarisse V. Wikstrom

The last time I called Harvard a colonizer, it was a joke. Mostly. This time it’s not.

In early September, I wrote an op-ed discussing how Harvard’s lack of course offerings in Tagalog — the most-spoken language in the Philippines, the fourth most-spoken primary language in the United States, and the native tongue of my mother’s family — and the absence of courses on Philippine history were aligned with a legacy of U.S. colonialism in the Philippines. In my view, this collision of damages was already bad enough. I didn’t think it could get any worse.

When it came to U.S. empire and education, I saw a smoking gun. What I didn’t realize was that Harvard itself would be the one holding it. 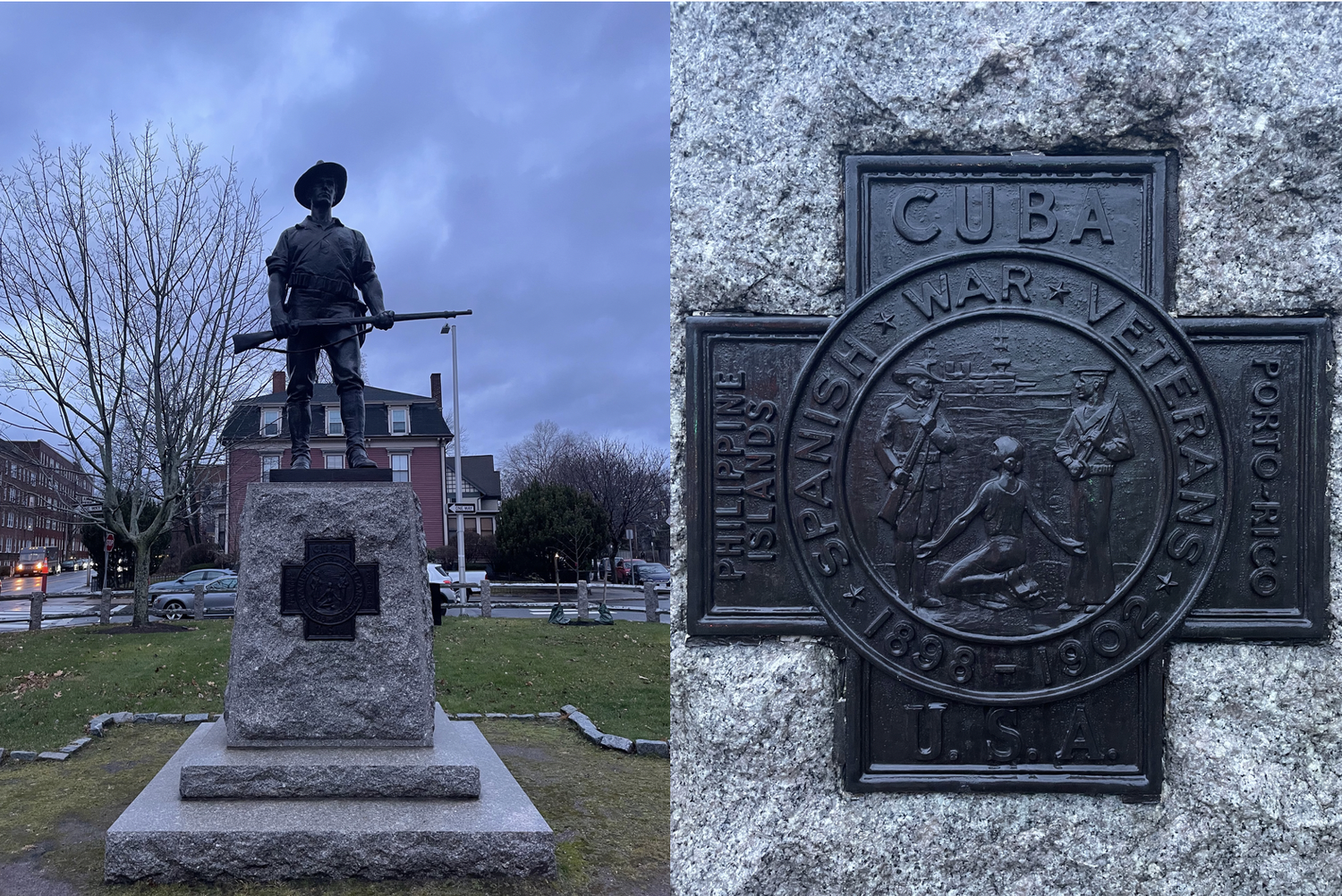 Located at the intersection of Garden Street and Concord Avenue in Cambridge, MA, is a bronze statue of a U.S. soldier holding a rifle. On the front is an emblem for Spanish War Veterans which features a native Filipina woman kneeling at the feet of two U.S. servicemen. The back reads: “This monument erected by the City of Cambridge to her sons who on land and sea defended the nation’s honor in the war with Spain, the insurrection in the Philippines, and the China Relief Expedition 1898-1902.” By Courtesy of Eleanor V. Wikstrom

The origin story of the Philippine-American relationship is one steeped in brutality. Immediately following the U.S. victory in the 1898 Spanish-American War, which featured Manila Bay as the scene of several decisive battles, the United States claimed the archipelago of the Philippines as its own. Philippine nationalists, who had just thrown off the yoke of 300 years of Spanish rule, soon found themselves in a second war for independence against a power who had appeared as an ally only days earlier.

The war against the U.S. invasion of the islands, which the United States framed as a struggle to suppress insurrection, was incredibly violent and racialized — enough so that concepts like the Colt .45 revolver, water torture, and the White Man’s Burden are all counted among the Philippine-American war’s distinct offspring.

The dissolution of Philippine resistance forces in 1902 meant the start of America’s foremost overseas colonial experience, which, despite forming an integral part of U.S. global identity in the twentieth century and beyond, is hardly ever taught in schools.

The tenuous nature of academic memory with regards to this period in history occurs by design. Education itself was an essential tool of the U.S. colonial policy of “benevolent assimilation,” a term which served as merely a facade for an especially pernicious form of subjugation. General Arthur MacArthur, the U.S. Military Governor of the Philippines, himself recommended that investment in education in the islands occur “primarily and exclusively as an adjunct to military operations, calculated to pacify the people and procure and expedite the restoration of tranquility throughout the Archipelago.” The purpose of the U.S. education system in the Philippines was thus inseparable from the aims of U.S. empire: subordination, control, and exploitation.

American soldier-teachers, as they were known in their double capacity, formed an integral part of a system that mirrored domestic projects of education as a form of racialized assimilation for Black and Indigenous students. In the colonial education project, nationalist tellings of Philippine history were villainized or recast as mere folklore; the memory of the brutality of American conquest was subsumed in a narrative of white civilizing benevolence; and the imposition of English as the national language of instruction severed the final links between the people of the Philippines and their own past. Historian Renato Constantino, writing in his landmark essay “The Mis-education of the Filipino,” makes the point of these initiatives clear: “The most effective means of subjugating a people is to capture their minds […] The Filipino had to be educated as a good colonial.”

Recognizing the historical role of education as a site of erasure, colonialism, and global white supremacy is enough to raise eyebrows when confronted with the kinds of gaps that exist in Harvard’s curriculum. But the reality is much worse.

Harvard was specifically responsible for the design of this system.

Upon recommendation from Harvard University President Charles W. Eliot, Class of 1853, Harvard graduate Fred W. Atkinson, Class of 1890, was appointed by U.S. President William H. Taft to serve as the director of education in the Philippines. Atkinson, who viewed the people of the Philippines as inherently child-like and unfit for self-rule, dismissed his contemporaries’ concerns that changing the national language of instruction in the islands would lead to cultural destruction and became the primary architect of English hegemony in schools.

To Atkinson, the role of his education system in maintaining the U.S. overseas empire was a source of pride. “The influence of this American teaching body,” he wrote in 1905, “has been a profound one in the work of pacification which our government has been fostering.”

History, in all of its blur and crookedness, has at least made one thing clear. Harvard administrators and affiliates held a primary investment in not only the conception of the U.S. colonial education project as one of racialized subjugation but also in its material implementation and outcomes. Of the jagged wound that is U.S. colonialism in the Philippines, a gun is smoking in Harvard’s hands.

Skin whitening creams, shame over accented speech, self-denigration of ethnic characteristics. Taken together, these elements are the basis of colonial mentality, a well-documented phenomenon of internalized racism in the Filipino American community that is considered a direct consequence of centuries-long colonial rule.

Illusory debts that cannot be escaped: the assumed imperative of gratitude for U.S. civilizing benevolence, for the blessings of English, for the promise of immigration. Silence as a form of currency. Paying for what was never consensually purchased.

Ahistorical bodies marked by racial confusion: Catholic and colonized by Spain, but not Hispanic. Academically classified under Oceania and located within islands of the Pacific, but not Pacific Islander. Census-defined as Asian and brutalized accordingly during the surge of Covid-19 anti-Asian hate crimes, but not quite the Asian that counts in mainstream representation.

Preordained apologies: When I first saw my grandmother after getting admitted to Harvard, at our annual family Christmas party in Los Angeles, her initial reaction was to squeeze me into a hug and tell me how proud my family was. Her second reaction was to relay a conversation that she’d had with some of our relatives: “We’d never heard of a Filipino going to Harvard!” I predicted that the inertia of this school would tend towards academic and cultural erasure; I accepted this guilt and loss before I even set foot on campus.

Or so I thought.

Since learning about Eliot and Atkinson, I cannot look at this setting the same way. What was once an unresolved discomfort has now become a clearly defined wound, the instrument of which I see clearly in Harvard's hands. I am haunted by specters of loss in the classroom: mouths rounded by the erosion of soft English words, a history crushed and discarded, the figure of obligatory gratitude always watching at the door. In this space, the silence makes my bones ache; history weighs heavy on my throat.

Relationships are fluid and bidirectional; what happened “over there,” spatially overseas and temporally in the past, is undeniably linked to what is happening “here,” in the domestic setting of the present.

Harvard’s investment in white-U.S. empire continues in the educational setting where it began. The College’s silence on the Philippines through gaps in course offerings in Philippine history and the Tagalog language was more than just an accidental oversight, a coincidence of losses. In an objective sense, these gaps are illogical given the practical value of teaching Tagalog and the significance of the Philippine-American relationship throughout U.S. history. The only explanation is that there is more practical value in keeping this knowledge hidden — and in the context of U.S. empire, there is.

This void was preordained. The tool matches the scar. 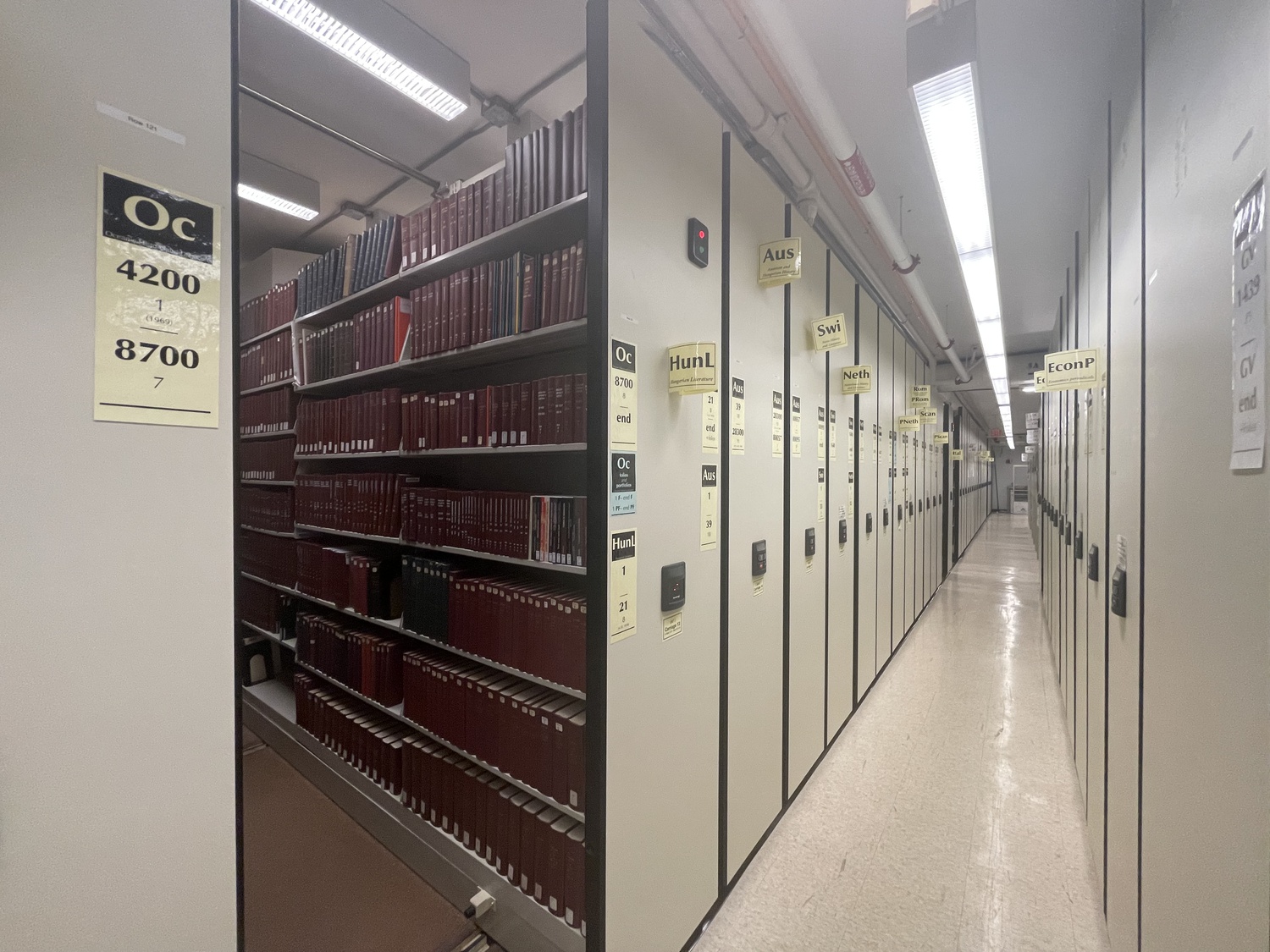 A corridor in Pusey Library Level P3. The Oceania archives section is opened on the left. By Courtesy of Eleanor V. Wikstrom
Advertisement

While researching for this piece, I visited the Pusey Library stacks for the first time. Tucked away in the deepest corner of the sprawling Widener Library complex, Pusey Level P3 is sparse, white, industrial; to access the archives, you have to unlock the shelves on a keypad and wait as the towering rows mechanically groan apart, like stones unrolling at the mouth of a tomb. Alone in the Oceania section, I may as well have been holding a kerosene lamp in the dark, surrounded by something sacred.

I found Atkinson’s book and understood instantly: I was holding an archive that was designed to never touch my hands. I was seeing something that I was never meant to see.

Harvard’s legacy of empire and education is one haunted by loss; the instrument used to create this wound lies directly in the University’s hands. But without Harvard, I wouldn't be able to begin putting some of these pieces together. I am pained by generational loss in this space and yet cannot help but feel joyous at what I have the resources to know, to learn and unlearn, alongside others in the Philippine American community at this school — those petitioning repeatedly for the addition of a Tagalog language tutorial, those teaching courses on Philippine history through Cabot’s ExCo program, or even those contributing in spirit as the hands who interrogated Atkinson’s archive before me, the authors of the annotations in the margins.

The moment to address this wound is now. The recent gift of $45 million dollars to expand the Asian American Studies program, combined with the administration’s own intention to diversify faculty, means that the opportunity to rectify the lack of Tagalog and Philippine history courses has all but fallen into Harvard’s lap.

Harvard is indisputably a leader in education, both within the United States and abroad. If it can begin this process of decolonization in the academic setting, and commit to it as more than just a metaphor, imagine what else is possible. If it chooses to maintain this silence, imagine what this signals about the kind of Veritas that the institution, and education as a whole, should truly pursue.

There is no way to efface a scar, to un-embody the memory of a wound and to forget the agent responsible. When it comes to the legacy of U.S. colonialism in the Philippines, the educational setting may always be marred by ragged edges, tangled tissue, the discomfort of illinear healing. But loss and new growth are intertwined. There is potential here, at the site of erasure, for forward imagination. And it is time for us — and Harvard — to intentionally begin this work.