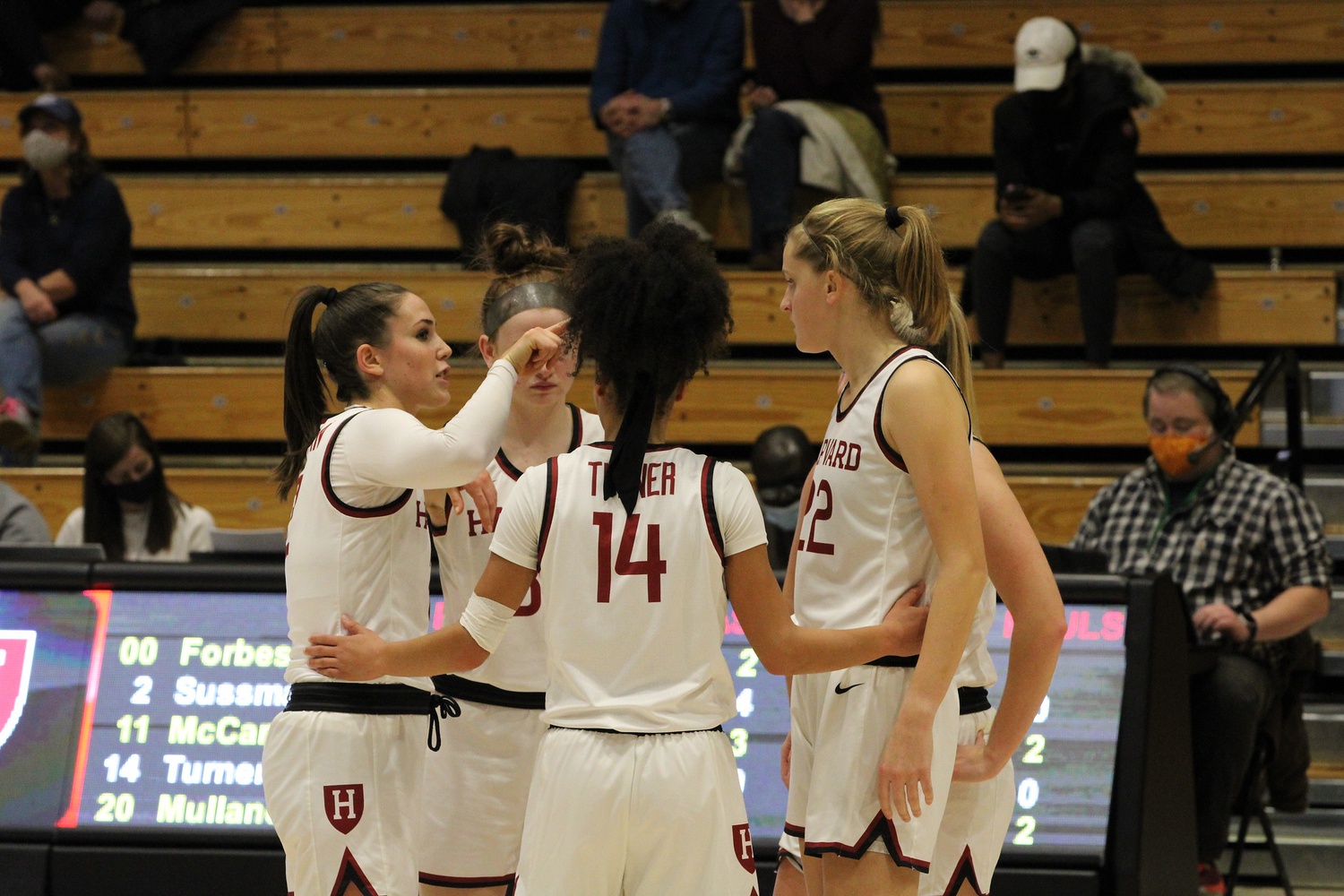 First-year guard Harmoni Turner and the Crimson huddle up in a home victory with Merrimack last Tuesday. Harvard was unable to carry this momentum with it on the road, as it lost a pair of games in the Arizona State Classic. By Owen A. Berger
By A.J. Dilts

After lighting up Lavietes Pavilion for an impressive home victory last Tuesday over Merrimack College, Harvard women’s basketball (3-6) journeyed to Tempe, Ariz., last weekend to face two tough opponents in the Arizona State Classic. While the Crimson fell to the Rams of Colorado State (7-1) by a close score of 59-52, Harvard ran into a high-powered, athletic Arizona State Sun Devils (5-4) squad the following day, losing 91-54.

Harvard’s Saturday matchup with Colorado State was a tightly-contested affair throughout, with the Crimson enjoying a 28-25 lead at halftime and a 46-43 advantage entering the third quarter. Led by junior guard Maggie McCarthy’s 13 boards, Harvard outrebounded the Rams 54 to 37. The effort on the glass extended to the Crimson’s aggressive play on offense, as the team made it to the free throw line 15 times and converted at an 80 percent clip. Colorado State, however, capitalized on Harvard’s 1-for-21 field goal shooting in the fourth quarter to take the lead with five minutes remaining and win by seven points.

On Sunday, Pac-12 power Arizona State jumped out to a sizeable lead, finishing the first quarter with a 21-12 margin over Harvard. After only converting on one of its 11 field goal attempts in the second quarter, the Crimson entered halftime saddled with a 21-point deficit. The Sun Devils extended the lead further in the third and fourth quarters, finishing with a 37-point victory before the 1,500 fans in attendance at Desert Financial Arena.

Despite the pair of losses, the strong play of first-year guard Harmoni Turner provided a bright spot for the Crimson. Turner, a former five-star recruit heralded for her ball-handling and shot-making abilities, led Harvard in scoring in both games with 13 points against the Rams and 18 against the Sun Devils. Although she can continue to improve on her efficiency from the field (Turner shot a combined 32 percent in the two games), Coach Delaney-Smith has taken note of her growth, skill set, and adjustment to playing in a college basketball system.

“[Turner] is growing every [game], she gets better every time she gets on the floor,” Coach Delaney-Smith said. “I'm not sure that always shows in the analytics or in the stats necessarily. Her challenge was being in a system and running offenses and taking her skill set and using it within that system. And she's grown so much in that regard.”

When discussing her team’s performance this weekend, Coach Delaney-Smith noted the difficulty posed by Colorado State and Arizona State’s size, length, and athleticism. This problem especially presented itself against the Sun Devils, who outrebounded Harvard 61-18 and enjoyed a 25-8 margin on second-chance points.

“Both games [this weekend] were tough matchups,” Delaney-Smith said. “We were major underdogs today. Both [Colorado State and Arizona State] were very athletic. We took it on the chin today for sure. We were disappointed. We thought we should be able to put it together to split [the two games] this weekend. And we just were not able to.”

While the Crimson’s five-guard starting lineup of Turner, junior McKenzie Forbes, senior Tess Sussman, junior Maggie McCarthy, and sophomore Lola Mullaney has been able to compensate for their lack of a strong post presence with a high three-point shooting percentage, Harvard shot just a combined 4-for-48 (8 percent) from three during the weekend.

“We played really, really well against Colorado State. [We just] couldn't put the ball in the ocean, but it was a close ballgame [until] the last three minutes. We should have been able to win if we could have put the ball in the basket even a little teeny bit. It was [a] horrific shooting [performance] yesterday, and then today was not much better. We don't have an answer for why our shooting would be so good for two games and be so awful [this weekend]. I don't have an answer for that. I guess the players are gonna have to figure out what their answer is, but we could not put the ball in the ocean.”

Although the Crimson struggled on the court in Tempe, Coach Delaney-Smith came away from the trip excited for the next two weeks of competitive practices and physical recovery for her players. Given Harvard’s youth, these December practices will also be crucial for installing offensive and defensive sets before Ivy League play begins next month.

“We finally will have a stretch of practices where we can get some of our system that we want to get in defensively and offensively,” Delaney-Smith said. “I think those kids that need a break to get healthy and fix some of their limbs will be able to do that. And just the added experience of playing the game together — we'll do a lot of red-white games [intrasquad scrimmages], and I think that'll help us gain some much needed experience playing together. We're actually looking forward to this stretch of practices.”

As the Harvard student body gears up for its final exam period, which runs from Dec. 9-18, the women’s basketball team will similarly focus on ending the fall academic semester strong. Harvard will not face its next opponent, local rival Northeastern University (6-2), until Dec. 19.