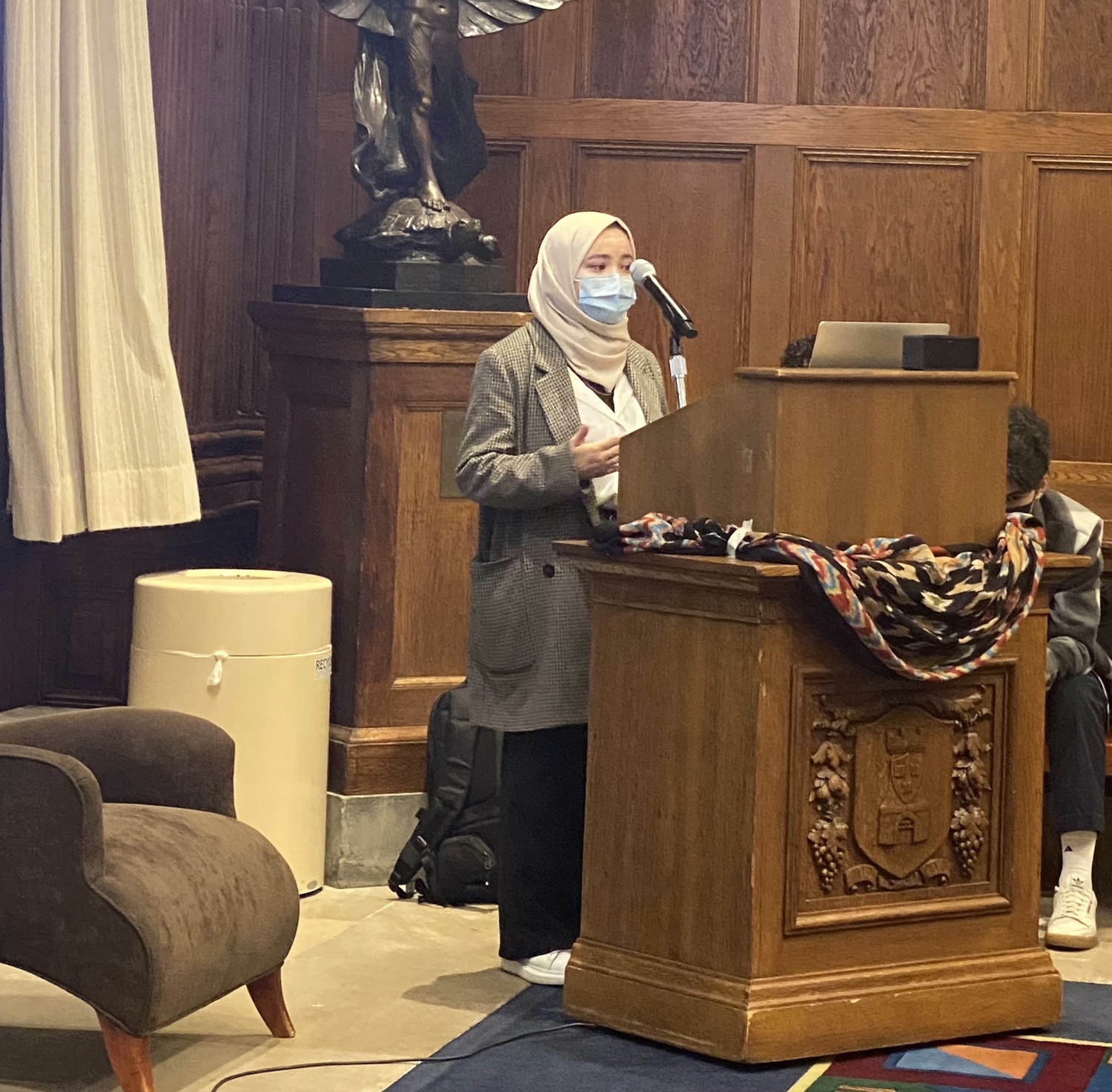 Around 80 Harvard affiliates gathered in the Barker Center for the event, officially titled the Uyghur Culture Fest. The evening included catered Uyghur cuisine, dancing, and calligraphy as well as somber testimonials from those missing family members due to the current crisis.

Uyghurs are an ethnic and religious minority living in the Xinjiang region of China. Human rights groups allege that over 1 million Uyghurs have been held in “reeducation camps,” where they are subject to sterilization, forced labor, and other human rights abuses. U.S. Secretary of State Antony J. Blinken ’84, a former Crimson editorial editor, has accused the Chinese government of “genocide and crimes against humanity” in the current crisis.

Esedulla Uygur, a student at Harvard Divinity School, shared his family’s experience of abuse at the hands of the Chinese government. His father’s abduction led him to grapple with personal and academic challenges, he wrote in the piece, which was addressed to his mother.

“While I’m trying to write my papers, I question whether every piece I write will help me save you and my people from the oppression,” Uygur said. “It’s not easy to sit in the library and study while you, he, she, they, everyone in East Turkestan are struggling.”

Shayida Ali, a Uyghur immigrant who has lived in the Boston area since 2019, spoke about the difficulties she has faced since the abduction of her father and other family members. Because Ali studied abroad, her mother was forced to denounce their relationship to the government, she said.

“I want everyone to know all of these concentration camp victims are not just numbers. They have wonderful families. They had a happy life before that, and they deserve to have a good life again,” Ali said.

For Ali, a major challenge has been acting as a “happy, wonderful mom” to her newborn child in the U.S. while facing anxiety and “emotional challenges” following the disappearance of her relatives at home.

“How will this end? I always question myself living in the free world, how can we stop this?” Ali asked.

The evening also featured a presentation on Uyghur language and history and a poetry reading from Munawwar Abdulla, a lab manager in Harvard’s Department of Human and Evolutionary Biology.

In an interview prior to the event, Joshua Moriarty ’21-’22 said HRWG — which is sponsored by Harvard’s Committee on Ethnicity, Migration, Rights — hopes that the celebration prompts attendees to engage with Uyghur culture and learn about the group’s ongoing struggles.

“We think that it’s critically important to engage with and to celebrate Uyghur culture now, because it’s being actively suppressed and even threatened with destruction in the Uyghur homeland,” Moriarty said.

Moriarty, who is an HRWG coordinator, said there has been “minor pushback” from those who disagree with the use of the term “genocide” to describe the treatment of the Uyghurs. Still, he said the event has generally been received with support on campus.

The event raised nearly $600 for the Boston Uyghur School, a New England-based nonprofit founded in 2019 that aims to preserve Uyghur language and culture.

Rym El Mahil ’24, who attended the event, said the speeches were “heartbreaking” and served as a call to action.

“To hear firsthand the stories of people who are still undergoing this loss of family members, it was infuriating, it was incredibly saddening,” El Mahil said. “And it just makes me want to do what I can in any way possible.”