Committed: How Harvard Basketball Has Recruited in a Pandemic 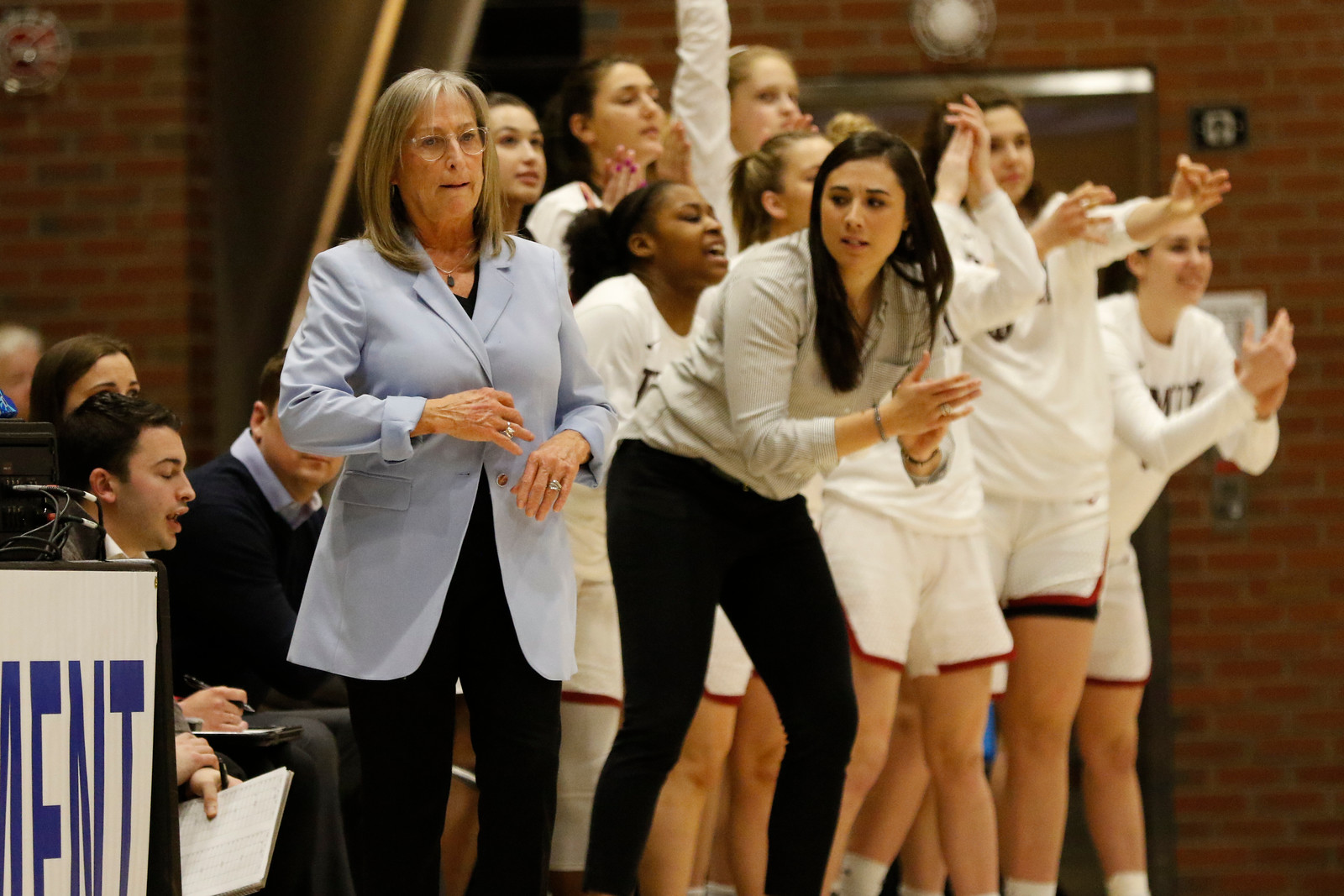 On the morning of Tuesday, March 10, 2020, the Ivy League basketball season came to a screeching halt. The men’s and women’s Ivy League Basketball Tournaments, set to take place at Harvard the upcoming weekend, were canceled, with the regular-season champions, the Princeton women and Yale men, receiving automatic bids to the soon-to-be-canceled NCAA Tournament. In scrapping the tournaments, the Ancient Eight was the first college basketball conference to call a premature end to the season. The then-contentious decision was followed by a cascade of cancellations as the country began to grapple with the Covid-19 pandemic.

A year after the cancellation that shocked the college basketball world, most conferences are holding tournaments again as the sport gears up for the return of March Madness. Not the Ivy League, however. Again exercising the caution that briefly made it sports’ leading story last season, the Ancient Eight last November became the only NCAA Division I conference to cancel all winter sports, including men’s and women’s basketball, due to Covid-19 concerns. While most of the college basketball world has enjoyed a return to something approaching normalcy — albeit mostly fan-less and with a handful of Covid-19 related game cancellations and a series of health and safety protocols — the Crimson has remained on the sidelines.

But while there has been no on-court activity at Harvard this year, the basketball programs have hardly taken a year off. Throughout the entire calendar year, Crimson basketball coaches spend considerable amounts of time engaging with prospective high school athletes in the hopes of securing their commitment.

For 2021, the men’s team has landed what is currently the 49th best-recruiting class in the country according to the scouting service 247 Sports, which is best in the Ivy League and in line with some of its stronger recruiting classes in recent years. That includes prospects from Massachusetts, Illinois, Arizona, and South Carolina, evidence that, at least for the 2021 class, the pandemic has not kept Harvard from recruiting across the country.

Associate Head Coach Mike Roux, who leads recruitment for the women’s team, detailed a recruiting process that takes place over a few years. Prospects are identified early in their high school careers and get to know the program over the course of many conversations. The process then intensifies during junior year, when potential recruits take SATs and ACTs and the coaching staffs begin to determine which students might fit in both on the court and in the classroom.

“As they move into their sophomore and their junior year,” Roux said, “it starts to get a little more heavy in terms of recruiting and trying to get kids on campus and trying to have them understand who Harvard is and what our basketball program is all about.”

Alongside the personal connections built early on are evaluations from the coaches, who travel the country to see potential recruits, particularly during the April of and July after their sophomore years.

“The way AAU has progressed over the last probably ten years, there’s no one tournament anymore like there used to be 15 years ago that you could go to and see all the best players,” Roux said. “You do kind of have to scour the country, and during the month of July, our staff is all over the place. We’re in every corner of the country — we’re everywhere.”

For the class of 2021, most of this had been completed by March 10, 2020. Men’s Assistant Coach Brian Eskildsen explained that as far as the 2021 class, the Crimson, by virtue of its early pre-pandemic recruitment, was not impacted as much as other programs might have been.

“We were fortunate that we are out ahead of the game,” Eskildsen said. “We had those guys on campus, they had already spent time with our players, they had already seen what campus looked like. And so when everything shut down, we were actually ahead of maybe some other schools because [the prospective players] had a really good feel for who we were, and what Harvard was about.”

In recruiting the class of 2022, however, Harvard basketball has had to embrace the new elements of recruiting in the pandemic. With the NCAA extending its recruiting dead period through May 31, 2021, college basketball coaches across the country have been unable to meet with players in-person. Unable to welcome recruits to campus, the Crimson coaching staffs quickly adjusted by increasing phone calls, providing virtual campus tours, and holding Zoom meetings with players and their families. For a university that prides itself on its vibrant community, however, the lack of in-person recruiting has unavoidable shortcomings.

“We've had to try to find some creative ways to get all of our information about who we are as a program to the prospects and their families without them ever setting foot on campus,” Eskildsen said. “I don't think it's as easy for guys to get a feel for what our players are like, you know? When they're on campus, they get to see that our guys [...] like the same music, they play the same video games. You know, they're very similar as people and they love basketball.”

The inability of coaches to watch players compete in live settings has also affected the recruiting process. While reviewing recruits’ game films has long played a prominent role in evaluating a player’s talent, the importance of identifying talent through film has significantly increased in the past year.

“We haven't gotten to see them at practices or games in their high school seasons, [but] we've gotten a lot of tape,” Eskildsen said. “So it's gone virtual, where we were always watching game film that we were [...] getting sent to us, but that has been amplified. Because that's the only thing that you can do from a talent evaluation [standpoint].”

Despite the challenges posed by recruiting almost entirely through digital platforms, the past year has also provided opportunities for Harvard’s basketball programs to improve their outreach to players. As women’s Head Coach Kathy Delaney-Smith explains, the introduction of more digital recruiting practices has increased her program’s flexibility when communicating with recruits.

“I would credit [Coach Roux] and other staff members who have worked really hard putting together a PowerPoint. It can encompass anything from the virtual tour of Harvard to the virtual tour of the athletic facilities to ‘meet the coaches’ to the projected future we see for you as a basketball player in our program,” Delaney-Smith said. “I think this is something where, if I had it 20 years ago, we would have maybe gotten some more big-time players because it’s really quite, quite good.”

With new dimensions of basketball recruiting opening up more creative ways to hit the recruiting trail, the coaches all agreed that it is likely that many of these techniques, such as Zoom presentations, will last into the future. But while the shift to more digital recruiting strategies may persist, Crimson coaches remain excited at the prospect of interacting with players on campus and in live competition once again.

“For all of us in college coaching, we’re looking forward to the day when we can go back out and recruit and see kids play live,” Roux said. “As much as all this stuff will stick, there’s still no replacement for your own two eyes watching a kid play live and seeing everything that goes on around that. I think everybody’s looking forward to that day.”

According to Eskildsen, even the absence of Ivy League basketball this year has not been a major drag on recruiting.

“I think it's been hard for us in terms of the Ivy League schools, our basketball product hasn't been available for them to see,” Eskildsen said. “But ... if anything, I think people recognize how quick the Ivy League was to cancel the tournament back last year. And I think seeing that for putting the players and their health and safety first and foremost is a positive.”