With Players Scattered Across the Country, Men’s Hockey Prepares for Uncertain Post-Covid Future 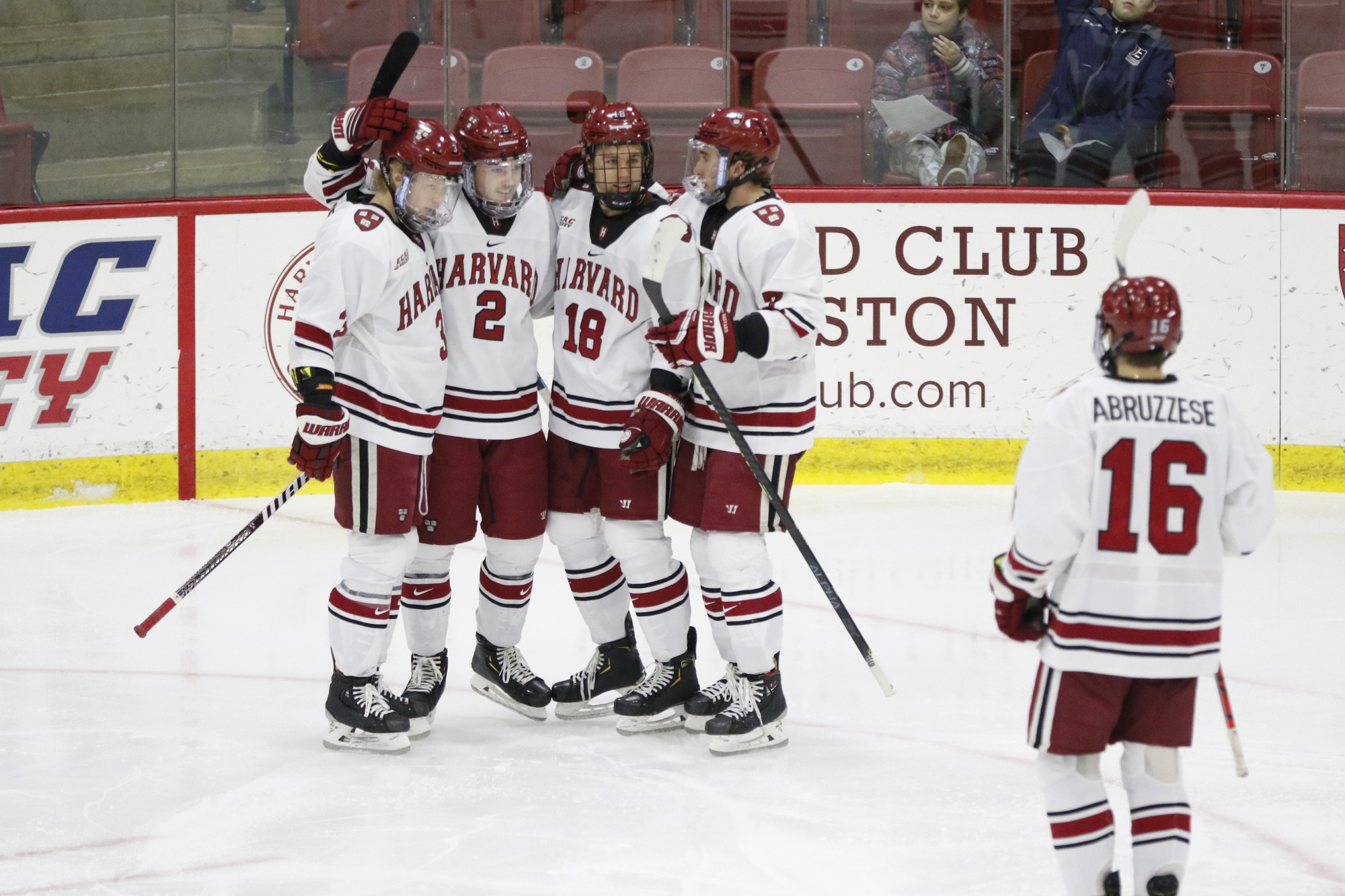 The Crimson offense comes together to celebrate a goal against St. Lawrence on March 7, 2020. The players did not know it at the time, but the 7-1 victory over the Saints just a year ago remains Harvard's last game played. By Timothy R. O'Meara
By William C. Boggs and Jasper G. Goodman, Crimson Staff Writers

As the Harvard University men’s hockey team departed the Bright-Landry Hockey Center around one year ago, most players and coaches did so still holding high hopes for next season.

Today, many still do — but the anticipation has to wait at least a year longer than they may have expected.

As the coronavirus has upended sports in the Ivy League in the year since Covid-19 emptied Harvard’s campus last March, canceling an entire year of athletic competition and reforming rosters throughout the conference, the men’s hockey team has dispersed around North America.

Today, as much of college hockey gears up for Covid-era conference playoffs, Harvard players are training in junior leagues and working out with private coaches in all corners of the country. Like the rest of the Ivy League — which canceled all three athletic seasons due to the pandemic — Harvard has watched from afar as many of its non-Ancient Eight opponents play on with restrictions through a pandemic-stricken season.

“I think anybody involved would say that it is difficult and at times can be frustrating,” Harvard men’s hockey coach Ted Donato ’91 said last week. “You realize the opportunity that is passing by for these young student-athletes.”

“On the other side of it, you really fight to have the perspective to say that the health and the safety of our student-athletes come before everything else,” Donato added.

‘All Across North America’

Over the past year, players on the Harvard roster have spread across the continent. In fact, in the spring 2021 semester, no men’s hockey players are living on campus, including those allowed on campus per the university’s guidelines. Many of the under-21 players have returned to junior hockey to compete for teams across the midwest in the United States Hockey League.

“They’re age-eligible, and there’s this structure, really,” Ted Donato said. “To me, that’s what everybody’s in search of, to be able to have some structure where it’s safe and they still have an opportunity to play and compete.”

Players over 21, however, do not have the advantage of meeting junior hockey’s age cut-off. While the Crimson USHL-ers have been able to participate in real games against other Division I-caliber players, the older members of the Harvard squad have regrouped more informally.

Jack Donato, who completed his junior season last March, is currently in Florida, along with more than half of his teammates. In the Tampa area, the Crimson skaters have been training under Brett Strot, a former assistant coach for the U.S. Women’s National Team who served on a staff that saw the American women capture the 2017 International Ice Hockey Federation Women’s World Championship gold medal.

With Strot — who currently coaches at the United States Premier Hockey League level — the Harvard players have been skating alongside other Ivy League student-athletes who had their seasons canceled, including skaters from Brown and Dartmouth.

In fact, Jack Donato said the Ivy rivals are sometimes able to line up by team during drills.

“It's been great. These kids from other schools are awesome, but it is competitive,” Jack Donato said. “You definitely get that school pride aspect into it, and it’s fun.”

Some of the players who maintain juniors eligibility have also spent time in Tampa Bay. Despite playing for USHL teams and the United States World Juniors Squad that captured gold in January, sophomore forward John Farinacci and sophomore defenseman Henry Thrun both spent some time training in the Sunshine State, according to Coach Donato.

When the Crimson returns to the ice, they will do so with an unprecedented level of roster turnover. If the 2021-22 season starts as planned, two full classes will enter it never having worn a Harvard sweater.

“I think for our team, the biggest issue is going to be just finding our footing right away,” Jack Donato said.

“You’re going to have potentially half of your team playing their first game in October,” he said. “The good news is that the rest of the Ivy League is in the same boat.”

Jack Donato was one of just three players who opted to take the year off. Five more opted to leave the team for professional hockey.

While Jack Donato is one of three Crimson skaters who opted not to enroll academically this year to preserve eligibility, he was the only class of 2021 player to do so. Four other seniors decided to enroll and will graduate as scheduled in May. Under the Ivy League’s temporary policy adjustment that will permit graduate students to partake in the conference’s first season back in play, these seniors would technically be eligible to appear next year if they enrolled in a Harvard graduate program. At this moment, however, there are not any members of the Crimson roster that plan to take advantage of the amendment.

The Crimson will also bring back players who have taken part in differing training regiments during the year off.

“When you have guys within your program, as a program, and as a coaching staff, you have a certain way you want things done,” Ted Donato said. “You have certain fundamentals that you feel that you have as a coach that you want your team to abide by, and kind of use as a compass. And sometimes that’s a challenge when you have guys that are coming from other teams and other disciplines.”

The roster ramifications began even before the academic year. Last year, the five Harvard players who had been drafted by NHL teams decided to forego their remaining eligibility in addition to not enrolling academically. Ted Donato said that four of the five players who departed for pro hockey had indicated that they were planning to return to Harvard before the season was officially canceled.

“The fact that we weren’t going to be on campus and having a season had a significant impact on those decisions,” Ted Donato said.

Jack Drury, who was drafted by the Carolina Hurricanes in 2018, has spent the season in the Swedish Hockey League after departing Harvard as a rising junior. In his first 35 games for the Vaxjo Lakers HC, Drury has put up 25 points, including 10 goals.

Other players who decided to go pro early have seen limited playing time. Jack Rathbone (Vancouver Canucks), Jack Badini (Anaheim Ducks), Henry Bowlby (Florida Panthers), and Reilly Walsh (New Jersey Devils) have all seen limited action for their respective organizations’ American Hockey League affiliates. Of the group, Walsh has appeared the most at the AHL level, with 9 games played as of March 9.

Donato, who is expected to return for his 18th season behind the Harvard bench next winter, said he remains “very optimistic” about the team’s prospects when it returns, despite the challenges of regrouping.

“I’m extremely excited about the team’s potential and possibilities next year,” he said. “I do think there are a lot of reasons for optimism. Although very inexperienced, I think we can be very talented and exciting, and I’m looking forward to that.”