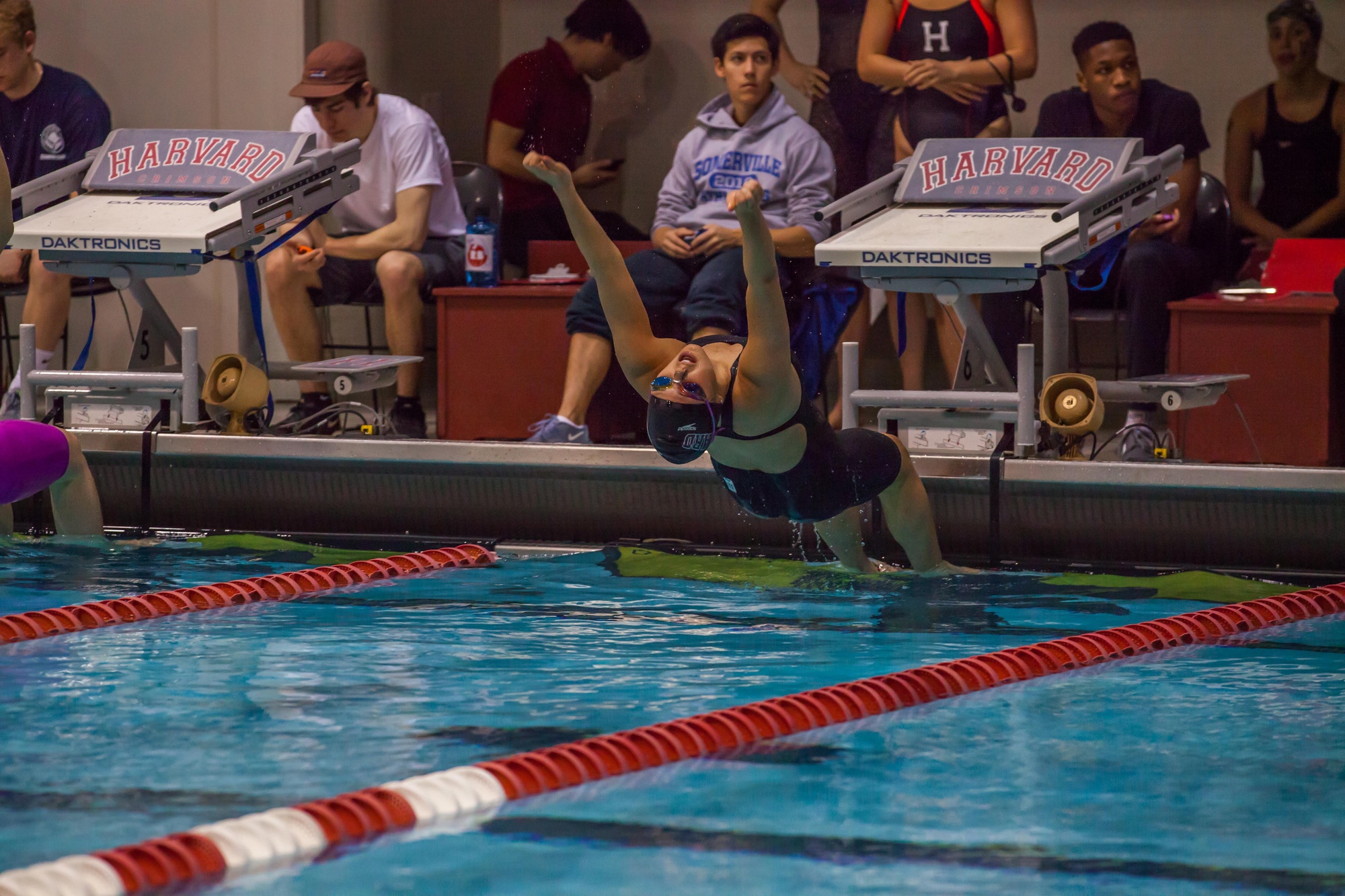 Tri-captain Cassandra Pasadyn explodes off the blocks into the backstroke. With the swim and dive season canceled this year, Pasadyn did not have the opportunity to get off the blocks, in part leading her to activate advanced standing and graduate early. By Courtesy of Cassandra Pasadyn
By Marlee Masters, Crimson Staff Writer

Amidst the Ivy League’s decision to cancel fall, winter, and spring contests, Cassandra Pasadyn of the Crimson Women’s Swim and Dive team made the difficult decision to activate her advanced standing — an academic process that allows for early graduation — and forego her eighth semester at Harvard. Rather than say goodbye to her team and sport at the 2021 Women’s Swim & Dive Ivy League Championship that was scheduled to take place at Harvard’s Blodgett Pool this spring, the now alumna said her goodbyes from her home in Hinckley, Ohio, last summer.

The Eliot House resident has contributed to the women’s swim and dive program in and out of the pool. In her first and second seasons with the Crimson, the team won back-to-back Ivy League Championships. Posting impressive times in the 100 (0:55.44) and 200 (2:00.74) yard backstroke, Pasadyn was especially influential in the 2019 Ivies victory. In her third season, Harvard achieved Ivy League runner-up status. In 2020, Pasadyn was elected tri-captain.

In November, the Ivy League officially canceled 2020-21 winter sports, officially ruling out the chance that Pasadyn could return to the pool in her regularly scheduled senior year. The coronavirus pandemic and Harvard’s subsequent decision to cancel athletic competition caused Pasadyn to “take a step back” and think about “what this meant for [her] senior year… and long term future.”

Advanced standing allows eligible students to convert Advanced Placement (AP) test scores to Harvard College course credit. Having completed her concentration, secondary, and general education requirements, the course credit made it so that Pasadyn could graduate in seven rather than eight semesters. Pasadyn already had the credits in place, but it was just a matter of formally taking advantage of the advanced standing process. In her own words, activating her advanced standing made the most sense “financially, logistically, and even emotionally.”

The integrative biology concentrator has spent what would have been her last semester at the University interviewing for medical school. Pasadyn plans to matriculate in the fall and says that “this extra semester [was] a gift of time to pause, reflect and truly take a break from the pace of life.”

The NCAA does not allow unenrolled student-athletes to formally meet with teammates and coaches. The tri-captain’s decision to activate her advanced standing and unenroll in the spring, however, was well-received by both parties. Her coaches and teammates made announcing her decision “easier than [she] could have imagined.” Although as an unenrolled athlete she cannot officially call herself captain this semester, Pasadyn is determined to retain close relationships with her teammates and coaches — whom she refers to as her “second family” and “support system.” Cassandra is not the only Pasadyn on the women’s swim and dive team; her younger sister, sophomore swimmer Felicia Pasadyn, will graduate in 2023.

Reflecting on her experience over the past year, now alumna Cassandra Pasadyn has some advice for other student-athletes finding themselves in similar circumstances.

“My season getting canceled made me realize that sport isn’t everything, but the team can still be… These relationships are friendships that will last a lifetime. This is just one season, but your team and the memories that you’ve made in this sport will go way beyond this pandemic.”

— Staff writer Marlee Masters can be reached at marlee.masters@thecrimson.com.