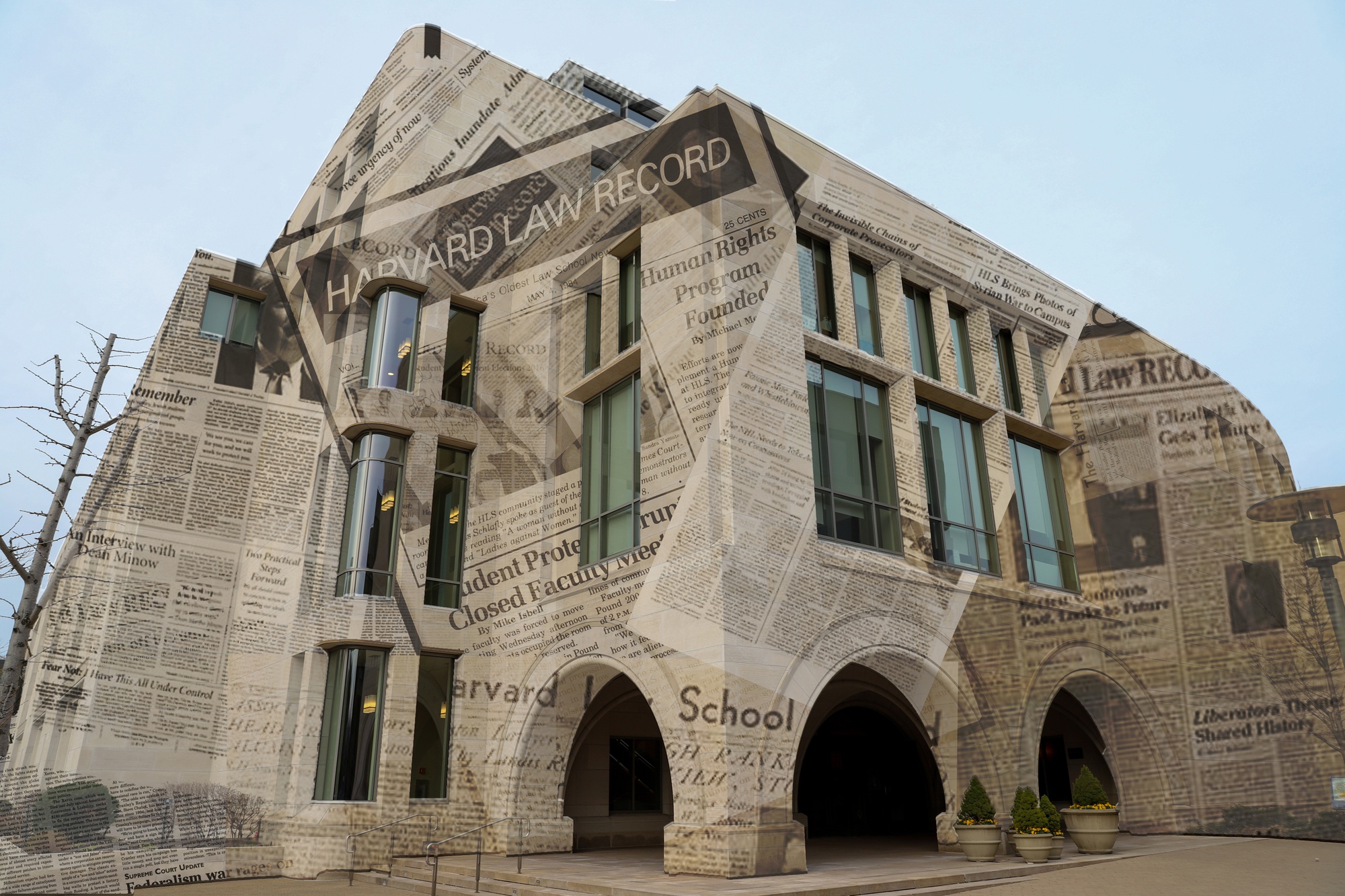 “It is actually read, it is actually discussed, and it actually changes conversation,” Barlow said, reflecting on his time at the Law School.

Harvard Law School is famed for its premier student-run journals, manifold in both scope and speciality. From the esteemed Harvard Law Review to the Harvard Human Rights Journal, these publications offer law students the opportunity to sharpen their editorial skills while strengthening their candidacy for prestigious post-grad careers.

The Harvard Law Record — an independent, student-run, nonpartisan newspaper — is a different sort of publication. Previous and present leadership of the Record said its unique legacy lies in its ability to forgo the tedious pleasantries of traditional legal scholarship and foster open, often controversial conversations that are at the forefront of campus debate.

Throughout its history, the Record witnessed momentous events in both American and Harvard Law School history, and continues to undergo various degrees of popularity and relevance on campus. Former editors and contributors argued the Record must endure to ensure that free, honest discourse remains a reality at the Law School.

A Decades-Long History of Independent Journalism

On Wednesday July 17, 1946, the Harvard Law Record published its first paper. One of the inaugural volume’s editorials described the Record as “primarily a journal of opinion.”

“It will strive to become a forum for the Law School, its topics ranging the gamut of public interests — sociological, governmental, economic, philosophical, political, moral, international, constitutional and so on, as well as discourses more directly legal in the old cramped sense of the world,” the editorial read.

The Record’s emphasis on expanding both the scope and depth of discourse at the Law School continued past its introductory volumes.

Nader, a former editor-in-chief of the Record, published a piece in May 1956 which detailed the plight of Native Americans and their battle with systemic injustice at the hands of American law and society.

In his article, Nader argued that both historical and fictional accounts of Native Americans “instilled in the American public a misinformed and highly inaccurate view” of the peoples. He also discussed the Indian Reorganization Act of 1934, which Nader said “finally halted” the “impending destruction of tribal cultures” but was still implemented imperfectly.

Nader said he believed the Record to be an important platform to discuss such pertinent subjects. But as its free copies piled up in Harkness Hall, he said many of his peers did not regard the Record with the same importance.

Robert Z. Mahari, current president and former editor-in-chief of the Record, said what makes the newspaper “special” is its mission to provide a “neutral place for discussion” at the Law School.

“There are things that I think are missing from the classroom, discussions we don’t have because they might not be appropriate in the classroom or we might worry about voicing certain opinions,” Mahari said.

Throughout its history, the Record has seen an ebb and flow of campus popularity and relevance.

“There needs to be leadership to really spearhead it, someone who cares deeply about it and has the time to dedicate to it,” he said.

Michael E. Shammas, former editor-in-chief of the Record, said he believes there are two primary functions of the newspaper: publishing stories that Harvard Law School “would not talk about” and fostering a platform for open discourse amongst students and faculty, similar to a “Socratic dialectic.”

“Let’s say someone submitted a piece that another person disagreed with, I would publish a response,” Shammas said. “That started a dynamic which I thought was pretty valuable.”

But not all students were interested in going on the record with their opinions, he said.

“There’s a lot of Harvard Law students who, they’re already anticipating their future Senate confirmation hearing,” Shammas said. “The Harvard Law Record does not tend to attract people who worry a lot about what they say.”

Katherine J. “Kate” Thoreson, a previous editor-in-chief of the Record, said many “uniquely qualified” law students were “really reticent” to contribute to the Record or “publically express any views.”

“It’s sort of a limiting principle,” she said. “If you’re going to work at a big law firm, sometimes you don’t necessarily want to be loud about certain things, so people tend to be really cautious.”

Thoreson said she repeatedly asked peers whose views were not represented in the paper to “take a chance on it.”

“The answer is usually negative, but sometimes you get a yes, and that yes drives a lot of discussion,” she said. “I don’t think you can drive tons of discussion if you’re not even willing to publish people with whom you disagree.”

James W. “Jim” An, another former editor-in-chief of the Record, said that in its early years, the newspaper frequently spearheaded live debates about current events.

“If you look at the issues from the ’50s, they were hosting straight up debates on topical political issues,” An said. “If anything, there should be more of that. I think it’s not happening as much as it was.”

An said that a key explanation for this may be that today’s students are more cautious about what they say to prevent jeopardizing their future legal careers.

“I think people are more reluctant to speak their minds on important issues because they feel that it might affect their careers, and I think that’s accurate,” An said. “Maybe I offend this partner and it reduces my chance of making partner by one percent — I think that’s the calculation people are doing in their head.”

Barlow argued the strength of the Record was its ability to allow students to write freely rather than constantly be concerned about factual accuracy, citations, and political correctness — which he believes may not facilitate “good scholarship,” but rather “good discussion.”

“That’s the failing of the Harvard Law Review, and that’s the success of the Harvard Law Record,” Barlow said. “That willingness to say overly broad statements and exaggerations for the purpose of conveying something that’s actually meaningful and discussed, whereas the Law Review context everything must be cited and everything must be footnoted.”

Bruce E. Fein, a contributor to the Record, said the publication is “unique” because it is “unreluctant to challenge” the opinions and authority of the establishment. Rather than focus on a specific, narrowly defined implementation of the law, Fein argued that the Record invites open-minded, big picture discourse concerning the purpose of the legal system.

“The Harvard Law Record attempts to at least present these views by being more oriented, saying, ‘What is the goal, why do we even have a system of law here anyway?’” he said.

In addition to asking the big questions, Fein said the Record performs a “human service” to students by presenting a counterweight to the dominant culture of the Law School.

“It presents an alternative to the old career path — you go on the Law Review, write an article, get a clerkship, and then you go back and either become president like Obama or join a big law firm and get paid a staggering amount of money,” Fein said. “It adds a diversity that you won’t get in the other kinds of publications.”

It wasn’t until Barlow overcame his concern about high academic marks that he began to take the Record seriously and became a contributor.

“I stopped really caring about getting grades in school and started having a lot of fun and that’s when I started writing for the Record and immediately dropped anything to do with writing for any journal,” Barlow said.

Barlow argued the Record helped open the Law School’s Overton window by encouraging students to be in conversation with diverse, at times polarizing, opinions of peers and faculty.

“For those who read it, especially when there began to be more controversial opinions on both sides of the aisle, it was a place where students felt free to listen to opinions that they were often afraid to voice in public and even in private,” Barlow said.

Without platforms of open discourse like the Record, Barlow said, students run the risk of entering spaces of homogeneous thought and shying away from speaking with individuals who hold disparate viewpoints.

“The inherent danger is the danger of the echo chamber,” Barlow said. “By opening up discourse on things that are outside of the accepted norms of your particular society, you can have conversations about topics without making enemies.”

“That’s the value it provides,” Barlow added. “It allows for those conversations to take place.”