With the Olympics Around the Corner, Harvard and Radcliffe Rowers Prepare to Make Their Mark

Rowing at the Tokyo Olympics will begin this Friday, July 23. 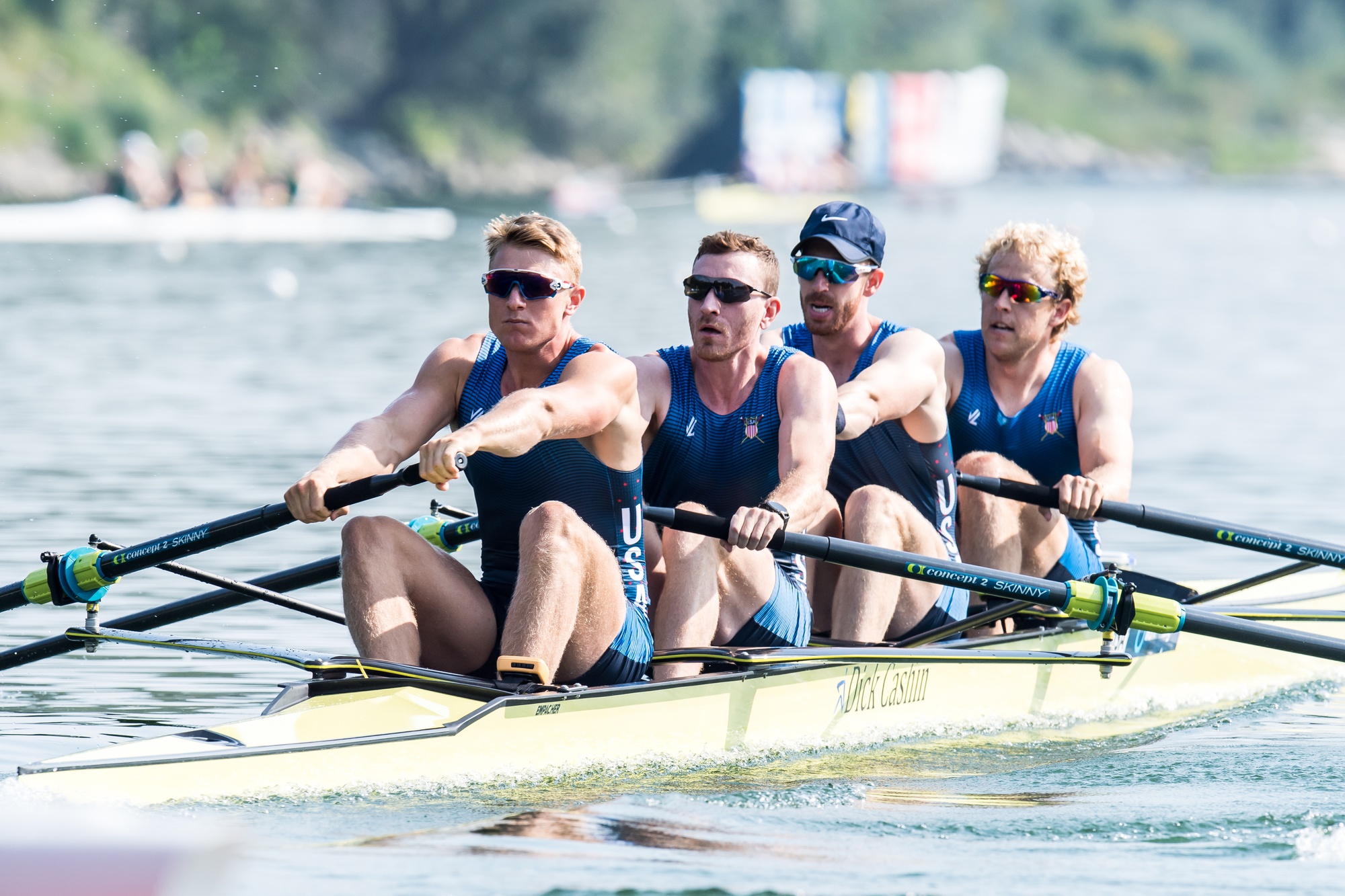 While multiple Harvard alums will be rowing in Tokyo, Dean (pictured in the foreground in the stroke position) is the only actively enrolled Crimson rower to suit up in Japan. After the uncertainty of a year's postponement, Dean and others will finally compete this week. By Courtesy of Lisa Worthy
By Alexandra N. Wilson

When the International Olympic Committee formally postponed the 2020 Olympic Games last March, Clark Dean ’23 had a couple of options: return to Harvard and attempt to balance remote classes and rowing, or take another gap year to train.

“At some point, I'm going to have to get done with school, so I might as well just bite the bullet and do a year online,” Dean said of his rationale. “Because let's say I did take another gap year, and it's like okay, well we're still not back in person or the Olympics still didn't happen.”

At the National Team Training Center in Oakland, Calif., where he has spent the bulk of the past year and a half, he was the only American rower still taking classes while training. This made for a hectic schedule throughout the pandemic, but it has finally paid off: later this week, he is headed to Tokyo to represent the US.

Dean will be competing in the men’s four alongside Harvard alum Andrew Reed ’14, as well as Michael Grady and Anders Weiss. They have all known each other for over two years but had not begun rowing in a four together until a month and a half ago; this process is fairly different than that of other competing nations, whose boat configurations begin training together about a year before the Olympics.

The American men’s four most recently won a bronze medal in 2012 and has not won gold since 1960.

“[Since 2000], the British have won every year. They have a bit of a dynasty,” Dean said. Nonetheless, the Harvard junior has hope for both the men’s four and men’s eight going into Tokyo. “This year both boats are pretty quick — It didn't seem like we had to sacrifice any speed in one boat to make the other fast… So I think both boats have a pretty good shot.”

Dean is the only enrolled Crimson rower headed to the Olympics, but not the only Harvard affiliate; alumni Andrew Reed, Alexander Richards ’18, Conor Harrity ’18, Liam Corrigan ’19, and Olivia Coffey ’11 from the Radcliffe team are competing for America. Sam Hardy ’18 and Josh Hicks ’13 are competing for Australia, and Jüri-Mikk Udam ’17 is rowing for Estonia.

Liam Corrigan ’19 will be competing not only in his first Olympics but also in his first senior-level competition as well. He will participate in the men’s eight alongside Conor Harrity and Alexander Richards.

“It’s a bit unusual to have them both at the same time, but I'm really excited for it,” Corrigan said. “That’s also because the pandemic kind of delayed everything a year.”

While the Olympic postponement was generally a setback, it presented a silver lining for Corrigan, who was younger and less experienced than his peers in Oakland.

“I was still young, so I had a lot of room to improve just by having another 12 months of experience,” Corrigan said. “I felt like it was kind of an opportunity for me.”

Olivia Coffey is the only female Harvard alum rowing in the Olympics, and the former Radcliffe standout is no stranger to high-level competition. Coffey won the World Rowing Championships in 2013, 2015, and 2018, and she won bronze in 2014 and 2019. She was a spare in Rio in 2016, and now she is competing in the women’s eight in Tokyo.

Coffey graduated from Harvard a decade ago, but she says that her age has not been a limiting factor in her training. She trains for over six hours per day nearly every day.

“It's one of those sports where you need a really big cardio base, and the only way to get that is after years and years of training,” Coffey said. “So I'm actually faster now than I've ever been just by virtue of having trained for so long.”

Coffey is participating in the women’s eight, which historically has an excellent track record at the Games and beyond; the boat won gold in the past three Olympics as well as 10 consecutive World Rowing Championships until 2016.

After nearly two decades of vigorous training, Coffey is leaning towards making Tokyo her last hurrah.

“You don't know until you finish your race, but at this point, I don't plan on coming back to training,” Coffey said. “But I'll never say never.”