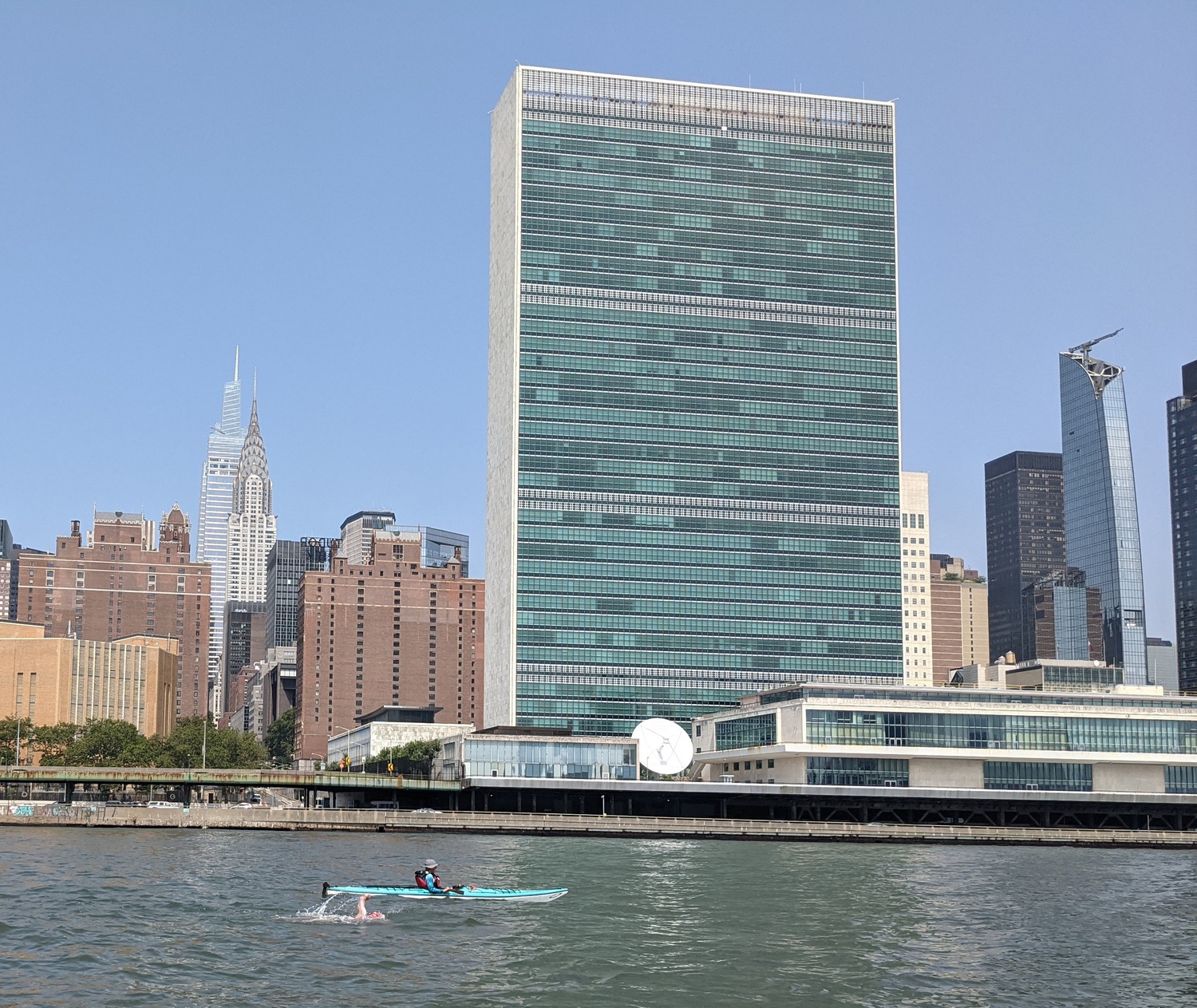 Joe Kaufman '89 powers past the Manhattan skyline, accompanied by a boat and kayak to provide cover. By Courtesy of Joe Kaufman
By Mairead B. Baker, Crimson Staff Writer

Even after four years of evading opponents in Blodgett Pool as a Harvard undergraduate, former Men’s Water Polo player Joseph H. Kaufman ’89 had never taken on a physical task as daunting as swimming the nearly 30-mile loop around Manhattan. That is until this summer, when Kaufman decided to take the plunge through the turbulent tides of the East, Harlem, and Hudson Rivers in New York City.

With stamina and perseverance, 28.5 grueling miles later, Kaufman completed the “20 Bridge Swim” around the Big Apple, reaching the finish line in eight hours and 27 minutes. In the process, the former Crimson water polo standout completed one of the world’s most famous open-water treks, alongside the English Channel crossing and the Catalina Island to Los Angeles route.

“Outdoor swimming is a wonderful experience,” Kaufman recalled. “The first two hours of the swim in the East River were probably two of the best hours I’ve ever swum.”

The swim starts at Battery Park and goes up the East River, which passes landmarks such as the South Street Seaport, the Brooklyn Bridge, and the United Nations. After passing Gracie Mansion, the home of the Mayor of New York City, swimmers turn into the Harlem River at Hell Gate before they reach the third leg of the swim, the Hudson River.

“You see the Empire State Building come into view and the UN building and you’re seeing all these amazing sights and it's just fantastic, and then you get past that and you’ve got some more challenging conditions, and it becomes a slog at times where you just have to keep your head down,” Kaufman remarked.

Kaufman first signed up for the swim around two years ago. “People from all over the world come to New York to try this. This year, I think fewer people were able to come internationally to New York to give it a try, so I got off the waiting list and had a slot in July.”

“I had been doing some swims of like two to three hours. I stepped it up a couple years ago to a longer swim up the Hudson that was 18 miles, but with the current, it took about five and a half hours. I sort of realized that this one might be doable in theory.”

To prepare for the swim, Kaufman made sure to get into the water at least three times a week but couldn’t get into open waters in New York until around May when temperatures permitted.

“Once I found out I got a spot in February, it really was a matter of trying to find pool time and just slowly build up the endurance,” he recalled.

“One of the interesting things is you don’t have to be a fast swimmer to do these, you just have to be able to swim moderately for a long amount of time without getting tired, and so it really was a different type of training than I was used to.”

With a swim team, some of the focus is placed on sprints, practicing different strokes and distances. While training for this marathon swim, however, Kaufman commented that, “a lot of the focus was swimming at a set pace and doing it for several hours without stopping and without getting your heart rate up into a zone where it's hard to sustain.”

Part of what makes training for the Manhattan Swim so difficult is its location in Northeast open waters: weather and water conditions are often unpredictable.

“In a pool, I’m usually a minute twenty, a minute twenty-five for a hundred yards, but it's different in open waters because you don’t have the walls to push off and turn, so it's slower, and then in open water, it really depends on the conditions,” Kaufman said.

“The longest training I did for this was when I was out on Long Island Sound in Connecticut over the Fourth of July weekend and just swam back and forth from these buoys for four [hours] and fifteen minutes.” 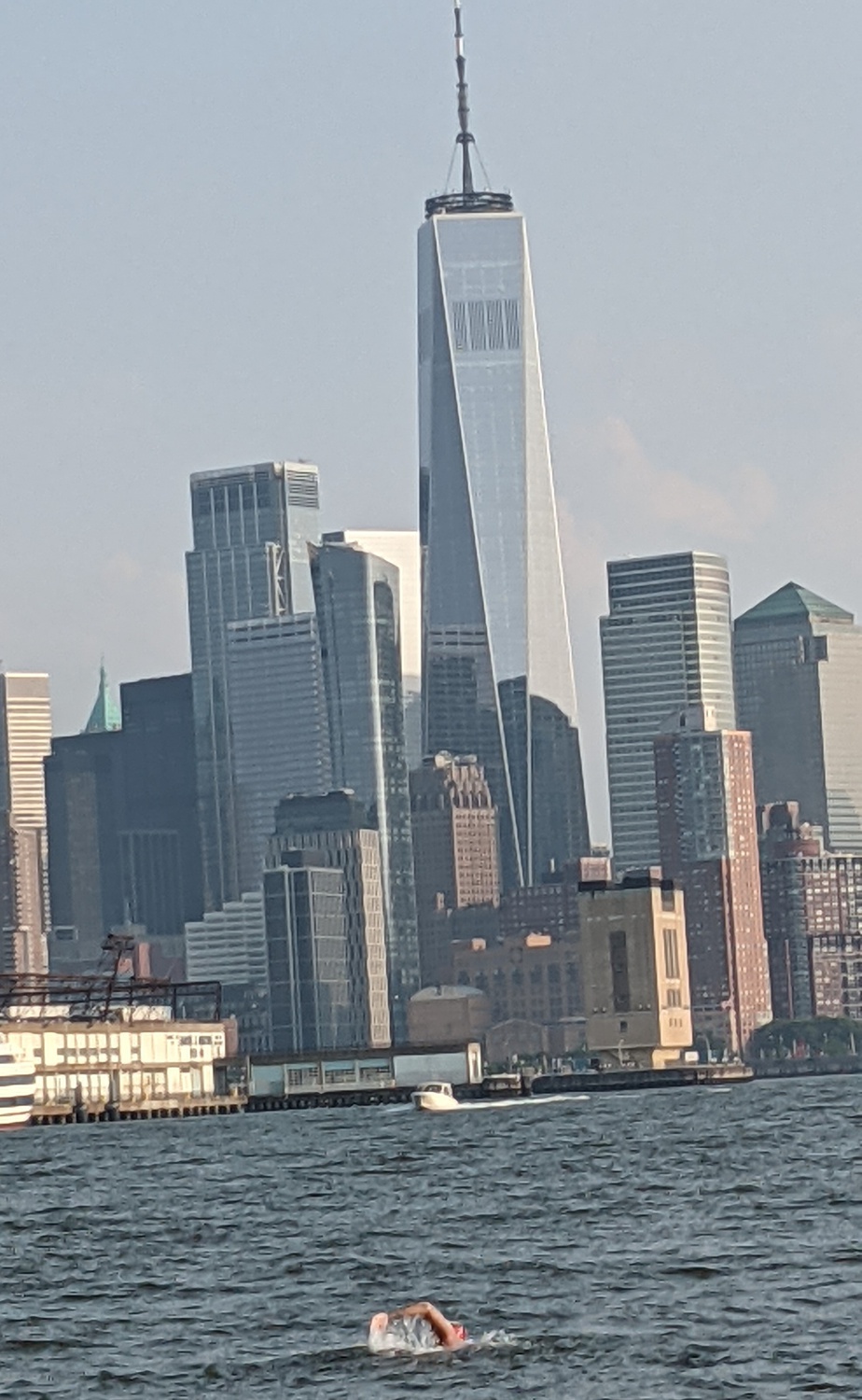 Kaufman does freestyle as the iconic Lower Manhattan skyline, highlighted by One World Trade Center, looms in the background. By Courtesy of Joe Kaufman

During the swim, Kaufman was accompanied by a kayaker and a boat who followed him the entire time. Every thirty minutes, he would stop for water and liquid nutrition.

“When I got into the Hudson, the winds picked up, so it was [bumpier]. It's a really big river, and I was right in the middle of it,” he remembered. “That was probably the most challenging part of it. It was a bit choppy, and I was swimming for so many hours.”

Kaufman reflected that advice from his sister as well as his past experience in grueling water polo matches and endurance swims gave him the extra push to finish the daunting 20 Bridges Swim.

“My sister kept reminding me to be like Dory from Nemo, you know, ‘just keep swimming.’ There are times where my back started to hurt and I felt a little tired, but I never was close to saying ‘I’m done,’ you know, having that past experience where you just have to keep going, bear down, and plow through it.”

Though Kaufman trained with teammates and friends and on his own at times, the water polo alumnus was no stranger to spending hours in the water training due to his time at Harvard.

“I think the process leading up to the swim tied mostly to my prior experience as a college athlete, which is that you have to put in the work in practice and in training, and if you put in that and you’re dedicated and keep focused, the end result pays off.”

“I came to Harvard, and I didn’t even know I would be playing water polo until the first couple days living in Stoughton. The captain of the water polo team showed up and said ‘Where are you? We’re practicing.’”

“My roommate in Eliot House was the captain of the swim team. I always felt like I wanted to give it one extra try to see what I could do,” he recalled.

Though Kaufman swam for the Crimson only for one year, he joined at an exciting time in Harvard Swimming and Diving history when swimming legend David Berkoff ’89 was breaking national records and challenging conventional swimming technique by staying underwater as long as possible.

“The first time anybody really was successful was in this Princeton meet...when [Berkoff] jumped in and broke the American record at the 100 backstroke. He wound up holding the record at the 100-meter backstroke and got the silver medal [in the Olympics], but he was so successful with his technique that they changed the rules. And now in the Olympics you actually have to come up to the surface after 15 meters; you can’t go the whole length [underwater].”

As for Kaufman, and many Harvard alumni, his Harvard roots never seem to fade. Kaufman was greeted at the finish line by an old friend at Harvard who used to play on the Women’s Water Polo team and introduced him and his wife.

As for this new aquatic challenge he has conquered, Kaufman remarked that “having challenges in life is critical, wherever you are in your life. Certainly right now, I’m in the best physical condition I’ve been in as an adult. And not having this to look at — and to a certain extent, scare me— I’m sure that wouldn’t have been the case.”

Interestingly enough, Kaufman also wrote for the sports section of The Crimson, writing the beats for both the Men’s and Women’s Swimming and Diving teams. In the winter season of 1989, Kaufman wrote this article on Berkoff when he broke both American and NCAA records in Blodgett Pool after his return from the 1988 Seoul Olympics.

— Staff writer Mairead B. Baker can be reached at mairead.baker@thecrimson.com.