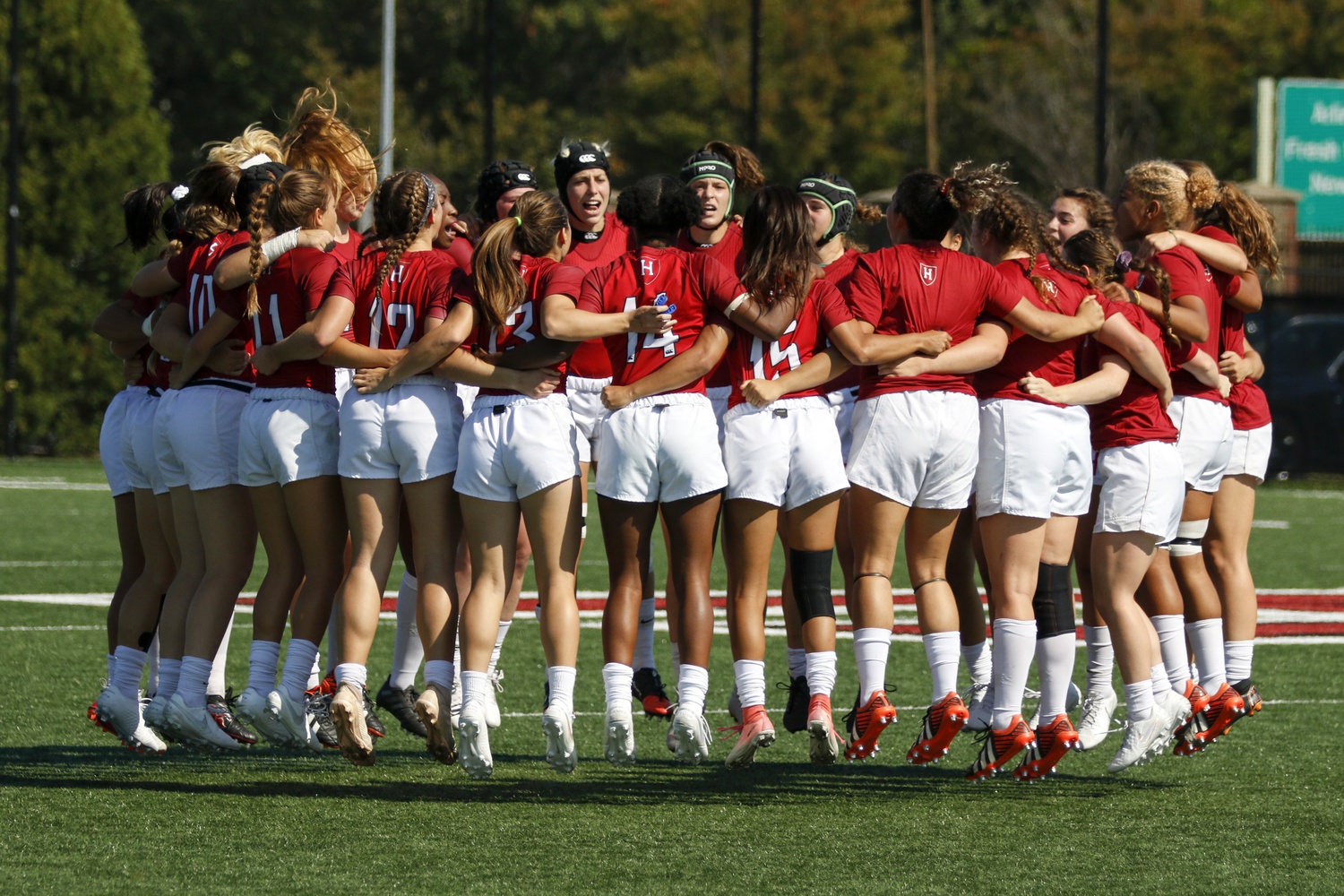 With two games now in the books, the Crimson is looking to rebuild the level of chemistry that won the 2019 squad (pictured above) a national championship. By Timothy R. O'Meara
By Lucy Connor and Elizabeth Pachus, Crimson Staff Writers

One week following its first decisive win of the season against Mount Saint Mary’s, the Harvard women’s rugby team returned to Mignone Field on Saturday to face Long Island University. The Crimson dominated the game from start to finish, resulting in a lopsided final score of 109-5.

Harvard’s players entered the game excited to play higher-level rugby and continue to gel with teammates they have never played with, or have not played with in over a year and a half.

“That was something we were talking a lot about in preseason — anticipating the challenges that come with that,” said senior winger Emma Kearney, responding to the issue of time off and many new teammates. “I think the past two games we’ve all been really getting to know each other better, learning to work together, and developing relationships off the field. I would say it’s been a lot of fun.”

Within the first 20 minutes of the match, the Crimson had already racked up points on the scoreboard to establish a 25-0 lead. Harvard remained on the offensive end of the field for much of the first half as the team continued to make big defensive stops and push the ball into LIU’s endzone. Kearney, as well as senior Cassidy Bargell, sophomore Nafanua Malietoa Fitisemanu, and first-years Chloe Headland, Kiani Akina, Jara Emtage-Cave, and PK Vincze all contributed tallies to the halftime score, 68-0.

The final result showing a triple-digit score demonstrated how effectively this team can play together, even if many players are new to the team and just seeing college-level competition for the second time. First-year wing/scrumhalf Kiani Akina tallied two tries in this match, and first-years PK Vincze (flyback/fullback), Reese Morgan (scrumhalf), and Jara Emtage-Cave (lock/center) all scored their first tries of the season. First-year fullback Chloe Headland had a standout game, with her 23 points coming from six conversions, two penalty kicks, and one try.

“It is pretty surreal to be coming in as a freshman; I’m very grateful for the coaches and the players to put that amount of trust in me to have such a big role on the team,” said Headland of joining the 2019 National Championship team. “As a kicker, I'm not doing a lot of the work, they [my teammates] do most of it. So I think it's pretty special, and I'm grateful to be able to have the opportunity to add those extra points to our scoreboard.”

Overall, 12 different Harvard players contributed to the final score. As a win of over 100 points indicates, the team did not let up its intensity of play, regardless of who was on the field.

“It was really exciting to see how deep our roster is,” Kearney said. “At the end, when we were still going strong, we had a lot of new personnel on the field, and to see us kind of maintain a standard of play that we wanted to see was really exciting.”

Headland pointed to the team’s culture as the key to its immense success so early on in the season. Given the turbulent past 18 months without live game competition, building cohesion and chemistry in the first couple of games has become a major focus.

“The team culture is so incredibly supportive,” Headland said. “They [teammates] look out for each other and they make it feel like home. The seniors have really stepped up to help the new players coming in to adjust well and feel accepted and comfortable to show what they can do.”

After a bye week next weekend, the Crimson will return to the field to take on the Sacred Heart University Pioneers on Saturday, Sept. 25.