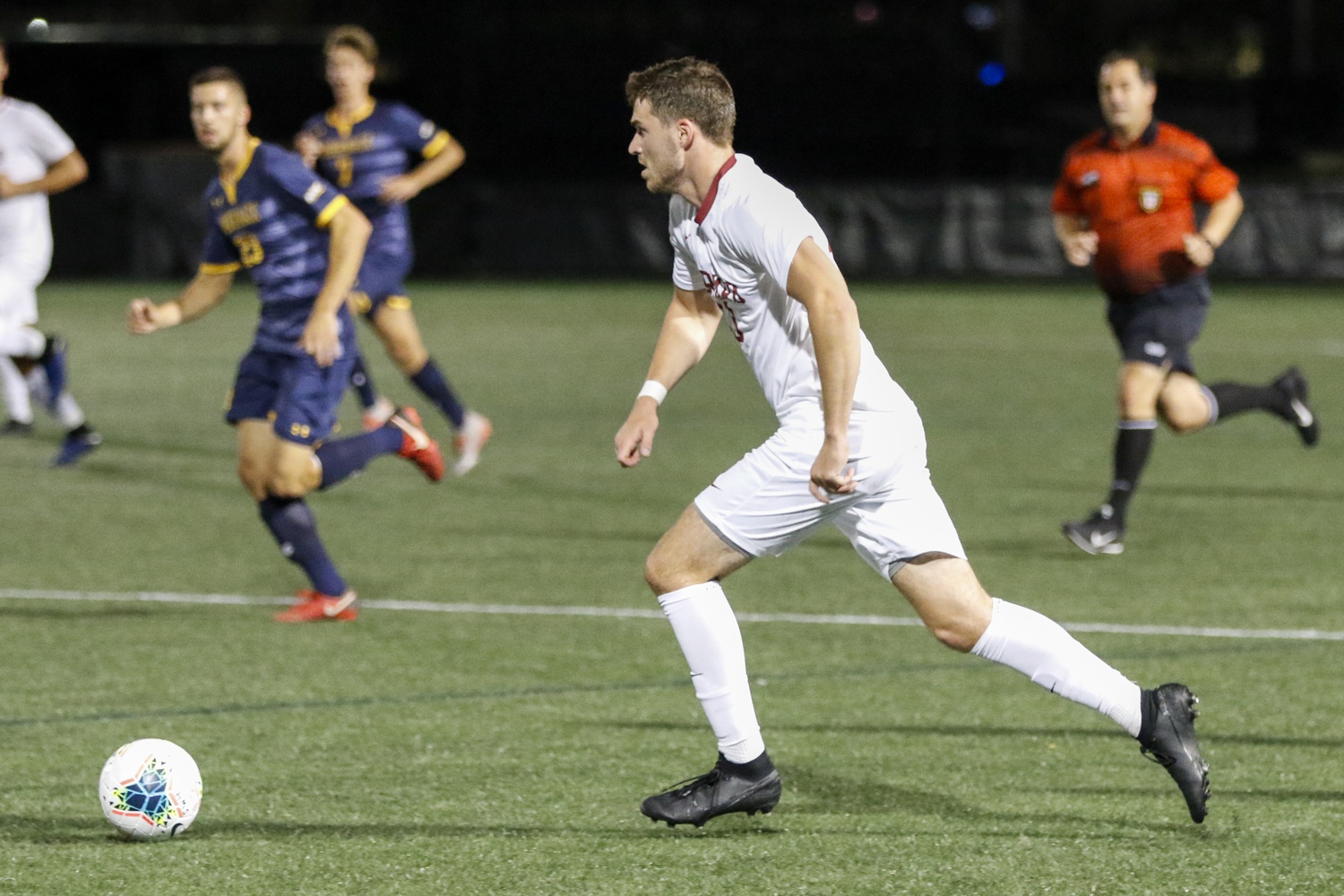 Junior forward Duncan Sutherland, pictured above in 2019, was instrumental in helping set up the Crimson's first goal in its 2-1 OT victory over the Catamounts. By Timothy R. O'Meara
By Eamon J. McLoughlin, Crimson Staff Writer

For the third time in its first six matches, Harvard played overtime after 90 minutes was not enough to find a winner. Unlike its other two games to go to overtime, the Crimson came out of this one victorious, sending Vermont home with a golden goal in the 107th minute from first-year forward Alessandro Arlotti.

Harvard (3-2-1, 0-0 Ivy) beat the Catamounts for the first time since 2008 on Friday night, as Arlotti continued his stellar form, grabbing an assist and a goal, his third of the season, all of which have been game-winners.

“It’s amazing. We deserved it,” Arlotti said of the goal. “We fought for 110 minutes and we scored. It was amazing.”

The Crimson opened the scoring early with its first chance of the game, after junior forward Duncan Sutherland and Arlotti combined skillfully down the left flank to drag the Vermont defense wide. Arlotti drifted inside after picking up the ball from Sunderland before playing in senior midfielder Cornelius Bencsik, who finished coolly across the face of goal to put Harvard up 1-0 in the sixth minute.

“I feel like every game we play, we just get better and better with the ball and off the ball,” Bencsik said of the game. “We’re starting to get confident in what we do, so I feel like that's helping us grind games out.”

The Catamounts nearly levelled the score moments later, as they hit the bar with a shot from the edge of the box after the Crimson failed to clear a cross in the eighth minute. The ball bounced down onto the goal line but was cleared, and Harvard maintained the early lead.

Although the Crimson outshot Vermont 6-2 in the first half, with five of those on target compared to zero for the Catamounts, the teams stayed close through the first 45 minutes, with both sides registering chances despite Harvard holding the majority of the ball.

Tensions flared early in the second half, with Vermont committing five fouls in the first six minutes of the half and receiving a yellow card on the fifth offense. The Catamounts finished the game with a whopping 25 fouls, compared to the Crimson’s 13.

The Catamounts levelled the match in the 62nd minute after junior goalkeeper Oskar Nilsson was unable to keep out a first-time shot from Vermont’s sophomore midfielder Jacob Vitale. Vitale poked the ball into the bottom corner after the Catamounts worked the ball down the left flank and whipped a low cross across the Harvard box. It was not immediately clear that the ball had crossed the line, but the goal was given despite the protests of Nilsson.

As the game progressed into overtime, the Crimson continued to create chances but was not able to find a breakthrough until the 107th minute. Sophomore midfielder Willem Ebbinge drove into the box and had a shot deflected, which fell to the feet of Arlotti in front of the goal. The young forward smashed the ball into the bottom of the crossbar, deflecting down and over the line, before being mobbed by the Harvard bench.

Vermont came into the game at 5-1-1, shutting out its opponents in its first five games and racking up a plus-8 goal differential through its first seven matches, and was probably the best team the Crimson has faced so far this season.

“We have 25 to 30 people who can make an impact on the game which makes the team competitive in practice,” said Bencsik of the team’s contributions off the bench. “And it gives us energy when we can use other players to step into the game and make an impact.”

Harvard heads up to New Hampshire on Tuesday at 6 p.m. for its final match before starting Ivy League play at Yale next Saturday at 7 p.m.