Men’s Soccer Hangs Tough but Falls to No. 6 New Hampshire 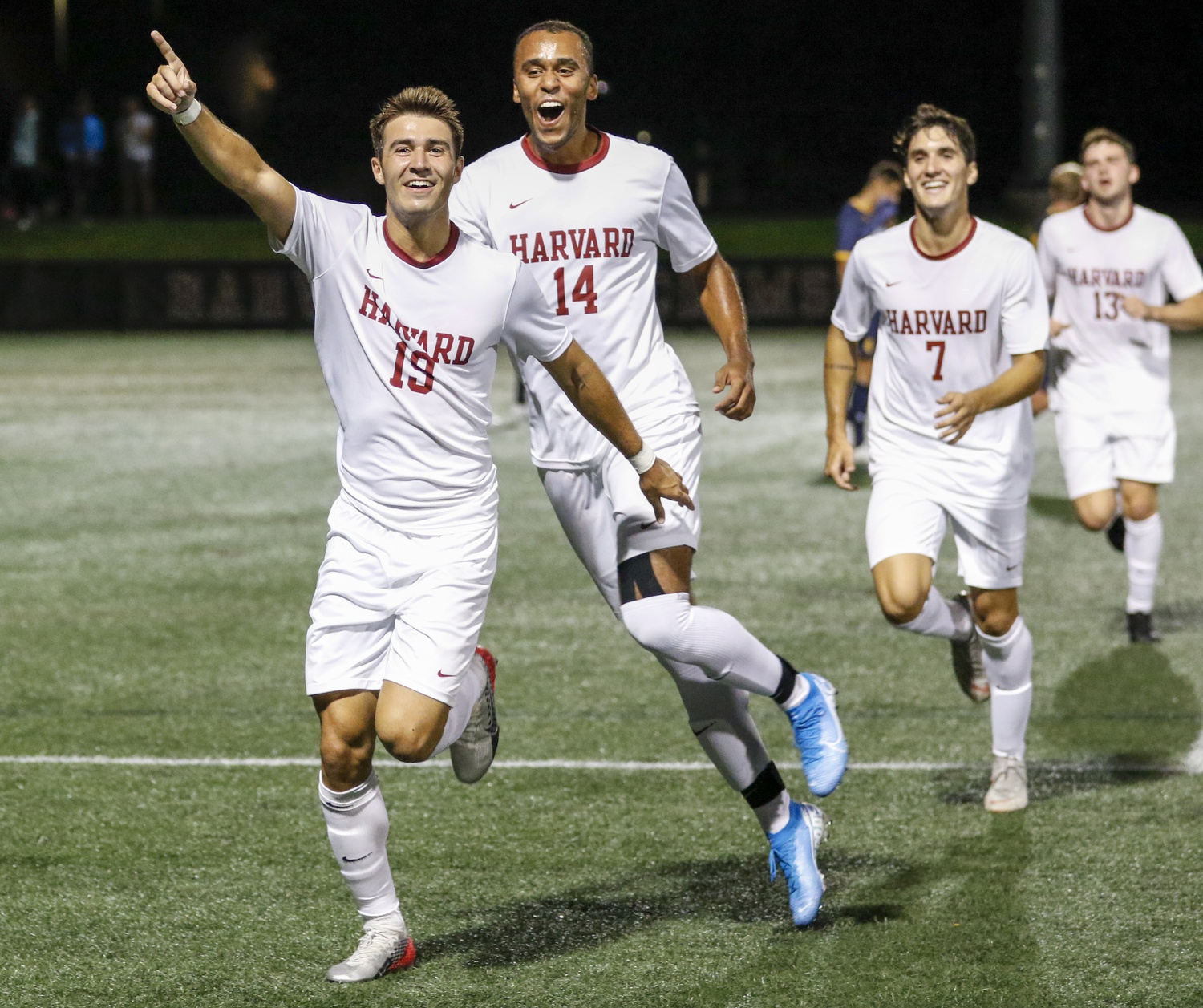 The Crimson celebrates a goal in 2019. Harvard would have reason to celebrate in the 13th minute Tuesday after knotting the game at 1-1, but New Hampshire would go on to close with two unanswered goals for a 3-1 win. By Timothy R. O'Meara
By Eamon J. McLoughlin, Crimson Staff Writer

Harvard fell by a score of 3-1 to No. 6 New Hampshire in a closely contested match on Tuesday night in Durham, N.H. In its final game before Ivy League play, the Crimson proved that it could match up with one of the best teams in the country.

Despite the game finishing with a two-goal margin, Harvard (3-3-1, 0-0 Ivy League) stayed within touching distance of No. 6 New Hampshire (10-0-0, 2-0-0 America East) all night and could have taken the game to overtime had things gone the Crimson’s way.

“Though it hurts that we lost the game, it's important that we absorb as much information as we can from that experience to improve,” said first-year defender Ludovico Rollo of the match. “UNH forced us to make mistakes in that game that we can learn to avoid in future games.”

Rollo was one of three players to feature for the full 90 minutes for the Crimson, along with fellow first-year center back Jan Riecke and junior goalkeeper Oskar Nilsson. Harvard made extensive use of its bench on the night, with 19 players appearing for the Crimson, including first-year midfielder Max Goeggel, who made his career debut.

The game got off to an eventful start, with the Wildcats pulling out ahead with a well-worked goal in only the eighth minute, showing why it is one of the best teams in the country this year. Harvard was not deterred though, as it equalized less than five minutes later in the thirteenth minute after senior midfielder Cornelius Bencsik had a shot blocked before firing in the rebound.

The goal was Bencsik’s second in his last two games, and he was again assisted by first-year forward Alessandro Arlotti, who picked up his third assist of the season. New Hampshire restored its lead soon after the equalizer, regaining its one-goal advantage in the 21st minute after the Crimson failed to clear a ball in the air and was cut open by the ensuing cross.

Harvard continued to create chances and came within inches of equalizing in the 30th minute after sophomore forward Ale Gutierrez whipped in a dangerous cross to the feet of junior forward Martin Vician, but the Bratislava, Slovakia, native could not connect cleanly, and the score remained 2-1.

“We did well to respond to their first goal by shifting the play onto their half of the field which resulted in us scoring and equalising,” first-year midfielder Marko Isakovic said. “Even after we conceded the second goal, we continued creating chances, but we just got unlucky with not scoring another goal.”

The two teams stayed close throughout the second half, with both sides creating chances, until the Wildcats were able to extend their lead to 3-1 in the 72nd minute. Nilsson came off his line to clear a bouncing long ball at the corner of the box but was beaten in the air by the New Hampshire striker who then tapped the ball into the open net to all but end the Crimson’s chances of coming back.

“We held our own against one of the highest-ranked teams in the nation on away turf,” Isakovic said of the match. “That, combined with the momentum of our wins against Merrimack and Vermont, makes me confident that we can get a positive result on Saturday.”

Harvard opens Ivy League play away at Yale this Saturday at 7 p.m., with the matchup coming almost two years to the day after their last meeting, which came on Oct. 4, 2019. The Crimson leads the all-time series 55-39-12 and will look to build on that plus-16 margin on Saturday.