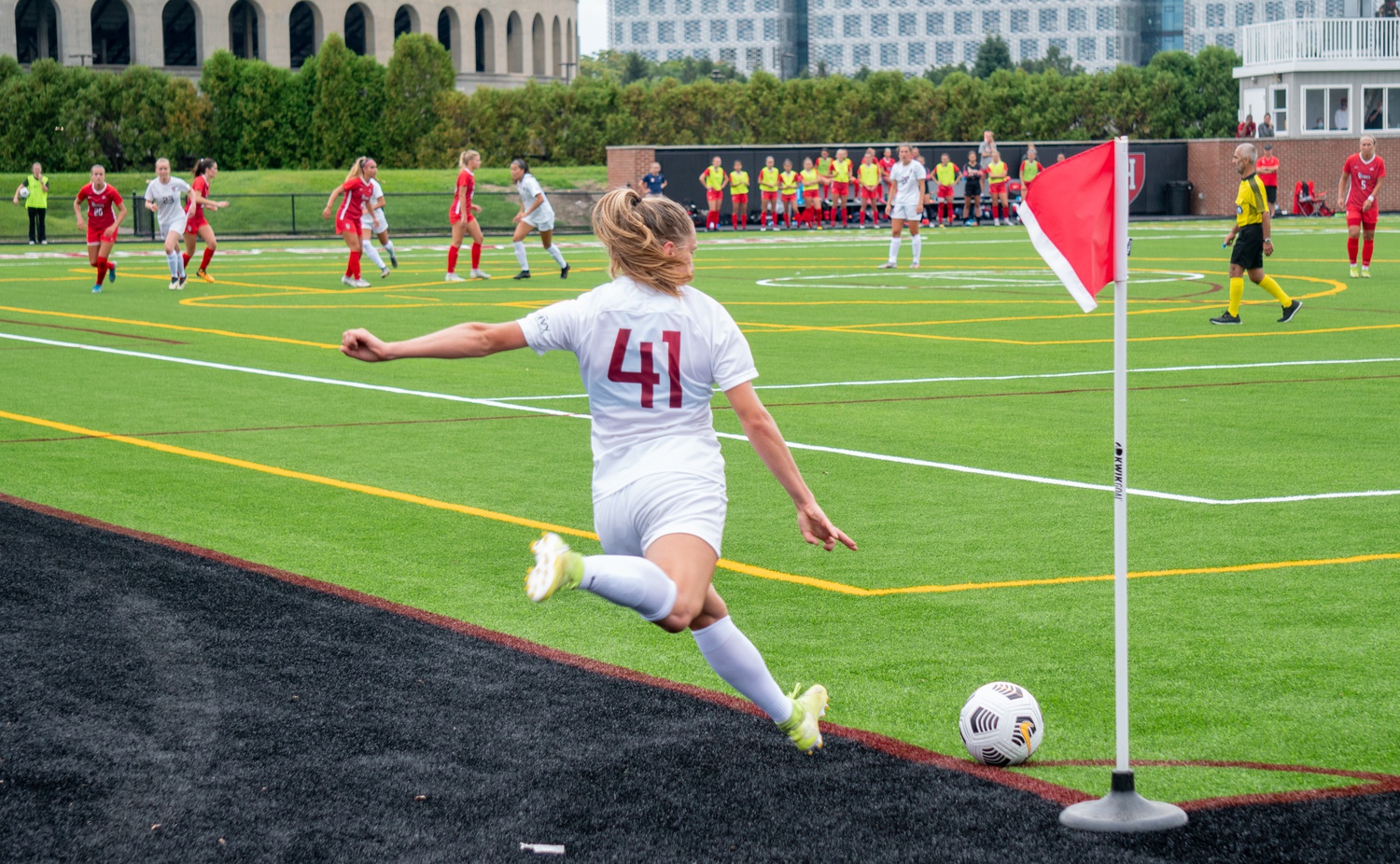 Hannah Bebar takes a corner kick in Sunday's matchup against the Red Storm. Later in the match, she would provide the golden goal that carried the Crimson to a 3-0 record. By Zing Gee
By Lev Cohen, Crimson Staff Writer

Harvard women’s soccer remained undefeated as it overcame St. John’s 3-2 in overtime at Jordan Field on Sunday afternoon thanks to a game-winning goal by first-year forward Hannah Bebar. The Crimson (3-0, 0-0 Ivy) rebounded after conceding two goals off corner kicks in the second half as it relinquished its 2-0 halftime lead.

Beyond ending the game, Bebar’s goal was noteworthy for being the Naperville, Ill., native’s first career goal. She chose a good way to celebrate her birthday, driving at the St. John’s defense from midfield, evading three tackles, and scoring from an improbable angle to the goalkeeper’s left with a perfectly weighted chip over the goalie from about 12 yards out.

“It felt great [to score my first goal],” Bebar said. “I just think it was a whole team effort. We just put it together in overtime and said we needed to outcompete them and had to want to win more than they did.”

Bebar’s goal was the second memorable Harvard finish of the game. Junior forward Angela Caloia continued her strong start to the season by kicking off the scoring in the fifth minute, as she picked up the ball in space, took a touch, and finished superbly off the crossbar from outside the 18-yard box. Caloia has now scored a goal in each of the Crimson’s three games and, beyond her scoring, provides Harvard with confidence, technical polish, and a tendency to be in the right place at the right time around the goal. Often playing with her back to goal, her ability to control the ball and find teammates under pressure helped spur some of the Crimson’s best chances to score from open play, most of which came in the first half.

Sophomore defender Taylor Fasnacht added her first career college goal later in the first half, just seconds after she entered the game. After an intelligent run from right midfield, Fasnacht found herself open in front of the goal. She needed only to deflect the ball past the Red Storm goalkeeper after an incisive cross by first-year defender Hildur Hakonardottir put her through on goal.

The eye-catching performances by many of Harvard’s underclassmen came after head coach Chris Hamblin once again opted to field an inexperienced starting lineup. Six of the 11 Crimson starters were first-years.

“We’re still trying out a bunch of different rotations and trying to see what works,” Hamblin said. “We don’t have all the answers right now, but we’re trying to figure out what that looks like. So we’re going to continue to experiment throughout the time period.”

The starters drove Harvard to a flying start, with Caloia’s goal punctuating a number of dangerous attacks in the first 10 minutes. The Crimson not only posted a 2-0 halftime lead but also controlled play in the first stanza. Harvard outshot the Red Storm 10-2 and smothered any brief promising St. John’s attacks with a ferocious press that usually won the ball back after two or three passes.

“I think our front line is so skilled … it’s meshing really well,” said Bebar, one of the six underclassmen who started on Sunday. “We are still building that chemistry, but I love playing with them and can’t wait for the rest of the season.”

But while Harvard’s technical superiority was evident throughout the first half, the Crimson’s inexperience showed through in the second half. Both St. John’s goals came directly from corner kicks, and the Red Storm had a few other chances to score more in the second period, usually off of set pieces or a mistake from Harvard’s defense.

“Coming in late as an Ivy League program, we don’t get to play scrimmages against high-level competition,” Hamblin said. “We hadn’t really faced a lot of corner kicks yet. I think we’ve only had one corner kick against us until today. And so it was obviously an area that we are going to go back and look at and say how can we fix it, because they obviously managed to get us with two corner kicks.”

While the Crimson ended up outshooting its opponents 18-9 and controlling most of the game, the two set-piece goals and St. John’s second-half fight ensured that overtime and Bebar’s spectacular solo effort were needed to separate the two teams.

“It was a cliche game of two halves,” Hamblin said. “The first half we did pretty well, and we were able to move the ball, create a lot of chances, and were unlucky not to score a few more goals. And then in the second half, they came out and they pressed us really, really hard, and they worked to their game plan and put us on our heels. And we kind of bent but didn’t break.”

Harvard will be back in action at Jordan Field on Thursday as it has a date with Boston College (5-1, 0-0 ACC). The Eagles should mark another step up in competition for the Crimson as Harvard continues to prepare for the start of the Ivy League season on Sept. 25.