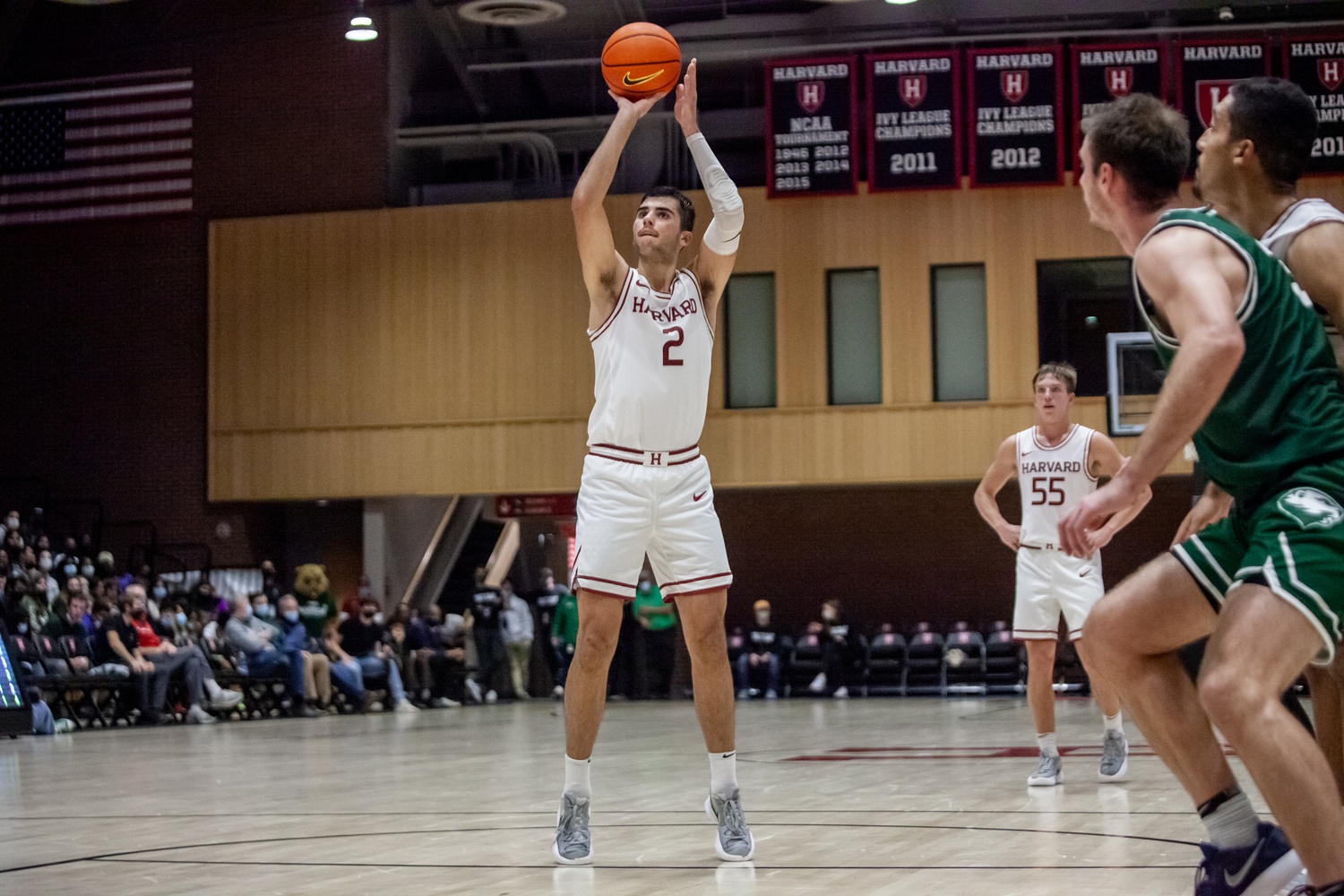 On March 7, 2020, following a dominant victory against Yale, the Crimson were looking forward to the Ivy League tournament and the possibility of securing a conference title on their home court. Little did anyone know, that would be the last Ivy League game Harvard would play for over twenty months. Following a two-year hiatus, the Crimson have finally had the chance to compete against its Ancient Eight foes.

After a strong start to the season against non-conference opponents, Harvard men’s basketball (10-6, 2-2 Ivy) has had a bumpy road to start its Ivy League schedule. Close wins against Columbia and Dartmouth were bookended by losses against Brown and Cornell, the latter of which saw the Crimson get outscored by twenty points in the second half.

Harvard’s struggles can, in part, be attributed to its dearth of big men in the lineup. Senior forward Mason Forbes and sophomore forward Justice Ajogbor have yet to step on the court, leading to small-ball rotations that can be outmatched on the boards. This lack of rebounding was most apparent against the Big Red. Cornell outrebounded the Crimson 39-20, an immense margin that was responsible for the Big Red’s strong second-half performance.

“[The injuries] have been tough, especially when we had so much time off and were envisioning our senior year going differently,” senior captain Kale Catching admitted. “It hasn’t gone exactly according to plan and that part of it is definitely frustrating.”

Along with their struggles on the glass, Harvard has also had a difficult time defending the perimeter. Against its conference opponents this season, the team allowed a staggering 45 percent shooting from three.

“A lot of [the opponents’ three-point success] is a result of our poor transition defense,” Coach Amaker said. “We're on our heels on most possessions and teams are pushing it up and get into a rhythm. They are running their offense and getting a lot of open looks in transition.”

Despite the Crimson’s misfortune with the injury bug this season and their lackluster perimeter defense, the team remains optimistic throughout its early conference schedule.

“There's definitely been a change in perspective and hopefully, little less ‘woe is me’ attitude,” Catchings said. “We are accepting the current situation as reality and I think our guys have wrapped their heads around it. It also makes us out to be a better story and it's a great opportunity for us.”

There have been bright spots from Harvard’s performances against Ancient Eight that are hopefully a sign of things to come. One of the team’s most impressive players has been senior forward Noah Kirkwood. Against the Ivy League this year, the Ottawa, Ont., native has averaged 22.5 points, 5.8 rebounds, and 4.5 assists per game. He also has an Ivy League Player of the Week distinction to his name, after the Crimson defeated the Lions and Big Green on the road.

“He's one of the top players in our league, and I think he's one of the better playmakers in the country,” said Coach Amaker. His performance has been along the lines of other guys we've had in the past such as Jeremy Lin and Wesley Saunders. Noah is in that category as a playmaker.”

Kirkwood’s stellar play has come in spite of the instability of Harvard’s lineups. He is able to fill in for multiple positions and come through for the Crimson when they need it most.

“It's very easy to play with him and it’s very impressive the way he's been able to where he’s really not even playing his own position,” Catchings said. “He's made it a lot easier for me and can create his own shot while also creating shots for others. I think he's done a great job, especially in recent games, as he’s had to call his own number more.”

Alongside Kirkwood, the team’s underclassmen have also had to step up in light of the injuries facing the team. The Crimson have a strong core of young talent that has played above expectations during their first conference games.

“I give [the young players] so much credit,” said Coach Amaker. “They have been hard workers, they've earned the respect in this program to be out there to play and earn the minutes and nothing has been given to them. That's a tremendous sign for these guys.”

Tomorrow, Harvard is facing one of its bitter Ancient Eight rivals at Lavietes Pavilion at 5pm. They will go up against Penn, a team they have clashed with in each of the last two Ivy League tournaments. The Quakers (7-12, 4-2 Ivy) are coming off an impressive win against the Yale Bulldogs and are looking to strengthen their conference record. Sitting at .500 in Ivy League play, this game will be critical to the Crimson’s chances of making it to the Ivy League tournament this season.

“It's definitely not panic time,” said Catchings. “We're early in the season. But it's definitely time to really have a sense of urgency and kind of bring that competitive edge about us”.