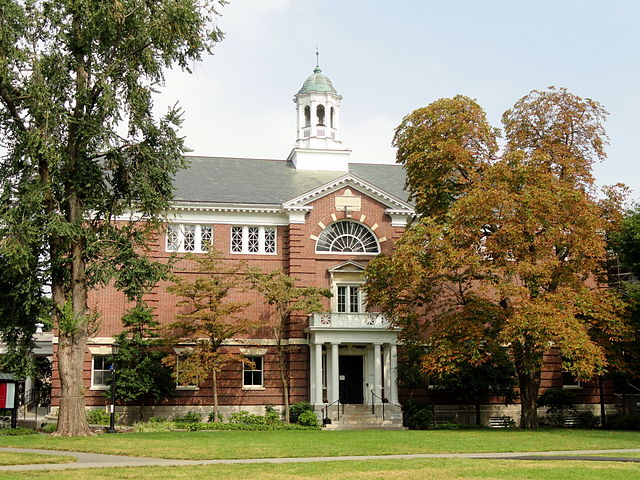 Tsitsi Dangarembga serves as a Joy Foundation Fellow at the Radcliffe Institute of Advanced Study. By Courtesy of Daderot / Wikimedia Commons
By Joyce E. Kim and Rysa Tahilramani, Contributing Writers

The presentation, titled “Migration: The Path of the People,” included stories of civil rights violations in Zimbabwe, in which state officials arrested and tortured political opponents to silence dissent. Dangarembga —a novelist, playwright, and filmmaker — argued that these issues were modern consequences of the history of colonialism in Southern Africa.

Danarembga kicked off her talk by asking who the perpetrators of the current atrocities in Zimbabwe are.

“What kind of people perpetrate such atrocities? Where did they come from and what are their etiology? Why do they behave the way they do?” Danarembga asked.

Danarembga described the origins of the Zimbabweans as beginning in 7500 B.C., when West African people were believed to have migrated to Southern Africa. There, they established wealthy, strong states that engaged in trade and coexisted with surrounding societies.

Their encounters with the Portuguese, Dutch, and British, as well as other Europeans, resulted in frontier wars over territory and trade, she said.

Dangarembga highlighted the Seventh Frontier War, a conflict between the Xhosa Kingdom and the British Empire, as particularly significant in the migrants’ history.

“It is significant because it was the first time that Xhosa women — the migrant people who had settled in the Western Cape — tortured, captured British soldiers, even unto death,” she said. “My interpretation is that this shows a change in the ethical nature of the migrants, as well as physical migration.”

In the first half of the 19th century, the migrants were forced to travel back to West Africa by the British, she said.

Dangarembga described the migrations as “aggressive” and “bloodthirsty” and involved the unprecedented use of weapons.

“In my opinion, this strengthens my hypothesis that something fundamental had changed in the nature of the migrants over the course of the centuries and millennia,” she said.

Dangarembga cited Ubuntu, a philosophy of life that existed prior to European colonization of Southern Africa, as a commonality among many African cultures. Ubuntu defines individual identities through “socially acceptable ways they can interact” with one another.

Dangarembga said this way of life was disrupted by European colonization, resulting in a lasting legacy of social unrest.

“My hunch that I will investigate while I am here is that colonization disrupted these bonds without providing an alternative structure of psychosocial bonding, in which human desires could be satisfied positively in Zimbabwe,” Dangarembga said. “This led to the armed struggle of 1966 to 1979 and the atrocities that have been endemic in the society ever since.”

When asked about the presence of Ubuntu in current Zimbabwean society, Dangarembga said she believes it remains a potential solution to the atrocities.

“I think Ubuntu as a practice has been lost. I think Ubuntu as an idea, as a possibility, as potential, is still with us,” she said. “I think it can form these other paradigms that many philosophers are proposing and debating into something that can be useful.”

Days before the virtual event, Dangarembga filed an appeal against her conviction and sentence in Zimbabwe for protesting.

As a Radcliffe Institute Joy Foundation Fellow, Dangarembga plans to continue exploring the evolution of the Zimbabwean people.

“My project is to contribute to unraveling how the migrants who over millennia expanded, for the most part, peacefully from West Africa turn into the sort of people who normalize the kinds of acts that I related in the beginning,” she said.