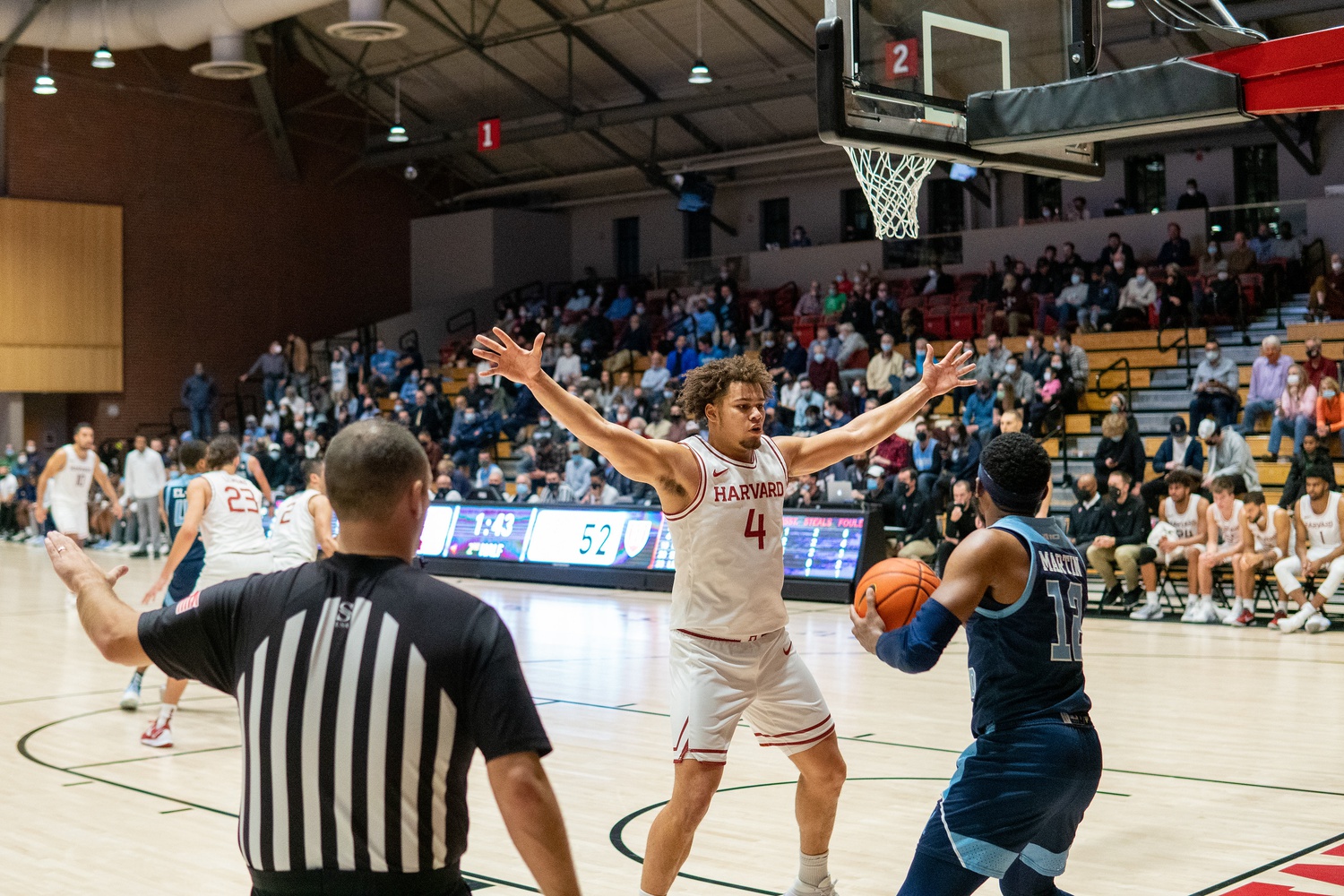 With four seconds left on the clock, freshman guard Jared Turner rebounded the ball and slung a pass upcourt to junior forward Coleman Stucke, giving him the opportunity to overturn a one-point deficit and grab a 71-70 win for Northeastern. As the clock hit zero and the buzzer lit up, Coleman’s shot came off the backboard, hit the rim and fell harmlessly wide, sending fans in the Matthews Arena into silence and settling a tight contest in favor of the Crimson.

In a hard-fought victory, Harvard (3-1) overcame a 63-57 deficit in the last five minutes of the game to win 70-69. With 1:42 left on the clock, junior guard Sam Silverstein capped off a 16-6 Crimson run with an emphatic dunk to put Harvard into the lead. The Crimson was able to successfully shut-out Northeastern (0-3) for the remainder of the game.

Wednesday night’s win for Harvard marks a third win in four games to start off the 2022-23 season as the team aims for a return to the Ivy-League playoffs and a potential NCAA tournament bid.

“We knew this would be a tough game, we knew it would come down to the wire," senior forward Chris Ledlum said. “I’m just glad we stuck together, played the game together, and came out with a win.”

After being forced to sit out the second-half of last season with an injury, Ledlum is wasting no time. Ledlum recorded a career-high 29 points against the Huskies, shooting 12-17 from the field and 3-5 from 3-point range.

“Chris Ledlum was sensational, he carried us and put us on his back,” coach Tommy Amaker said.

Last season, injuries proved to be a persistent pain for the Crimson with Ledlum, sophomore guard Louis Lesmond, and senior guard Idan Tretout all spending significant time on the sidelines. This year all three players are back to fitness and have been a big boost for Harvard on the court.

“It was a long journey,” Ledlum reflected. “I’m just glad my teammates believed in me, they helped me. We all did it together. So we’ve just been building, working hard in practice, and I’m just looking forward to continuing to win games.”

The depth of the Crimson proved to be critical in its eventual victory.

“We talked about it at halftime that we thought the difference in the game was going to be our bench and our balance,” Amaker said.

When asked about the impact of having injured players back, coach Amaker expressed his satisfaction.

Another positive for the Crimson was the performance of first-year forward Chisom Okpara who led Harvard in rebounds with 10 on the night. Okpara has been featured in all four games this season, with this game marking his first game of double-digit rebounds.

“Sometimes we need him to slow down, but I like the fact that that’s how we’re trying to coach him, not “we need you to play harder” – that’s a really good thing,” Amaker said. “He brings about a great spirit and energy, and he’s gonna do exceptionally well here at Harvard on and off the court.”

The Crimson started the game strongly, surging out to an early 13-6 lead off of a pair of Ledlum three pointers and two two-point jump shots from junior forward Justice Ajogbor. Cheered on by the home crowd, Northeastern found a rhythm and went on a 8-0 run to swing the momentum in their favor and bring the score back level at 17-17. The rest of the first-half followed a back-and-forth rythm with Northeastern briefly pulling into a 32-24 lead off back-to-back three pointers from Stucke, only to have its lead reduced to 32-30 by two unanswered Harvard two-pointers and a momentous dunk by Ledlum off a turnover to end the half.

Both teams started the second half energetically in an attempt to gain control of the game. Ledlum continued right where he left off, faking a shot from the corner, and breaking inside for a two-hand slam to tie the game at 32-32. Northeastern would not be discouraged and responded immediately with a dunk of its own from junior forward Alexander Nwagha, setting the tone for a tense second half.

As the clock ran down, the two teams exchanged blows, both staying within striking distance of a win. With 2:14 left, Ledlum made one of his few mistakes of the game, missing two-free throws after being fouled on an attempted layup. The next play led to a two-point jump shot from junior guard Jahmyl Telfort, putting Northeastern into a 69-68 lead and causing the home crowd to erupt with cheers. The joy, however, was short lived with Silverstein slamming home the dunk that would prove to be decisive just twelve seconds later.

The enthusiastic celebration from the Crimson bench at full-time showed the spirit of a team hungry for success. Despite being early in the season, the win for the Crimson feels significant in setting the tone for games to come.

“I was really happy for our kids because, in terms of how your year can go, it can depend on some of these tough, hard-fought, close games in particular on the road,” Amaker said.

The Crimson will now bring the action back to its home court with play resuming at Lavietes Pavilion against Siena College this Sunday.