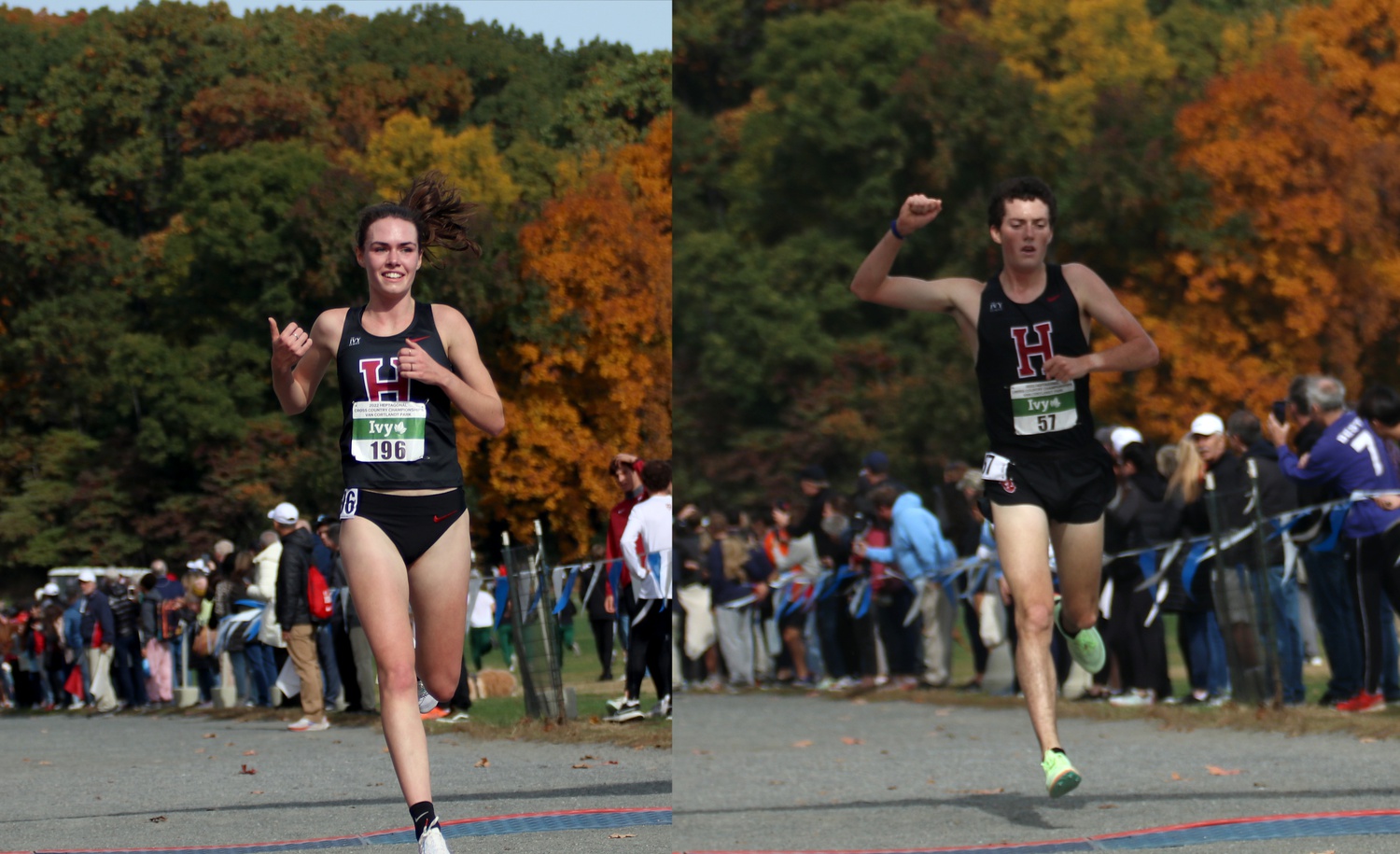 The Harvard men’s and women’s cross country teams raced at the NCAA Northeast Regional Cross Country Championships on Friday, November 11 at Van Cortlandt Park in the Bronx. The men’s team surged to a second place, earning a team NCAA Championship Automatic bid behind electrifying efforts from juniors Graham Blanks and Acer Iverson. On the women’s side, the Crimson competed to keep their season alive, but finished fourth, falling just short of an NCAA Championship meet bid, led by another dominant victory from junior Maia Ramsden individually.

This marks the third consecutive season where the Harvard men’s team has achieved an NCAA Championship meet berth.

At the front for the Crimson were Blanks and Iverson, who played a crucial role in the team’s second place finish, placing first and second overall, clocking in at times of 29:14.1 and 29:19.7 in the 10K, respectively.

“When you can start off your scoring with three points through your first two runners, it’s a really great spot to be in as a team,” Coach Jason Sparksy said.

Coming off of a 1-2 finish at the Ivy League Heptagonal Championships on October 28th, Blanks and Iverson became the first pair in program history to finish first and second in an NCAA regional cross country meet, punctuating the dominance of this pair up to this point in the season. Being training partners plays an advantage in helping both runners execute during races.

“When we're racing in a pack together, we're always trying to find each other,” Iverson said. “And that brings a lot of confidence coming with it because we've been working out together for three years now. And so you know, we know if Graham's with me, I deserve to be here. My fitness means I should be here. Graham feels the same way when he is sitting up there with me.”

The next Harvard scorer was senior David Melville, finishing fifteenth overall in 29:49.8. Rounding out the final two scoring positions, first-year Shane Brosnan and sophomore Joe Ewing finished in 29th and 42nd with times of 30:14.4 and 30:34.3. First-year Vivien Henz also competed for the Crimson, finishing in 32:03.8

“A lot of the credit goes to coach Gibby, and the way that he prepares the team for the 10K distance as the training is really geared towards that endurance side of things,” Sparksy said.

Harvard typically tends to adopt higher mileage training plans throughout their seasons, waiting until the postseason to taper and drop its weekly mileage, which, for its top runners, ranges in the high 90s to low 100s in the height of training cycles. This often leads to the Crimson having lower rankings during the weekly NCAA coaches poll during the regular season, but often matching or surpassing their pre-season rankings come championship season.

Blanks epitomizes this trend, as he did in the 2021 season, and now this year, showing significant improvement in placing after the shift from 8K to 10K.

“I think the 10K is a little more suited for me just because the 8K is a weird distance. It’s farther than you go in high school for cross country and a little shorter than you do in the championships season in the NCAA, which is a 10K,” said Blanks. “It forces you to sit back and relax throughout the race just because of how long it is”.

Blanks looks to improve on his 23rd place finish at the 2021 NCAA Championship meet this time around.

On the women’s side in the 6K, the Crimson fought to extend their season to the NCAA Championship for a second consecutive year, but came up short. The team placed fourth, finishing behind Syracuse, Providence, and Ivy League rival Columbia.

“I was really proud of the way the women's team executed. They got out and got in a good position,” Sparksy said. “They were in a good spot in early parts of the race, but gotta give credit to both Syracuse and Providence. We just came up a little bit short.”

Maia Ramsden blazed past the field, capturing the win by a margin of five seconds in 20:20.6. That performance punched Ramsden an individual ticket to Oklahoma for the NCAA Championships. This will be her second year competing at the meet, and her first as an individual.

“It was great to see Maya Rayle have such a strong finish to what has been an outstanding individual cross country season for her,” Sparsky said.

Sophomores Isabelle Goldstein, who finished 31st in 21:15.6, and Ella Gilson, who finished 33rd in 21:16.3, filled the third and fourth scoring slots for the Crimson, while first-year Penelope Salmon was the fifth and final scorer, coming in 45th in 21:29.7.

Now, all eyes turn towards the NCAA Championship meet in Stillwater Oklahoma on Saturday, November 19th. Amid all the buzz and excitement surrounding the race, Harvard plans to lock and execute when the day arrives.

“[Our student athletes] do a great job blocking out the noise, not paying much attention to the polls and the ranking,” Sparsky said. “They all know it's about doing it on the day and are fired up and excited to have a great day out in Oklahoma.”