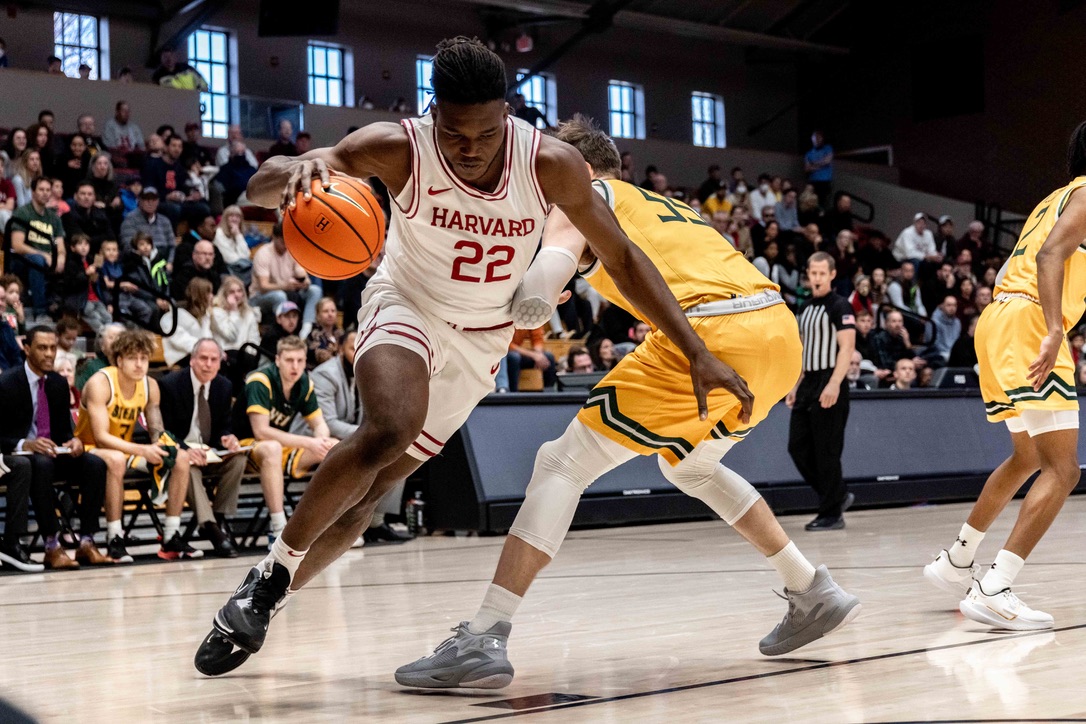 After fighting back from a 13-point second half deficit, Harvard entered the final two minutes of Sunday night’s game against Fordham trailing by just two points. The Crimson, hoping to complete an impressive comeback and take the lead for the first time since midway through the first-half, was ultimately disappointed as the Rams made two quick two-point jump shots and 6 consecutive free throws to secure a 68-60 victory.

The defeat against Fordham (6-1), played out in the oldest operational NCAA Division I basketball arena Rose Hill Gym, marked the second loss of the year for Harvard (5-2) and the end of a four-game winning streak.

The Crimson started with intent, putting its first four points on the board through junior forward Justice Ajogbor, who utilized his physicality to back up his defender before pivoting to release a smooth two-point hook shot. Ajogbor went on to sink 100% of his four-free throw attempts and knock down another two-pointer to record a career high eight points in the game, all in the first half.

After losing both of his biological parents at a young age, Ajogbor’s journey to the Ivy League is one of grit and determination. This year marks Ajogbor’s first full season for Harvard after missing out on the majority of his sophomore season through injury and the 2020-21 season because of the Covid pandemic.

When asked about Ajogbor earlier in the season, head coach Tommy Amaker offered his praise of Ajogbor not just on the court, but off it as well.

“I’m really proud to see him blossoming and studying here at Harvard,” Amaker said. “I think he knew from a young age that maybe this was something that his biological mom wanted for him before she lost her life, so when you hear things like that and you talk about opportunities you talk about purpose, that’s Justice Ajogbor.”

In a tight first half, Harvard traded points with the Rams, eventually bringing the score level at 24-24 with 1:53 left in period through junior co-captain Sam Silverstein’s second three point field-goal of the afternoon. Silverstein went on to lead the team in points with a career-high of 17, shooting 6-14 field-goals in addition to five rebounds and three assists.

The last two-minutes of the first half proved difficult for the Crimson, as an inspired Fordham offense went on a 7-0 run, giving the hosts a 31-24 advantage heading into halftime.

Harvard came back onto the court in the second half with intensity but was unable to break the Ram’s momentum, slipping into a 13-point deficit at 46-33 after five minutes of play.

With nine minutes on the clock, the Crimson turned up the heat, going on a 12-3 run to come within two-points of taking the lead. With a 54-52 scoreline and five minutes to go, Fordham was able to respond, but not decisively. Harvard continued to cut this deficit to a mere two points twice more in the next three minutes, setting up the game for a grandstand finish at 58-56 with 1:52 left to play.

Much to the Crimson’s frustration, the Rams used a run of stiff defense and offensive efficiency, led by perfect 6-6 free throw shooting to suppress Harvard and walk away with a deceivingly comfortable eight-point margin.

The Crimson continues its roadtrip against instate rivals Holy Cross on Wednesday night before returning home for a sold-out showdown with UMass on Friday.

—Staff writer Alex Bell can be reached at alexbell@college.harvard.edu.