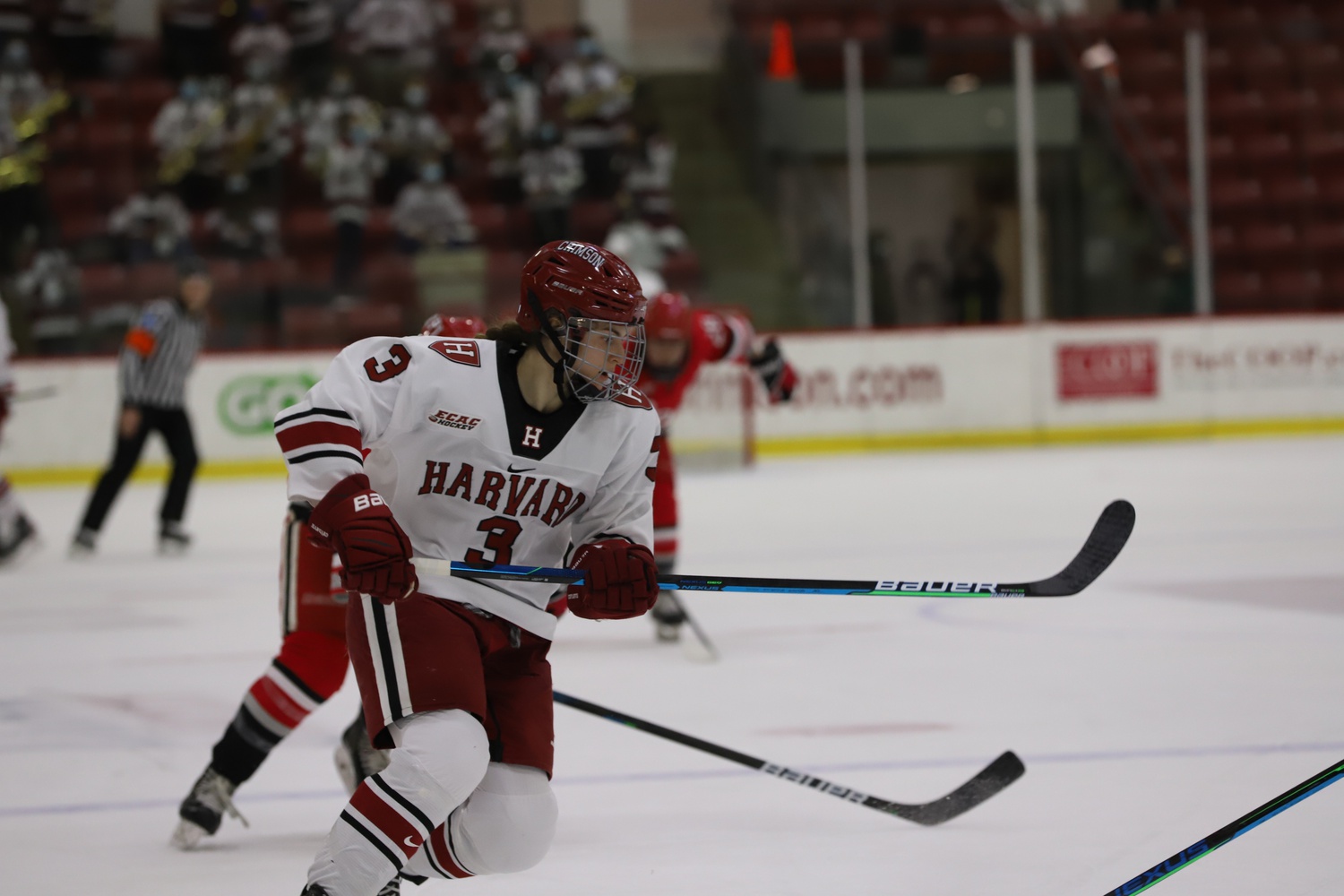 By The Crimson Staff
By Shahmir Aziz

The Crimson came into the final few weeks of the regular season in red-hot form, having recently been crowned Ivy League and Beanpot champions. They finished their last homestand of the regular season with three home games last weekend, against Princeton, No. 9/9 Quinnipiac, and St. Lawrence.

With the top spot in the ECAC rankings up for grabs as Harvard and Yale fight for first—with Quinnipiac not far behind—the Crimson entered this homestand knowing these games would be crucial in determining the final regular season standings.

No. 7/6 Harvard (19-7-1, 14-5-1 ECAC) opened the series of games with a 2-0 victory over Princeton on Friday, in its final Ivy League contest of the regular season. It was a surprise to none that the Crimson’s season standout and top point scorer, senior forward Becca Gilmore, was the first to strike, scoring a goal with 15:53 left in the second period. The goal brought her season tally to a whopping 16 goals, after which senior forward Brooke Jovanovich strengthened the Crimson’s lead with another goal at the very start of the third. Junior forward Anne Bloomer’s assist also saw her join Gilmore and junior forward Kristin Della Rovere in having 30+ points in the season, a feat that a trio of Crimson players have not managed to do season since the 2014-2015 season.

Saturday saw Harvard take on No. 9/9 Quinnipiac next, which ended with the Bobcats completing a comeback to edge the Crimson 2-1 despite Harvard’s early lead. Once again, it was Gilmore who managed to put Harvard ahead just 4:41 into the first period. However, after this early goal, the Crimson faltered, struggling to put together an effective offensive attack in the second and third. Quinnipiac maintained their one-goal lead until the final horn blew, as even pulling the goaltender for an extra attacker in the last two minutes couldn’t help the Crimson tie the score.

Despite the close loss to a big opponent, the atmosphere at Bright-Landry was not all that bad, as Harvard honored its nine seniors of the Class of 2022 with a postgame Senior Day ceremony.

“It was great! It’s always great to have all the senior families there, to celebrate this four-year, really five-year [including the year off due to the pandemic] journey with us,” said Gilmore. “The parents are a huge part of this program and the support we get, so it was great to get to share that moment with them.”

Finally, on Monday, in its last home game of the season, Harvard clashed with St. Lawrence in what turned out to be a very high-scoring, tumultuous game that eventually ended in a 3-3 tie, despite the Crimson managing to shoot 30 more times than their opponents. Bloomer scored her 19th goal of the season (the highest on the team), with Gilmore assisting on all three goals, bringing her points season tally up to 42—the highest for any Harvard player in the last nine years.

“Point production is just a mirror of the team’s success, and I think our team has had quite a lot of that, after a few years now. I also have to [attribute] a lot of this to my linemates, Della Rovere and Bloomer—they’ve been absolutely phenomenal. We’ve really been clicking this season, and we make each other look really good,” said Gilmore when asked about this amazing achievement.

This weekend’s results saw the Crimson maintain its second position in the ECAC rankings, two points behind the Bulldogs with two games yet to be played. These two away games, against Rensselaer Polytechnic Institute and Union College on Friday and Saturday, respectively, will also determine whether Harvard gets to play a quarterfinal at home in the playoffs.

“I think these are two huge ECAC hockey games with six points on the line,” Gilmore said about Harvard’s upcoming final stretch. “We’re approaching this weekend like any other weekend—trying to come home with six points. Each game we should be getting better, and we should be peaking right now as we head into playoffs, so I think our goal is to really execute our game plan to the best we can and go from there.”

-Crimson staff writer Shahmir Aziz can be reached at shahmir.aziz@thecrimson.com.