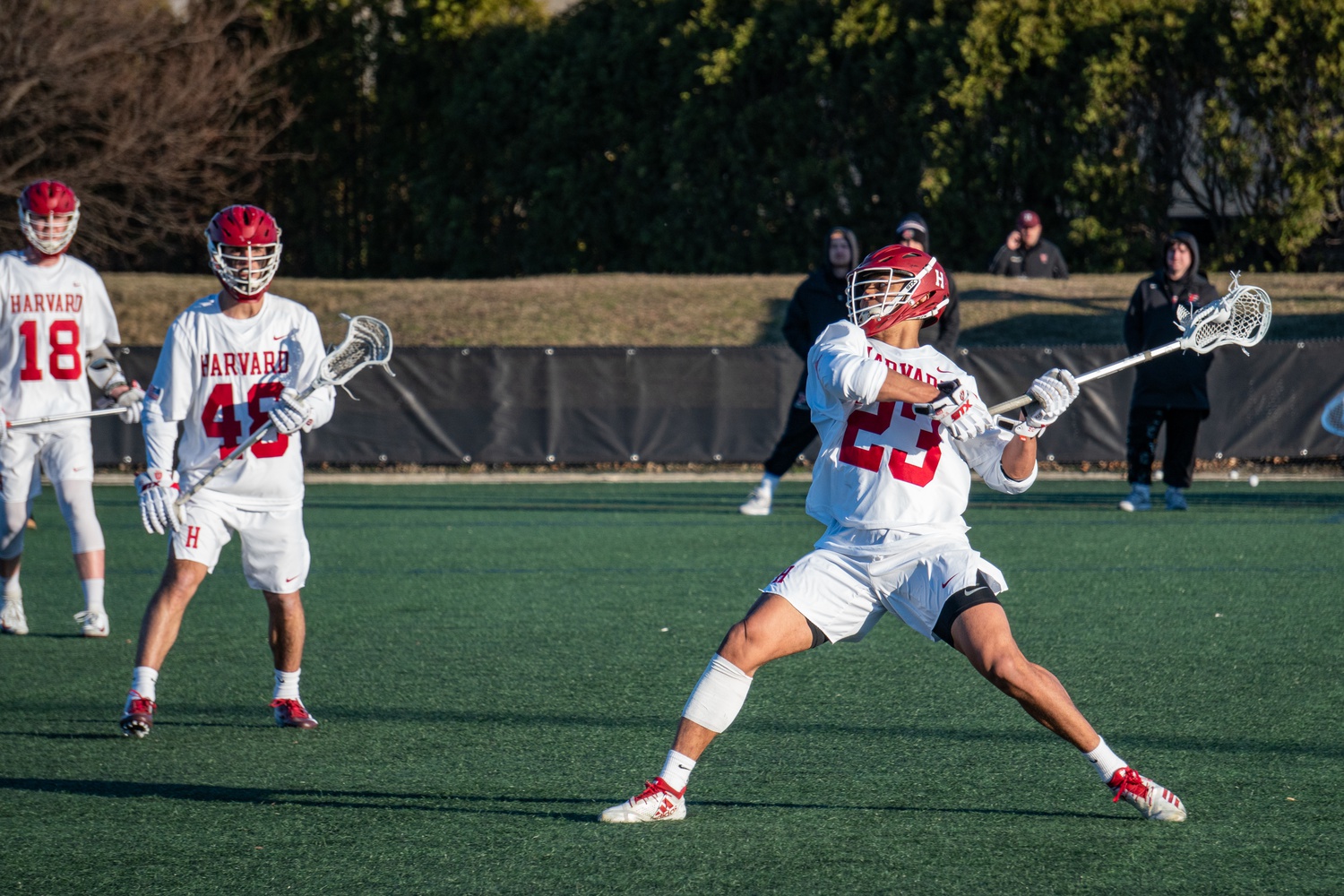 Then-sophomore midfielder Isaiah Dawson winds up to shoot in a 15-12 victory over Fairfield on March 7, 2020. In his next game, which was the first in nearly two years for the Crimson, he helped Harvard with two goals in a 17-4 victory over NJIT. By Brendan J. Chapuis
By Katharine Forst, Crimson Staff Writer

On Saturday, Feb. 21, Harvard men’s lacrosse took the field for the first time in over 700 days. The Crimson led from the onset, eventually taking down the New Jersey Institute of Technology, 17-4.

Harvard attacked decisively from the first whistle with a face off win by senior fogo Steven Cuccurullo, who boxed out his opponent for an easy ground ball by sophomore LSM Greg Campisi. The ball was then rotated down to the attack, where senior Austin Madronic – who scored a hat trick – junior Hayden Cheek, and first-year Sam King put their sets into action. Madronic tallied a pair of goals in the contest, and King made a shifty move around the right side of the crease to score.

“We've just gotten a lot better. Coach Corrigan was a huge help. He works a lot with the faceoff guys, and he helps us with strategy,” Cuccurullo said. “And then all the wings, Ray (first-year defender Ray Dearth), Chase (junior midfielder Chase Yager), Bryn (junior midfielder Bryn Evans), [first-year midfielder] Andrew O’Berry, Greg Campisi, [first-year defender] Martin Nelson, they're all really good athletes, and just really good players. So, it's all them, and how much they've gotten better.”

It took a few possessions for the Crimson to get into their groove. It had good takes on the cage, but was unable to finish. The offense, especially Madronic, worked well on the ride, and so had a lot of possession time in the first quarter as Harvard was consistently able to get the ball back in the midfield.

On the other end of the field, the defense looked much more cohesive than it did in its scrimmage against St. John’s on Feb. 5. Harvard’s starting lineup consisted of first-year Collin Bergstrom, first-year Tommy Martinson, and junior Chase Strupp. First-year Ray Dearth had an excellent showing, with great one-on-one coverage. He forced a couple of turnovers that turned into clean clears up field.

“Yeah, I think I think we did a great job in the ride and limiting their possession so they didn't get the ball a whole lot. I think it's hard as an offense when you're not able to get into a rhythm. I thought we played well early on. We were really physical … in the first half,” commented senior goalkeeper and captain Kyle Mullin.

They worked the ball well from up top, and did a solid job opening lanes for their adjacents so that they could take the drive down the alley. The Crimson used the inside a little bit less than in their previous showings, with the attack mainly driving down the outside. Sophomore attacker Graham Blake attributed their success to unselfish playing.

“It kind of just ended up being how they were sliding. We had stuff open inside and were sharing it, but we ended up having good takes off the dribble … We have a lot of pieces that can get open and create. I think today that's how it was but you never really know where they're gonna come from,” he noted.

Harvard recorded a shutout first half, with Mullin taking the net for the first three quarters in goal. Sophomore Christian Barnard and first-year George Alvarez split the fourth quarter, with Alvarez not allowing a score.

“I think our guys that were running scout for us did a great job this week. I think coming in we felt super prepared,” Mullin said.“We knew what they were gonna do. So, it was just about executing.”

The team will hope to execute again against No. 8 Ohio State on Feb. 26 as it travels to Naples, Fl. to compete in the Southwest Florida Shootout.
–Staff writer Katharine Forst can be reached at katharine.forst@thecrimson.com.