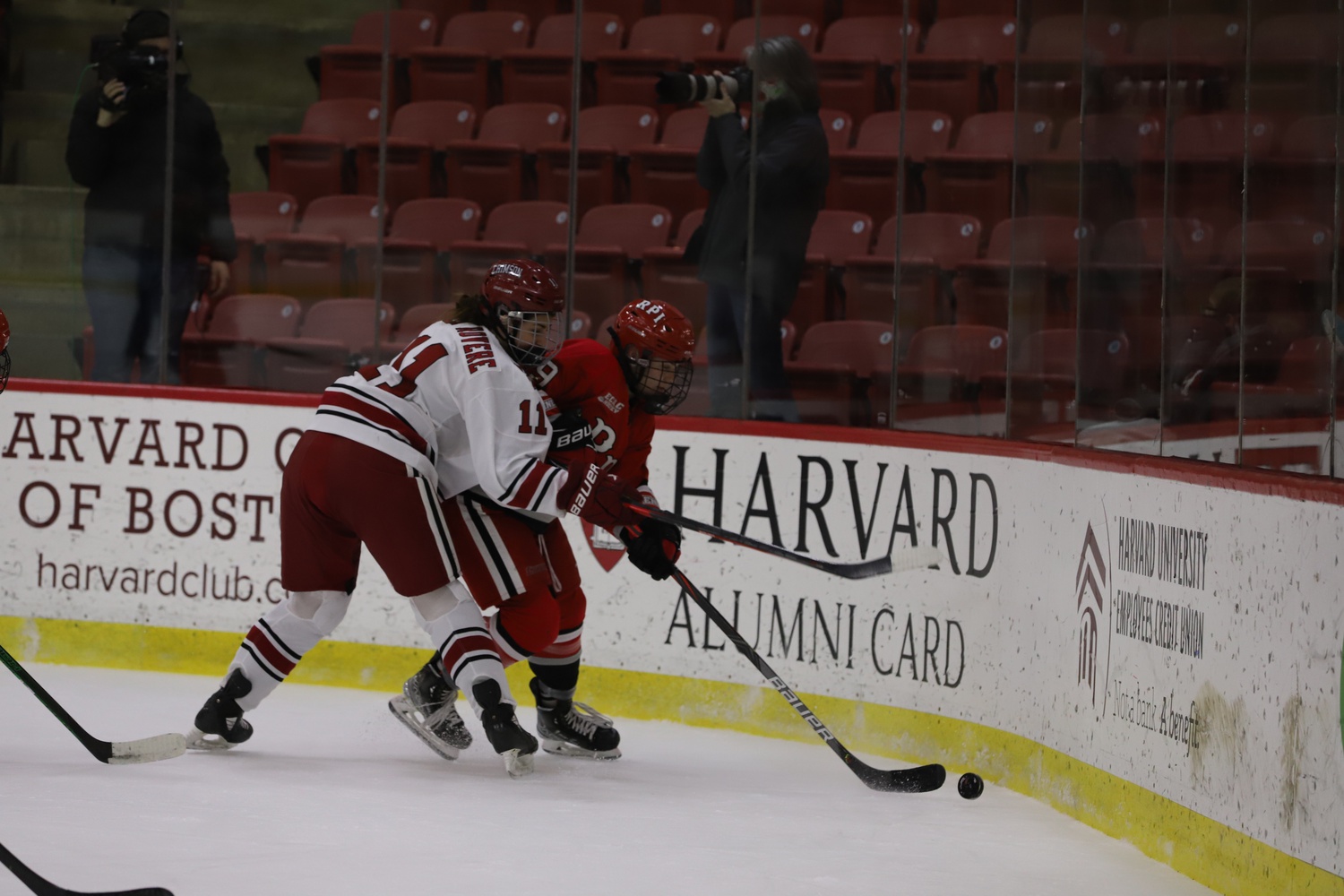 Junior forward Kristin Della Rovere battles along the boards in a 4-3 victory over RPI on Dec. 4. In the final of the Beanpot Tournament, she came away with two goals to lead the Crimson to its first title since 2015. By Crimson Multimedia Staff
By Shahmir Aziz and Christopher D. Wright, Crimson Staff Writers

In 2021, for the first time since its inception, the Beanpot championship was not held due to the pandemic. The three years before that, there had been three different champions out of its four teams, none of them being Harvard, whose last time lifting the trophy came in 2015.

This year, however, the recently crowned Ivy League champions had come to win.

After defeating Boston University 4-1 in the opener last Tuesday to reach the championship match, the No. 6/6 Crimson (18-6-0, 13-4-0 ECAC) came out guns blazing, and after a high octane, dramatic 60 minutes of play, inched past an inspired Boston College to win the game, and hence the championship.

Coach Katey Stone perhaps put it best. “Everyone got their money’s worth tonight - with an incredible hockey game!” she said.

With 3:21 left on the clock in the third and final period, and the crowd going berserk at every interception, pass or play, the championship hung in the balance at 4-4, both teams pushing to the very limits to get over the line in what had been an intensely contested battle so far.

It finally took a sneaky, calculated play by the championship’s MVP, senior forward Becca Gilmore, slipping the puck under the Eagles’ goaltender to break the tie and send the Crimson into the lead for a fifth and final time in the game, ultimately winning 5-4.

“[Stone] had been getting on me to take it to the net, so I decided to try it on that one and it worked,” the Weyland, Mass. native said.

“The whole game we focused on speed, and we had so much fun playing today. We are really fired up to bring it home,” added Gilmore, who also contributed two assists in addition to the deciding goal.

The fast-paced game’s scoreboard swung to and fro, with the Crimson scoring and the Eagles equalizing 4 times, with goals from as far back as the half line, and as close as the goaltender’s circle.

When asked whether the team changed its strategy near the end to break this continuous tiebreak, junior forward Kristin Della Rovere, who was the leading scorer of the game for Harvard with two goals, said, “We just tried to stick to our game and do more of the same.”

Rovere’s offensive partnership with Gilmore was clear from the initial puck drop, as the duo peppered Boston College goaltender Abigail Levy with 22 shots on target, scoring three goals in the process.

Boston College’s coach Katie Crowley also had high praise for the Crimson’s offense: “Their big guns showed up and were able to put the pucks in.”

Stone was extremely proud of her team’s narrow victory“Good teams win one-goal games under a lot of pressure, and that’s what they did,” the 27th year head coach said.“They got the job done start to finish.”

“We are going to enjoy this and be proud of our win and celebrate as a team, but we have bigger goals in mind,” Della Rovere added. “Moving forward, we have to look towards the ECACs and even nationals.”

Stone also felt that this game was a great stepping stone for the Crimson, heading into the final stretch of what has been a very successful 2021-22 season. “It's exactly what you want, a championship setting under pressure to practice in,” she said.

Currently trailing first-placed Yale by half a point in the ECAC, Harvard will next welcome Princeton (9-11-4, 7-8-2 ECAC) to Bright-Landry Hockey Center on Feb. 11, followed by four last games of the regular season before the ECAC playoffs begin on March 5.

-Crimson staff writer Shahmir Aziz can be reached at shahmir.aziz@thecrimson.com.