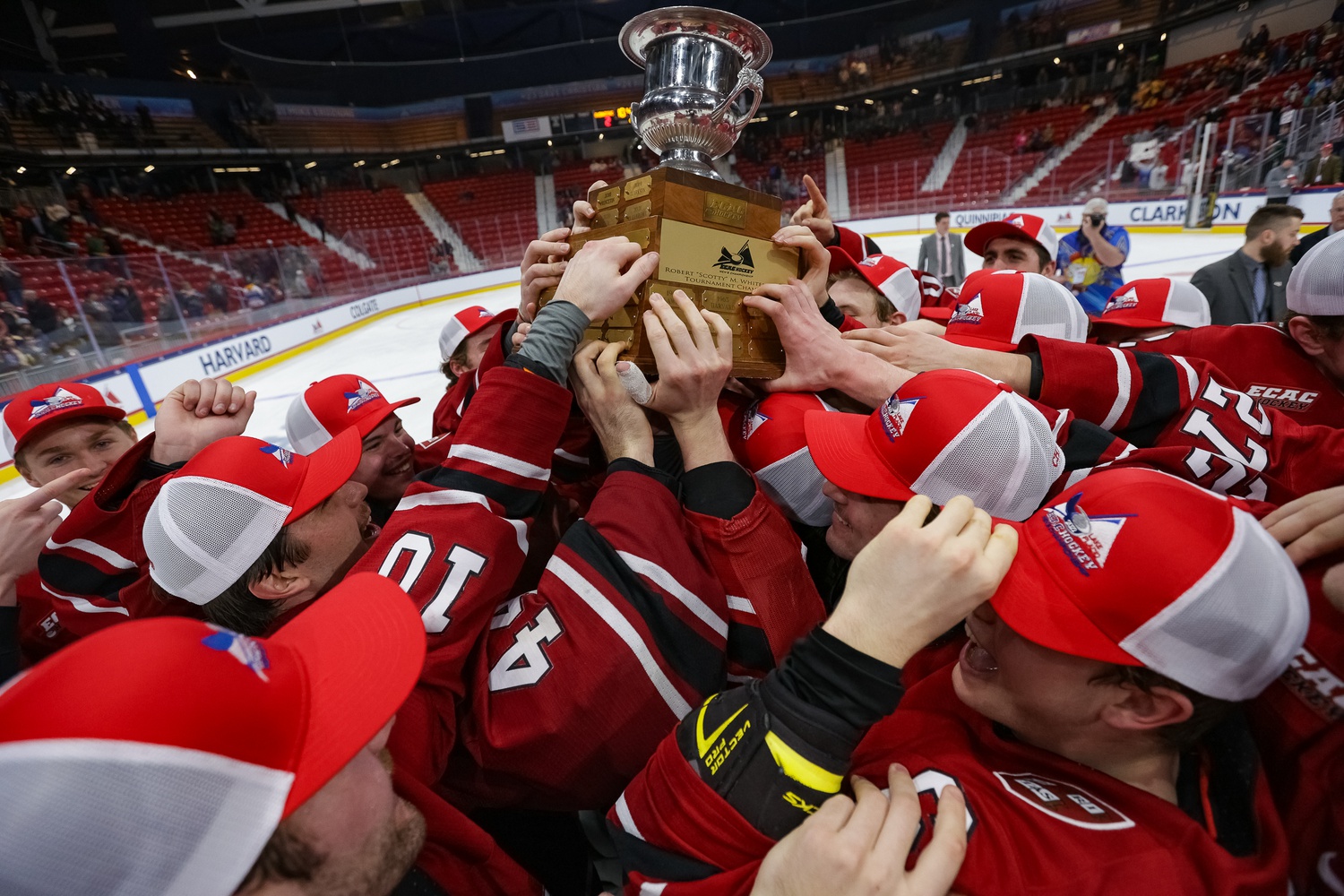 The Harvard men’s hockey team punched its ticket to the NCAA tournament for the fifth time in the last seven years on Saturday with an upset 3-2 overtime victory over No. 6/6 Quinnipiac in the ECAC championship game.

Harvard will face No. 1/1 Minnesota State on Thursday in Albany, N.Y., in the opening round of the NCAA tournament.

Harvard defeated RPI and Clarkson in the ECAC playoffs before hoisting the Whitelaw Cup after the championship victory over Quinnipiac.

The conference victory comes after the Crimson missed two consecutive seasons due to Covid-19.

“I think we learned what it means to not have tomorrow,” said junior goalkeeper Mitchell Gibson, who made a career high 47 saves on Saturday to keep the Bobcats’ high-powered offense at bay. 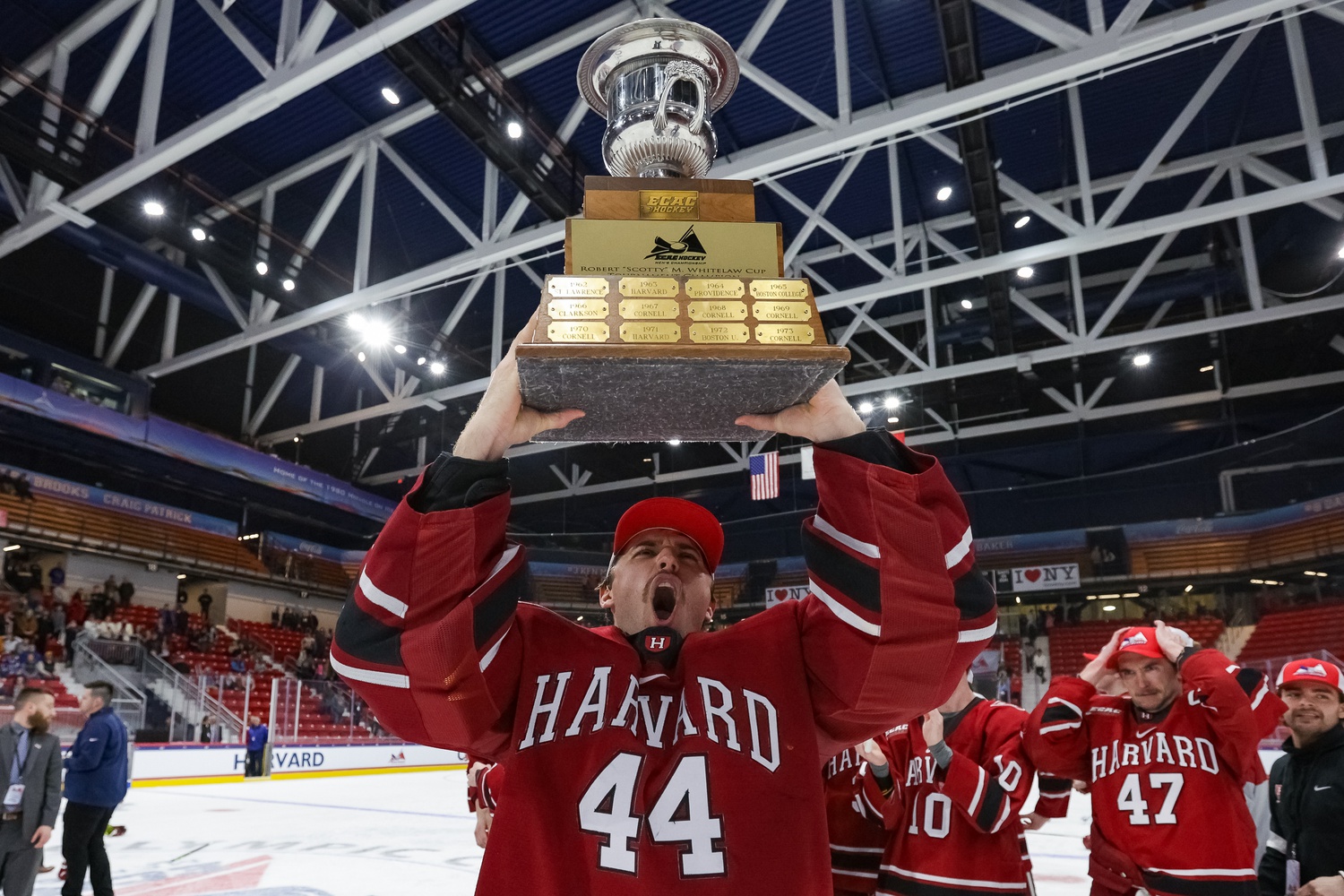 “I think that it just gives us a little bit more gratitude going into each game and each time we even get on the bus with each other,” he added. “We all missed each other a ton last year so, yeah, a ton of gratitude and just thankful we got in this position alone, to win it is just unbelievable.”

The Crimson went into Saturday’s conference championship as underdogs against the Bobcats, which entered the contest with a league-best 18 conference wins. But Harvard rode rock-solid goaltending from Gibson and a game-winner from Coronato past Quinnipiac in a back-and-forth thriller that took place in front of a crowd of 4,478 at Herb Brooks Arena in Lake Placid, N.Y.

“[They] gave us more than we could handle tonight. … I’m very proud of our guys for sticking with it and battl[ing] through some adversity in the game,” head coach Ted Donato ’91 said. “Some guys banged up, but very proud we were able to find a way to win the game.” 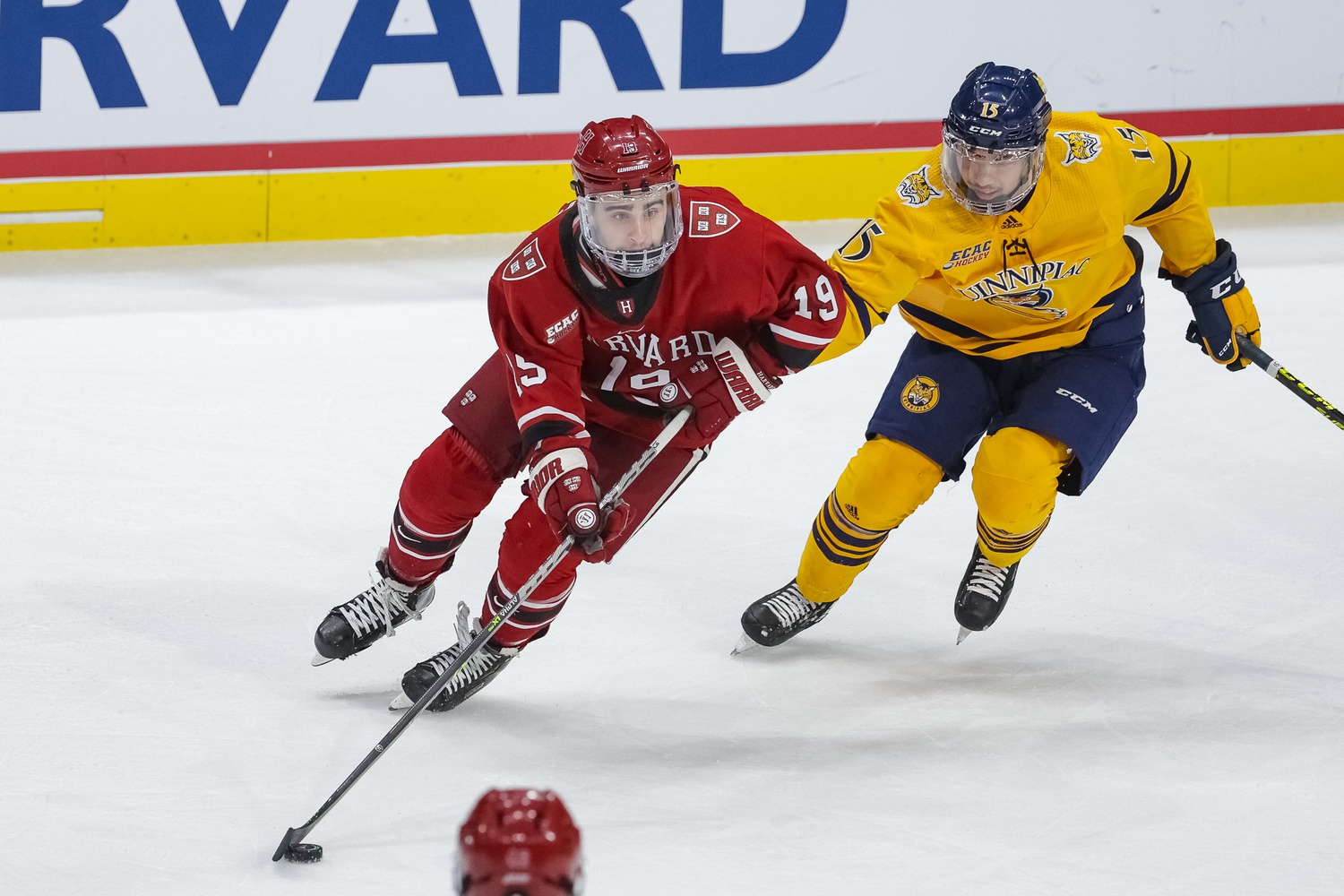 Harvard came out hot, scoring the first goal of the game just over one minute after the opening faceoff. Junior defenseman Ryan Siedem banked a shot in off a Quinnipiac defenseman to put the Crimson on the board early. Senior defenseman Marshall Rifai was credited with an assist.

The lead wouldn’t hold for long, however, as Griffin Mendel evened the score for the Bobcats, capitalizing on a two-on-one rush just over four minutes later.

Quinnipiac maintained an aggressive and tactical offense, outshooting Harvard 49-17 in the contest. The Bobcats pulled unconventional moves such as pulling goalie Yaniv Perets (14 saves) for an additional skater multiple times during the first period — a strategy often kept for desperate third period situations. But the move paid off following both instances: Harvard junior forward Baker Shore was sent to the box. Harvard’s penalty kill unit diffused both advantages to keep the game tied into the second, led by junior goalkeeper Mitchell Gibson, who recorded a career-high 47 saves in the game.

The physical back-and-forth play continued in the second period. The teams each had unsuccessful power-play chances early in the first period. But just under nine minutes in, the Crimson was given a second chance that it was able to execute. A cross-ice pass by Harvard freshman forward Matthew Coronato found first-year defenseman Ian Moore, who buried the puck behind Perets to give the Crimson a 2-1 lead. Harvard was forced to defend for much of the remainder of the period, but fended off the Bobcats offense to maintain a one-goal lead going into the final frame.

Quinnipiac entered the third on the attack, determined to even the score. It dominated possession, barely allowing Harvard a chance to possess the puck. Gibson and the Crimson defense held strong until first-year forward Alex Gaffney was sent to the box for high sticking 13 minutes into the period. Perets, the Quinnipiac goalie, was again pulled for the extra skater, giving the Bobcats a 6-on-4 advantage. Bobcats defenseman Jayden Lee scored less than a minute into the power play to tie the game at two with about six minutes remaining in the game.

Possession remained in favor of Quinnipiac for the rest of regulation, but it was unable to find a game-winner.

In overtime, the Crimson was able to equal the Bobcats’ aggression. Harvard overcame a Shore hooking penalty, holding Quinnipiac to only one shot during the man-advantage.

Then, just over nine minutes into the extra frame Moore found Coronato, who lifted the puck into the top corner of the net, over Perets’ shoulder, to send the Crimson to the NCAA tournament.

“Ian Moore made a great little drop pass and I honestly just tried to get it on and off my stick as quick as I could,” Coronato said of his game-winner. “The puck kind of had eyes and finally found the back of the net.”

The freshman’s goal allowed the Crimson to lift the Whitelaw Cup in triumph, euphoria, and pride. 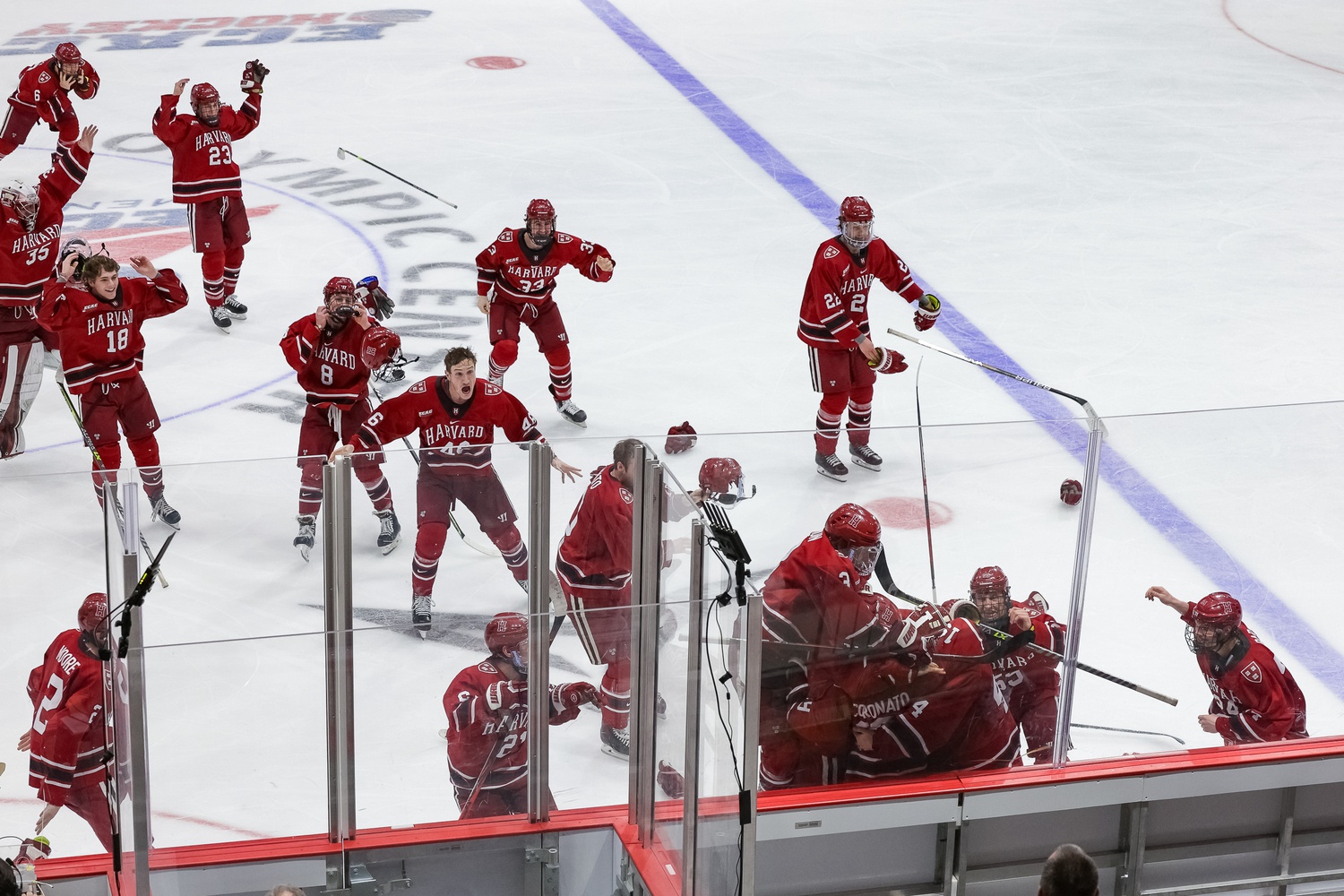 Harvard players celebrate on the ice after a 3-2 overtime victory over Quinnipiac in the ECAC championship game. By Rob Rasmussen / ECAC Hockey

In its sixth straight trip to the conference semifinals, the Crimson faced off against the No. 14/15 Clarkson Golden Knights without a key player, as junior forward John Farinacci missed the contest due to injury. However, Harvard was still able to get off to a strong start on offense. Just over four minutes into the game, sophomore forward Sean Farrell rocketed a slap shot into the back of the net to give the Crimson the early 1-0 lead.

However, despite the strong start, Harvard was shorthanded twice in the first period, going up against the Golden Knights ECAC-leading power play unit that converts at a 23.3 percent clip. After killing off sophomore defenseman John Fusco’s holding penalty, Clarkson cashed in on Siedem’s tripping infraction, knotting the game at 1-1 at the end of the period.

At the outset of the second period, the Crimson’s top line of Farrell, Coronato, and junior forward and captain Nick Abruzzese, continued to generate offense. Abruzzese was eventually able to capitalize on the momentum, batting a loose puck out of the air for the 2-1 lead eleven minutes in.

Clarkson’s power play continued to produce, as it tied the game again after Harvard was whistled for too many men on the ice. Forward Zach Tsekos put the Golden Knights in front 3-2 just over three minutes later to put Harvard’s season on the brink going into the second intermission.

In the defining period of the season, the Farrell-Coronato-Abruzzese line continued to shine, scoring three goals in the third period to send the Crimson to the championship game.

Just over four minutes into the period, Abruzzese rebounded a Farrell shot, poking it home to tie the game at 3-3. The game remained tied until the last five minutes, when Abruzzese made a no-look, backhand, cross-ice pass to a streaking Coronato, who hammered the puck through Haider to put Harvard up 4-3.

Coronato later tallied an empty net goal with 11 seconds left to ice the game at 5-3. Coronato and Abruzzese each finished with two goals and two assists, while Farrell recorded a goal and two assists.

In a thrilling quarterfinal series that saw two overtimes at Bright-Landry Hockey Center last weekend, Harvard defeated the RPI Engineers two games to one to advance to the ECAC semifinals in Lake Placid, N.Y.

In the decisive game of the series, the Crimson and the Engineers fought in a tight defensive battle for the right to move on in the ECAC tournament.

Despite being forced into action by two penalties within the first seven minutes of the game, Harvard’s penalty kill unit withstood the threat behind Gibson’s strong play, keeping the game scoreless going into the back half of the first frame. Then, with just under six minutes remaining until the first intermission, junior forward John Farinacci received a pass at the Engineers’ blue line and made a strong move around the RPI defenseman, cutting to the net and roofing a shot past goaltender Jack Watson, putting the Crimson in front 1-0 at the first intermission.

Harvard carried just over a minute of power play time into the second period, and junior defenseman Henry Thrun made a pass from below the goal line to senior forward and captain Casey Dornbach, who fired the puck past Watson just as the penalty expired to give the Crimson a 2-0 lead.

Both teams tightened their defensive play throughout the remainder of the game, with neither team able to generate consistent offense. With under four minutes remaining in the third period, RPI created a six-on-four opportunity, pulling Watson for the extra skater after first-year defenseman Jack Bar was sent to the penalty box. The Engineers converted the six-on-four to slash the Harvard lead to 2-1, but Coronato added an empty netter to secure the 3-1 victory and send the Crimson to Lake Placid.

In a back-and-forth affair, RPI kept its season alive with a 4-3 victory in double overtime. Harvard jumped out to an early 2-0 lead before the halfway mark in the first, with Farinacci and Thrun both tallying goals. However, Engineers forward Justin Addamo sliced the Crimson lead to 2-1 with a goal three minutes after Thrun’s.

Neither team scored in the second period, as both teams were strong defensively. Midway through the third period, however, RPI stormed back on the offensive end to take a 3-2 lead. Just under eight minutes into the third, the Engineers’ tied it at 2-2, and less than four minutes later, took the lead.

With just over two minutes remaining, the Crimson’s top line answered the bell, as Coronato skated down the left wing and fed a backhand, cross-ice pass to Abruzzese, who rifled a shot through Watson, tying the score at 3-3 and sending the game to overtime.

The first overtime period proved chaotic, as Harvard was forced to kill off an early tripping penalty to Moore andAbruzzese was denied by Watson on a point-blank chance in front of the net. The Engineers had a golden opportunity after Farrell was given a five-minute major penalty for interference, but the Crimson penalty kill rose to the occasion, preventing an RPI score and sending the game to double overtime.

Needing a goal to move on to the semifinals, Harvard was unable to capitalize on the opportunity, as less than 90 seconds into the second overtime, Addamo and forward John Beaton converted a two-on-one odd man rush to win the game 4-3 for the Engineers and force a Game 3.

In a thrilling series-opening win, Harvard mounted a late third-period comeback to take a 1-0 series lead over the Engineers.

RPI forward Ture Linden opened the scoring on a power play halfway through the first period, firing the puck past Gibson for the 1-0 lead. Linden scored again off the post at even strength early in the second period to give RPI a 2-0 lead, and forward Rory Herrman extended the Engineers’ lead to 3-0 just over two minutes into the third period.

With Watson standing tall throughout the game, the Crimson failed to get on the scoreboard until Ted Donato pulled Gibson for the extra attacker with four minutes to play. Rifai cut the lead to 3-1 with a slapshot, and Siedem trimmed the deficit to 3-2 with just under two minutes to play. With the clock ticking down under 20 seconds to play, Coronato answered the call and hammered home a rebound, tying the game at 3-3 and forcing overtime.

Carrying its late third period surge into OT, Harvard secured the Game 1 victory only two minutes into the extra period, as senior forward Jack Donato deflected Thrun’s shot past Watson for the win, sending the Crimson pouring off the bench to celebrate.