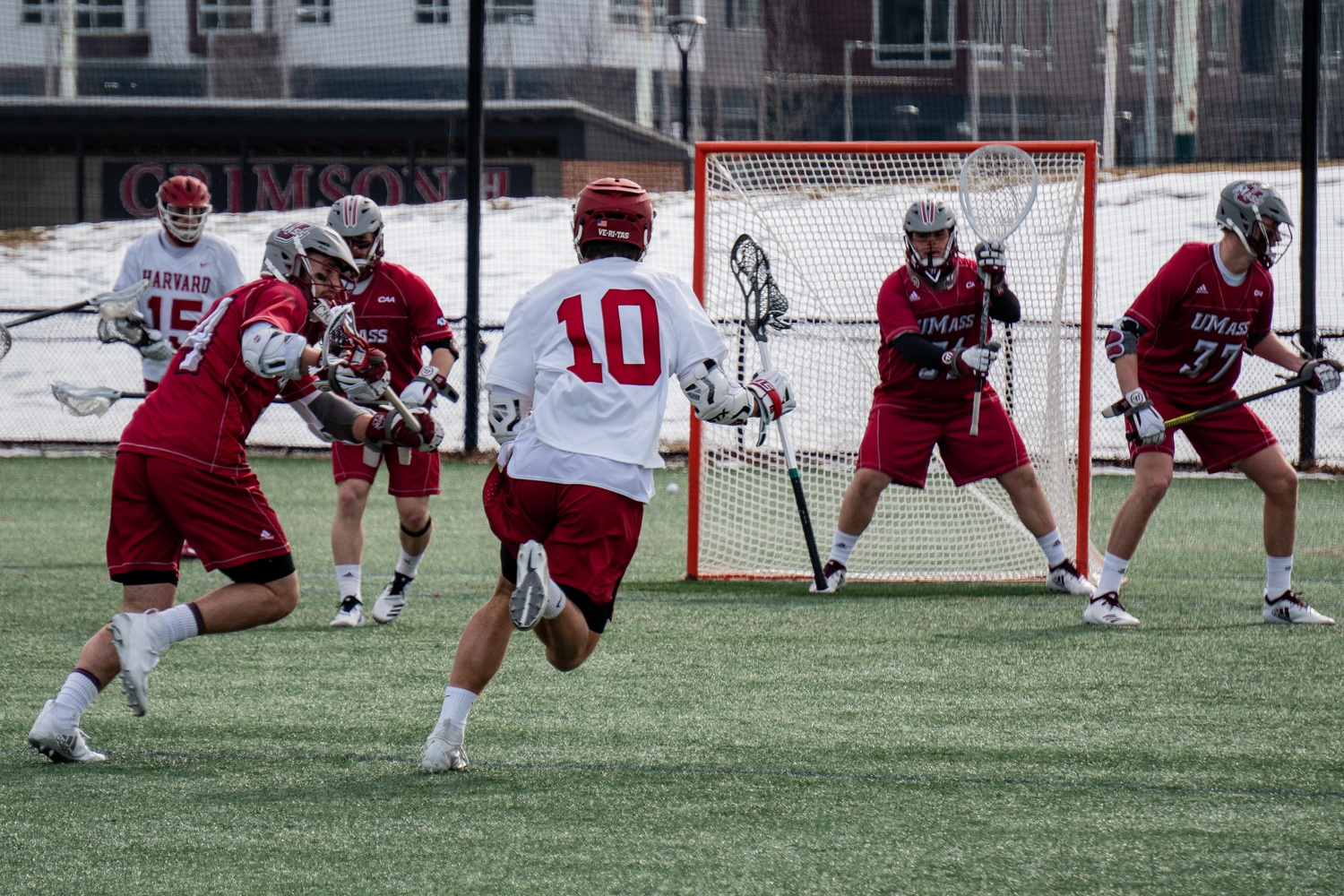 By The Crimson Staff
By Katharine Forst

The men’s lacrosse team (5-1, 1-0 Ivy League) blew past its third-straight ranked opponent in no. 12 Boston University on Tuesday. The Crimson played a cohesive game that helped propel itself to victory over its undefeated Boston rival.

Face off play by senior fogo Steven Cuccurullo (14 for 21 on the day), and wings first-year Martin Nelson, who battled to scoop up 7 ground balls, and sophomore Greg Campisi showed great improvement from the team’s previous showings against Brown and Michigan. The unit went 15 for 25, a much better stat than its 4 for 26 against Brown. Harvard was able to turn many of the takes into either three-on-three or three-on-two scrums if it was unsuccessful in winning the initial clamp, which allowed it to take advantage of more offensive possession time.

“Martin Nelson and Greg Campisi are two great athletes, and two great ground ball guys. They are all to credit. They are able to dominate. They really listened to the game plan well” complimented Cuccurullo.

First-year attackman Sam King was a standout on the offensive line, as he often had his defender hung up in front of the cage which allowed him to attack up the GLE (goal line extended) as well as facilitate movement with feeds from behind. King tallied four goals on the day. The other two guys on the line, senior Austin Madronic and junior Hayden Cheek, both played well. Madronic had three goals and two assists on the day, and Cheek boasted two goals.

“It was offensively good, a team effort – guys putting themselves in good places and being unselfish,” King said. “We need to work on making the smart decisions at all points of the game and just cleaning up some of the stick skills. Overall it was a good win, we gritted it out.”

King was complimentary of the defense, which locked down on its sets and communicated through picks and switches well. First-year defenders Tommy Martinson and Collin Bergstrom were standouts throughout the game and forced Michigan to spread its plays.

“I thought that we played well defensively. They were a good inside team. We missed some slides that led to some goals,” King said. “I thought we guarded well … close defense and our guys didn’t get beat off the dribble too much, but we did get beat inside. There are things to work on before the next game.”

Middies stood out on both ends of the field with junior Nick Loring and first-years Miles Botkiss, Owen Gaffney and Andrew Perry all notching a goal. Loring also boasted two assists for a combined three points on the day. Botkiss made a heads up play sinking a shot from midfield on an open net with BU’s goalie out for the 10 man ride.

The 10 man ride is when a team sends its goalie out of the cage to defend the clear. It can be effective in slowing down and stopping the ball from crossing the fifty in the twenty seconds allotted to the offending team, but is incredibly high risk as it leaves the goal unattended. Harvard did a good job handling this pressure for the most part and was able to successfully clear the ball for the majority of its possessions. When asked, Perry said that the team practiced breaking this zone, but that they will look to be more poised when playing against it in the future. Future opponent and rival Yale employs this zone for much of its ride, so it will be important for the team to feel confident against this style of play..

“We needed to settle down and stay patient,” Perry said. “The first few possessions we rushed it and didn’t really get into our offense, but then once we got into our six-v-six and ran our stuff, and didn’t let them dictate the game, it started to work better for us.”

On the other side of the ball, first-year Ray Dearth, junior Chase Yager, and junior Bryn Evans did well flying in on the fast breaks, fronting their cutters, and were able to clear upfield with time to allow the offense to get in its sets. They made heads up slides and forced BU to stretch its field for outside shots, which caused their offense to make extra passes that resulted in sloppy play that Harvard capitalized on by fighting for ground balls.

Senior goalie Kyle Mullin was on fire in cage. He made 12 solid saves, stuffing countless BU attempts on the doorstep. His clearing was also impressive as he helped the defense break BU’s ride.

The team will look to clean up its play a little bit before its game against Dartmouth on Saturday. The man up unit went 0-2 on the day, and junior attackman Hayden Cheek commented after the victory against Brown last week that special teams was an aspect the squad was looking to improve on, so they should be looking to continue improving on that.

The team is excited for more league play to get underway.

“Obviously our goal is to win this game, and to win an Ivy League title, and that starts with this next game. I’m super excited to play them, they are … really good this year,” Cuccurullo said.

The Crimson will host The Big Green on Jordan Field at 4pm on Saturday, March 26th for its second game of Ivy League play.