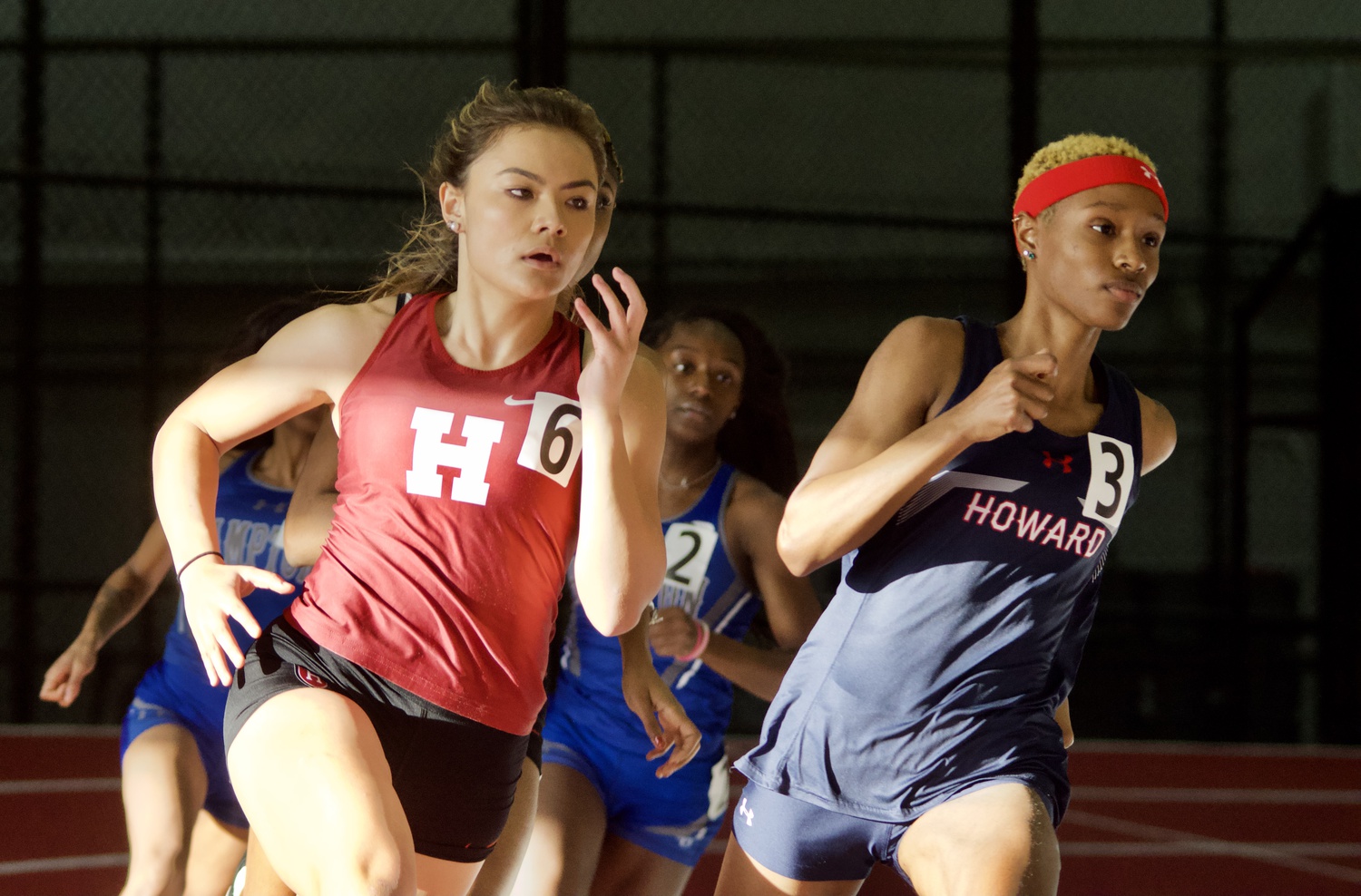 Harvard track and field participates in the Dec. 4 Ivy and HBCU Challenge, in which it earned 155 points for the women and 113 for the men. This weekend, the men came second in the Ivy League Indoor Championships and the women came first. By Ben Y. Cammarata
By William Connaughton, Crimson Staff Writer

Following its successful pre-championship season, the Harvard track and field team traveled down to Armory Track in New York for the Ivy League Indoor Championships. The Crimson continued its season-long dominance, with the Harvard women placing first overall and the men placing second.

Going into the meet, Harvard has placed either first or second place in all three of its prior team meets in the winter season. The Crimson had hopes to improve upon its 2020 finish, when both the men and the women finished in second, and it did just that. Both teams set point records in the meet, with individuals breaking Harvard and meet records along the way.

For the Crimson women, freshman athlete Izzy Goudros placed third in the long jump with a distance of 5.92m. Fellow first-year Anastasia Retsa came up just shy of victory in the pole vault, finishing in second with a height of 4.00m. In other field events, senior thrower Chelsea Offiaeli came up clutch in her final throw of the shot put, capturing 14.58m of distance to claim second place overall. Junior Estel Valeanu finished just behind in sixth in the shot put.

On the track, the Harvard women continued their dominance. In the mile, there was an all-Crimson podium, with sophomore Maia Ramsden, senior Anna Juul, senior Judy Pendergast, and first-year Isabelle Goldstein finishing first, second, third, and fifth respectively. Ramsden’s time of 4:39.89 was over six seconds faster than the champion in 2020. Freshman standout Victoria Bossong narrowly won the 500m, with a time of 1:12.57 that was good enough for second all time in the school record books. Star senior sprinter Tina Martin continued her dominant season, claiming both the 60m and the 200m, with times of 7.45 and 23.42 seconds respectively.

Martin, Bossong, sophomore Egbe Ndip-Agbor, and senior Sharelle Samuel cruised to victory in the 4x400m relay, crossing the line first with a time of 3:43.52. Finally, to round out the meet, senior Jada Jones crossed the line in the 60m hurdles with a blistering time of 8.28. This performance was enough to secure a victory and set a Harvard record for the second time this season.

In its victory, the Crimson women to earned 153 total team points, the most in school history. This meet also represented the first time the Harvard women had won indoor HEPs since 2017.

“The HEPs meet represents the culmination of a season's worth of work. For the first time in the season, we tailor our workouts so that we feel fully prepared for the meet while also feeling our best the day of. Despite this tailoring, however, the mentality remains fairly similar, but becomes a bit more defensive than offensive,” noted senior pole vaulter Kylie Hilton on HEPs. “The emphasis for HEPs is to trust your training and do what you know. Even though scoring is a much bigger component to HEPs, trusting what’s been working as opposed to shooting for the stars, is the best way to set yourself up to score and really contribute to the team.”

For the Harvard men, first-year standout Kenneth Ikeji finished in second in the weight throw, with a best distance of 19.14m. Junior co-captain Kyle Murphy also earned a runner-up finish, recording a mark of 7.39m in the long jump. In the triple jump, the Crimson men dominated the field, taking first, third, and fifth place, with first-year Daniel Falode capturing the win with a distance of 15.40m.

On the track, the Harvard men captured first and second place in the 3000m, the second straight indoor HEPs that the Crimson achieved this feat. In the event, cross-county stars sophomore Acer Iverson and senior Matthew Pereira took the top two spots with times of 8:00.39 and 8:01.52, respectively. Continuing the team’s strong performance in distance running, Iverson, Pereria, and senior David Melville placed first, second, and fifth in the 5000m. Iverson set a meet record in the event, finishing in 13:42.88.

In the 200m qualifying heat, sophomore Lance Ward continued his record-breaking season, setting a new school record of 21.23 seconds and coming second in the heat. In the final event, Ward placed third overall, tying his own record. Harvard was again victorious in the 4x400m, with Ward, sophomore Greg Lapit, junior Aaron Shirley, and first-year Oliver Murcko capturing the Ivy League title with a time of 3:09.37. Their time was good enough for an Ivy League HEPs record.

These performances helped the Crimson men earn 131 total points, also the most in school history. However, the program record was only enough to secure second, as Princeton put up 189 points in the meet. Following their strong individual performances, Iverson and Martin were awarded Most Outstanding Performers on the track. Martin matched the accomplishment that her twin sister Katina Martin won in the 2020 Ivy League Indoor Championships.

“Consistent diligence with eating, sleeping, and recovery. Often spending an extra hour after each practice for recovery activities,” said Murphy on how the team has been so consistent this year. “Dedicating the second half of the winter break to training without distraction on campus was big. [It was] a chance to set good habits and train as elite athletes. We have instilled a team culture of keeping each other focused.”

Harvard will continue its strong season at the IC4A/ECAC meet in Boston on March 5-6.

–Staff writer William Connaughton can be reached at william.connaughton@thecrimson.com.