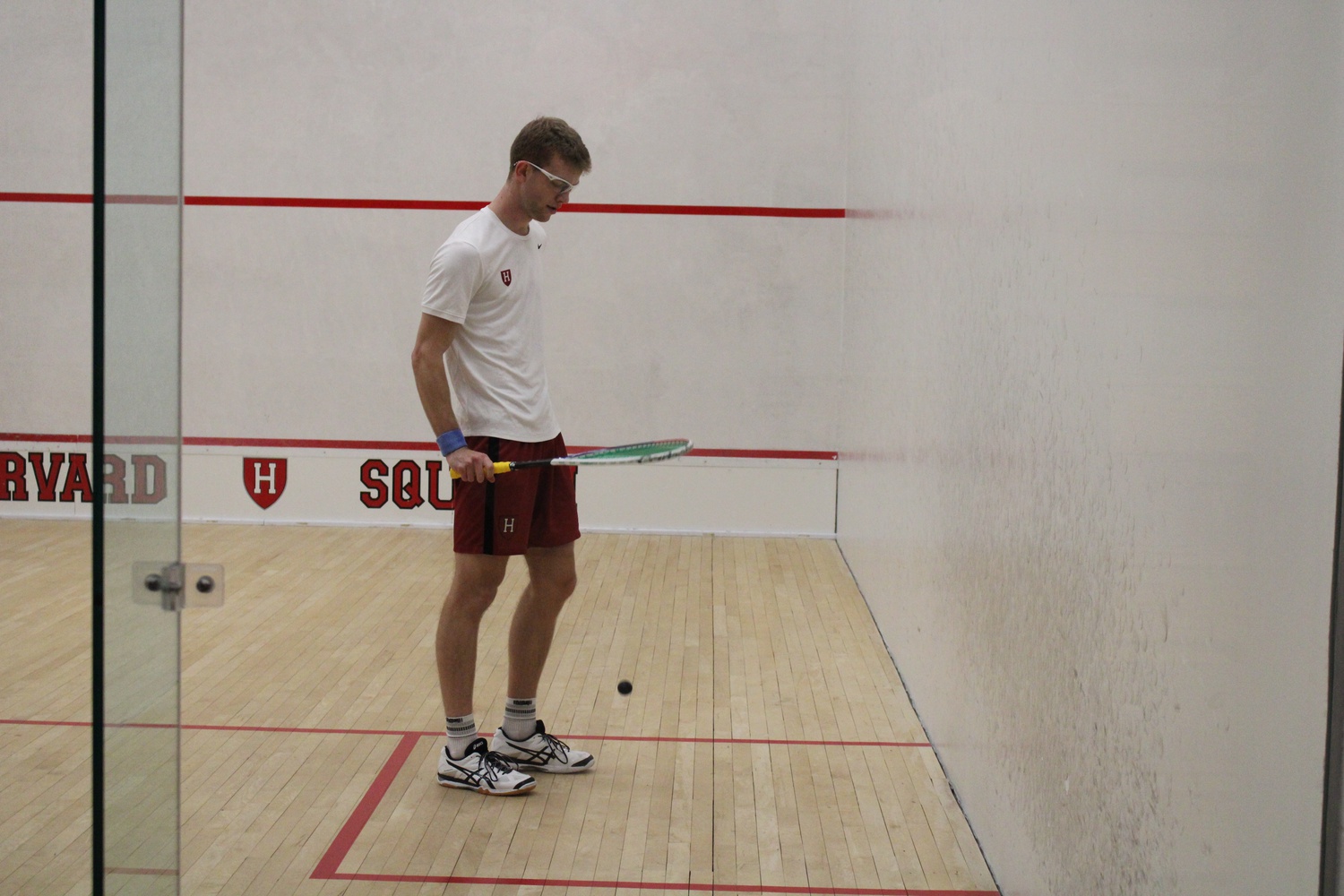 Harvard men's squash gears up for a match against Dartmouth on Dec. 1, which it would win 9-0. After another team national title, Victor Crouin added his second individual trophy to the mantle. By Crimson Multimedia Staff
By Callum J. Diak, Crimson Staff Writer

With two new College Squash Association (CSA) team national championships already in the trophy case, the Harvard squash program set out this weekend to give players their chances to shine at the CSA Individual Nationals.

Seniors Victor Crouin (13-1) and Samuel Scherl (15-0), and junior Marwan Tarek (14-1) returned to Philadelphia, the site of the Crimson’s team title win less than two weeks ago, in a bid for the Pool Trophy. The trio accompanied seniors Hana Moataz (12-1) and Amina Yousry (7-1), who, alongside sophomore Marina Stefanoni (12-1), were representing Harvard in the women’s draw for the Ramsay Cup.

None of Harvard’s individual representatives in either division had lost more than one match throughout the entire team season. In this tournament, though, each school sent their top performers, ensuring that the Crimson athletes’ nearly unblemished records would be challenged.

Yet Harvard was ready. Second-seeded Crouin set an early precedent, defeating his challenger from Trinity College in three well-played games. Later the same day, the Frenchman faced off against No. 7 Velavan Senthilkumar from Columbia, obtaining an identical result.

Defending champion Marwan Tarek opened play against the tournament’s eleventh seed, who hailed from Yale. Tarek executed an efficient and effective tactic against his opponent, scoring 33 points while only conceding 14 to take the match in straight games and join Crouin in the quarterfinals.

After the early victories, though, the Crimson’s lone undefeated man fell. No. 12 Scherl started his weekend off against the University of Pennsylvania’s Aly Abou El Einen. Despite putting up a good fight, losing each game by no more than three points, the veteran player was not able to join his teammates in the next round of play.

In the second stage of the tournament, Tarek faced off against one of Harvard’s regular season rivals from the University of Pennsylvania, No. 3 Andrew Douglas, who proved to be a challenging opponent. After dropping the first two games, Tarek made a late run to take the third game in a thrilling 11-9 fashion. The comeback, however, was not to be, as Douglas claimed the fourth to secure his spot in the semifinals.

And thus three became one: if the Crimson hoped to secure its fifth straight Pool Trophy, it had to be because Victor Crouin, the two-time Ivy League Player of the Year and 2018-19 Individual National Champion.

In Ramsay Cup action, all three of Moataz, Yousry, and Stefanoni emerged victorious from the initial round of sixteen, vanquishing opponents from Trinity College, the University of Virginia, and Princeton respectively. The top-seeded Moataz allowed just six points in her first match to advance to the quarterfinals.

Moataz then cruised past Cornell’s No. 7 Wen Li Lai in three straight games in the second round. No. 4 Stefanoni followed her teammate through to the national semifinals after a sweep of Yale’s No. 12 Sneha Sivakumar.

Yousry found herself early in a 2-0 game deficit to No. 3 Malak Ashraf Kamal, even after taking her into extra points in game one. Yousry seemed to apply a tactic change, commanding control of the pace of the play. After two more games, the match was tied. In the final game, though, Kamal recovered her edge. A colossal battle climaxed with Kamal barely scrounging out the final point required to take the game 11-9 and the match 3-2.

Saturday at the Specter Center proved to be just as action-packed as the previous day. The Crimson had three national semifinalists in Crouin, Moataz, and Stefanoni.

In his semifinal match-up, Crouin had a chance to avenge Tarek’s elimination as he faced off against Douglas. The Frenchman seized the opportunity and executed a convincing sweep, winning the second game 11-1 to send himself into the finals the next day.

While Stefanoni battled with No.1 Sivasangari Subramaniam from Cornell, Moataz was locked in a duel against Trinity’s Kamal. Each game, the two traded point after point, until Moataz was finally able to string together a quick set of points to edge out her opponent and take the match 3-1.

Stefanoni lost in a tight battle against Subramaniam, just missing out on an all-Harvard Ramsay Cup final.

The draw was set for Sunday: senior squash stars Crouin and Moataz each had one match left to bring the CSA individual title home to Cambridge.

Moataz found herself in an exciting final, looking to complete a comeback from two games to one down against Subramaniam. An exceptionally composed fourth game meant Moataz had tied the match at two games apiece. But in the final deciding game, Subramaniam managed to come out on top. At the end of a successful season, Moataz now adds another CSA individual runner-up accolade to her collection, a feat which she previously accomplished as a sophomore in 2019-20.

The Crimson’s last hope for an individual title, Crouin, took the court against Princeton star No.1 Youssef Ibrahim. Crouin’s sole regular season loss was in a five-game thriller against Ibrahim, but this time around the Harvard phenom hoped to flip the script. Five exhilarating games later, that’s exactly what he did.

After an exhausting first set, culminating in a 16-14 win for Crouin, the senior seemed to take the match’s momentum in hand. Ibrahim however, did not go away. The two athletes battled intensely the next two games, with the Princeton player narrowly winning both.

Down 2-1, Crouin dug deep into his bag to gather the ingredients for a comeback: stamina, force, and intentionality in his shots. Crouin dove and lunged for each play, forcing Ibrahim to follow suit to return the thunderous backhands from the Crimson athlete's racket. The spectacular play in game four and game five of the final was drowned out by the roars of the Specter Squash Center. Emerging from the aftermath of an incredible match was Crouin clutching the Pool Trophy to conclude his incredible collegiate career. In his time at Harvard, Crouin has accumulated three CSA team national titles and two individual national titles.