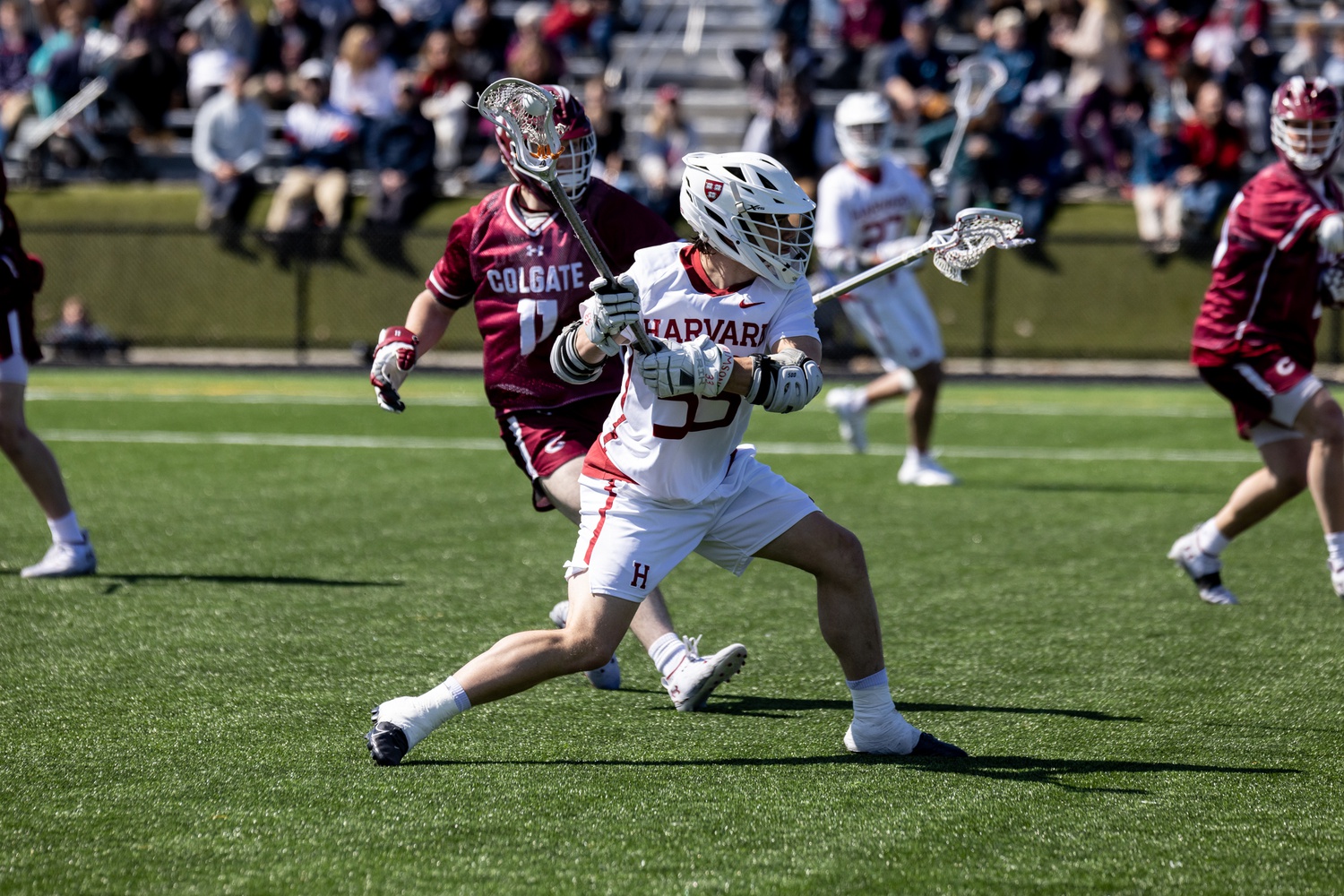 Senior attacker Austin Madronic fires a shot during a 7-6 victory over Colgate on April 2. On Saturday, Madronic's three assists were not enough to secure victory for the Crimson, which fell to Penn, 11-8. By Dylan J. Goodman
By Katharine Forst, Crimson Staff Writer

After a hard-fought battle, No. 13 Harvard (7-3, 2-2) succumbed to the No. 11 Penn Quakers in a tight 11-8 loss in Philadelphia. Playing at a much higher caliber than in its April 9 loss to Cornell, the Crimson brought energy and fight.

With Harvard leading 4-3 at the half, the game seemed to be quite even. However, Penn went on an unanswered six-goal run, outscoring the Crimson 5-0 in the third quarter. This was not due to a dip in Harvard’s play; it was due to a shift in Penn energy, as Quakers head coach Mike Murphy moved his senior midfielder Sam Handley to attack, forcing the Crimson defense to re-evaluate its matchups. Handley had five points on the day in the form of four goals and an assist.

“We played hard and competed well. We just have to play for all four quarters,” sophomore LSM Greg Campisi noted. “Giving up five goals and scoring none in the third quarter hurt us tremendously. We know that we can play with anybody; we just need a full 60-minute effort.”

The first quarter was sloppy for both teams, with the nerves of league play forcing some errant passes and questionable takes on the offensive end; it was a low-scoring quarter as a result, with Harvard entering the first intermission with a 3-2 lead.

Senior goalie Kyle Mullin again had a great showing, demonstrating his athleticism as a member of the 10-man ride unit. He also excelled during the clear, in which he on multiple occasions took the ball all the way up to the 50 in order to secure Harvard possession before the 20 seconds wound down.

On the other end of the field, the ride was a great point of emphasis for the Crimson; it was effective at slowing down Penn and even stopping the Quakers from clearing entirely. Penn went 19 for 25 on the day, while Harvard went 22 for 26 on its clearing attempts.

“Our 10 man ride worked really well against Penn,” first-year midfielder Owen Gaffney commented. “We were able to stunt Penn’s clearing game, which helped us make plays on offense and defense. It’s something that we found success with recently, and I’m sure we will continue to utilize it.”

However, the Crimson will look to improve on extra man opportunities as well as the face off. Harvard did not take advantage of its man-up sets, only converting on one of its seven. Working on striking during these plays has been something that the team has emphasized in the past. At the face off x, the Crimson only won four of the 22 faceoffs, allowing the Quakers to control the middle of the field. Losing the initial clamp gave Penn more possession time, and allowed it to build momentum on its goals in the third and fourth quarters.

Harvard made a valiant effort at a comeback in the fourth, scoring four goals. Gaffney noted that it was due to leadership on both ends of the field, which should translate into the team’s next showing against Princeton.

“[Mullin] and [Campisi] played great games, and they have been all year. They really energize the team with their focus and intensity,” he said. “We are excited for this upcoming game against a great Princeton team.”

Harvard will host the Tigers on Saturday at 1 p.m. The contest marks the last home game of the season for Harvard, and will be played as the team’s senior day, honoring current seniors as well as members of the classes of 2020 and 2021 who were unable to celebrate during the Covid-19 pandemic. The game will also be streamed on ESPN+.