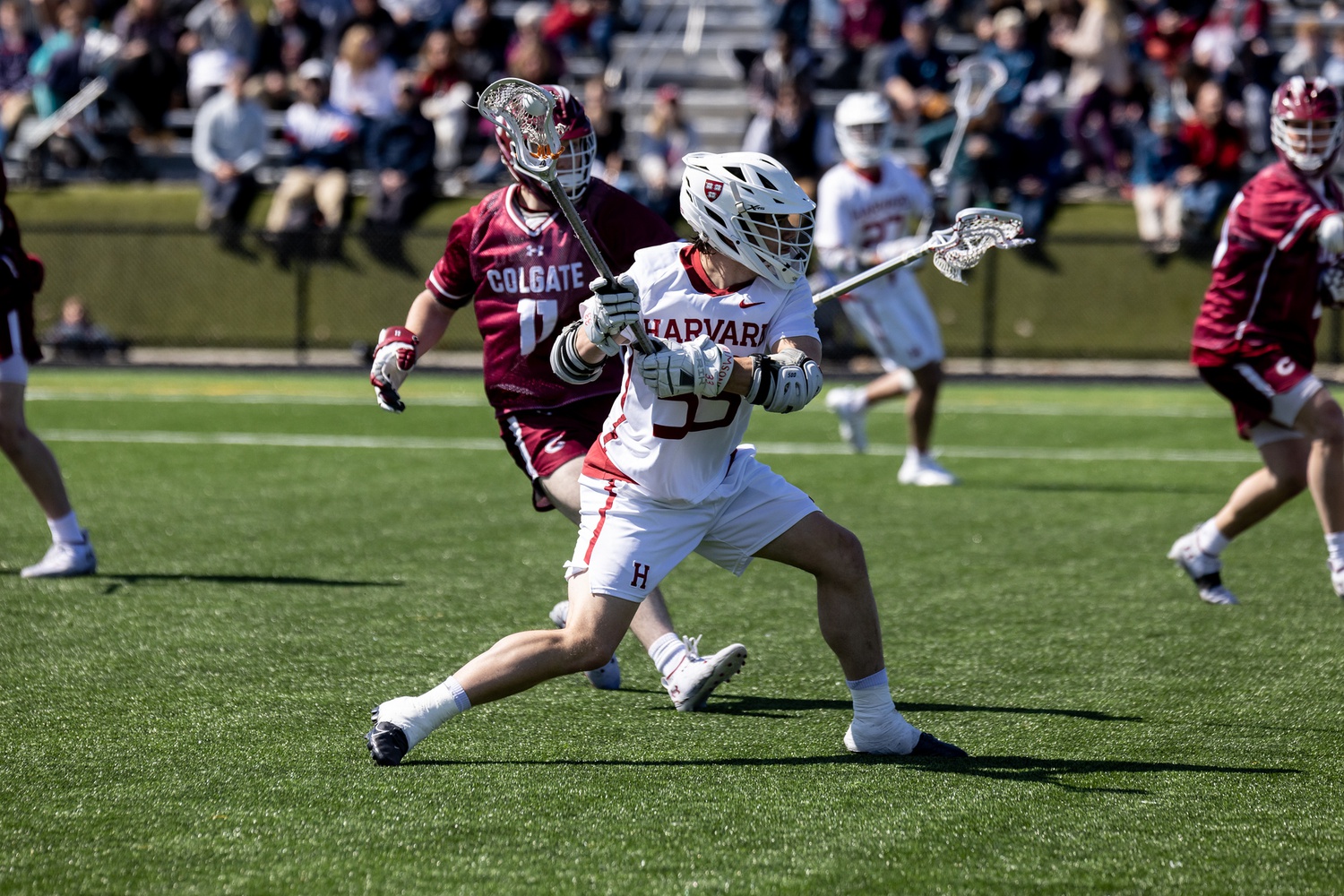 The men’s lacrosse team (7-1, 2-0) remains a member of the top 10 of Division 1 after clinching the no. 10 ranking for the second week in a row after a 7-6 victory over Colgate. This matchup marks the sixth straight win for the Crimson.

The contest was low-scoring and competitive from the initial whistle. Colgate drew first blood with a quick goal, to which Harvard responded with a series of six straight goals.

The game was not a showing of the team’s usual cohesive play as it was somewhat sloppy on both ends. The team had a combined twenty turnovers and was 0-2 in man-up play. However, the squad had a successful day on clearing, going 22-24 and was able to scoop up 31 ground balls.

The face off was an improved showing from previous games, with senior fogos Steven Cuccurullo and Kyle Massimilian going 7-12 and 2-2 respectively. The wings played an integral role in securing possession, with sophomore LSM Greg Campisi, first year LSM Martin Nelson, junior middie Chase Yager, and first-year middie Andrew O’Berry all scooping up ground balls that resulted in possession time for the offense.

“It’s focus, taking more live reps in practice We switched from doing drills on our own to more head to head, which definitely contributed to our success,” Massimilian said. “[We need to win more] clean, and if we don’t win it clean outright, then move to a counter immediately. Our wings do an amazing job of getting wins for us. Picking up ground balls ourselves and then generating offense off of that. Looking to push transition when we win the face off.”

The ride, which included the hustle of middies like junior Nick Loring, first-year Owen Gaffney who had three points (1G, 2A) and four ground balls, first-year Andrew Perry and junior Isaiah Dawson slowed down Colgate’s clear and resulted in caused turnovers that awarded Harvard’s offense with more possession time.

“We were being patient on offense. We were getting good looks. We were sharing the ball well, ” Gaffney noted.

The first three quarters showcased a dominant Crimson attack, but the fourth quarter showed a lapse in concentration that saw Colgate score four straight goals to tighten Harvard’s lead to one. Senior goalie Kyle Mullin came in clutch at the buzzer when he made a save on the doorstep.

“We kept giving them loose balls. We weren’t getting ground balls a lot, so we were giving them a lot of chances that were kind of unorganized, so we couldn’t get set up” Campisi said. “And we weren’t helping the slide. We were kind of sliding and leaving the guy wide open every time, which we were doing well on in the first half.”

There is a lot that the team needs to work on to improve for difficult future contests against league competitors Cornell, UPenn, Princeton and Yale. Gaffney gave insight into how the team will look to perform more cohesively offensively, while Campisi had notes for his fellow defensemen.

“[We need to] keep working on spacing. A lot of the times when we turned it over, missed catches, stuff like that, we were too condensed. We need to space out more cause we find success in space and we are not utilizing all of it. We played a good game, but every game we are going to have to learn to do something better,” Gaffney stated.

Campisi hopes to continue this trend of gradual improvement on the defensive end with increased communication.

“We need to look to communicate better. We started off really well on the same page, so we just have to keep it up for the whole game. We guarded well and our slide decisions themselves were good, we helped a lot at the right times.”

The Crimson will travel to Ithaca, NY to battle against Cornell for a 3pm game that will be available to stream on ESPN+.