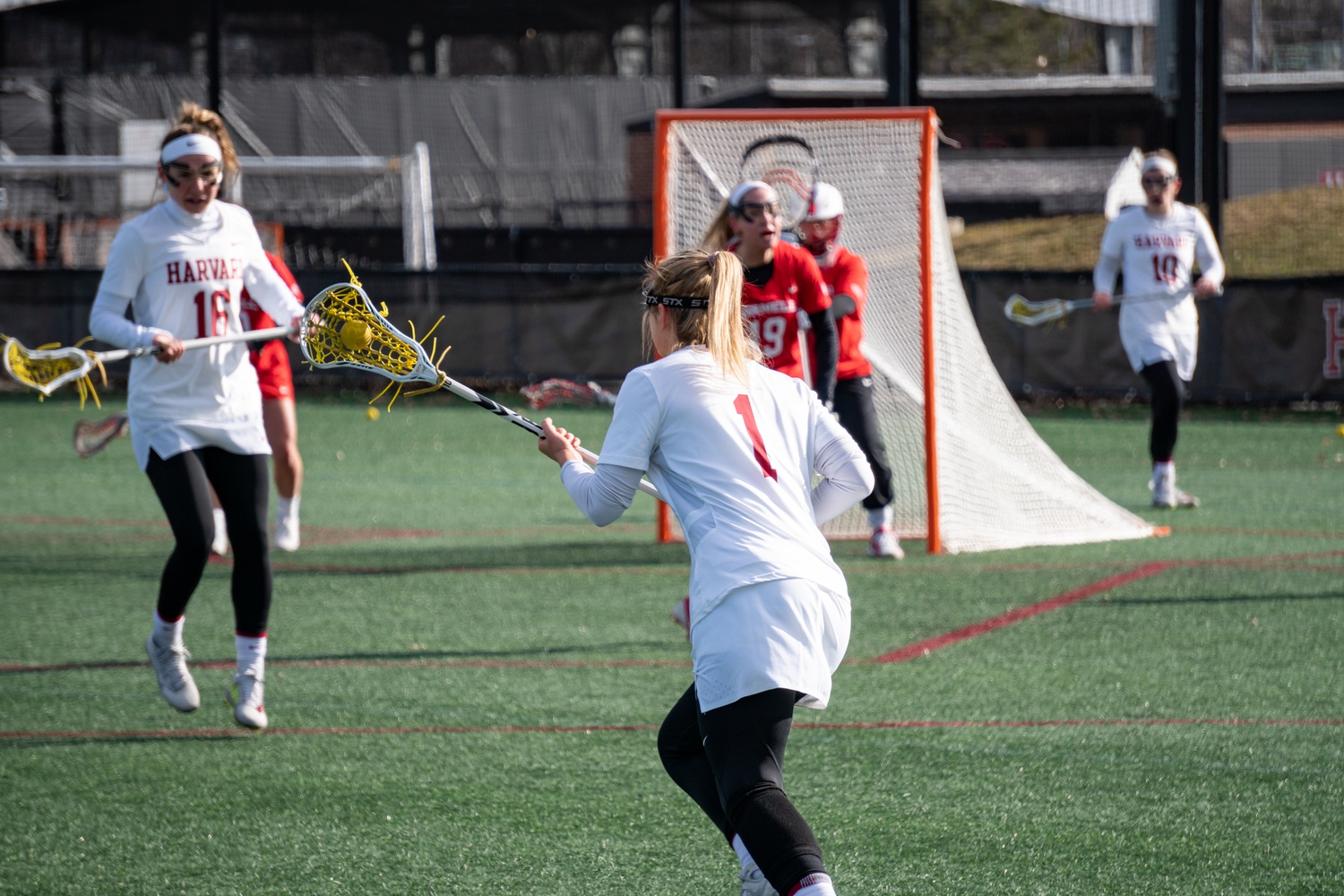 Then-junior attacker Madison Conklin prepares to attack the goal in a 9-8 loss to Cornell on Feb. 29, 2020. A full season of action later, the Crimson concluded 2022 campaign with a defeat to Princeton in the Ivy Tournament. By Brendan J. Chapuis
By Ben Morris, Crimson Staff Writer

For the first time in five years (three complete seasons, given that the 2020 and 2021 matches were canceled), Harvard women’s lacrosse (7-8, 4-3 Ivy League) stepped in between the lines to compete in postseason action.

The Crimson qualified for the 2022 Ivy League Tournament after wrapping up the regular season with two essential victories. The first win was a dominant, 18-8 performance against a local foe from across the Charles River, Boston University (2-15, 1-8 Patriot League).

This set the stage for the Crimson’s biggest game of the season up to that point, with the team set to take on Brown (7-8, 3-4 Ivy League) in its regular-season finale. Given that Harvard and Brown entered the contest with identical records–conference and non-conference–and that the two squads were tied for the fourth seed in the Ivy League, that match basically took the form of an elimination play-in game, as the winner would secure the final spot in the Ivy League Tournament, while the loser would see its season come to a close.

Although both teams came out with energy, the Crimson was able to double Brown’s goal total and entered the half with an 8-4 lead. However, the Bears would not go away and completely flipped the script in the third quarter, rattling off eight straight goals before Harvard was able to squeak in its lone goal of the frame with 1:17 remaining. The Crimson took the field in the fourth quarter in an entirely different situation than 15 minutes prior, now trailing Brown 12-9.

With their backs against the wall and their season on the line, the members of the women’s lacrosse team came together, ready to fight with the hope that this would not be their last 15 minutes together. For two-thirds of the final frame, the teams traded goals and Brown found itself still in front 14-12 with slightly over five minutes remaining. However, in a truly remarkable stretch that spanned only one minute and 11 seconds, Harvard roared back at the Bears and ripped off three straight goals, giving the Crimson a 15-14 advantage with 4:11 left on the clock.

The remaining four minutes of the match were grueling and intense, as players on both Harvard and Brown gave it their all in an effort to keep their seasons alive. Whereas the Bears needed to speed up to beat the clock that was running down on the match as well as their season, the Crimson simply needed to bunker down and hold on. From Harvard’s perspective, every one of the final 251 seconds that ticked off the board seemed to do so at half-speed, as the passing of each brought the Crimson a tad closer to clinching a spot in the postseason, while simultaneously raising the levels of tension and angst among those at Jordan Field.

Harvard battled vigorously to maintain its lead and successfully did so until the clock finally struck zero. When the final horn sounded, feelings of joy and excitement quickly overtook any remaining shreds of nervousness, as the Crimson locked up the fourth seed and booked its ticket to the Ivy League Tournament for the first time in 2017.

Following its bout with Brown, Harvard had six days to prep and rest as much as possible before heading to New Jersey for a semifinal date with No. 9 Princeton (14-3, 7-0 Ivy League). The Crimson took the field against the Tigers earlier this year on April 23 in a matchup that saw Princeton leave Cambridge with a 14-9 victory.

With this in mind, Harvard came into the match looking to avenge its earlier defeat. However, beating Princeton is no easy task and the Tigers stepped onto the field looking to continue their dominance and prove that their unblemished Ivy League record was well earned.

After an early back-and-forth to open the game, Princeton broke through with a goal at the 9:16 mark to surge out to the lead–a lead it would not relinquish for the rest of the match. The Tigers quickly followed this goal by scoring an additional three in a row before first-year attacker Caroline Mullahy got the Crimson on the board. The second quarter followed a similar pattern, with Princeton outscoring Harvard 3-1, bringing the score to 7-2 at the half.

Unfortunately, the energy and play of the Tigers did not drop off in the second half. Although Harvard was able to keep the game tight in the second half, the team could not break through the Princeton defense enough to potentially get back in the game. Princeton cemented its victory in the fourth quarter by building on its lead, eventually taking the game with a 13-6 win.

Although the season may not have come to an end the way Harvard may have liked, the team has certainly taken some major steps this year that everyone involved should be proud of. On top of qualifying for the Ivy League Tournament for the first time in five years, the women’s lacrosse players demonstrated an immense level of pride and commitment that will resonate within the program for years to come. There are only five graduating seniors on the team this year, meaning that, as the snow starts melting and birds start chirping next spring, this unit will be back in almost its entirety, ready for another shot to prove itself.

–Staff writer Ben Morris can be reached at benjamin.morris@thecrimson.com.