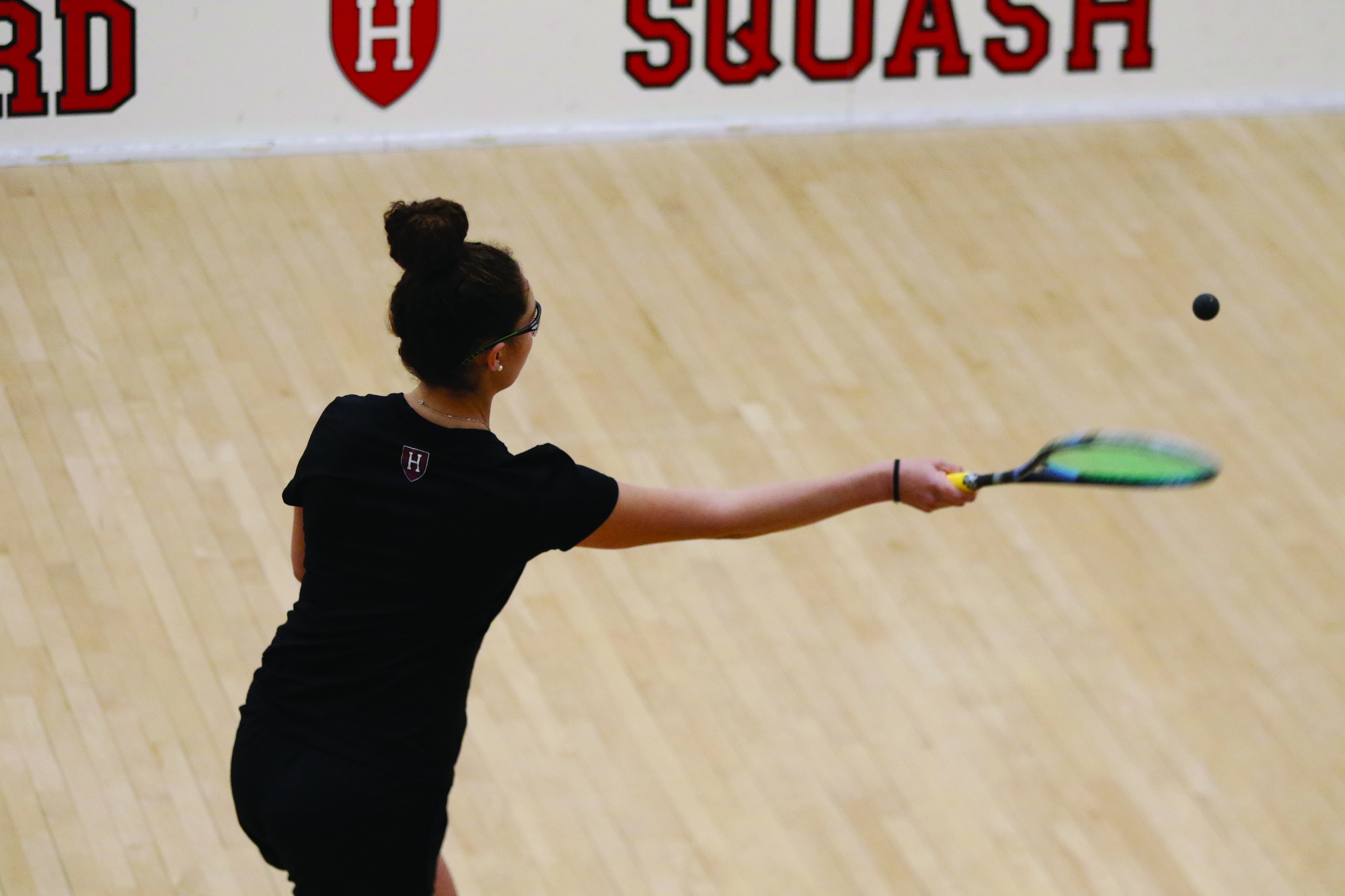 From Cairo to Cambridge: Egyptian Squash Stars Lead Harvard to a National Title

A quick glance at the roster of the 2022 women’s College Squash Association national champions, the Harvard Crimson, will make one thing clear: Harvard is a trove for squash talent. Resumes include national championships, World Junior victories, Pan-American Games appearances, and more.

Delving deeper into the player biographies, one cannot help but ignore the outstanding representation of Egyptian athletes on the Crimson’s roster. Graduating seniors Hana Moataz and Amina Yousry, who have been foundational to Harvard’s success in the past four years, both hail from Cairo, Egypt. Fellow Cairo native Habiba Eldafrawy joined the pair this year as part of the 2021 rookie class.

The three played critical roles in the Crimson’s dominant campaign this past season, with Moataz leading the charge as co-captain and competing as the team’s number one. The veteran Yousry predominantly battled in position number three, though had some skirmishes at one and two. Eldafrawy dueled in the fourth position and even earned the green-light to play as high as the second position, an impressive feat as a first-year athlete. Through their contributions, the Egyptian stars have made themselves a core element of Harvard squash’s identity.

Egypt’s strength in the sport is not exclusive to college squash. The current world squash rankings in the men’s division features three Egyptians in the top five. The women’s podium in the Professional Squash Association world rankings is fully swept by Egyptian athletes. In the past decade, Egypt has established itself as the premier country for squash excellence, producing multiple top-ranked players in the professional league.

“I believe that having so many Egyptian players dominating the top of the world rankings makes the juniors believe that they also can make it to the top one day. I think that getting to watch the top players practicing in front of you inspires you to take the same route as them and excel in the sport just like they did,” Eldafrawy said of Egyptian success in squash. “It’s easier to make it to the top when you see someone living in the same environment as you making it to the top.”

The traditional route to the professional circuit for the top-ranked players in Egypt often bypasses college altogether in order to make time for the intensive training regime needed to perform at the highest level.

“The squash culture in Egypt is really different than in the US,” Eldafrawy said. “Back home, practice was a huge part of my day, even in the summer. I would have one-on-ones with my coach four out of five days a week on top of practice matches as well as fitness sessions. So I would say that college squash is way lighter in terms of practice. This is because college squash gives you the opportunity to play an individual sport in a team environment. This isn’t a thing in Egypt. You mainly play for yourself.” 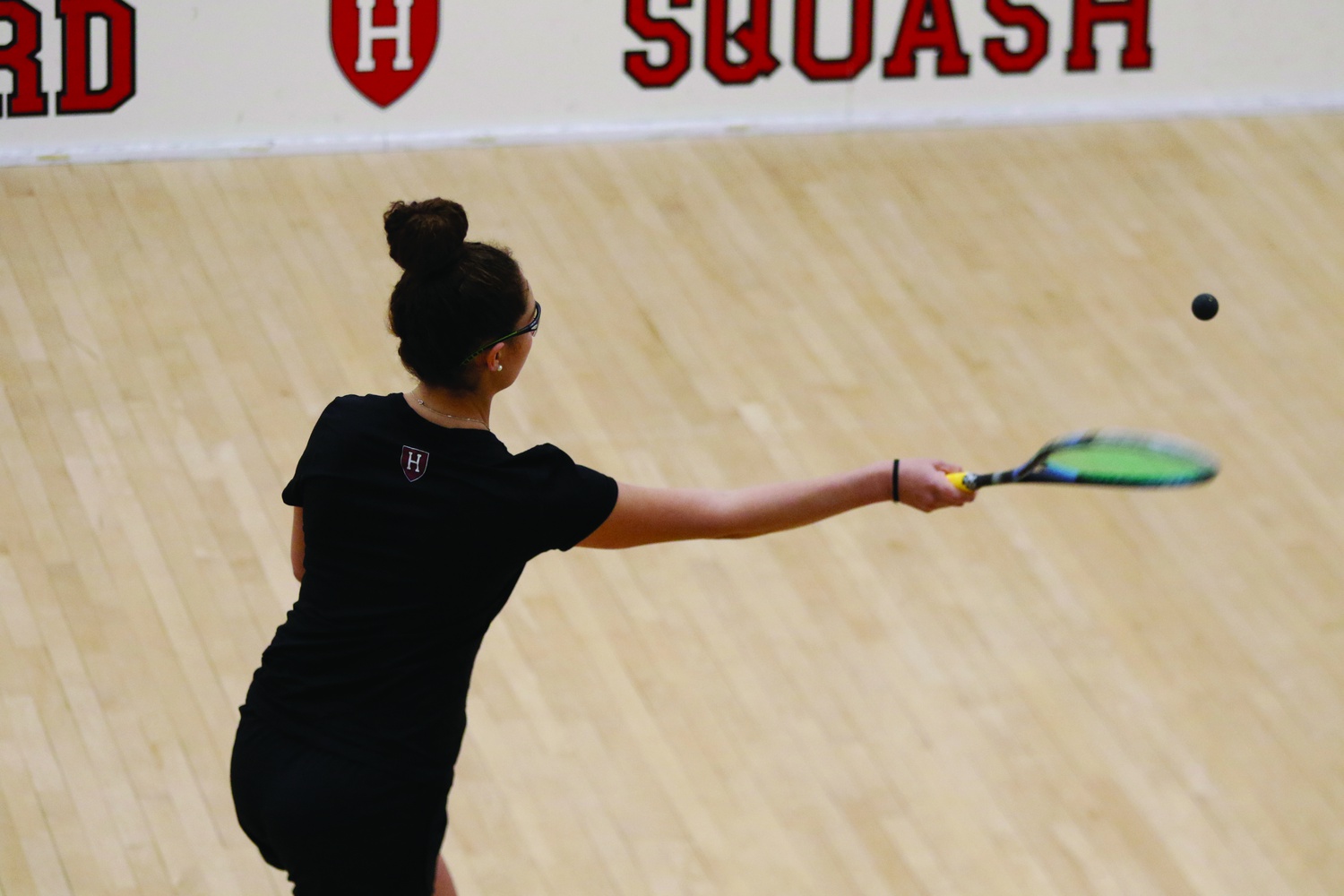 Harvard squash star Hana Moataz competes in a Feb. 8, 2019 match against Yale. Moataz was one of three Egyptian-born players on the Crimson roster. By Timothy R. O'Meara

In recent years, though, college squash recruiting has extended its reach into Egypt, as the CSA hopes to attract some of the best junior talent in the world to a more team-based game. Harvard has a storied and successful history of recruiting squash talent from the northeast African republic. Its program landed its first major recruit in 2012, when it was announced that Ali Farag ’14, then world No. 1 in the World Junior division, would be joining the men’s program at Harvard. Farag has gone pro and managed to climb his way up to world No. 1 in the PSA since his graduation from Harvard. He is a two-time world champion, and in 2017, he and his wife, Nour el-Tayeb, became the first married couple to win the same major title on the same day when they both claimed the US Open.

Farag’s successes for the Crimson helped open the gate for Egyptian recruitment in the United States while simultaneously demonstrating the viability of college squash as a pathway onto the professional circuit.

Moataz is seeking to follow a similar path. Even before graduating college, Moataz has been making waves on the professional circuit. In addition to her CSA accolades, the squash phenom has made multiple PSA finals appearances, including winning two PSA World Tour events, carrying her to a current world No. 49 ranking at the age of 22. She has also helped Harvard’s recruitment efforts in her home country; Eldafrawy partially credits Motaz and Yousry and the legacy of Egyptians in the Harvard squash program with her commitment to the school, citing the significance of being teammates with fellow nationals.

“I chose Harvard for two reasons,” she said. “One was because there were fellow Egyptians on the team … I just felt more comfortable going to a place where people I knew of were already excelling in academics as well as squash. The second reason [for attending Harvard] was that the Harvard women’s team is the best in the country.”

Harvard is a dynasty, embarking on a run of success unparalleled in college squash. The Crimson’s seven straight national titles make the team appealing to any athlete. As Egyptian success nurtures more Egyptian talent, Harvard has been at the forefront of college squash for years now and has manufactured a positive feedback loop for recruitment. It seems that the more stars the Crimson can acquire, the more renowned its program becomes, consequentially attracting more talent to the school.

Head coach Mike Way, alongside the rest of the coaching and recruitment staff, must be given due credit for building such a well-known program and actively pursuing talent worldwide. Eldafrawy explained that she was first drawn to the Crimson by head of recruitment, Luke Hammond, at the 2020 British Junior Open.

The 2021-22 squash season has exemplified the importance of the Egyptian squash tradition for Harvard’s success. As the school furthers its recruiting efforts in Cairo, it would be no surprise to see more Egyptian athletes added to the Crimson’s roster in the coming years.