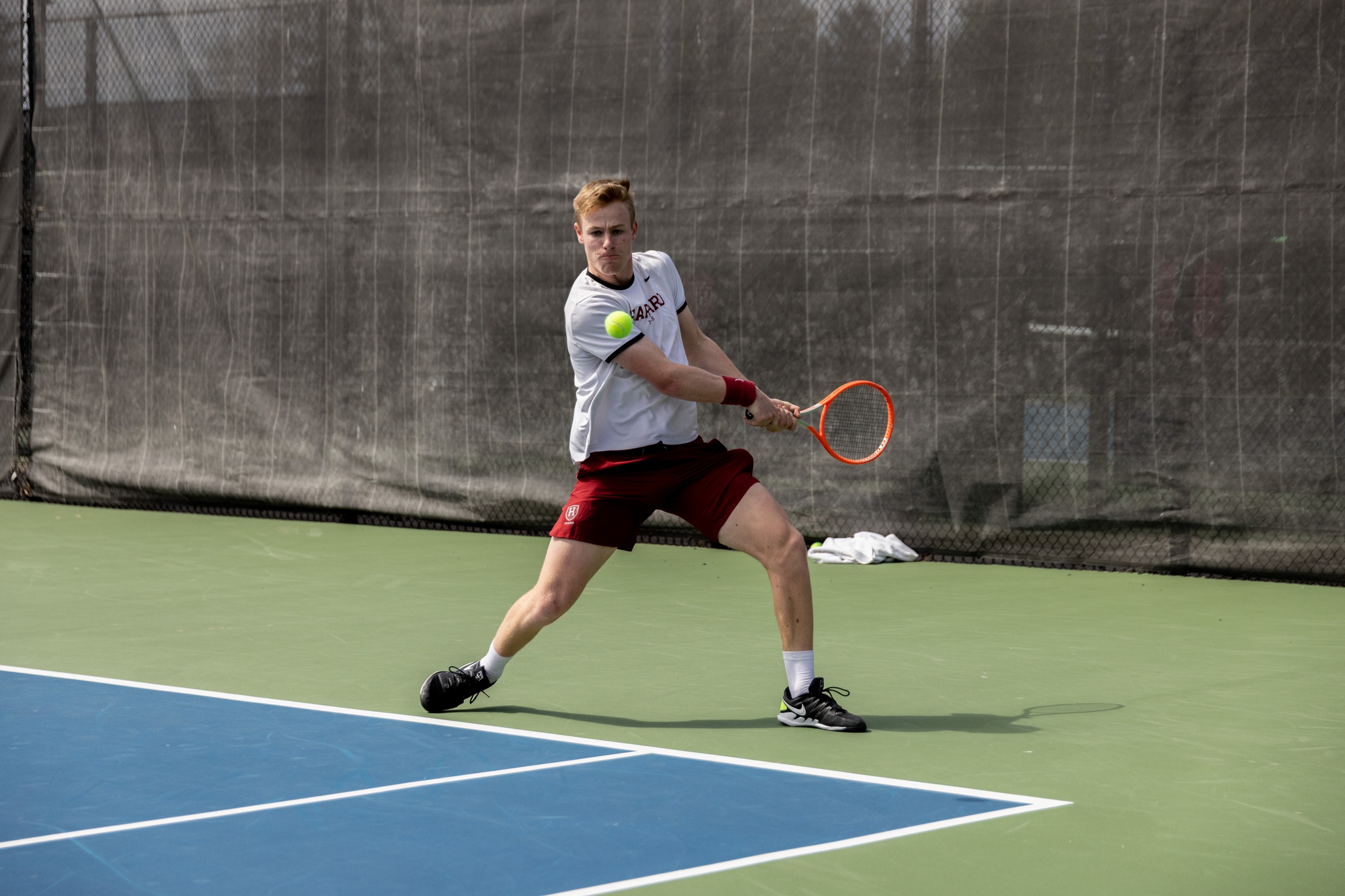 Court Is In Session: Men's Tennis, Team of the Year

The No. 14 Harvard men’s tennis team finished a stellar season in the second round of the NCAA Tournament on May 7, falling to Stanford in a close 4-3 match. The Crimson went undefeated in conference competition, securing its 30th Ivy League championship.

The team’s successful run in the 2021-22 season marked a triumphant return after being sidelined due to the Covid-19 pandemic. Like other sports teams, the start of the fall semester meant rebuilding the team environment and assessing players’ skills after a year and a half of essentially training independently. Harvard head coach Andrew Rueb ’95 said he encouraged players throughout the break in play.

“One of the keys to our success [this season] was just how well our team managed the Covid year off,” Rueb said. “They remained active, and they were still engaged as students, but they were also pushing their tennis games and finding ways to play, and compete, and stay sharp.”

The season started with a bang in September at the Milwaukee Tennis Classic, one of college tennis’ most prestigious tournaments. Sophomore Henry von der Schulenburg won the singles title, defeating USC’s Lodewijk Weststrate in the final in straight sets, 6-3, 6-2. Meanwhile, Harvard took second place in the doubles bracket with the pairing of von der Schulenburg and junior Harris Walker. The Crimson’s success in its first tournament helped build the team’s confidence moving forward.

“It was sort of a big splash from the start, and we realized, ‘Hey, this team can compete on a national level,’” Rueb said.

Indeed, Harvard proved that it could compete with the best teams in the country as the season progressed. The Crimson hosted No. 2 Florida, the defending NCAA champions, as well as Arizona State, No. 5 Michigan, and Cal Berkeley for Chowderfest. Von der Schulenburg once again took a spot in the final, this time claiming second place.

“That fall was when we really set the marker for what was possible,” Rueb said. “One event after the next, proving that we were playing top level competition and more than holding our own.” 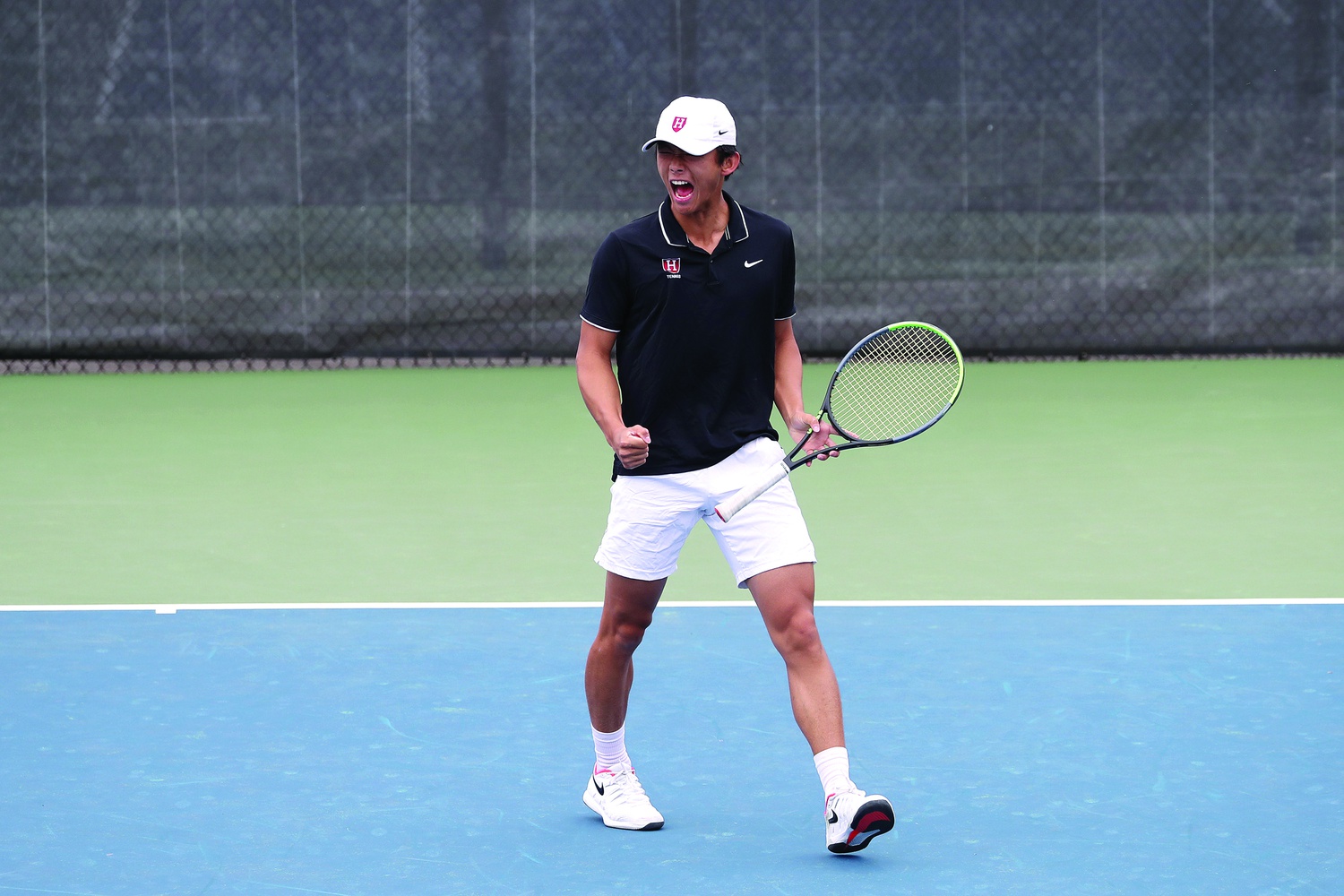 Harvard senior captain Brian Shi celebrates after clinching the Ivy League title in a victory over Yale on April 24. Shi helped lead the Crimson to one of its most successful seasons ever. By Courtesy of Michael Cummo

Three players qualified for the Intercollegiate Tennis Association Fall National Championship in San Diego. The doubles team of senior captain Brian Shi and freshman Daniel Milavsky lost in the Round of 16 to the University of Texas after a first-round win over the second-seeded team in the tournament, the Ohio State duo of Justin Boulais and James Trotter.

Harvard wasn’t discouraged by its fall in the ITA Championship in November, going on to achieve decisive 7-0 wins against Georgetown and Boston College in its first appearance of the spring. Throughout the fall season, captains Shi and junior Steven Sun, along with the coaching staff, fostered a strong team environment.

“Both captains did a great job of both leading by example but also building those connections and camaraderie,” Rueb said.

Shi had an impressive final season, with an overall singles record of 24-6 and a doubles record of 21-13. He went on a 13-match winning streak in singles and clinched the Ivy League Championship against Yale. Shi and Milavsky proved an effective doubles team, securing vital points for Harvard as the top seeds.

“[Brian] has come to embody what Harvard tennis is all about: he’s a great student, he’s a great ambassador, and a beautiful player,” Rueb said of the graduating senior. “It’s been a joy to watch him compete and play at the highest levels of college tennis.”

The heart of the spring season began with the ITA Kickoff in California, where the Crimson faced off against No. 26 Pepperdine, No. 13 USC, and No. 5 Michigan. Despite injuries over winter break and the tough adjustment to outdoor play after a long indoor season, Harvard made a strong showing. The nail-biting match against Pepperdine came down to Shi, whose stunning 6-7(4), 7-5, 6-4 victory brought the final score to 4-3.

“We had two days of outdoor practice before playing one of the most storied programs in college tennis history, and we won 4-3,” Rueb recalled. “This gave us a lot of confidence.”

The Crimson carried that momentum forward and managed to clinch a similarly intense win against Michigan, 4-3, at home. Walker closed out the match as his teammates and the Murr Center crowd supported him. His clutch individual display, in a singles match that determined the team’s overall match result, exemplified the team’s camaraderie and grit. 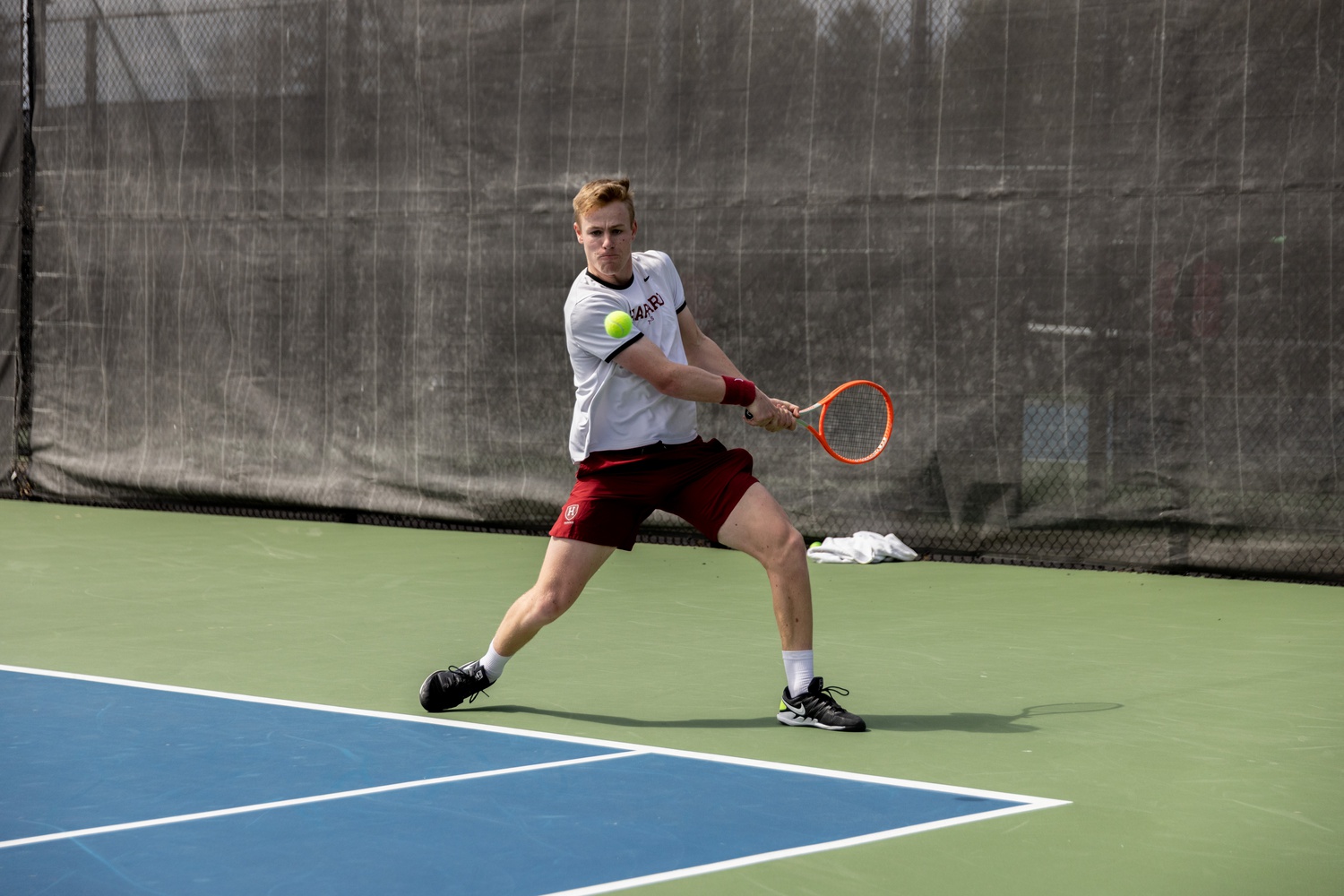 Harvard was a force to be reckoned with for the remainder of the season. In February, the team defeated Columbia to win the Eastern College Athletic Conference Men’s Tennis Indoor Championship. The Crimson stood with an 11-4 record moving into Ivy League play, the last portion of the regular season. The conference was incredibly competitive — four teams and seven individuals from the Ivy League went to NCAAs this year, a record for men’s tennis — but it proved no match for Harvard. The team’s level of play only increased as the season went on.

“One of the things I was most proud of as a coach was I thought everyone was playing their best tennis at the end of the year, and I think that’s a testament to the resiliency and growth mindset that our players and students have,” Rueb reflected after the season.

The Crimson was undefeated against Ivy League teams, its first sweep of the conference since 2008. Harvard also won the doubles point in all six competitions. The team’s strong performance to end the season highlighted its growth over the course of the year.

While its loss to Stanford eliminated the Crimson from the NCAA team competition, the singles and doubles tournaments still remain. Von der Schulenburg, who went 24-8 this season, and Walker, who went 26-7, will compete in the singles draw starting in late May.

“It was clear at the beginning of the season that the top of our lineup was sharp, but the 4, 5, and 6 started out a little slower, and to see where they finished and how far they’d come was what makes our jobs [as coaches] so great,” Rueb said.

All in all, the 2021-22 season was a triumphant return to college tennis for Harvard, and the players are ready to take their success further next season. Von der Schulenburg and Walker will serve as captains, working alongside the coaching staff to set up goals for the team’s performance. Rueb has his sights set on the National Indoor Championships, for which the Crimson has never qualified.

“We want to build on what the team did this year and see if we can’t make another jump on the national level,” Rueb said. “There’s more to be done, and I think [the players are] working hard to get that and meet those challenges.”

— Staff writer Caroline Gage can be reached at caroline.gage@thecrimson.com.