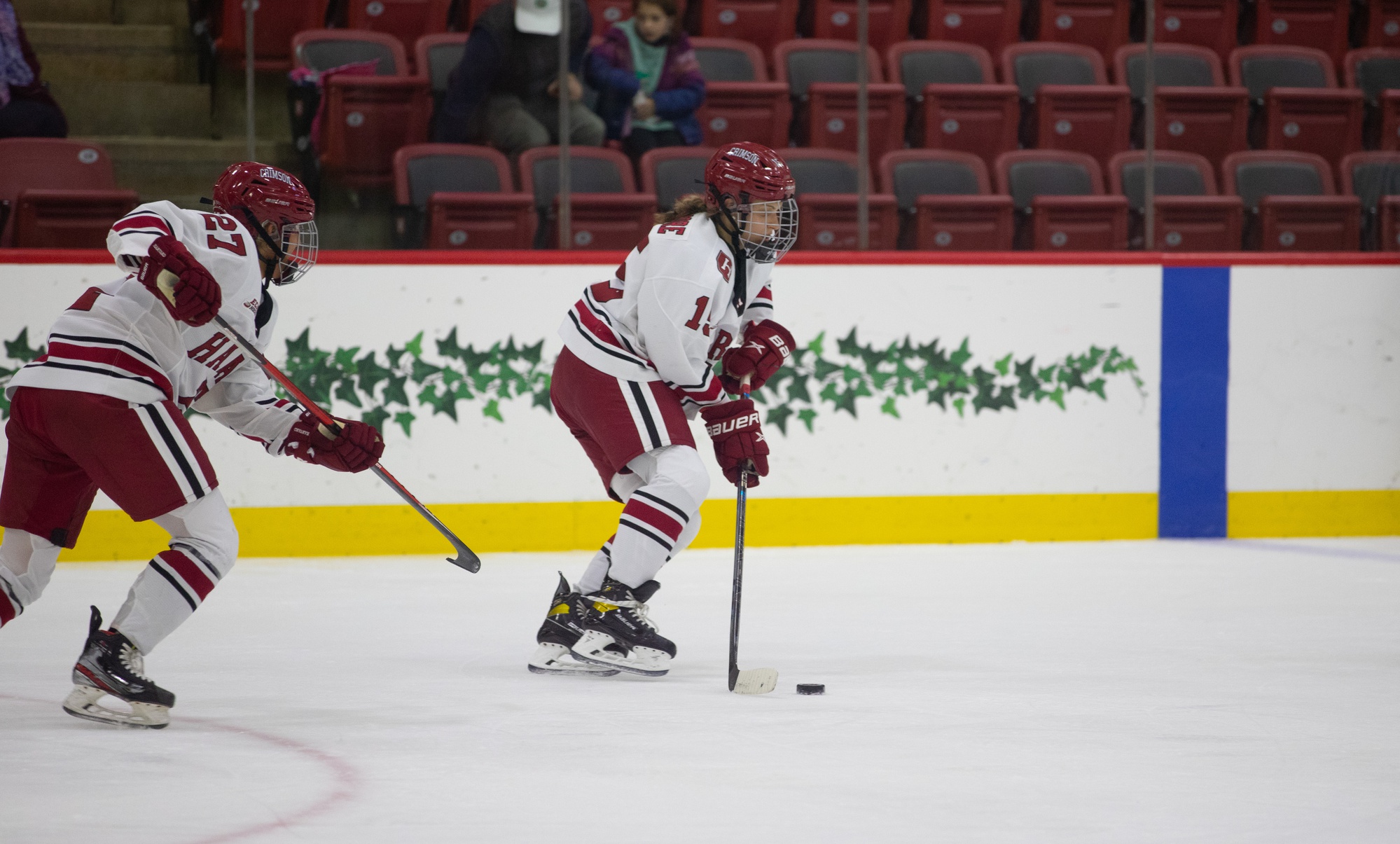 By Shahmir Aziz
The Crimson plays against Colgate on October 30, 2021. The team ultimately lost 4-5 in overtime. By Angela Dela Cruz

Earning the Female Performance of the Year honor for her match-winning performance in the final of the 43rd iteration of the Beanpot Tournament is a fitting curtain call to what has been a stellar, inspirational season for senior forward Becca Gilmore.

MVP of the Beanpot Tournament. Ivy League Player of the Year and All-Ivy First Team. ECAC Player of the Month for February and ECAC All-League Second Team.

Despite winning all these accolades and more, Gilmore, who was Harvard’s leading point scorer for the season with 45 points — the highest for a Harvard player since the 2008-2009 season — thought that the most rewarding and by far the biggest achievement she had this season was the team’s overall success.

The Crimson finished the year 22-10-1 (16-5-1 ECAC) and earned an at-large bid to the Division I NCAA tournament, where they fell to the University of Minnesota Duluth.

“I think our senior class is graduating with how we wanted to leave the Harvard hockey program,” Gilmore reflected. “It was a huge success, and it showed all the work that has been going on for the past four, five years to bring Harvard hockey to the big stage. That was the goal that our class set in freshman year, and it was great to see it all come to fruition and to see the team achieve all that it did.”

With her combined five-point contribution in the Beanpot semifinal and final games, Gilmore was awarded MVP of the prestigious tournament. After playing an integral part in the semifinals with two assists to lead the Crimson to the final, it was on the big stage where Gilmore shone brightest, netting the unforgettable game-winning goal with less than four minutes in the nail-biting final remaining.

In a match which will surely go into the history books as one of the most intense and competitive played in the Beanpot, the score was tied at a stalemate of 4-4 in the last period with the clock ticking and both team’s offenses coming up short in the face of a great display of defense put on by both goaltenders.

With 16:39 to go in the last period, it was Gilmore who finally crossed the blue line on the left side of the ice, went around her marker on the backhand side, dragged the puck back to her forehand, and finished five-hole (in between the legs of the goaltender) for what would be the game-winning score.

For a long seven years prior, Harvard had not managed to bring home the Beanpot trophy, coveted and played for by the most competitive and highly-ranked teams in the Boston area — Boston College, Northeastern University, Boston University, and Harvard. The team finally broke the unfortunate streak this season, as it emerged victorious after a final for the ages, clinched the Crimson’s eighth ever regular-season ECAC crown on the way, and progressed to the NCAA tournament after an equally long hiatus. Harvard not only managed to break its seven-year streak of woes in the Beanpot and reach NCAAs, but it also claimed the Ivy League title for the first time since 2015. 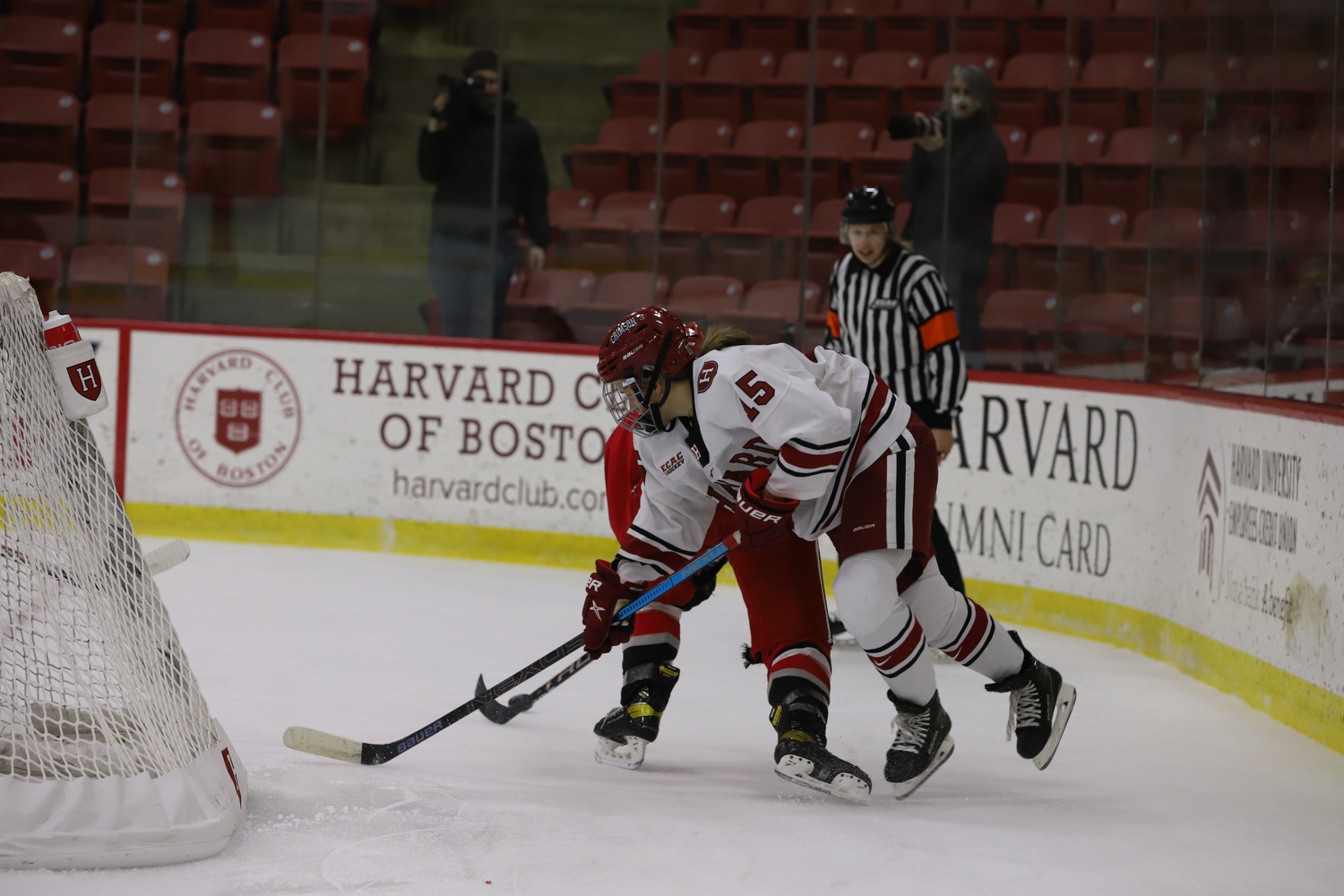 Harvard women's ice hockey goes up against Rensselaer Polytechnic Institute on Dec. 4, 2021. In another nail-biter, the Crimson won 4-3 in overtime. By Angela Dela Cruz

These past seven years have been a series of tough luck, with close finishes ending in defeat, pandemic-induced uncertainty, and a dry spell of no additions to the team’s trophy cabinet. This year, though, was different.

From the very beginning of the season in the fall, there was a distinct hunger and drive which characterized every performance that the Crimson displayed, culminating in its 22-10-1 overall record and 16-5-1 mark in ECAC play. At the very forefront of this galvanized group was Gilmore, who led the team from the front on the ice in every single game. A true team player, Gilmore led the team in assists with a grand total of 26 helpers and was a clinical finisher herself, scoring the game-winning goals on five different occasions and netting a total of 19 pucks over the course of the season.

To perform exceptionally on the biggest stages of college hockey is a feat in itself, but to do so consistently for a whole season truly made Gilmore stand out as a vanguard for the team and a role model for players to follow.

“It’s a long season, and the victories we managed to get are an accomplishment,” Gilmore said. “I think it’s a great lesson for the team and for the future of Harvard hockey. There’s a lot of incredible talent still remaining in the team, and I think they’re going to do great in the years to come.”

Team spirit was something Gilmore valued greatly throughout her tenure with the Crimson, and her performances even before senior year were commendable to say the least. During her junior year, she racked up 24 points, the third highest in the team’s roster, and attended the USA Hockey’s National Team Camp.

When the trailblazing forward was asked what she had to say to the succeeding classes of hockey players, Gilmore offered words of advice and inspiration.

“Continue,” she said. “Continue the tradition of Harvard hockey. This is a saying in our locker room that the tradition lives on in you. It really is bigger than yourself, and the success of the team each year is a reflection of everyone who wore the jersey before you. Continue the tradition, continue having fun, and take care of teammates. These four years go by really fast in the jersey, and success only matters when you love the people you’re doing it with.”

This undying sense of team, fighting spirit, and competition, coupled with her incredible performance in the Beanpot and success in bringing the Crimson back to its glory after an unfortunate dry spell, won Gilmore the Female Performance of the Year.