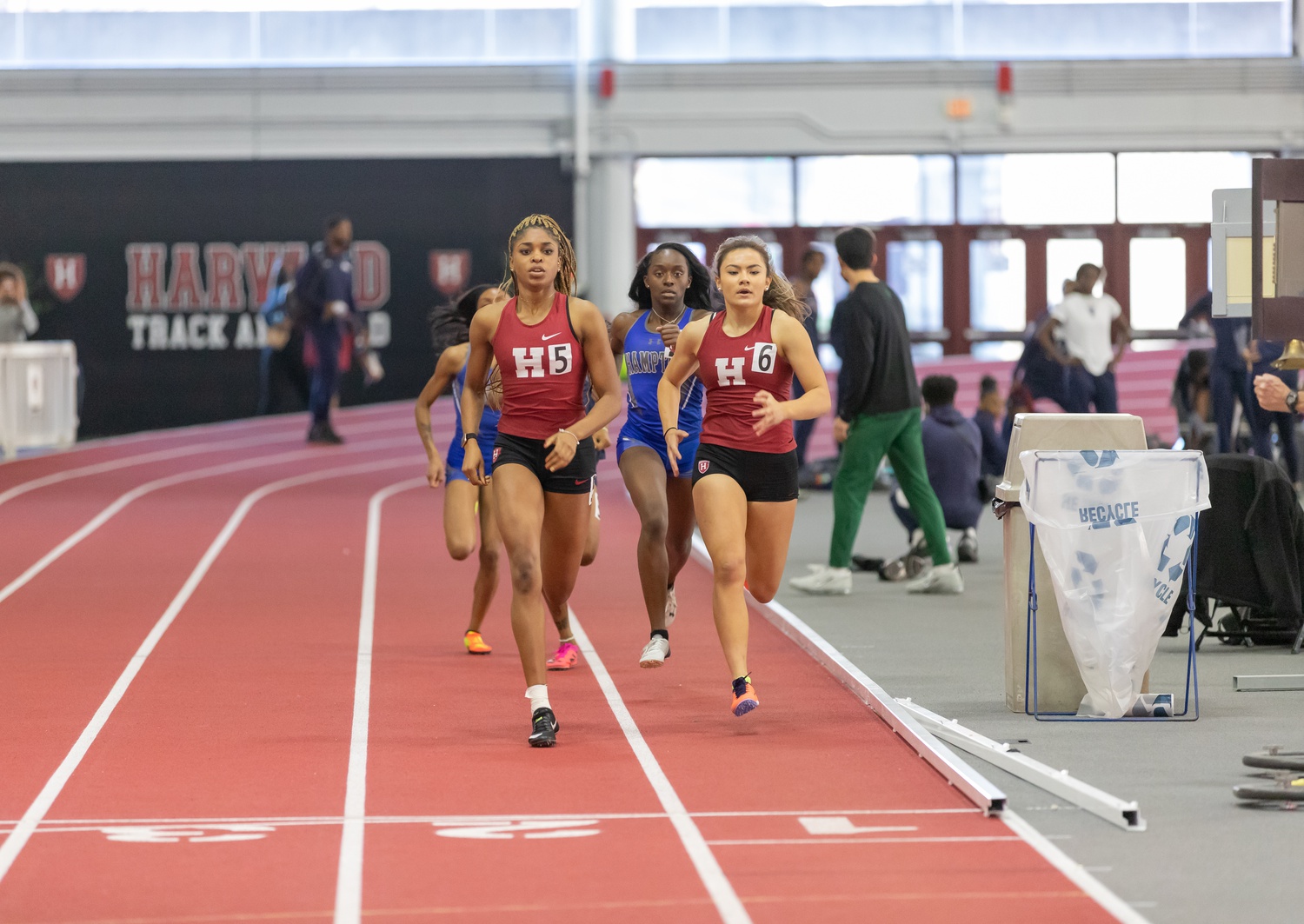 First-year Victoria Bossong and junior Sharelle Samuel compete in the women's 600m race at the indoor track and field meet on Saturday, December 4th. This meet was the first of the season. By Silas Garcia-George
By Sydney Farnham

Harvard Track and Field competed near and far this past weekend. The Crimson continued to impress as it has all season with dominant performances at neighboring MIT’s Sean Collier Invitational, Baylor University's Michael Johnson Invitational, and the Virgina Challenge hosted by the University of Virginia. With the Outdoor Ivy League Championships on the horizon, the team posted multiple marks which leave it among the programs best in recent memory.

Despite the trip getting off to a raining start, the sun came out for Harvard to compete at Clyde Hart Track and Field Stadium in Waco, Texas. On the track, the women's 4x100 team of first-years Victoria Bossong and Eden Finkelstein, sophomore Egbe Ndip-Agbor, and junior Tina Martin ran the seventh fastest time in program history at 3:39.83. In the 100 hurdles, senior Jada Jones made her mark among the Crimson’s greats, running the event in 13.38 seconds. Only one Harvard runner has posted a faster time. The men’s side made sure to keep up with the women’s as first year Daniel Falode took third in triple jump, and the 4x400 team recorded the program’s second fastest time ever in 3:09.81. The team was made up of first year Oliver Murcko and sophomores Peter Diebold, Gregory Lapit, and Lance Ward. Ward, along with senior DeMarkes Stradford, also competed in the 100m dash. Stratford’s time of 10.37 places him at second all-time in program history and eighth at the collegiate level this season. This year is Stradford’s first season with the program. The All-Ivy League wide receiver has spent the majority of his time in Cambridge on the football field.

“I just wanted to come out and be able to contribute to the team in general,” responded Stradford when asked about his performance this weekend and the season as a whole. “Being able to reach the successes that I have has been pretty exciting to see and pretty fun to do, especially with my teammates.”

There was no shortage of sunshine for the Crimson back in Cambridge, either. Down the river at MIT, five Harvard athletes took first in their respective events. On the track, sophomore Jada Johnson ran a personal best time of 14.30 while winning the 100m hurdles. In the field junior Chet Ellis won high jump clearing 6’5”, senior DaLoria Boone won the long jump with a jump of 17'8.75", junior Hannah McLaughlin took first in javelin (120’ 11”), and sophomore Meaghan Toscano won discus (139’7”). Toscano also placed second in shot put, while junior teammate Cammy Garabian came in second in the hammer throw.

At Lannigan Field, Harvard junior throwers Sarah Omoregie and Alexander Kolesnikoff made sure their team would be well represented at the Virginia Challenge. Kolesnikoff threw his second best mark of the spring, launching the shot 63'8¼" to take second. Posting a personal best and achieving the second farthest throw in the women’s team’s history, Omoregie placed fourth in shot put (52’10”). The only Harvard shot putter left between Omoregie and the Crimson record is Olympian Nikki Okwelogu '17.

“It definitely comes down to having a great team environment and having a great training,” Omoregie said. “As an athlete, you can get into your head and put a lot of pressure on yourself. And I think for me, after the pandemic, it was more about just having fun and enjoying the process,so I think that's coming out now with my performances.”

Looking ahead, Harvard is set to compete at the Ivy League Heptagonal Outdoor Track and Field Championships in less than two weeks. For the women’s side, a “triple crown” is on the line. The first and only time the Crimson has won all three Heptagonal Championships (cross country, indoor track, and outdoor track) was during the 2016/2017 season. Olympian Gabby Thomas was a sophomore at the time and won three medals at indoor championships, five at outdoors, and was named performer of the meet. The men’s side is hungry for its first Heptagonal Championship of the year after taking second at both the cross country and indoor championships.

“[Winning an Ivy League Championship] would be the ultimate end to my senior career,” Stradford said. “I always have faith in my teammates and faith in myself and faith in our coaches. I believe it's possible as long as we do what we have to do and just go out there,run fast, and hope for the best because you're the only variable which you can control.”

The Crimson has one last tune-up this weekend before heading to New Haven in the pursuit of a championship. Multiple distance runners will compete at the historic Penn Relays, while others are headed to Stanford for the Payton Jordan Invitational.