One Game Away: Off to a 1-0 Start, Harvard Rugby 15s Have Championship Aspirations in 2022 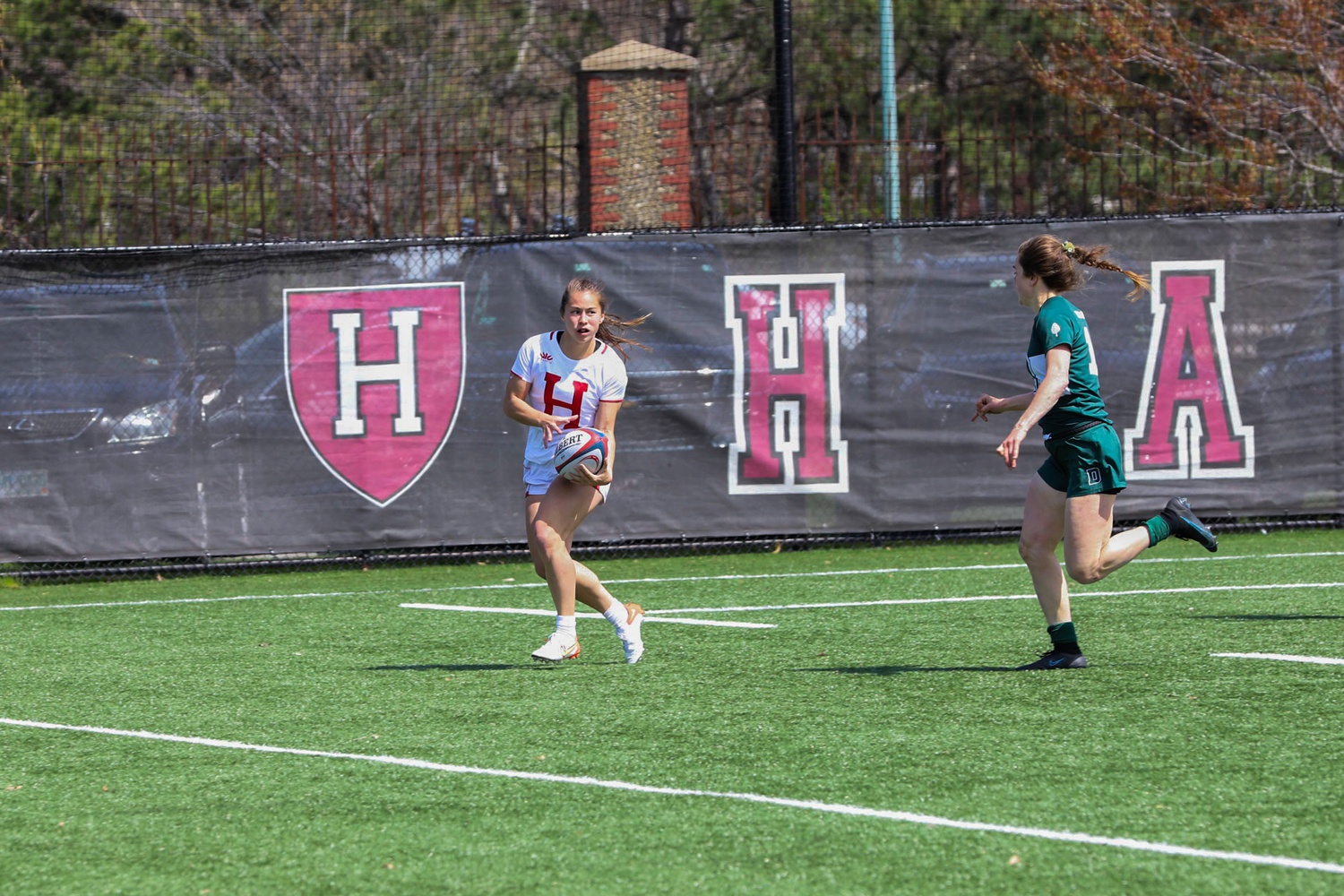 Then-senior Sofie Fella runs with the ball in the Ivy 7s Championship Game against Dartmouth on April 23, a 24-17 victory for the Crimson in which Fella scored two tries. By Owen A. Berger
By Mimi S. Koenig, Crimson Staff Writer

The women’s Rugby 15s team was back in action this past weekend, kicking off its 2022 campaign with a 48-19 win over Quinnipiac. Coming off a third place finish at the NIRA National Championships last fall, the Crimson rolled in its first game back at Mignone Field, setting the tone for what promises to be an exciting season ahead.

“I think we had a good start to the season,” said sophomore fullback/wing Chloe Headland after the game. “Everything went well. We executed what we wanted to execute. Obviously, the win is a big outcome.”

Harvard started the day off strong, using solid team defense and relentless pressure on offense to shoot out to a 31-0 lead behind tries from a trio of first-years – Lennox Landon, Cameron Fields and Tiana Padhilla. However, despite the lopsided score, the game was far from over. The Bobcats, fresh off a 47-14 drubbing of Brown on Sept. 3, readjusted at the half, and behind improved all-around defense and renewed vigor on offense, were able to cut the lead to 31-19. The Crimson recovered swiftly, and tries by Fields, senior scrumhalf Cassidy Bargell and sophomore fullback/wing Chloe Headland put the score out of reach at 48-19.

Headland also cited the great potential for growth going forward. “We’re excited to see ourselves grow more than anything from that game,” she said. “Obviously, we’re always looking to build our basic game. The basic plays of rugby and just improving our own personal ability. That’s always been a big focus of our team, you know, being the best of yourself…We fine tune everything that went well and we see what else can be done so as it goes on, by the end of it we’re hitting our max.”

A strong team showing was highlighted by standout performances from the first-year class. Back row/wing London showed out in her first career home game with three first half tries, while outside back Fields and center/fullback Padhilla added tries of their own. London, Fields, and Padhilla’s quick assimilation bodes well going forward in a season where the team is welcoming ten new recruits, as well as two walk-ons. 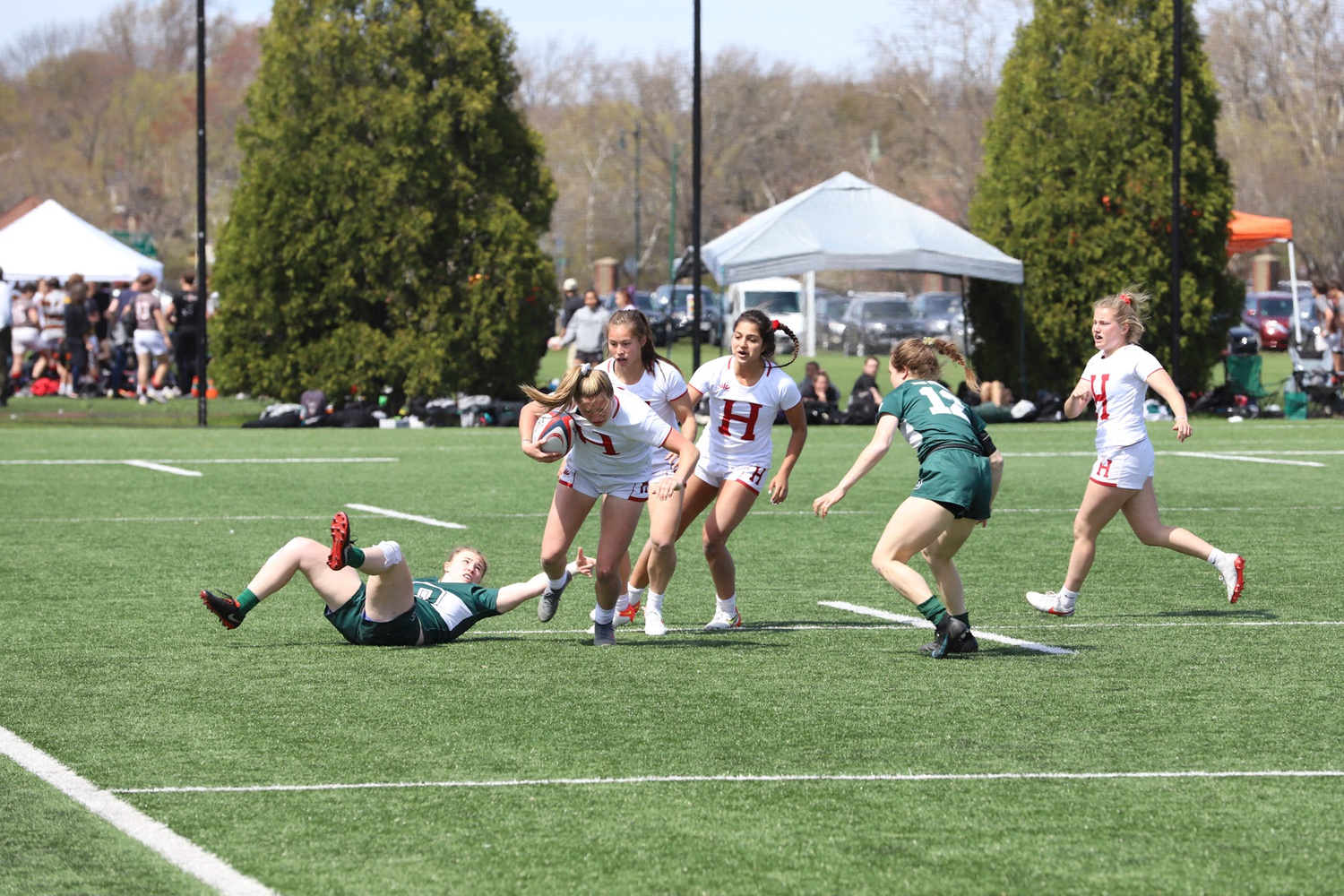 A Harvard women's rugby player evades a Dartmouth tackler in a 24-17 victory in the championship game of the Ivy 7s tournament on April 23 at Mignone Field. By Owen A. Berger

“The incoming class has been absolutely awesome,” she said about first-year performance in the game. “They came on and they’re all so eager to wear the jersey and I think we saw that on the weekend with how well they all did….Just playing their game and being able to control it and working with those who are next to them…It’s pretty exciting to see what that class is gonna do. It’s a big class but it’s definitely a very very talented class.”

Looking forward, the Crimson has high hopes for the coming season. The 15s’ third-place finish at Nationals and a second-place finish in the Ivy League, as well as a USA Rugby 7s National Championships semifinal appearance and Ivy League 7s tournament championship for the 7s in the spring has left the program eager to continue its string of success.

“Last year was a good year. We made it to the [semifinals],” said Headland of the team’s expectations this season. “I think the team overall was a little disappointed that it wasn’t a final finish, because at the end of the day, we all hope to make it to the final. So everything, all the work we put in, all of that, it goes into playing in that final game, whether that be a first-place finish or a second-place finish, so it's definitely the same [expectation] this year.”

If Harvard can advance that far, the 2022 NIRA National Championship Semifinals will take place the weekend of Nov. 12 with that coveted title game the following Saturday.

The 2022 campaign marks a milestone for the women’s rugby program, as it celebrates its 40th season across club and varsity levels this year. The Crimsonwill host Princeton in its alumni game on Sept. 24, when it is expected to draw a significant crowd.

Harvard plays again this Saturday, Sept. 17, away against Mount St. Mary’s in Emmetsburg, Md. at 12 p.m.

–Staff writer Mimi S. Koenig can be reached at miriam.koenig@thecrimson.com.