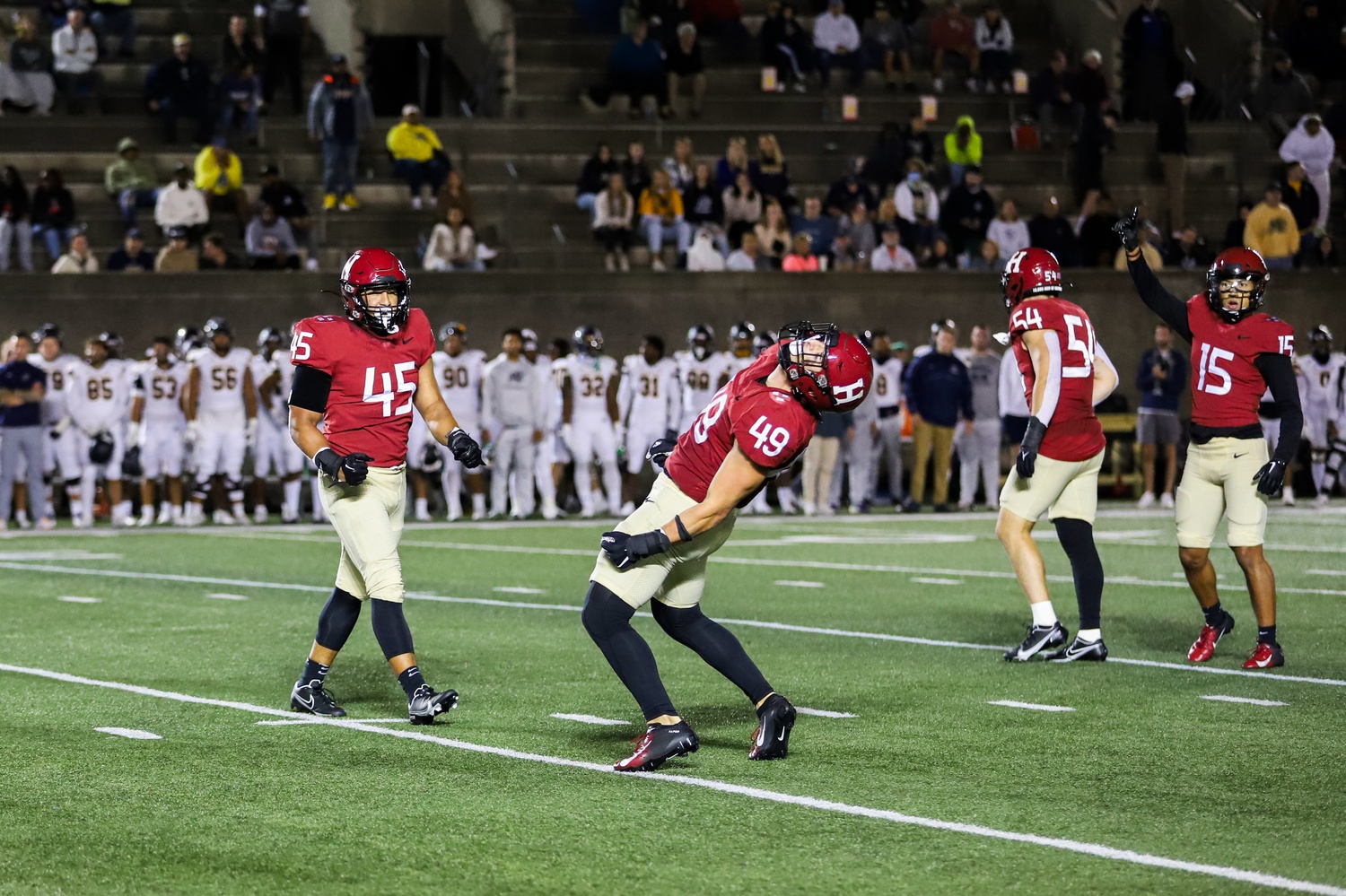 One year ago Saturday, Brown (1-0, 0-0) traveled to Harvard Stadium for the Ivy League opener in its 2021 season, and the large contingent of Harvard (1-0, 0-0) fans in attendance at the game were treated to a blowout, as the hosts came out victorious, 49-17. The rivals will face off again on Saturday, this time in Providence, R.I., at 12:30 p.m., and despite last year’s lopsided result last year and Harvard’s historic success against the Bears – the Crimson hold an 88-30-2 record all-time in the series – senior running back Aidan Borguet expects a new challenge.

“Absolutely not,” answered Borguet when asked whether last year’s game impacted his team’s mentality entering the contest. “This is a new team. We’re a new team, and we have to prepare for Brown just as we would any other team, any other week, and that’s with a clean slate…They’re a hungry team.”

This Brown team joined most of its Ivy League counterparts in victory last week (Yale was the lone Ivy to lose last weekend in its season opener) by eking out a 44-38, double-overtime shootout against Bryant at home. Junior quarterback and Everett, Mass. native Jake Willcox played tenaciously for the Bears, who trailed for most of the game but patiently chipped away at the Bulldogs’ lead. The Brown running back corps provided a spark when needed as well, with sophomore Jordan DeLucia blazing past the defense for a 50-yard score in the first quarter and senior Allen Smith hitting paydirt for the winning score in the second overtime.

Harvard also enters the game undefeated after a furious fourth-quarter comeback and a 25-yard score on the first play of overtime led to a 28-21 overtime victory over Merrimack, which put up a valiant effort in the first-ever contest between the two schools. The defense was stellar, recording nine sacks and holding the Warriors to negative-26 rushing yards, giving the offense its chance to rally. Borguet scored the Crimson’s final three touchdowns, including a 48-yard rush with fewer than five minutes remaining that cut the deficit to one score. A Second-Team All-Ivy selection in his sophomore campaign, he is off to a great start in his senior season, as he earned Ivy League Offensive Player of the Week for his efforts. After his offense was held to seven points in the first 55 minutes of game play on Friday, Borguet expects more urgency from Harvard on Saturday.

“We have leaders all around the team that are urging us to start fast,” he said. “We want to get up and play the way we want to early in the game so we can get the ball rolling early and then continue that the rest of the game.”

In the Ivy League, known for its emphasis on stopping the run – through one week of games, the top four rushing defenses in FCS all play in the Ancient Eight – Harvard’s chances of winning will largely depend on Borguet. In his award-winning week, the senior took his 20 carries for 127 yards and two scores, and added another two catches, 39 yards, and a touchdown as a pass-catcher. After recording just six receptions through his first two collegiate seasons, Borguet’s getting more involved in the passing game could prove a key new element to offensive coordinator Mickey Fein’s unit this season. Likewise, for the star to find holes to run through, the offensive line will have to be stouter than it was against Merrimack, when the Warriors’ front seven hurried senior quarterback Charlie Dean five times. 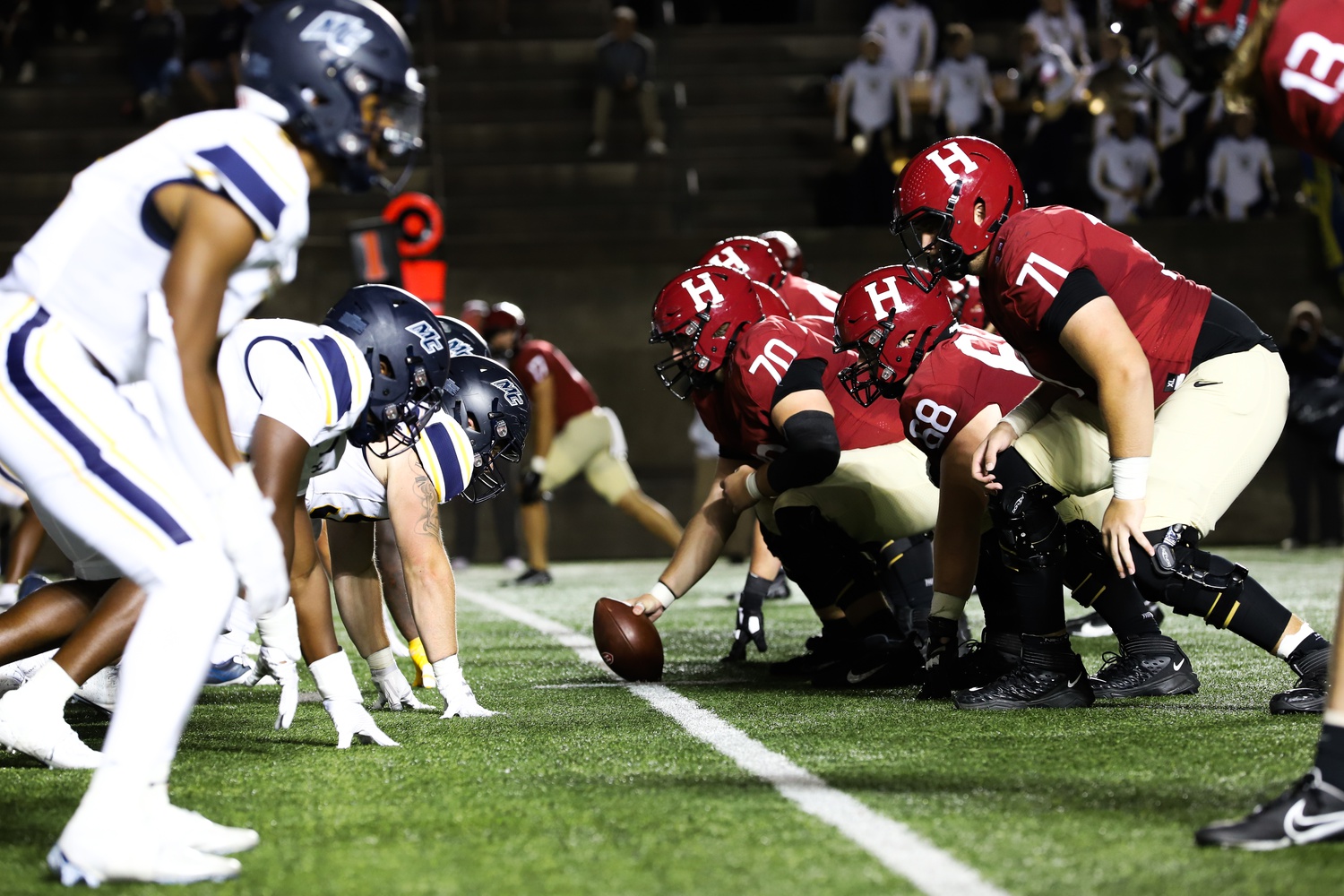 Senior offensive lineman Scott Elliott prepares to snap the ball to senior quarterback Charlie Dean in Friday's win over Merrimack. Elliott and the offensive line will be charged with protecting Dean and opening up holes for senior running back Aidan Borguet on Saturday. By Josie W. Chen

Last season, the Crimson heavily relied on the rush, but when it takes to the air, its hopes will rest on the shoulders of Dean. The Odessa, Fla. native started five games last season before suffering an injury in the Princeton contest, and he was choppy in his return to action, completing 18 of his 35 passes for 166 yards while throwing two interceptions. However, he was better in the fourth quarter and overtime, completing a 35-yard strike late in the game to senior wide receiver Kym Wimberly. Beyond Wimberly, Dean will have a large and diverse set of options to throw to: sophomore wide receiver Ledger Hatch and junior wide receiver Kaedyn Odermann are jump-ball threats, and a pair of tight ends – junior Tyler Neville and senior Haven Montefalco – made important contributions against Merrimack.

Hatch, Odermann, Neville, and Montefalco will need to use their size to their advantage against Brown, which boasts a large and athletic defense. Almost all of the Bears’ starters stand over six feet tall, and one of the only players who does not – five-foot-ten senior outside linebacker and captain Junior Gafa – is arguably the best player on the team, as he was an All-Ivy League Second Team selection in 2021. Last weekend against Bryant, Gafa recorded two hurries against Bulldogs’ quarterback Zevi Eckhaus, and tied for second on the team with five tackles. The Bears’ defense also excels at forcing turnovers, for senior safety Harrison Ochs and senior defensive back Cooper DeVeau each notched an interception. Junior defensive lineman Terrence Lane II recorded Brown’s only sack last week.

“They are a well-coached team that flies around and plays good football,” Borguet said. “So I think we try to focus on what we can do to the best of our ability and our coaching staff has really harped on that, about playing our best football.”

On the defensive side, the Crimson will try to leverage its experience and pedigree to contain Willcox and head coach James Perry’s deep stable of ball carriers. In the secondary, senior defensive back James Herring and senior linebacker Jack McGowan will try to follow up a relatively pedestrian game against Merrimack, in which the pass defense allowed 309 yards through the air, by clamping down on Bears receivers Graham Walker and Wes Rockett. Walker, who stands at 6’3” and torched Bryant for 116 yards last week, will be a tough task to cover, but Harvard will still look to return to its ball-hawking ways of last season — in seven Ivy League games last year, the Crimson had 11 interceptions — at the Bears’ expense. 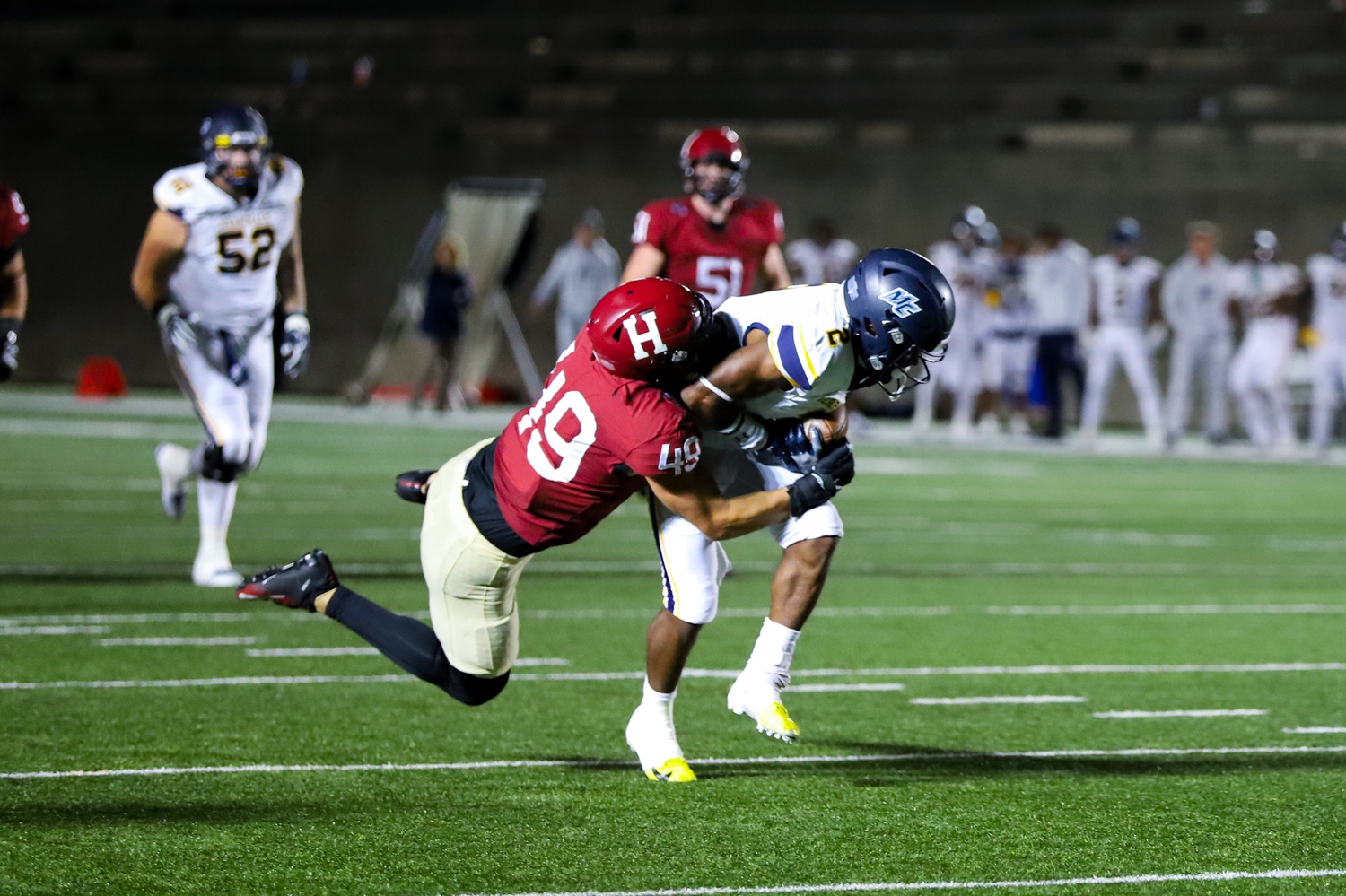 Hudson came up clutch again later in Friday's win over Merrimack, as well, bringing down the Warriors' Jacari Carter. Hudson and the linebacker corps will need to perform well for the Crimson to succeed against Brown and running back Jordan DeLucia. By Josie W. Chen

The run defense will be expected to continue its stout play, even against a strong crop of running backs headlined by Smith, DeLucia, and sophomore back Stockton Owen. Two of Harvard’s premier run-stuffers, senior defensive lineman Nate Leskovec and junior defensive tackle Thor Griffith, will arrive in Providence with some new accolades and sterling Week 1 performances to build on. Senior lineman Leskovec, who had a school-record 4.5 sacks against Merrimack last Friday, took home the NCAA FCS Player of the Week award, while Griffith led the team with nine tackles (four for a loss) last week and earned an Honorable Mention for that award. Looking at the Brown contest, Leskovec still sees room for improvement in his individual approach.

“For me over these next couple of games, it’s really about settling down and really honing in on my techniques, and not just flying around with my head cut off like I did last game,” he said.

While Leskovec’s head-flying-around mindset still seemed to yield dividends against the Warriors, he signaled that the Crimson might be in for a different type of challenge against the Bears, a schematic one.

“We’ll put extra emphasis on the different types of schemes and places they run because they’re a little unique,” Leskovec said. “They’ll stay with the run game because that’s kind of what they have to do to set up some of the other plays in their playbook.”

Harvard will look to put together a full-team effort on Saturday and show that it has fully shaken off its offensive rust. Last season, the Crimson put up 30 or more points in four of its first five games and won all of those contests, but this season it remains to be seen if the team will be more reliant on its premier defense to close out games. With senior defensive lineman Truman Jones serving as the 148th Captain of Harvard Football this season, it isn’t hard to envision the unit emerging as the team’s emotional engine.

Saturday’s game will have a special aura around it, as it marks the opening game of conference play for both teams. Historically, the Crimson is 22-5 in its Ivy League season openers under head coach Tim Murphy, who, in his 28th season on the sidelines, is the winningest head coach in Ivy League history. Getting off to a 1-0 start in Providence would be an important first step in Harvard’s quest to win its first conference title since 2015. But Leskovec and the rest of the squad aren’t getting ahead of themselves just yet.

“We have a long way to go,” the senior defender said. “Hopefully, toward the end of the season, we play hard, fast, physical football and we like where we end up.”

–Staff writer Jack Silvers can be reached at jack.silvers@thecrimson.com.