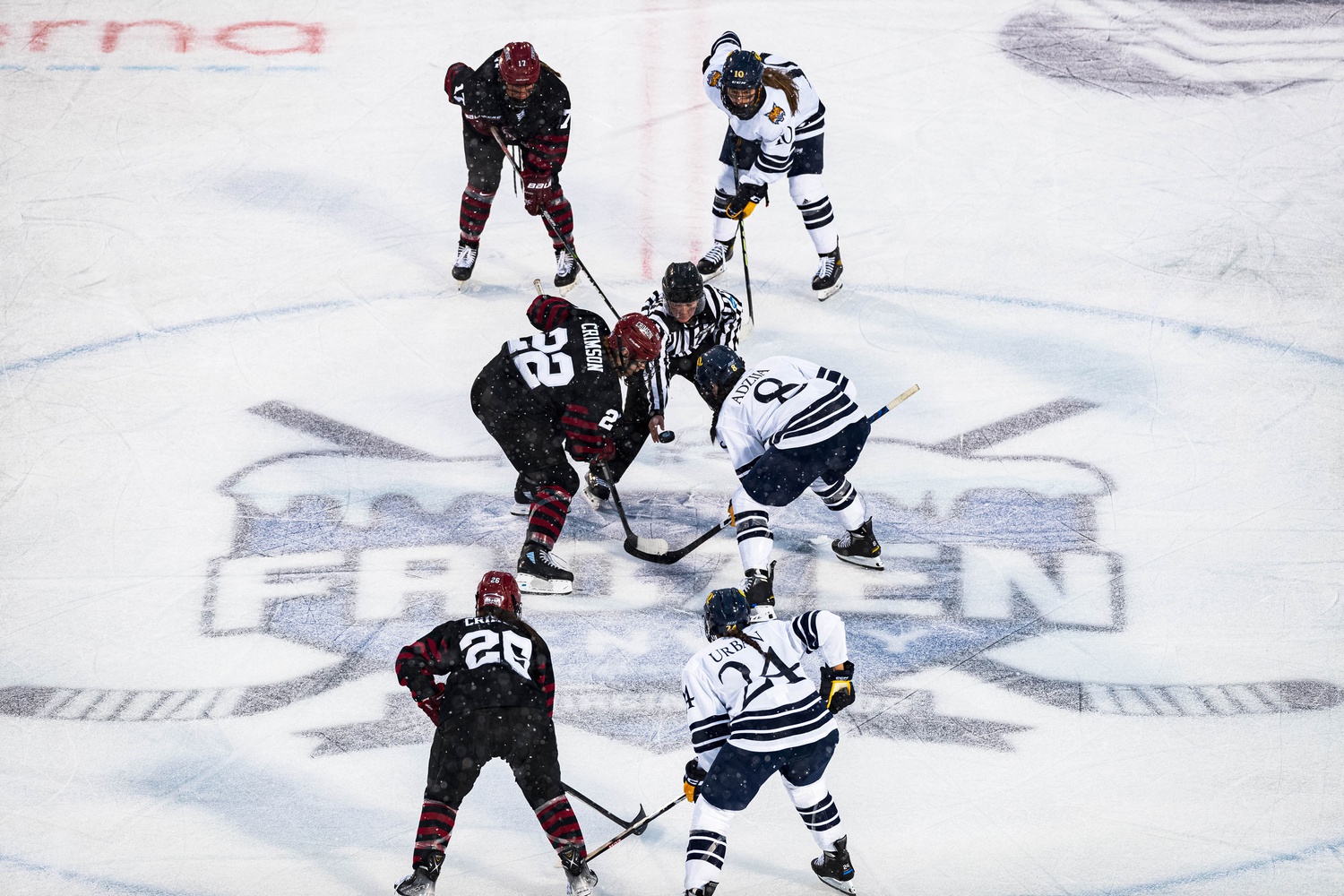 To kick off the second half of the season, the Harvard women’s ice hockey team (4-9-2, 3-6-2 ECAC) traveled across the river to MLB’s oldest active ballpark — Fenway Park — to face No. 4/3 Quinnipiac (19-3-0, 9-1-0) at Frozen Fenway 2023. When the teams last met in mid-October, the Bobcats cruised to a 5-2 win. The Crimson entered this matchup not having seen live action since its Dec. 3 win over St. Lawrence; meanwhile, the Bobcats were fresh off of a victory versus No. 2/2 Wisconsin on New Year’s Day. After a back-and-forth first period, Quinnipiac’s goal in the second period would prove to be the game-winner as the Bobcats defeated the Crimson 3-1.

While the NHL Winter Classic — played on the same ice four days earlier between the Boston Bruins and Pittsburgh Penguins — featured temperatures in the 50s, Frozen Fenway 2023 had no problems living up to its name. At puck drop on January 6th, temperatures were in the low 30s and sleeting. However, as the game entered the second intermission, the sleet turned to heavy snow, keeping the ice crew busy throughout the third period.

For the coaches, the weather affected strategy. “After the first period, we were trying to make some adjustments to play a lot more simple, make a lot less passes,” said Quinnipiac head coach Cassandra Turner.

But for those on the ice, the weather only added to the magic of the moment. “I wouldn’t want to play any other way,” junior forward Shannon Hollands said.

The inability to capitalize on momentum plagued Harvard throughout the contest. In the opening minutes of the first period, both teams generated good chances, but neither one converted those opportunities into a goal. The Crimson had a good opportunity to notch the first goal as it went on the power play following a tripping call against Bobcats defender Zoe Boyd three minutes into the first — but it was Quinnipiac who struck first. Forward Olivia Mobley gave the Bobcats an early 1-0 advantage with a shorthanded score following a Harvard turnover in the neutral zone.

In the second period, the Crimson was unable to capitalize on the play of sophomore goalie Alex Pellicci. Despite an immense 18-save effort from Pellicci in the second frame, Harvard found itself facing a two-goal deficit at the end of the second. Quinnipiac extended its lead with five minutes remaining in the second thanks to a goal from forward Nina Steigauf. Steigauf redirected a high shot into the back of the net with a strike that was inches away from being a high stick. “We gave her a whole lot of action, and [we] would have liked to play a little bit better in front of her,” said Harvard head coach Katey Stone.

The Crimson started the third period scorching hot with an early goal. The goal by Hollands cut the deficit to two and energized the Harvard squad. The nifty goal came off a long pass from sophomore forward Paige Lester. For Hollands, the finish was simple: “I just saw an open side far, shot, and there it was.” The goal comes in a season where Hollands has increased her offensive output, averaging 2.0 shots a game this season, up from 1.4 a year ago. “That’s definitely one of my goals going into this season,” said Hollands about getting more points on the board. [I’m] just trying to focus on getting any pucks to the net.”

However, the Crimson could not sustain any momentum, as the Bobcats answered back with a score by Madison Chantler 48 seconds later. The goal was Chantler’s ninth of the season and salted the game away.

On the offensive side of the puck, Harvard generated many quality chances but failed to convert them into tallies on the scoreboard. With two minutes left in the first period, Anne Bloomer almost tied the game with a shorthanded goal. After being set up with a perfect bounce pass off the boards, Bloomer had a breakaway opportunity, but the goal was not to be as Quinnipiac senior goalie Logan Angers made the save. Currently, Angers holds the 5th-best goals-against-average in NCAA Division I Women’s Ice Hockey at 1.364 and the 7th-best goalie-winning percentage at 0.786.

Through the first 20 minutes, the Harvard offense stood tall as it matched the shot total of Quinnipiac, which currently has the sixth-best scoring offense in the nation. The Crimson launched 37 shots on net in the contest, the third most it has all season.

Regardless of the outcome, neither team minimized what it meant to play at Fenway. “Definitely number one, that’s for sure,” said Hollands about where scoring at Fenway ranks in her career accomplishments. “This has got to be the top; I don’t even think it’s really close,” Angers said.

Harvard will look to rebound in its matchup against ECAC and Ivy League foe Princeton (8-6-1, 4-5-0) on Jan. 7. The midseason tilt will be critical as the two teams seek to move up from the middle of the ECAC table. The matchup will also be the first between the two teams since the Tigers upset the first-seeded Crimson in the first round of last year’s ECAC playoffs.